Fished a half-day morning trip at Belton today. Things were a bit slow, but we made up for in quality fish what we lacked in quantity.

Skies: Skies were clear at sunrise and until around 11a. At this time, some high thin clouds began to build in from the north, and over the next hour grew thick enough to prevent shadows from being cast.

Prior to sunrise, several flocks of gulls were working over open water between Areas 211 and 310, but, given their speed and posture, I could tell they were only sipping shad and were not on top of schooled fish.

After watching these gulls for a while, nothing materialized, and so I moved on.

I first contacted fish at Area 328 boating 4 white bass and 1 barely legal largemouth. All were pretty sluggish in responding to a lift-drop presentation.

I then headed to Area 174 and caught 2 white bass and 1 small largemouth on downrigger using a White Willow spoon in 16-18′. Things were pretty slow here, too.

Moved on to Area 327 just as the wind began to slacken and go NW, and as the cloud cover began to roll in. While going over this area thoroughly with sonar, I noted a lot of bait, and then found fish in 27-31 feet both tight to bottom, as well as suspended in the lower 1/2 of the water column. All told, I managed 21 fish here including 2 back-to-back largemouth (PICTURED BELOW)with the largest of the two going exactly 6.0 pounds. I also caught 2 crappie right off the bottom which went 1.5 pounds each, as well as 1 drum, and 1 short hybrid. The remainder was all white bass right at the 11 inch mark.

As I wrapped up the trip, I was assisted in getting the necessary witnesses to the weighing of the potential lake record white bass by Randy McCurley of Flower Mound and by Matthew Perrine of Temple. Thank you both very much, fellows!

TALLY = 30 FISH (all caught and released. 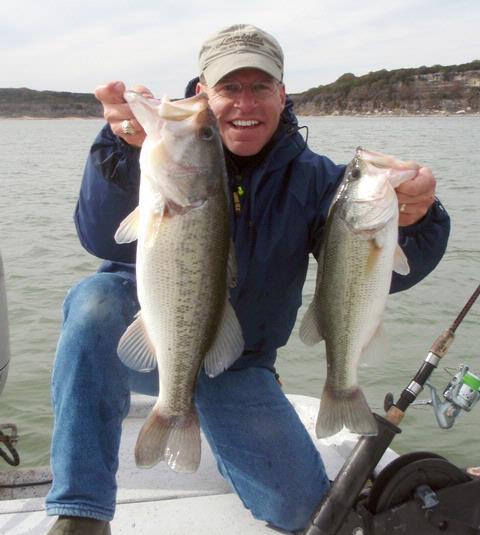