Fished a half-day morning trip at Stillhouse today. Things were a bit slow at first as the winds were slack and the skies were bright and clear, but then things heated up.


Wind: Winds were slack at sunrise, but quickly built to 5-7 mph and came from the WSW.

Skies: Skies were clear and bright all day.

Made just one stop today after cruising for about 30 minutes looking for bird activity.


Found about 8 gulls and 4-5 terns all working together over 29-34 feet of water, and strung along from W to E from Area 176 through Area 243, and on to Area 186. These fish were really cranked up today, as is often the case with a west wind. At first, more fish were found suspended at around 12-17 feet deep. As the skies brightened, they pushed down and were more prevalent on bottom. By around 10:30, the fish began to transition off the flat and toward the deeper breakline. From that point, they suspended within 4-6 feet of bottom and stayed heavily concentrated and nearly immobile, allowing one fish after another to be taken on a well-placed slab.

In all I caught 96 fish including 1 drum, 5 largemouth bass, and 90 white bass. All the whites went 10 to 12 inches, with most right at 11.5 inches. The catch included one really nice largemouth tipping the scales at exactly 8.00 pounds. (PHOTO BELOW) 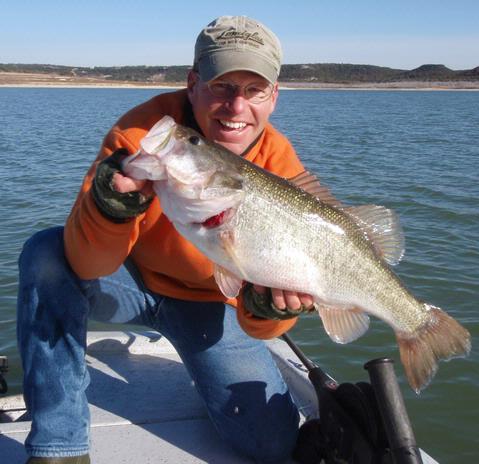