I fished a “Kids Fish, Too!” trip today with Steve, Debbie, Aaron, and Jordan U. of Troy, TX. Steve was back home on leave from Iraq and looked me up on the internet while serving in Southwest Asia. 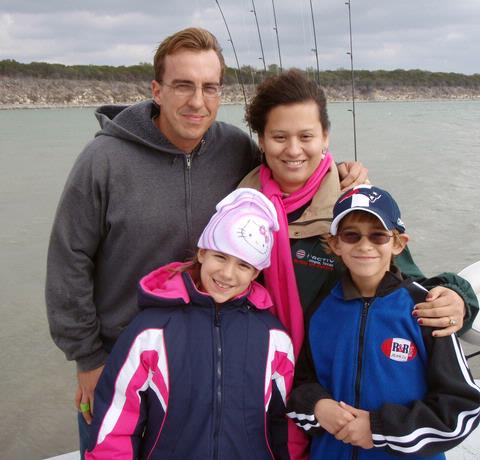 
Air Temp: 68F at sunrise (obscured by clouds), warming to mid 70’s due to pre-frontal warming in advance of a mild cold front due in tomorrow.


Wind: Winds were already up at sunrise at 10-12, slowly increasing to 30mph with gusts over 40mph by noon and into the afternoon.

Skies: Skies were cloudy and grey until around 11:30, then cleared to partly cloudy and brightened.

After meeting, launching, and going over safety concerns, we headed to the Area 54 complex and looked for birds to lead the way to fish. There were about 10 large herring gulls and 2-3 terns circling up high around 7:40. They got lower to the water and more fidgety as the next 45 minutes rolled by. During this entire time, we downrigged with White Willow spoons while I closely monitored the birds and sonar. The fish were kind of sluggish all day, but were feeding, albeit reluctantly. We bagged 8 fish in this area including 6 whites and 2 largemouth with 3 additional fish lost. Once the birds disappeared and the action died down, we headed out to search for more birds. 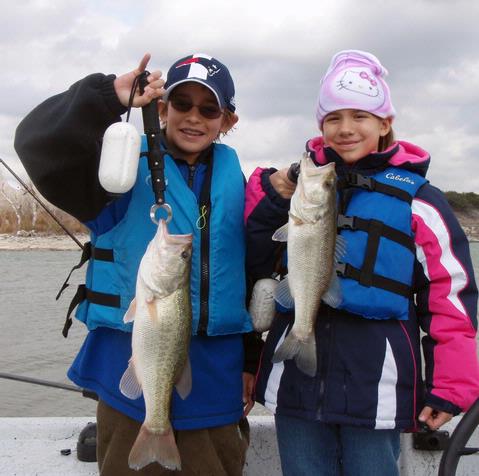 We found an aggressively feeding flock of terns working over a deep flat in 45′ of water at Area 338 to Area 339. The kids were anxious to try something new, so we rigged up with slabs and went to town vertical jigging. By this time the wind was over 20 with higher gusts, and it was all I could do to keep the boat in a hover over fish, and help Aaron and Jordan get the hang of slabbing. They were fast learners, and soon Steve and both kids were picking up fish now and then. The combination of light-biting fish, wind, and depth made strike detection very difficult. Nonetheless, by the time the wind drove us off, we’d managed 11 more fish here with several more missed. The missed fish all came when the kids didn’t realize a fish was hooked and dropped their rod tip in keeping with the vertical jigging rhythm they’d become accustomed to. This allowed some slack in the line which, combined with heavy slabs, allow the hook to pull out. I tried downsizing to the 1/4 oz. Rattle Snakie, but switched back to the TNT 180 just so everyone could stay in touch with their lure.

We then moved on to Area 330 to try to escape the wind. As we pulled up, about 9 terns were just beginning to work this area over. The easier wind conditions, shallower water (~22 feet) and a little hard-won experience now paid off. The group managed 9 more fish in just 20 minutes of slabbing here. After things slowed down and the birds left, we agreed to call it a great day, and by far the most productive day this family had ever enjoyed! We headed back to the dock at 11:30 with 28 fish tallied for my guests.

Afterwards, I headed back out to Area 330 to run sonar and see how far and wide these fish were spread. I found fish from 18 to 22 feet from Area 100 to Area 330, and from Area 330 to the SW toward the channel. I caught 3 more fish as I jigged to confirm sonar. By now the winds were approaching 40 and I left while I could still get my boat on the trailer.

TALLY = 31 FISH, all caught and released