WHO I FISHED WITH:   This morning, Wednesday, July 25th, I fished a “Kids Fish, Too!” trip with the Capner siblings including Alden (age 10), Elijah (age 9), Jasmine (age 9), and Trinity (age 6).  Mr. De Carson of Temple, TX, is friends with the kids’ grandparents and offered to treat the kids to a morning fishing trip while their grandparents volunteered in a ministry they all serve at.

My “Kids Fish, Too!” trips are intended just for kids (only), although parents, grandparents, chaperones, etc. are welcome to come along to assist me.  These trips are less expensive than adult trips, they are shorter than adult trips, and we focus on quantity over quality, hence, sunfish are a part of our quarry on most Kids Fish, Too! trips.  These are just right for elementary-aged kids and their shorter attention spans and (typically) limited prior experience.  The summer break from June through August is the best time for taking younger kids, although our mild central Texas climate typically produces kid-friendly fishing right on into early October. 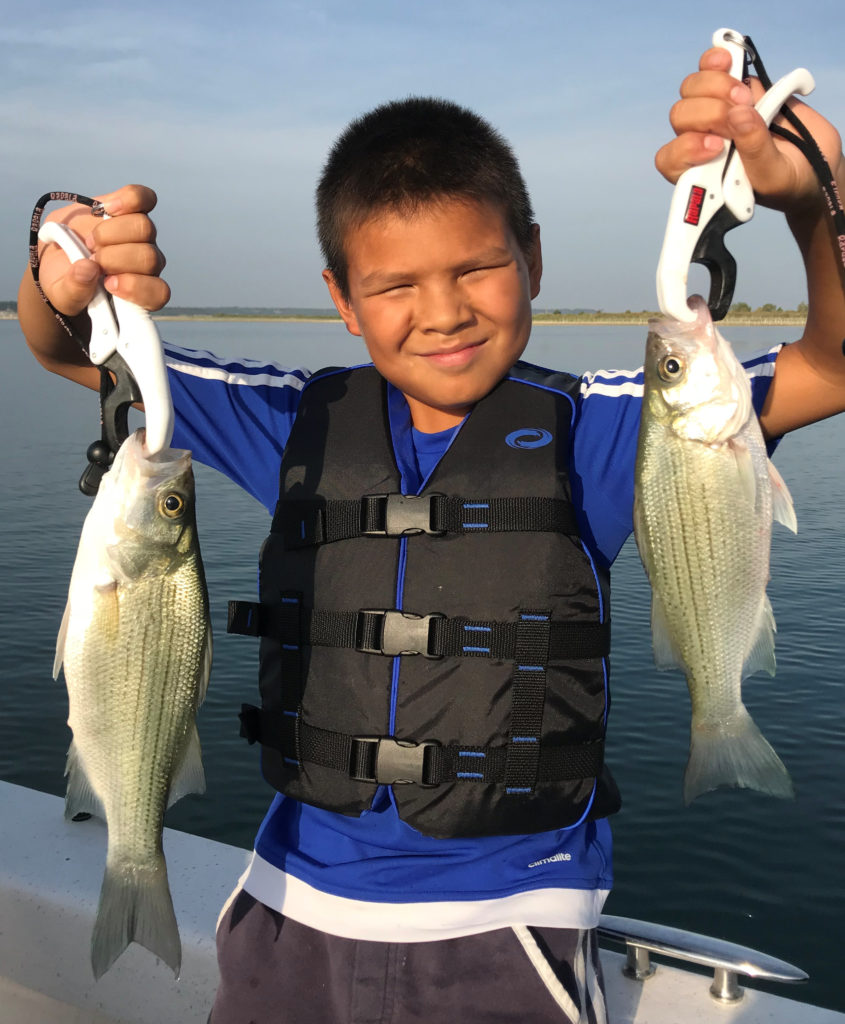 Oldest brother Alden, age 10, with two of the 76 fish he and his siblings landed on this morning’s Kids Fish, Too! trip to Stillhouse Hollow Reservoir.  These two fish were part of a “triple” Alden landed (three fish at one time, each on one of the three Pet Spoons on our downrigged umbrella rig). 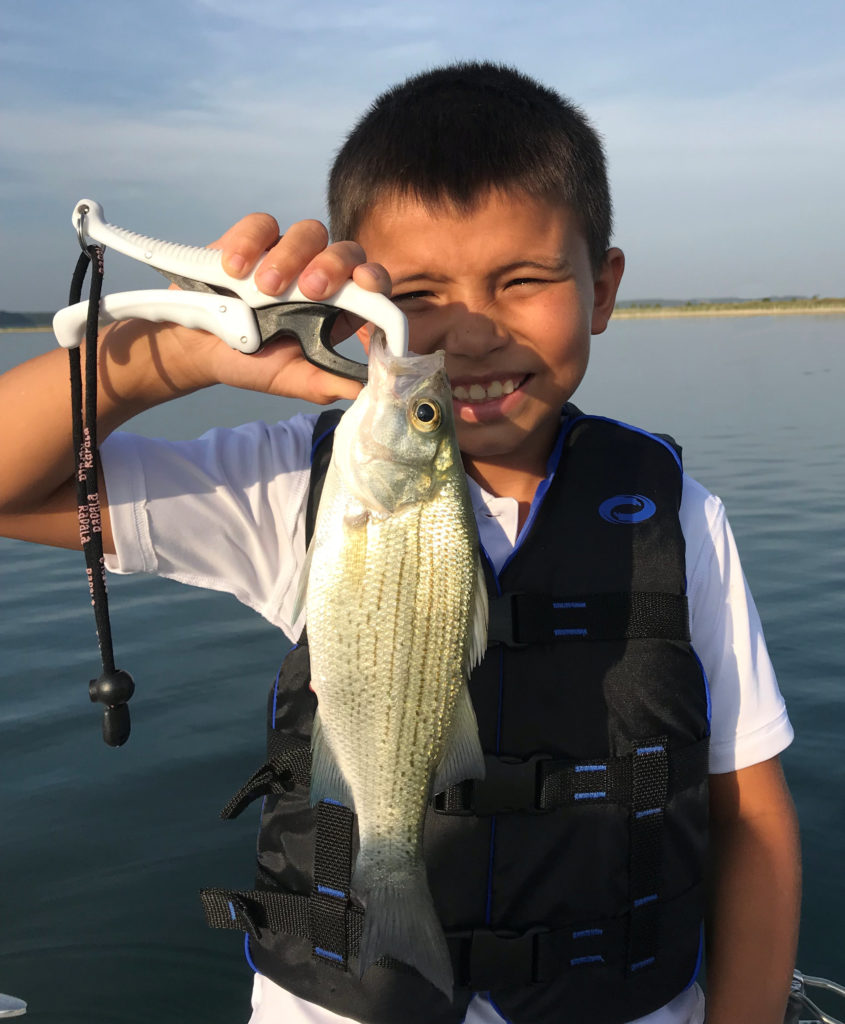 Elijah, age 9, chipped in with a mess of white bass and sunfish of his own.  Elijah really excelled at vertical jigging as he kept focused and got the hang of the retrieval cadence right off the bat. 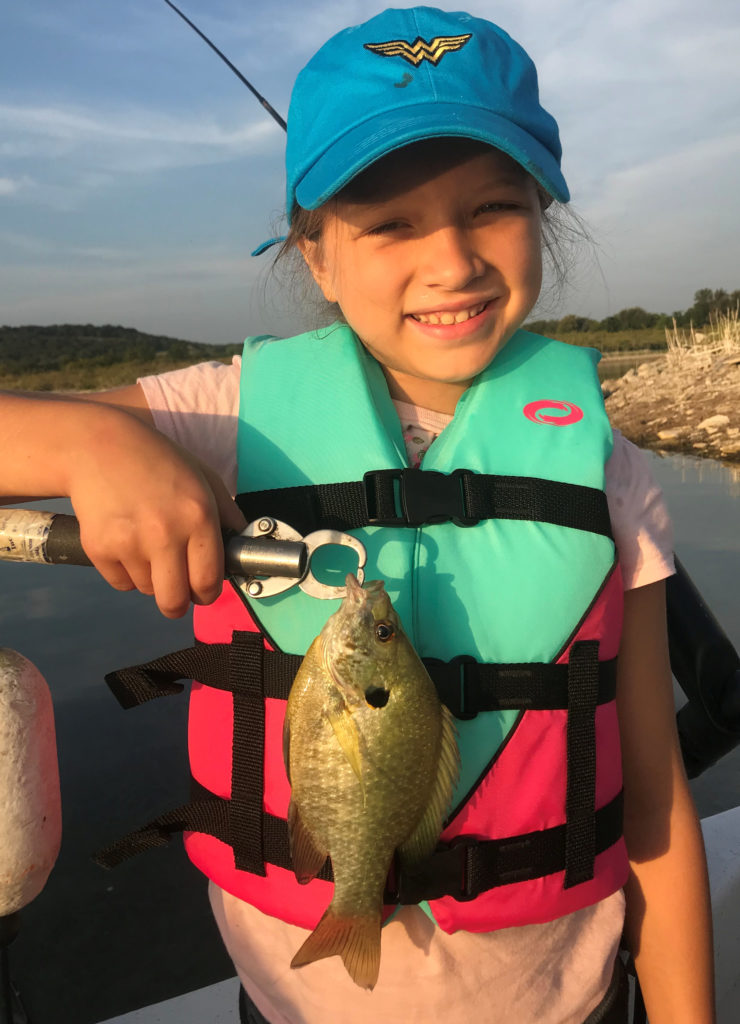 Jasmine, age 9, landed the largest of our 40 sunfish with this nice bluegill/redear hybridized sunfish which went 7.25 inches in length and weighed over a quarter-pound. 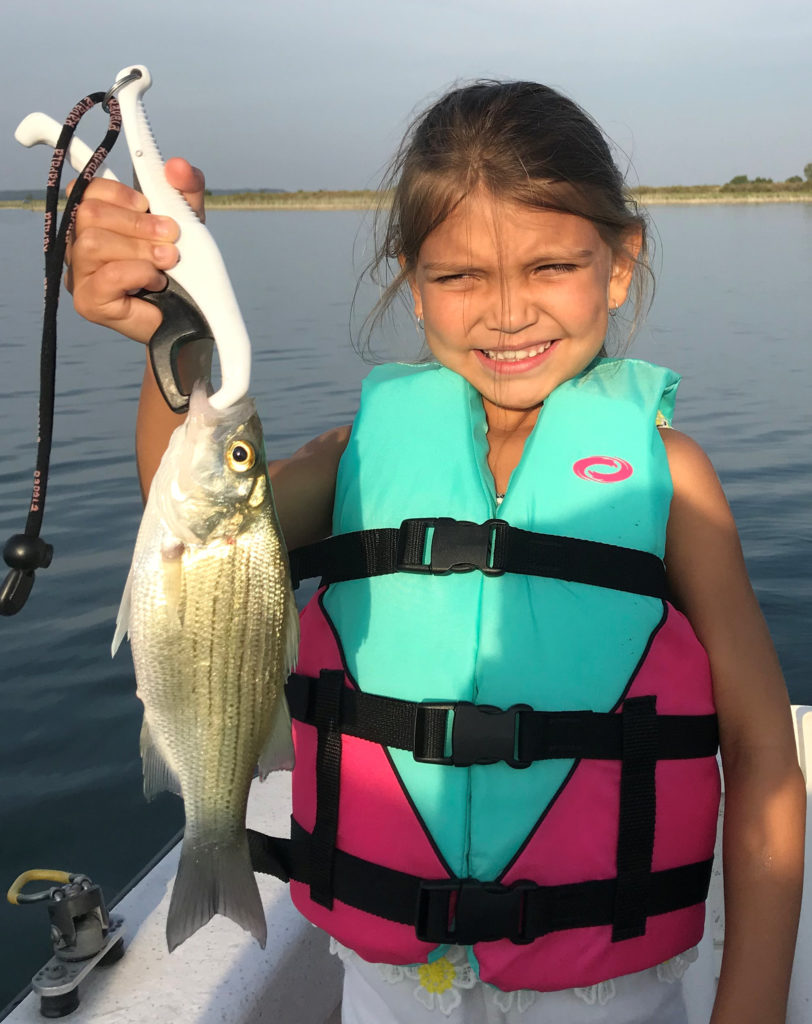 Trinity, age 6, with her first white bass.  It was caught on a downrigger using a Pet Spoon selected to match the size of the forage fish we saw all over the surface of the lake this morning.

WHAT WE FISHED FOR:  This was a multi-species trip focused on white bass and sunfish

HOW WE FISHED: Today we started small and worked our way up in size and technical complexity.  We began the day’s adventure with each kid wielding a bream pole with a fixed length of line, a single hook, a small split shot, and a float which helped suspend pieces of worm over the areas we fished for sunfish.  It looked like a scene out of Huckleberry Finn.  The kids got the hang of watching for the float to submerge and responding quickly with an upward lift of the pole, and from that point on it was non-stop catching.  I moved the boat only one time, and then only a few yards, as the kids amassed a catch of 40 sunfish before the novelty of that portion of our trip wore off.  Among the sunfish were longears, bluegills, and redears.

With a solid start under our belt and the need for “instant gratification” met, we took it up a notch and pursued larger fish in the form of white bass, first by using downriggers.  We started with the youngest (Trinity), and worked our way up to the oldest (Alden), making sure each had a chance at catching one of these freshwater pelagics.

As we were downrigging, I noted an abundance of fish congregated on or near bottom in a number of the locations we downrigged over as we covered water quickly and efficiently.  I felt our chances of being able to stop over top of these fish and work for them vertically was pretty high, thus began the third chapter of our trip.  I used Spot Lock connected to my Humminbird Solix 15 via the i-Pilot Link system to pin us right on top of one of the schools of fish holding at around 38′.  We got light spinning outfits geared up with tailspinners down to the fish and the white bass really put on a show for the kids.  We landed fish after fish until the kids just wore out thanks, in part, to the light winds and increasing heat under cloudless skies.

Now, with only the two boys remaining interested in fishing, we closed out our trip by doing one more run with the downriggers, this time starting with Alden, then alternating back and forth with his brother until, finally, they, too, were ready to call it a good morning with exactly 76 fish landed including 40 sunfish and 36 white bass.

OBSERVATIONS/NOTES: Yesterday’s north wind subsided just after sunset last night, leaving near-calm conditions this morning.   We focused on sunfish until the forecast SE wind began to ripple the surface around 8:00am.  Around this time, gamefish quickly ramped up their feeding, as evidenced by at least light surface activity taking place in any direction one looked.  The feed went strong until about 9:30 and then tapered off quickly

TALLY: 76 fish, all caught and released

Wind Speed & Direction: SE under 3 the entire trip, despite easterly breezes being forecast 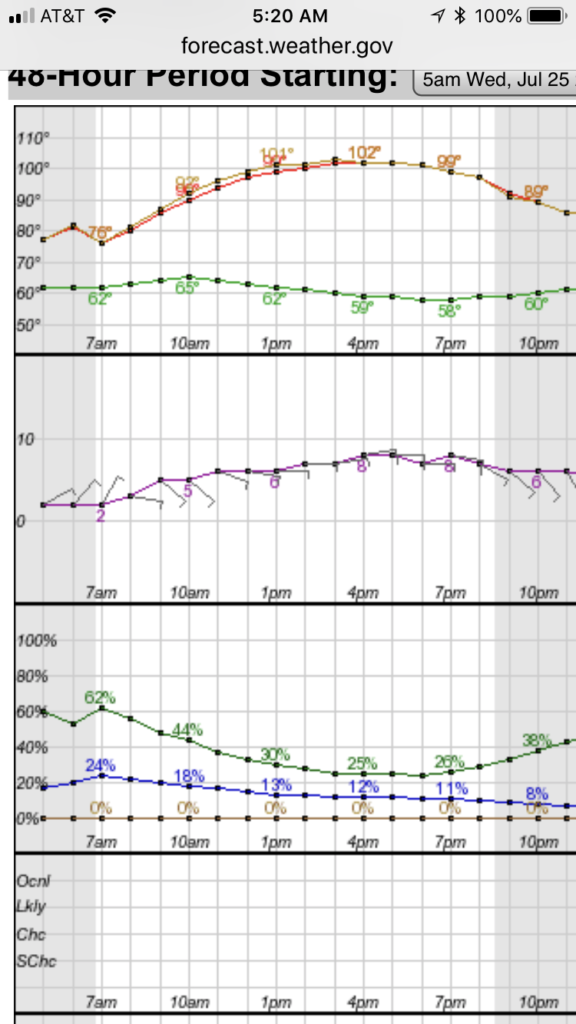