WHO I FISHED WITH:   This morning, Friday, July 27th, I fished with Mr. Steve Bearry and his sons, 16-year-old John, and 15-year-old David.  Mrs. Susan Bearry coordinated the trip, kicked the boys out the door early and, no doubt, enjoyed a little peace and quiet.   In the meantime, “the boys” and I tore ’em up on Stillhouse this morning under very favorable high pressure, stable, “cookie cutter” weather further enhanced by a westerly breeze.

On three separate occasions we landed a “triple”, consisting of 3 fish caught on a single three-armed umbrella rig at the same time.  David landed two of the triples and John got the other, hence, a “Triple-Triple”. 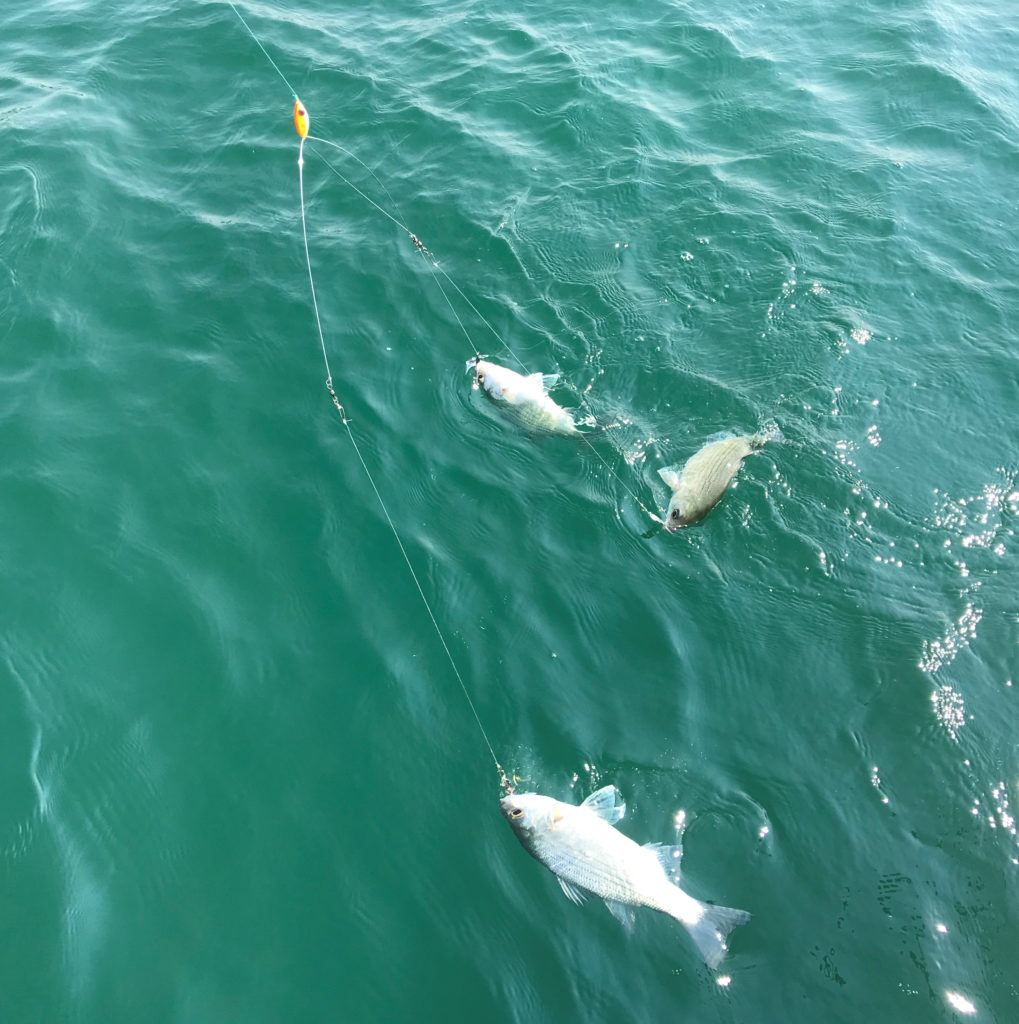 This was a quick snapshot of our third “triple” of the day, courtesy of John Bearry.  A triple occurs when each of the lures on the 3-armed umbrella rig catches a fish, thus allowing 3 fish to be landed on one rod.  During the summer months I typically downrig with a pair of such rigs deployed, thus having 6 baits in the water at any given time. 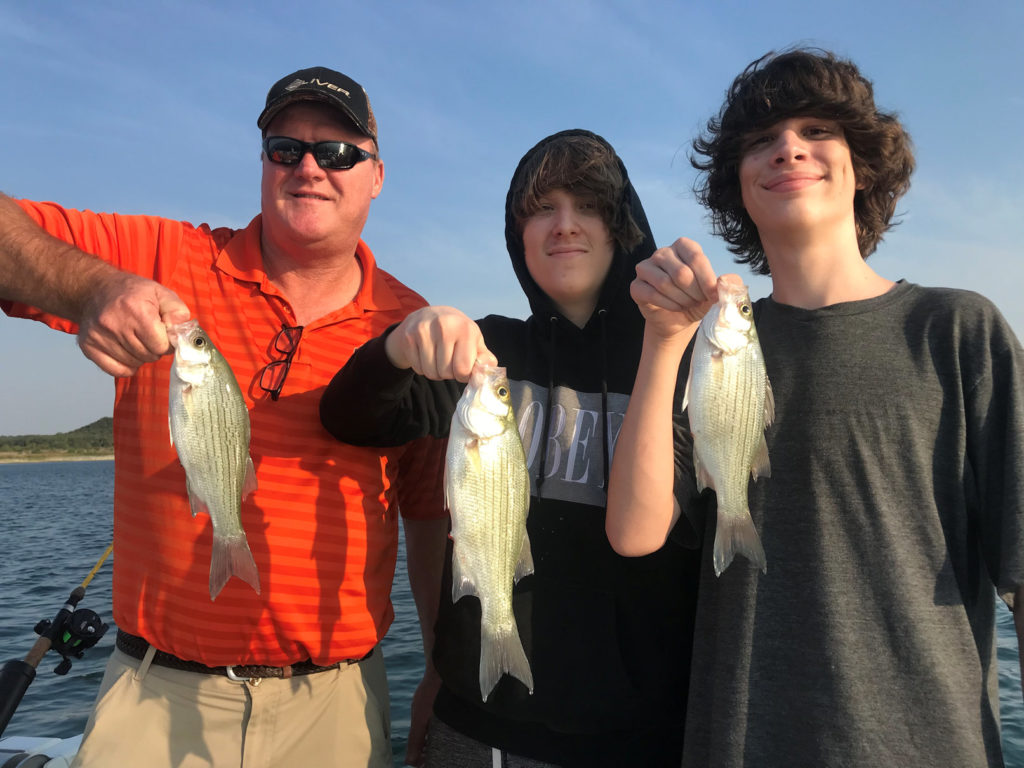 From left: Steve, John, and David Bearry with a few of the 92 fish we landed this morning.  We caught smaller fish (one year class) early on in our first hour, then got a mix of fish, consisting mainly of 2 year class fish, during the remainder of the morning.

WHAT WE FISHED FOR:  This was a multi-species trip focused on white bass

HOW WE FISHED:  As with most summer trips with solid results, we downrigged to find ’em, then capitalized on what we found by using Spot Lock through the i-Pilot Link system after placing a cursor on the Humminbird Solix 15 screen and giving the trolling motor a command to stop on top of schooled, bottom-oriented fish; we then worked vertically for as long as the school would tolerate our presence.

OBSERVATIONS/NOTES: As the temperature eased back to around 99 or 100 degree highs the past two afternoons, the water surface temperature fell, as well, going from 87.3 down to 85.5 this morning.  The westerly breeze definitely coincided with better fishing today, as we observed a full 90 minutes of sporadic topwater action over  large tracts of water.  The bait is growing out well; soon a bump up in Pet Spoon size will be appropriate.

TALLY: 92 fish, all caught and released

Wind Speed & Direction: Due W under 7 the entire trip 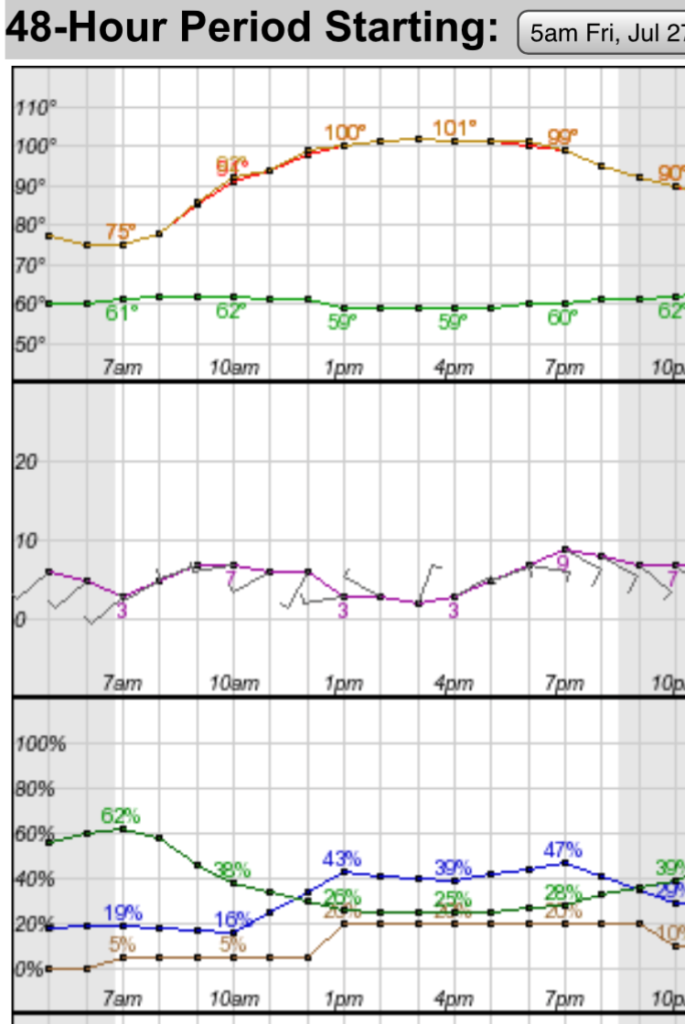