WHO I FISHED WITH: This past Monday evening, Columbus Day 2018, I fished with the wife and sons of U.S. Army Captain Alfredo Carrillo on this season’s 13th SKIFF program trip.

S.K.I.F.F. stands for Soldiers’ Kids Involved in Fishing Fun.  This program began in May of 2009.  It is funded by the donations and fundraising efforts of the Austin Fly Fishers.  S.K.I.F.F. provides the children of military personnel separated from their families due to duty commitments with the opportunity to go fishing.  I coordinate and conduct these 3.5 to 4 hour adventures on Belton Lake and Stillhouse Hollow Reservoir, just outside the gates of Fort Hood in Bell County, TX.

As of this report, SKIFF has placed 427 kids on the water.  Those children have landed 10,565 fish, an average of over 24 fish per child. 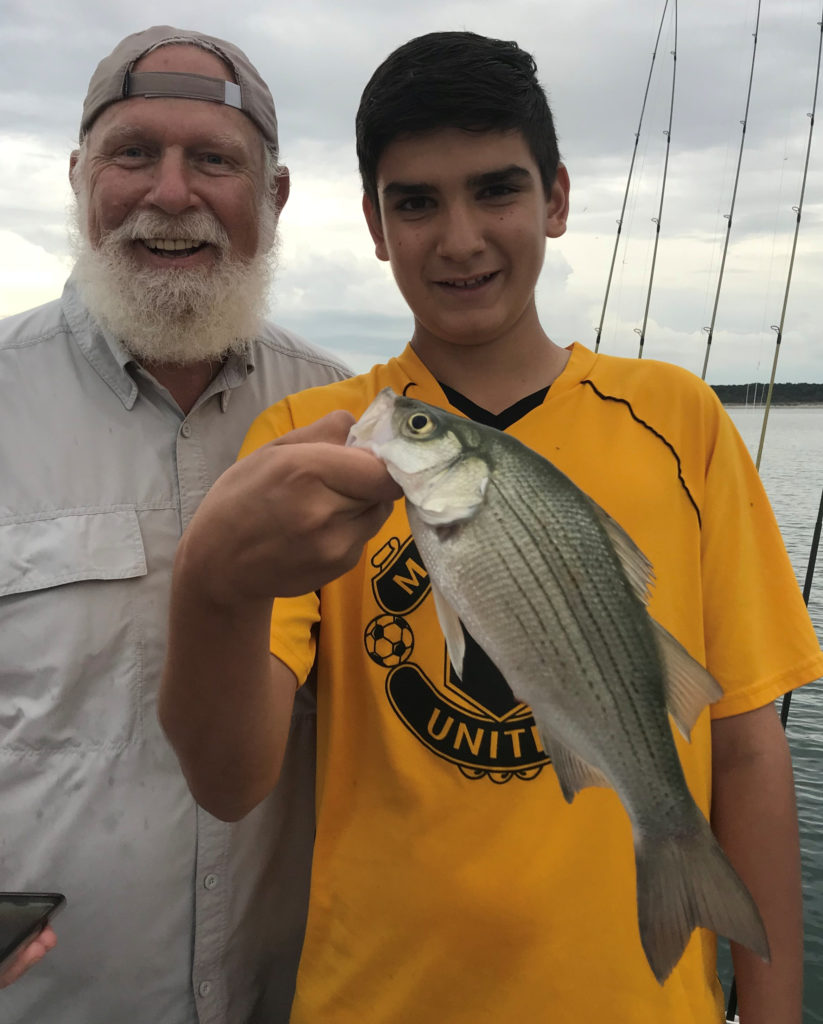 Above:  Dave Hill (left) of the Austin Fly Fishers stands with Matthew Carrillo as he grips our largest fish of the trip — a white bass that went right at 14″ long which fell for a downrigged Pet Spoon in about 36 feet of water between rain storms. 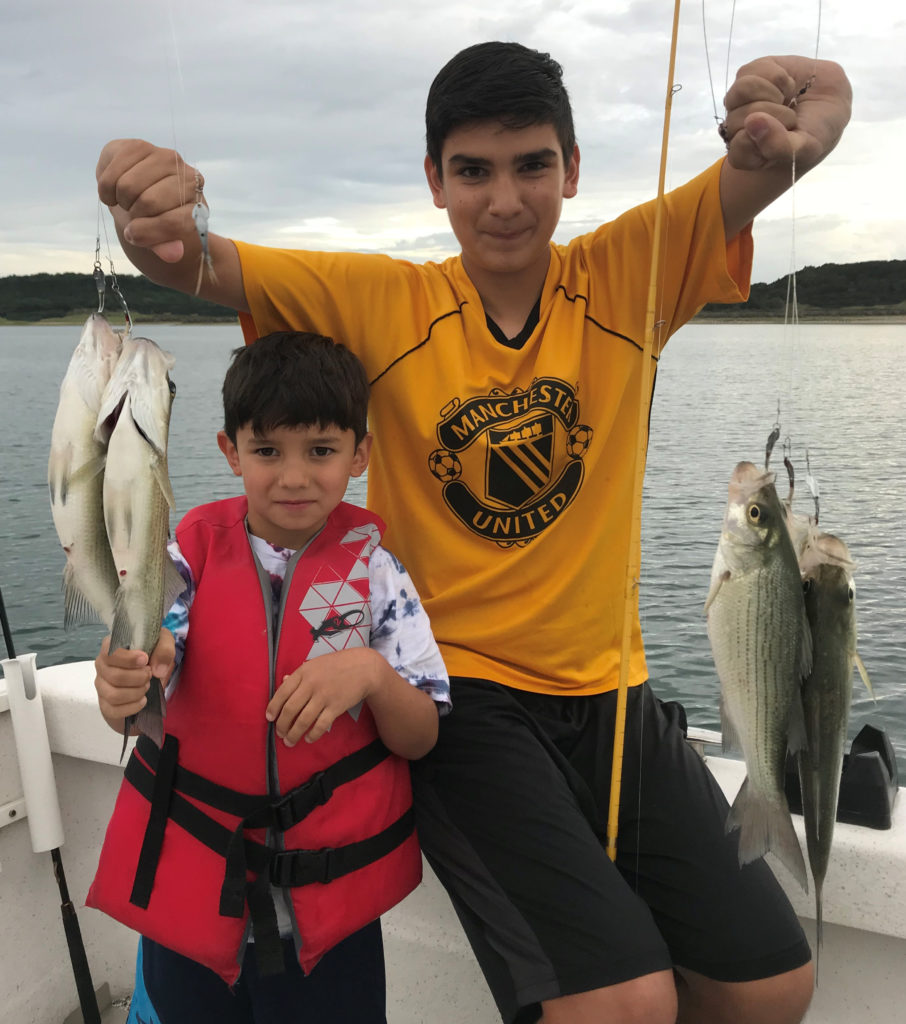 Above: 4-year-old Sammy Carrillo gets a little help from his big brother, 14-year-old Matthew Carrillo, as the boys landed a simultaneous double and triple of white bass.  The boys wound up landed 55 fish during their Columbus Day afternoon outing. 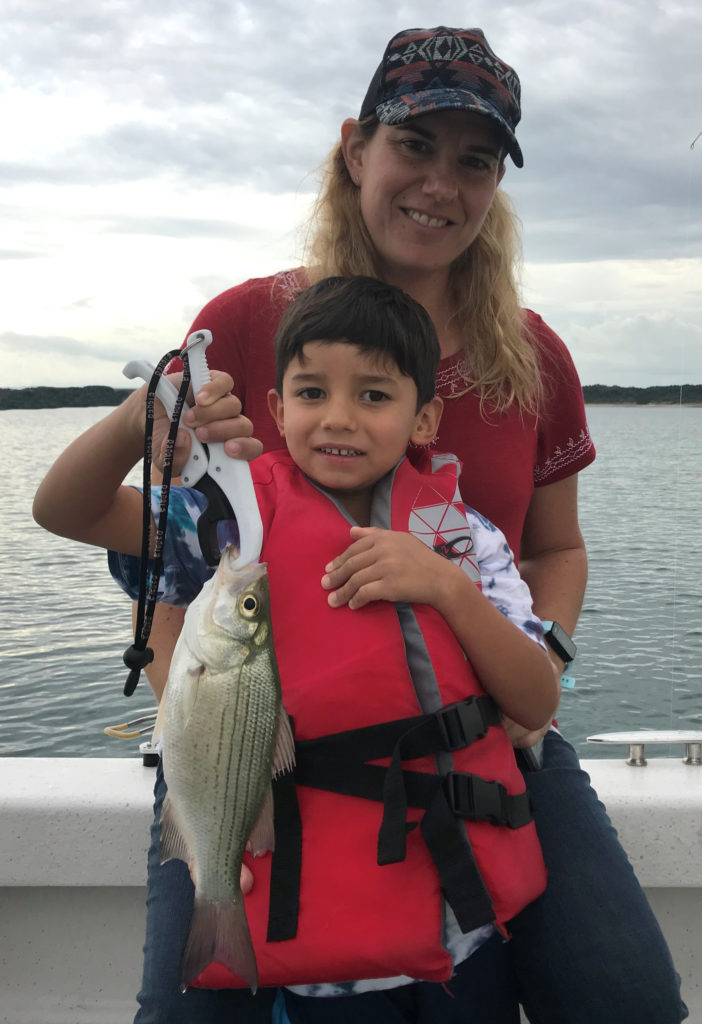 Above: 4-year-old Sammy Carrillo and his mom, Amy Carrillo with Sammy’s first “big fish” landed after he scored over a dozen smaller sunfish earlier in the trip from a quiet cove.

WHAT WE FISHED FOR:  This was a multi-species trip focused on sunfish and white bass.

HOW WE FISHED:  The Killeen Independent School District, to which a majority of Fort Hood’s children go for their education, had Columbus Day off on Monday, October 8th.

Mrs. Amy Carrillo contacted me about a month in advance, interested in her two boys, Matthew and Sammy, going on a S.K.I.F.F. fishing trip on that day.

The boys’ father, U.S. Army Captain Alfredo Carrillo, is currently deployed to Iraq for his second tour there.  He is a commissioned officer in the Army’s engineer branch.

Mrs. Carrillo joined us for this trip, as did AFF member Dave Hill who, after the trip, presented the boys each with their own closed-face spinning outfit and a S.K.I.F.F. logo ball cap.

We fished the first hour of the trip in the rain with an ambient air temperature at 82F.  Sammy, age 4, needed some coaching, so I worked with him one-on-one showing him how to tempt and land sunfish using a bream pole (much like a Tenkara outfit).  At age 14, Matthew simply observed what I was showing Sammy, and was very successful working independently on the opposite side of the boat.

We fished for about 90 minutes in a quiet cove, landing 36 fish including redear, longear, green, and bluegill sunfish.

We devoted the last half of the trip to chasing “big game” (as compared to the diminutive sunfish) in the form of white bass.  Although our window to successfully chase these fish with downriggers in the deep, clear waters of Stillhouse Hollow was limited by incoming weather, we landed 19 of them as one storm passed and before another arrived.

This included 2 sets of triples (3 fish landed on one rod at the same time using an umbrella rig) for Matthew, and 2 sets of doubles for Sammy.  We ended the trip with 55 fish landed.

OBSERVATIONS/NOTES:  Based on my own observations on Stillhouse’s lack of topwater/bait/bird action, and the input I gathered from many tournament anglers involved with the Lake Belton Fishing for Freedom event yesterday while interviewing them for my weekly news article, there was definitely a depressed bite through 11am yesterday under dark, damp, murky skies with light winds.  We came off the water by 11a, but those tournament anglers I spoke with reported an enhanced bite with enhanced light levels and wind from 11a on.

TALLY: 55 fish, all caught and released

Wind Speed & Direction: SSE4 at trip’s start, then going calm after about 90 minutes’ worth of gentle rainfall.

Sky Conditions: Damp, grey, overcast skies all morning with a light drizzle falling on occasion, clearing to 60% clouds with some breaks of blue sky in the hour from 10-11a 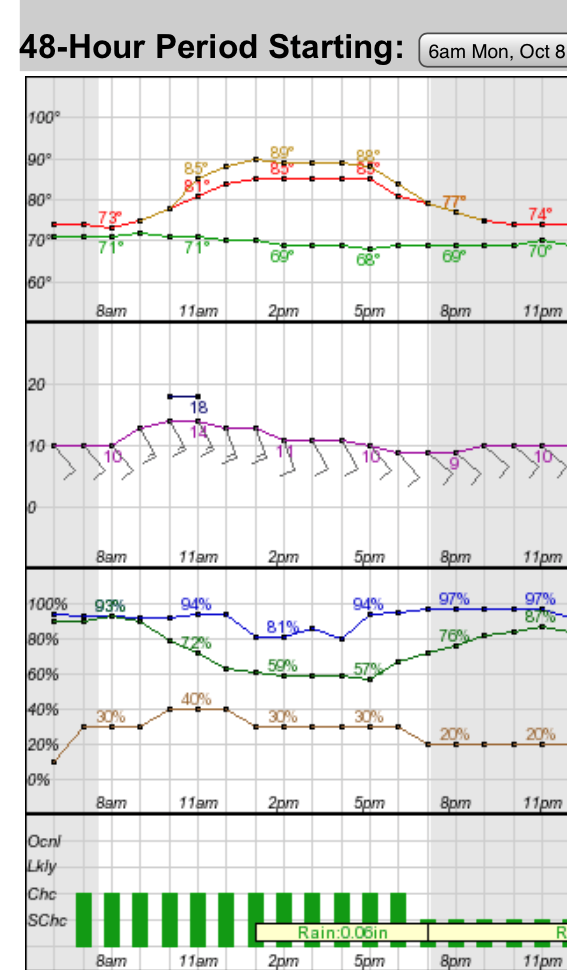