WHO I FISHED WITH: This morning, Saturday, October 13th, S.K.I.F.F. put three more youngsters on the water, this time on Lake Belton in pursuit of white bass.  Evan (age 10), Colin (age 8), and Carson (age 6) came aboard just after a pre-dawn round of thunderstorms cleared the Lake Belton area moving from south to north.

The boys’ father, U.S. Army Master Sergeant Bryan Reed, has served in the military police branch for over 22 years.  He has been deployed seven times during his career with his most recent tour taking him to South Korea, where he has been sent two previous times.  MSG Reed’s other deployments included tours to Iraq, Afghanistan, Uzbekistan, Egypt, and Kuwait.

S.K.I.F.F. stands for Soldiers’ Kids Involved in Fishing Fun.  This program began in May of 2009.  It is funded by the donations and fundraising efforts of the Austin Fly Fishers.  S.K.I.F.F. provides the children of military personnel separated from their families due to duty commitments with the opportunity to go fishing.  I coordinate and conduct these 3.5 to 4 hour adventures on Belton Lake and Stillhouse Hollow Reservoir, just outside the gates of Fort Hood in Bell County, TX. 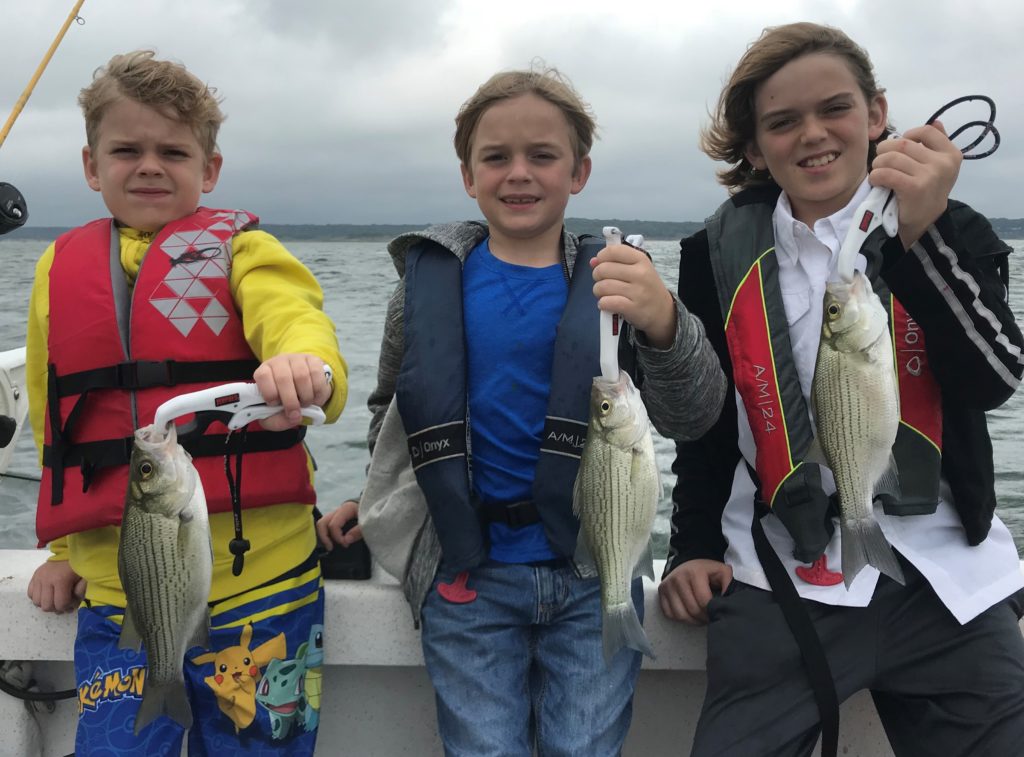 WHAT WE FISHED FOR:  This was a multi-species trip focused on white bass.

The morning’s weather was very unsettled with dark, grey skies, occasional drizzle, and gusty winds.  The fish were a bit more challenging to come by than earlier in the week, but thanks to the help of a hungry osprey we spotted diving for food, we got a break and quickly put 22 fish in the boat, including one hybrid striped bass and 21 white bass.  We initially caught these fish using downriggers, but then switched over to a vertical jigging approach once we saw fish were congregated on and near bottom in this area.

After the action at this area dissipated, we continued our search, finding one more group of fish in about 27 feet of water on a sloped bottom facing toward the stiff SE wind.  We added another 12 fish to our tally here, taking our trip sum to a final total of 34 fish landed.  I continued to recon for additional fish-holding locations given the change of seasons now underway.  I found 2 additional locations, caught 4 fish at each to confirm size and species and then departed.

By 11:00am, Colin and Carson had played out, although I think Evan could have stuck with me for another 4 hours, so, I got them back on dry land and proceeded to continue to scout for more fish until weather threatened around noon.

TALLY: 42 fish, all caught and released

Sky Conditions: 100% grey clouds with occasional light drizzle during the trip.  A storm cell passed over the area prior to sunrise.

**Area 212 – downrigging and smoking; tipped off by working osprey