WHO I FISHED WITH: This past Saturday morning I fished with returning guest Brian Pennington of Harker Heights, and his adult sons Eric and Alex.  Brian has been working at the Operational Test Command (OTC) at West Fort Hood for many years testing military equipment before turning it over to our troops to use.  Following his graduation from Texas A&M in College Station, Eric went to work for the A&M library at that campus, and Alex is in pursuit of his bachelor degree at Southwest Texas State University in San Marcos. 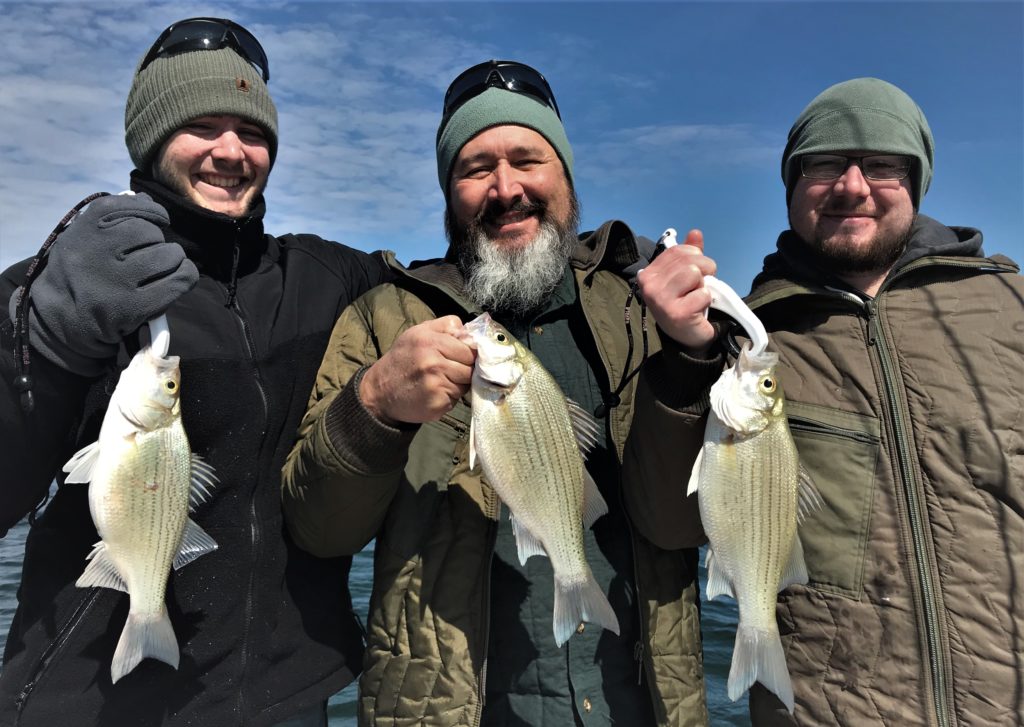 HOW WE FISHED: As I wrapped up my evening trip at Lake Belton the night before this trip, the NOAA weather forecast painted a pretty grim picture of bright, cold, calm conditions.  Seeing this, I phoned the Pennington’s, explained what I saw and how such conditions typically negatively impact the fishing, and gave them the option of cancelling, rescheduling, or going forward with the trip as planned.  With his boys now being out on their own, coordinating time together is difficult, so, Brian chose to press on with our plans.

We were fortunate in that the weather that was forecast did not actually come to fruition until about 75 minutes before our planned wrap-up time of 11:30.  During that final portion of the trip, the fishing tapered to zero and just finding fish to fish for was challenging.

During the first part of the trip, however, we were blessed to have some unexpected grey cloud cover.  This allowed for a light morning feed.  We found fish with the help of birds for about the first 2 hours, then relied on sonar for our fish-finding after the bird action died off.

The white bass I’m finding in shallower water very much seem to be in small packs of 3-8 fish each, not in larger schools which allow you to sit in one place and catch with steady regularity.  Thus, we used the “jog” function on the Minn Kota Ulterra quite extensively today, catching a few, then moving a few boat-lengths to access “new” water, catching a few more, and so on.

We used Cicada blade baits for the majority of our catching today, although the fish are still sluggish and we got a lot of short strikes and missed fish thanks to a lack of aggressive pursuit of these lures.  Never did we have a hooked fish come to the boat accompanied by schoolmates, which is common when fish are more aggressive in warmer water.

OBSERVATIONS:  Most bird action was focused on dead/wounded bluegill, not yet on shad.

Wind Speed & Direction:  Winds were NE3 at trip’s start, picking up to NE6-8 by trip’s end

Sky Conditions: Light grey skies due to overrunning moisture coming from the SSW right at sunrise gave us about 2.5 hours of cloud cover, which then cleared about the time the birds quit and the fishing got progressively tougher. 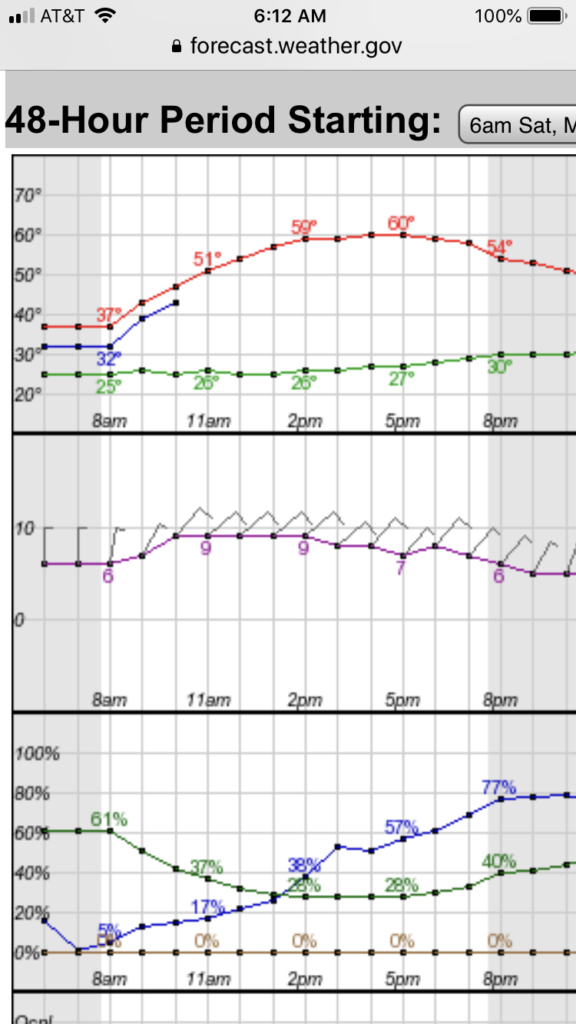 WHO I FISHED WITH: This past Friday afternoon I welcomed aboard Josh and Steve Welch and their mom, Carol Welch.  Josh makes his living in the land development/building field here in Central Texas, Steve is pursuing credentials in the field of computer science from TSTC in Waco, and Carol, among other things, works on keeping her boys in line.

No sooner had the trip started than a 4-hour long debate over where to go eat dinner ensued. There was no style of food, price point, or locale which didn’t get consideration.  In the end, proximity beat out all other variables, and my wind-chilled, hungry fishing friends headed to the Dead Fish Grill directly. 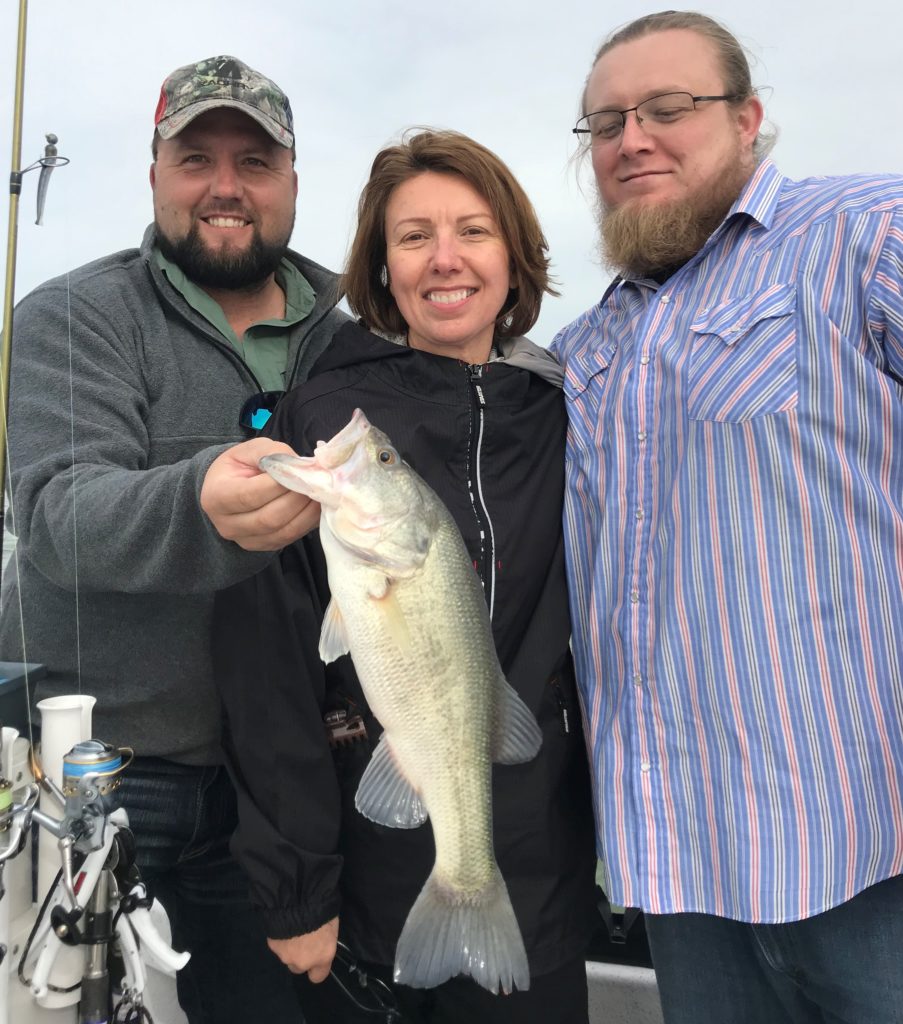 PHOTO CAPTION: From left:   Josh, Carol, and Steve Welch with a nice Lake Belton largemouth bass which was holding in some isolated cover we got near as we vertically jigged for white bass.

WHEN WE FISHED:  Friday evening, 15 March

HOW WE FISHED: Thanks to continued cool weather and persistent northerly winds, the fishing is still not where it could be by this point in the season.  We were fortunate to have manageable wind velocity from the NE, and, best of all, some grey cloud cover for the majority of the trip.

We used vertical tactics the entire trip, scoring on both snap-jigging when the fish were bottom-oriented, and on slow smoking when the fish were suspended (and typically accompanied by bird action above).  Whenever we encountered suspended fish we put the Garmin LiveScope into action and were therefore able to be precise in our presentations to individual fish.

As  has become the norm, a significant portion of our catch consisted of freshwater drum, but the majority of our catch of 55 fish was still made up of white bass.   We also managed 2 largemouth bass.  All fish were taken on my Hazy Eye Slab/Stinger combination.

OBSERVATIONS:   Starting to see threadfin shad in great numbers in the upper 15′ of the water column.

Sky Conditions: Grey skies due to overrunning moisture coming from the SSW in the face of a NNE wind 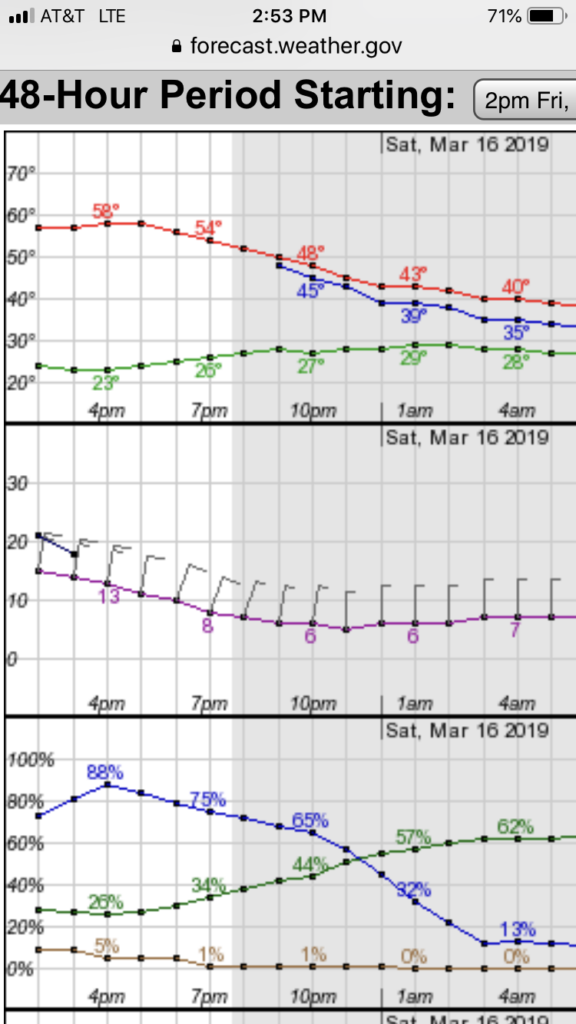