WHO I FISHED WITH:   This morning, Monday, 05 August, I fished with Danny Richardson of Salado, his two adult sons, Casey and Kevin, and Casey’s son, 9-year-old Max.  This was one of several events taking place during a Richardson family reunion centered in Salado.

Casey is a U.S. Air Force test pilot currently serving with the Canadian Air Force in Alberta, Kevin is a special education teacher in a public school in Buda, TX, Max lives with his mom in Idaho, and, although Danny’s home is in Salado, he is a contractor to the U.S. Government working in Afghanistan to maintain aircraft and tends to be overseas more than stateside. 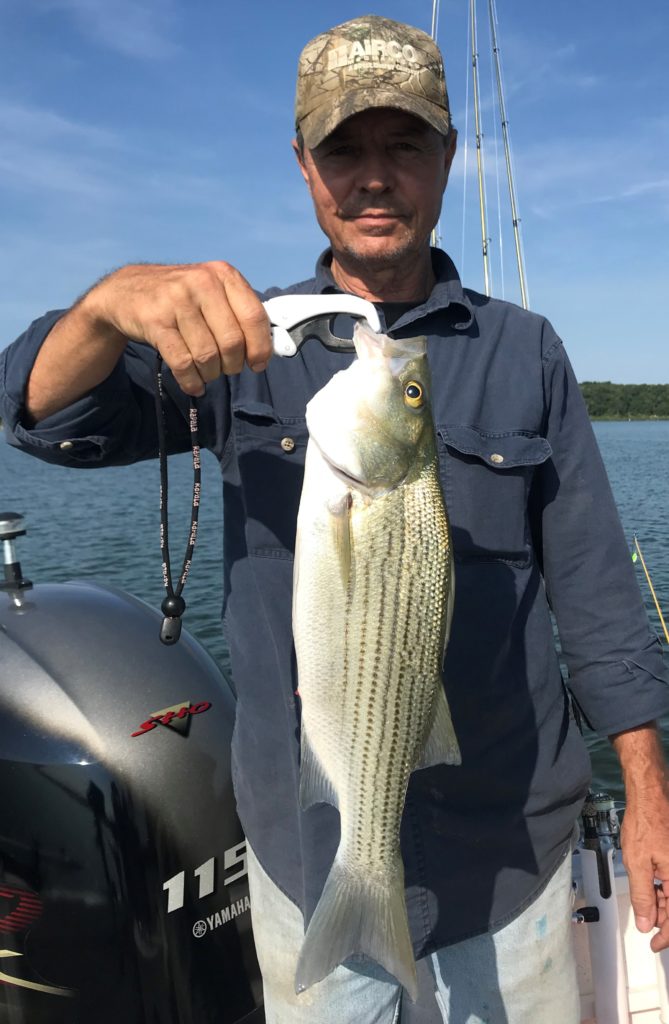 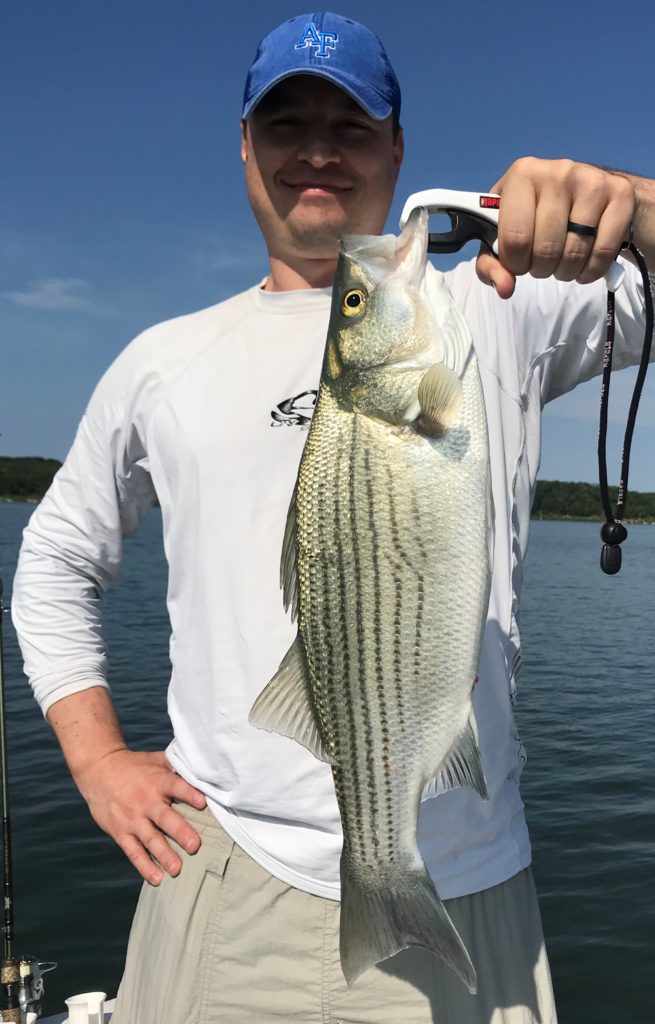 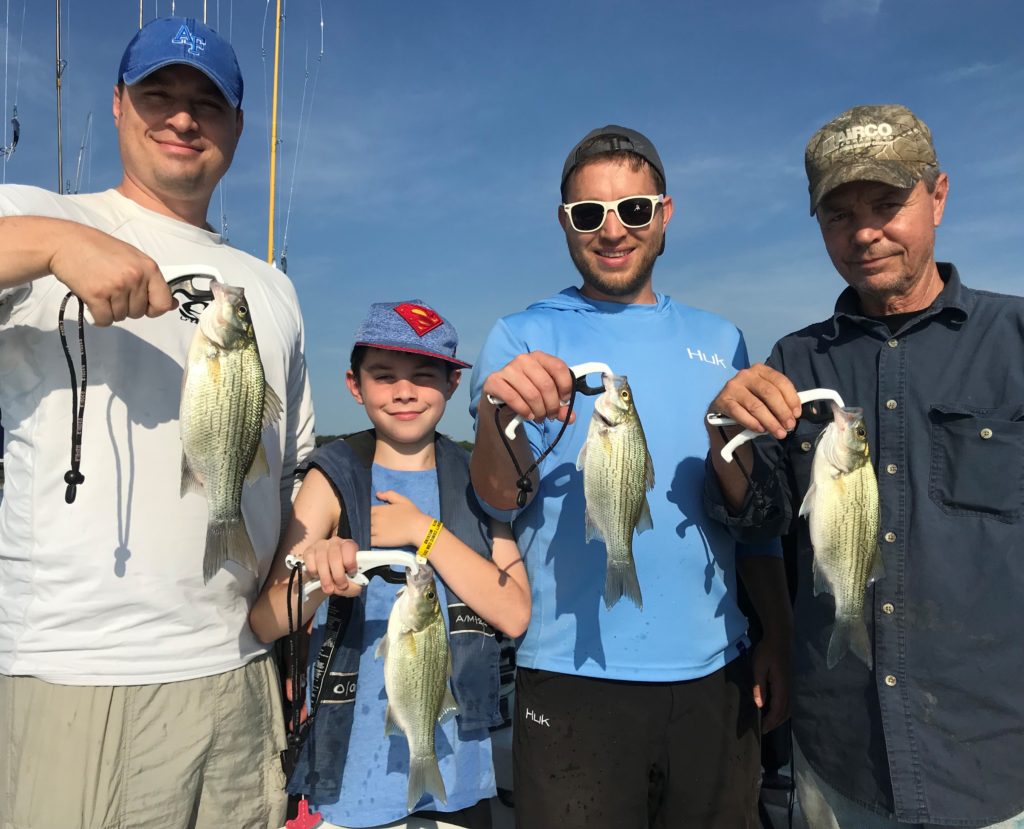 PHOTO CAPTION:  From left: Casey, Max, Kevin, and Danny Richardson, each with one of the 36 white bass we landed during this morning’s topwater feeding spree.

WHAT WE FISHED FOR:  Multi-species targeting white bass, blue catfish, and sunfish

HOW WE FISHED: We truly went “multi-species” today in order to keep the fish coming over the side of the boat.  Not only is it summertime, but, today we had bright skies and light winds, which always makes things tough.

We began our day downrigging under low-light conditions while keeping a vigilant watch on the surface for topwater action.  We landed several fish on the downriggers using the upsized Pet Spoons I switched to this past weekend.  After this weekend’s wrinkle in the weather passed around noon yesterday, clearing the skies, the fish got back onto their early morning feeding schedule.  Hence, we enjoyed about 45 minutes’ worth of solid topwater action from 2 and 3 year old white bass.

After the topwater action died, the post-topwater downrigging did not last long this morning as the fish sounded, dispersed, and turned off quickly thereafter.

Having seen this routinely, and having a mixed party of adults with one child, I came prepared to target blue catfish after routinely seeing them in several areas while downrigging last week.  We fished using a tactic shared with me by Steve Webb earlier this spring involving cutbait, and wound up putting 8 blue cat in the boat.  I was using chum to draw fish in, but the lack of wind, I felt, did not help the scent disperse well, thus, we caught what was around us, but didn’t draw in a lot of other fish.

After this, we did a bit more downrigging for suspended, moving schools of white bass and found a few schools of suspended, moving hybrid stripers while doing so.  These schools numbered 20-40 individuals, but typically only gave up one or two fish per downrigger pass.

We saved a bit of time at the end for a grand finale for Max, heading up shallow to treat him to some one-on-one time with the local sunfish population.

Max landed 17 sunfish in about 25 minutes’ time and enjoyed doing so, after indicating earlier in the trip that he wasn’t all that interested in the whole proposition.

OBSERVATIONS:  Saw no opportunities for vertical presentations today given how fast the fish were moving after bait.

Wind Speed & Direction: Under 5mph from the S the entire trip 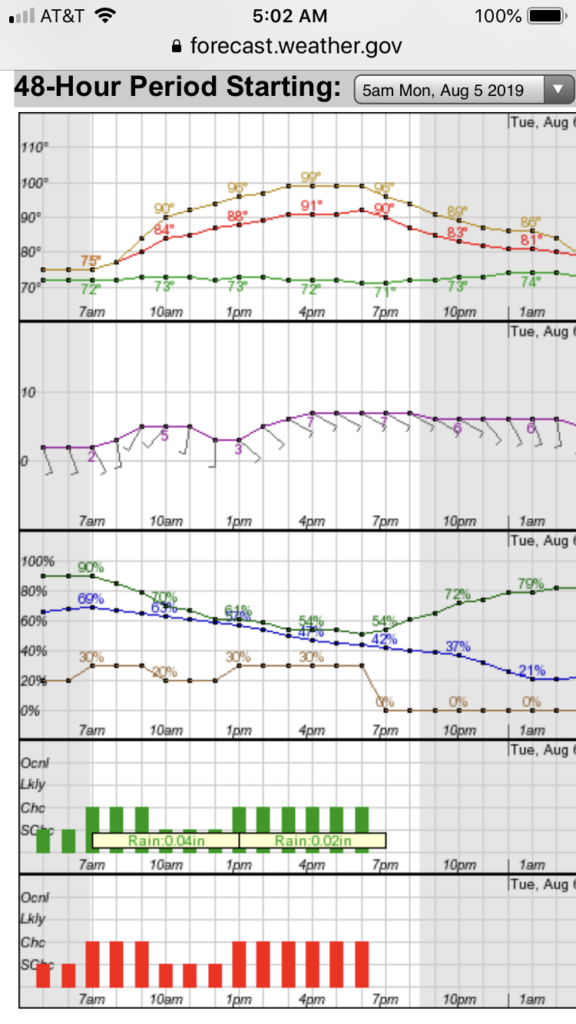