WHO I FISHED WITH:     On Wednesday morning, August 14th, I fished with first-time clients Dr. Mike Reis and his wife, Barbara, of Belton, TX.  Mike is a family medicine doctor, and Barbara just retired from being a mom, only to take on a full-time job of being a grandma, with at least 3 new “clients” on the way from their two sons, one daughter, and their respective spouses! 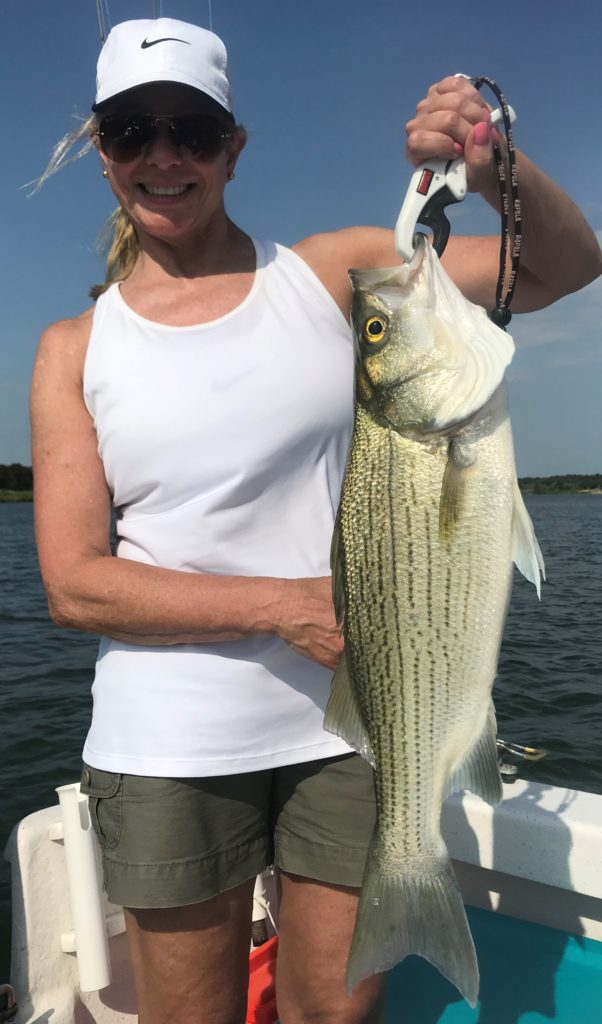 PHOTO CAPTION:  Barbara Reis took this nice Lake Belton hybrid striped bass on a tailspinner fished vertically in an area loaded with bait and with white bass present, as well. 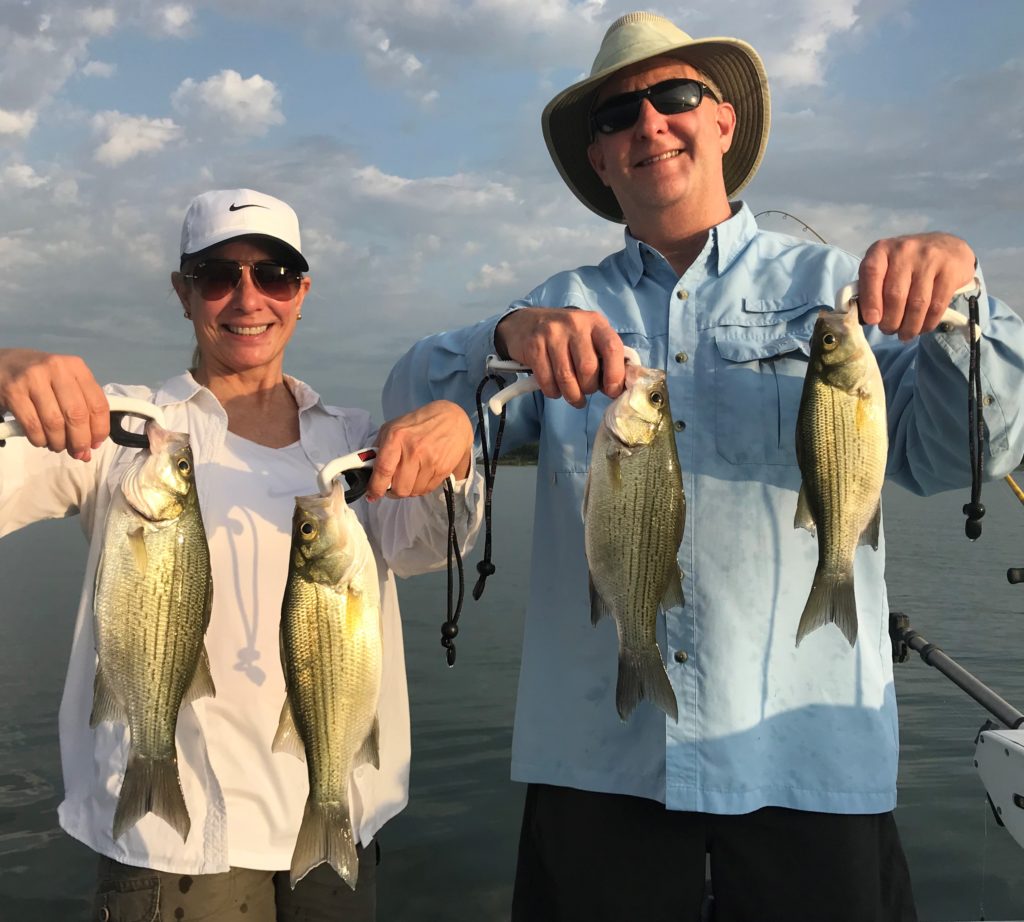 PHOTO CAPTION:  Once again this morning the topwater blitz remained reliable, albeit short-lived.  About 35 minutes is all these fish will stay at the surface given the cloudless conditions we’ve had most morning for the past 3 weeks.

WHAT WE FISHED FOR: White bass the entire trip, with an “intro” to both jugfishing and sunfishing (both to be shared with grandkids) mixed in

HOW WE FISHED:    This morning began like most morning under these last 3 weeks of stable weather, but the mid- to late-morning fishing was definitely enhanced by the wrinkle in the weather today triggered by an incoming, mild cold front.  The topwater blitz that has routinely taken place occurred again this morning, but afterwards we enjoyed some pre-frontal fish feeding activity, most of which was subsurface but aggressive.

We were able to locate active white bass the entire morning which responded best to downrigging, but also took horizontally retrieved bladebaits and vertically worked tailspinners.  These fish were very actively moving, hence, Spot-Locking over top of them did not really work very well as they just would not stay put.  The ability to see fish on side imaging, mark them, then downrig over them quickly on a subsequent pass put a lot of fish in the boat this morning in the form of both singles and doubles.

While we downrigged, we also kept an eye on 20 juglines we quickly set out, all baited with shad.  We got 8 pulldowns on 20 jugs in 2.25 hours, which resulted in 2 landed blue catfish (a lot of gar in the area told me we’d have a lot of “false alarms”, as well).

To close out the trip, and because Mike requested that I show him some options for fishing from his own boat which is not trolling-motor equipped (and because he and Barbara will be doing a lot of fishing with a lot of grandkids before long), I did a “demo” on shallow water sunfishing, providing them with some tips on rigging and bait selection which will help them help others be successful.

OBSERVATIONS: 1) We had a wrinkle in the weather today as a mild cold front hit at precisely 9:10am.  This allowed for an average topwater feed at low light, but, thanks to prefrontal activity and some cloud cover, there was a solid white bass bite beyond the topwater blitz this morning.  2) The slight change in the behavior of the topwater feeding fish I noted Monday and Tuesday mornings repeated itself again this morning.  Instead of moving parallel to the shore during their feed, the fish moved perpendicular to the shoreline from shallow to deep, finally leaving the surface while over ~40 feet of water.

Wind Speed & Direction:  Prefrontal winds were light and variable generally from the south, then winds went NNW6-7 at 9:10 as the mild cold front hit

Sky Conditions:  High white haze over a blue sky just thick enough to cut some of the sun’s heat through 8:20, then increasing grey cloud cover up to 50% built in.

Wx SNAPSHOT:     NOAA nailed it today.  The forecast windshift of the incoming cold front was literally within minutes of the forecast shown on the day’s weather graph… 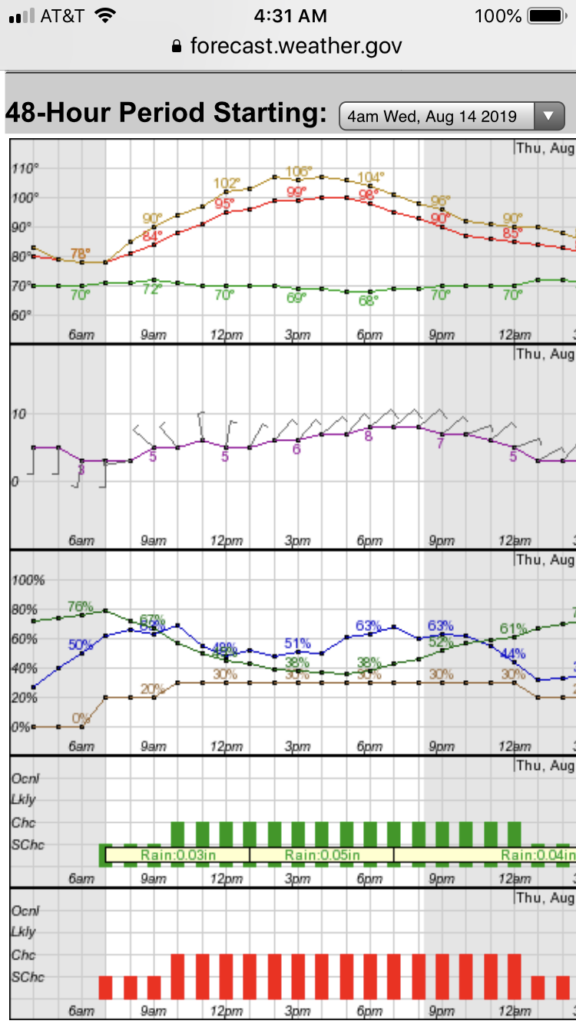