WHO I FISHED WITH:  This morning, Tuesday, September 24th, I fished with returning client Dwight Stone who fished with me for the first time just last week.  Dwight really enjoyed the multi-species approach we took, as well as the introduction to downrigging and to the use of sonar I tried to provide.  This time, he brought a friend with him — a friend of over 20 years, Mr. Oscar Leal, also from Georgetown, TX.  According to Dwight, (who both Oscar and I now realize to be slightly prone to exaggeration), Oscar has retired about 7 different times and is currently enjoying life while still working at AMD in south Austin.

Once again, the weather cooperated and allowed for an enjoyable, productive morning, yielding 110 fish for us.

VIDEO CAPTION: This Garmin LiveScope video clip shows how aggressive the white bass became when good southerly winds combined with about 25 minutes of thick cloud cover to turn the skies grey temporarily.  If you hover your cursor over the image so the runtime shows and watch just left of center at the 25′ bottom and between the vertical grid marks labelled 2 and 0,  you’ll see a tailspinner fall at the :13 second mark, fish swarm all over it as it rises upwards and one gets hooked. Then, the school of fish perks up and chases the hooked fish halfway to the surface.  This crazy spree helped us put 70 fish in the boat in short order. 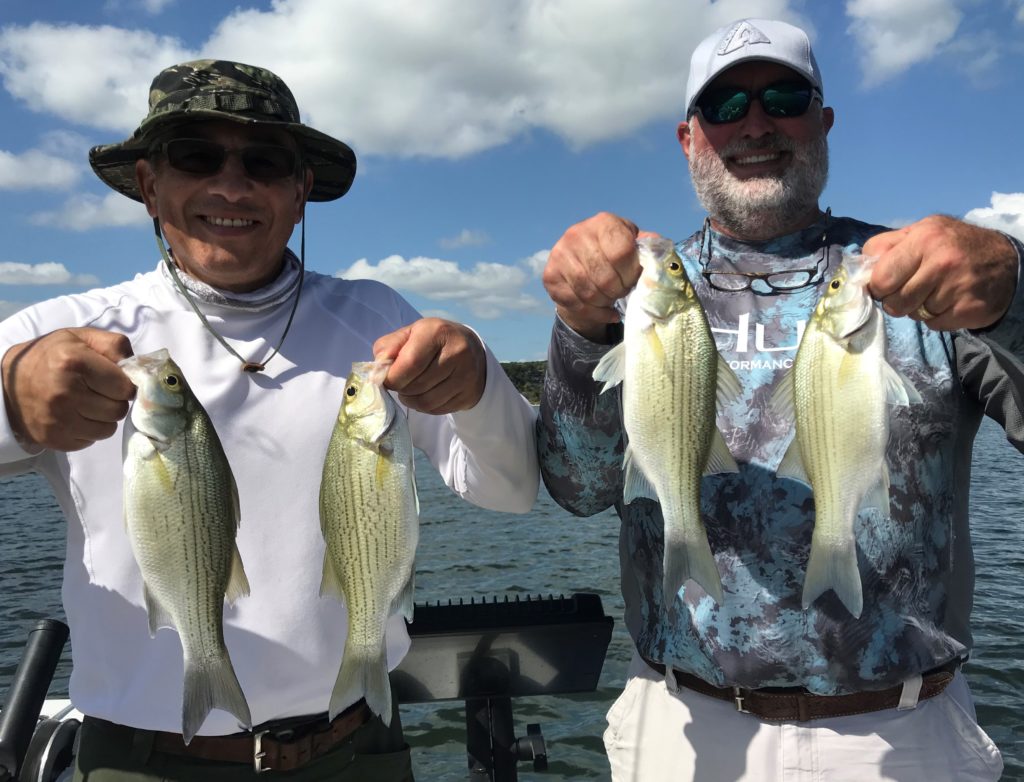 PHOTO CAPTION:  Long-time fishing buddies Oscar Leal, left, and Dwight Stone enjoyed a multi-species kind of morning on Belton Lake today — white bass, largemouth and bluecat all cooperated for us.  Strangely enough, despite the good fishing, we did not land a single hybrid, nor see any low-light topwater action by white bass today.

HOW WE FISHED:   We started off the morning anticipating a low-light, topwater bite but experienced none; however, the fish were present and did bite well on our downriggered presentations — they just didn’t rise the extra few feet to the surface to pin bait there.

After the sun actually cleared the horizon and rose, we chased some spotty largemouth action in two separate areas, landing a half-dozen just-legal fish.

We moved on to do some more downrigging and, shortly after beginning, encountered large, bottom-oriented schools of white bass.  Based on the past few trips’ worth of experience, I felt these could be hovered over and jigged for, so we got the Garmin LiveScope cranked up, sent the tailspinners down, and up came the white bass — 70 of them to be exact.  We finally left them biting in order to go chase some blue catfish before Oscar and Dwight had to hit the road.

We left about an hour or so for blue cat fishing.  We made a stop which yielded smaller fish than I’d been catching recently, so, we rolled the dice, moved again, and that gamble paid off.  We found the nice 14-16 inch fish which battle well on the white bass-sized spinning tackle we were using.  In all, we landed 20 blue cat which came into our chum and fell for our punchbait.

OBSERVATIONS: Despite the good fishing this morning, we did not land a single hybrid mixed in with the many cooperative white bass we caught, nor did we see any low-light topwater action by white bass today.  There was nothing about the conditions (murky cloud color/thickness, high winds, frontal activity, etc.) which were the apparent cause of this.  In fact, there were plenty of fish present where I’d expected to see topwater action, and the fish bit well, they just did not rise to the surface to feed.

Sky Conditions: No sun-obscuring cloud cover in the east as the sun rose; but clouds began to build in at mid-morning, quickly increasing to 60-70% coverage, thus allowing for times when the sun was obscured for several minutes at a time. 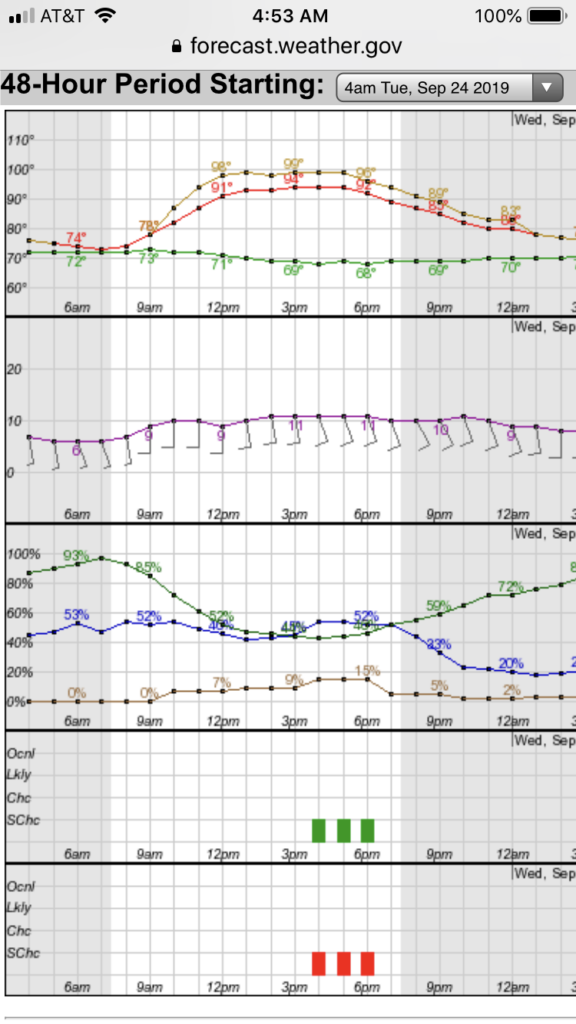