WHO I FISHED WITH:  This morning, Saturday, 28 September, I fished with Miss Lilee Oliver and her friend, Lilli Moss, both accompanied by Lilee’s mom, Yvette Oliver.  This trip was in celebration of Lilee’s 6th birthday, and was the third consecutive year the three ladies have come aboard for a fishing trip in celebration of that event.

Yvette is a public school teacher in the Killeen ISD with a heart for both the Lord and for kids, in particular special needs kids who need extra help getting through school. 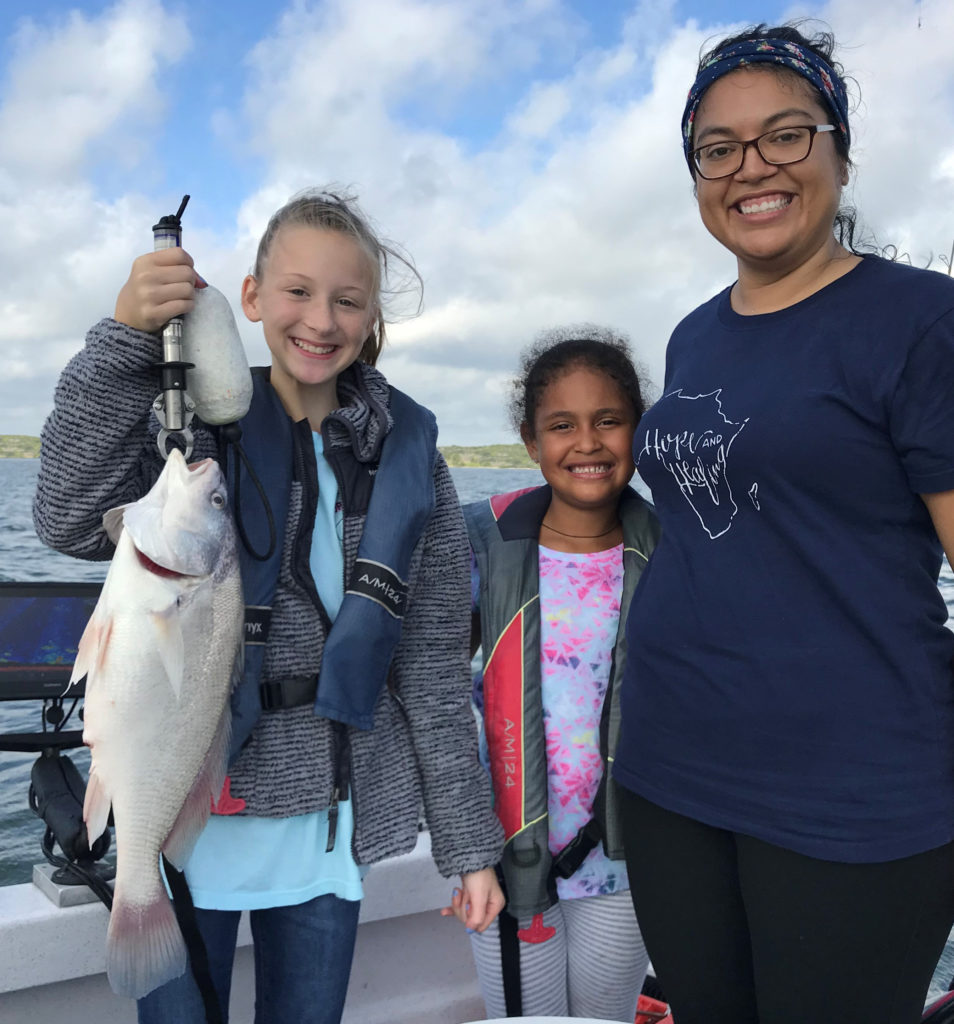 PHOTO CAPTION:  Neat story here … we were all working tailspinners for white bass very successfully when my rod got thumped — hard!!  I set the hook and knew there was a large fish on the line — I figured a buffalo, blue cat, or drum.  The two girls were fishing to my left and right as we all faced over the starboard gunwale.  I said, “I’ve got a big one on.  Who would like to reel it in?”  Immediately, both girls said “Me!”.  Upon hearing her younger friend express a desire to reel in the large fish, Lilli said, “It’s okay, you go ahead,” and she let the birthday girl, Lilee have the honors.  You don’t see selflessness and consideration for others in an abundance of kids these day, so, to me, that was very encouraging!  That’s Lilli, who didn’t reel the fish in, holding the fish for the photo. 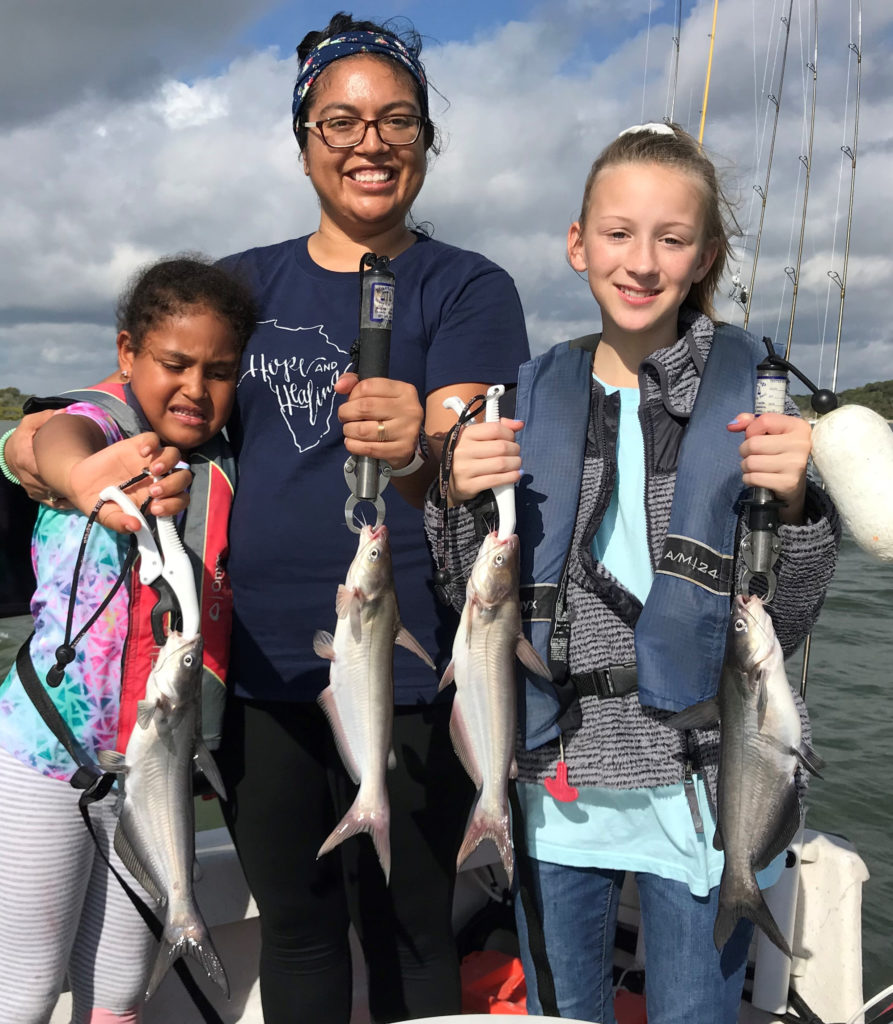 PHOTO CAPTION:  Once the girls got the hang of watching and responding correctly to their slipfloat being suddenly pulled beneath the surface, they started “whacking and stacking” the blue cats! 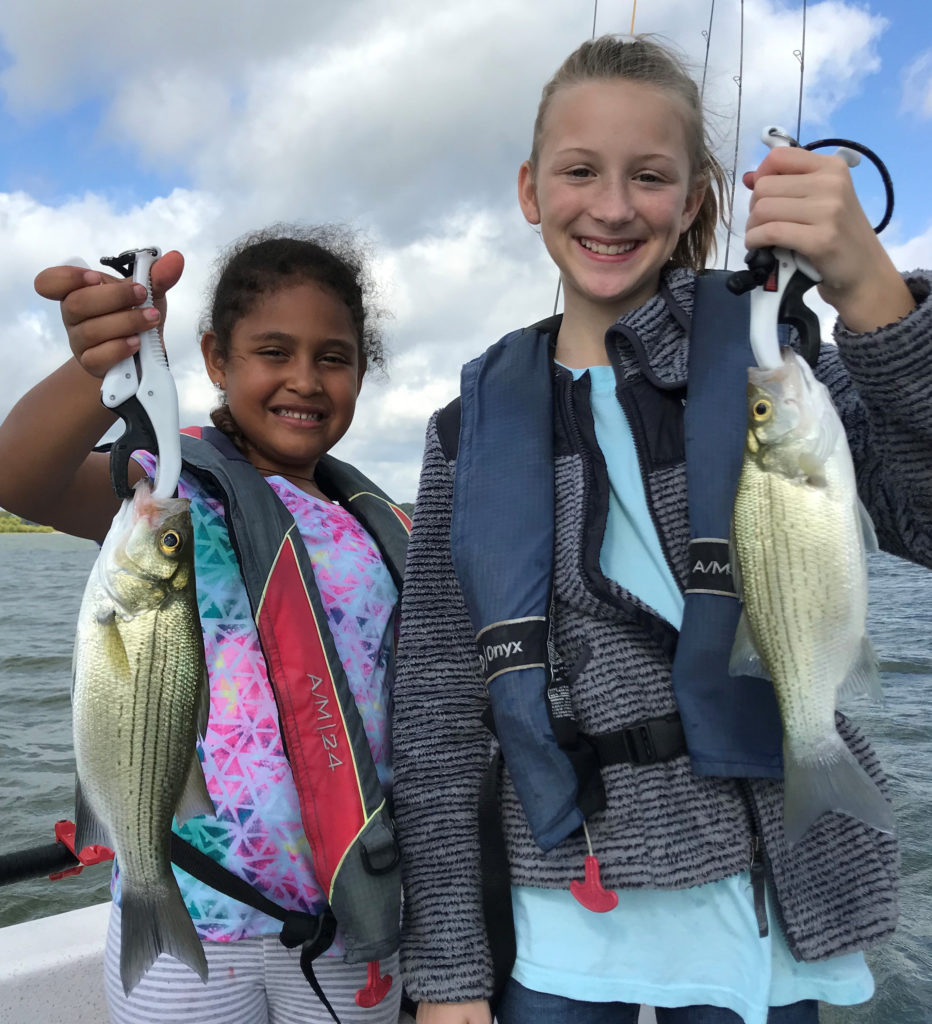 PHOTO CAPTION:  … and, of course we caught plenty of white bass.

HOW WE FISHED:    Topwater action was non-existent this morning thanks to SE winds which were a bit too strong, however, the fish which would normally engage in the topwater feeding were still present, and were very cooperative on the downriggers.  Using 3-armed umbrella rigs rigged up with Pet Spoons, the girls landed a total of 21 fish by 7:50am, coming in as singles, doubles, and even one triple.  The downrigger bite in this area died shortly after sunrise and we moved on to chase blue cat.

The bluecat I found this morning were in a bit deeper water, holding around 35′ deep over a 40′ bottom.  They responded readily to chum and took our punchbait suspended at 35′ with slipfloats quite readily.  By the time the novelty wore off  on catching these, there were hundreds of bluecat beneath the boat.  We left them biting in order to keep things interested for the girls, but could have sat there and continued catching for quite a while longer.

Our last effort was made in targeting bottom-oriented and heavily schooled white bass using tailspinners viewed on Garmin LiveScope technology.  The girls just seemed to intuitively pick up on what was what on the screen — bottom, fish, and their lures — to name a few.  We landed fish after fish in a nice frenzy right up until a 4.5 pound freshwater drum entered the scene.  When it got finished pulling and fighting and charging around, the smaller white bass had departed, never to return.  So, we wrapped up the trip right at the 3.5 hour mark by landing a few more fish each on the downriggers and then the girls headed to Freddy’s for lunch.  The girls were a pleasure to have aboard, got along well, were considerate to me, Yvette, and one another, and they sure can catch fish!!

Sky Conditions:  A low band of grey, sun-obscurring cloud cover in the east formed as the sun rose, thus extending the low light period this morning; clouds continued  to build in all morning, quickly gradually to 70% coverage, then reversing that trend by around 10am. 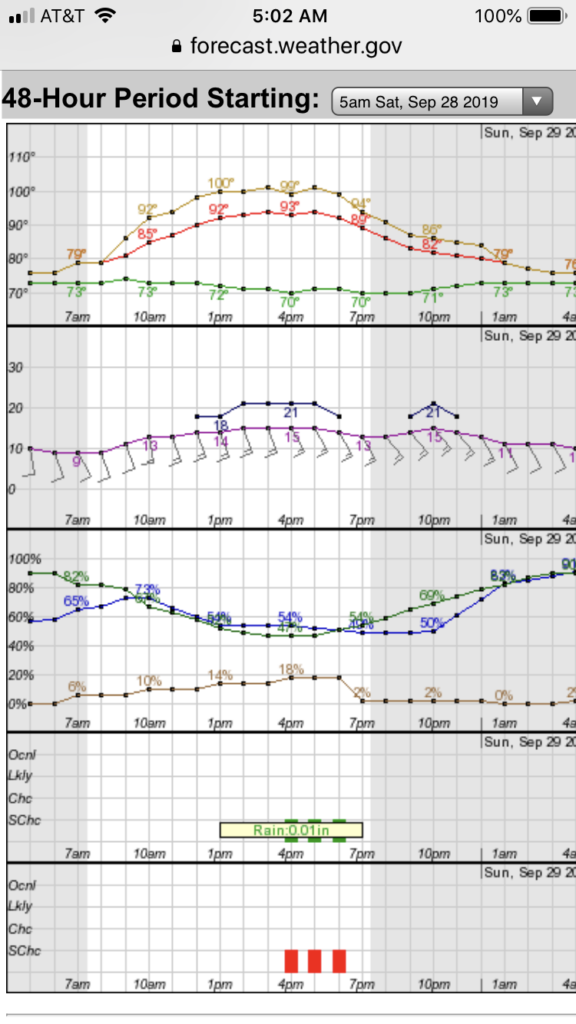 **Area 812 was center of mass for solid, low-light downrigging for fish which refused to feed on topwater, including quality whites and short hybrid