WHO I FISHED WITH:  This past Thursday I fished a full day trip with Randy and Patti Vines of Lubbock, Texas.  The Vines are a retired couple who love to fish and do a good bit of traveling inside the state of Texas fishing for all different species of fish in all seasons and conditions, sometimes with guides, and sometimes on their own.  Randy retired from working at a power plant and Patti retired from certified public accountant work.

I offer full day trips October through February when the days are cooler and shorter, and when the midday lull between the morning bite and the afternoon bite is also short.

Due to the incoming cold front, which was forecast for the afternoon, we fished a long morning trip (5.5 hours versus 4 hours) and then fished from 2:00 to 5:50pm, with an off-the-water lunch break in between.

The Vines originally scheduled 2 full days of fishing, but the incoming cold front saw to it that Friday’s effort would not come to be, thanks to straight-line winds over 20mph all day, with gusts to 30mph. 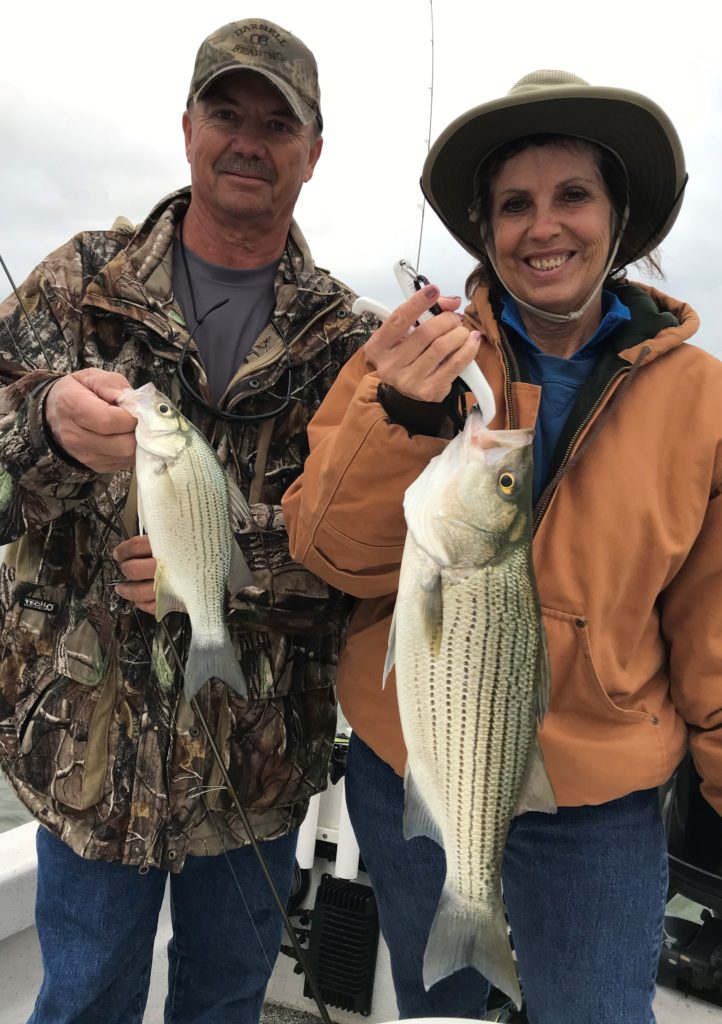 PHOTO CAPTION:  Randy is a good sport and secure in his manhood!  I’ll bet not 2 in 100 men would let me take a photo with their wife holding a bigger fish than the one they caught.  Nice catch, Patti!!  I will say that Randy was not grinning as widely as Mrs. Pat as this photo was snapped. 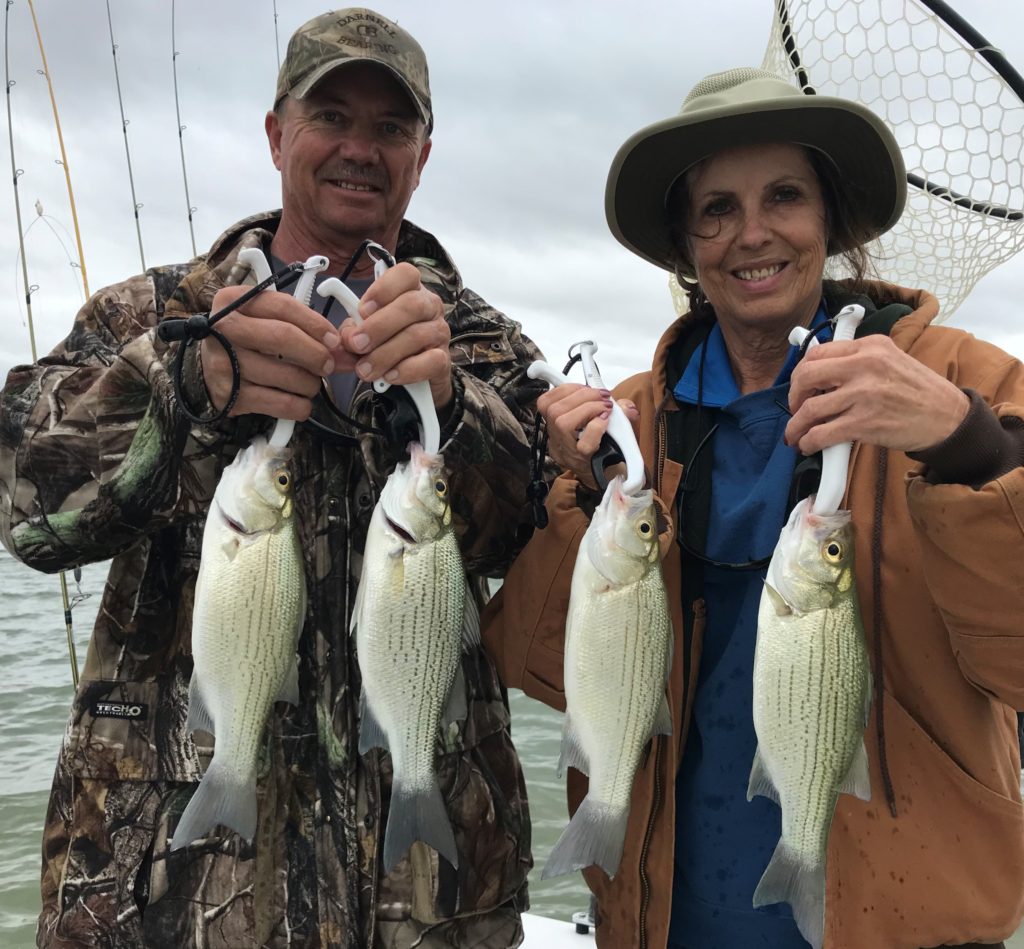 PHOTO CAPTION:  We had to sift through a bunch of this year’s crop of white bass to catch keepers, but the action was strong and steady and the chance of getting an nice white bass was there all day, from sun-up until the weather drove us off the lake.

MORNING PORTION: In the morning, we started off downrigging before the obscured sunrise.  We put a total of 23 fish in the boat using 3-armed umbrella rigs equipped with Pet Spoons chosen to match forage size.  Although a few fish went up shallow during this low-light feed, most hung back in 20-25 feet of water.

After the downrigging ended, we spent the remainder of the morning vertical jigging with tailspinners used in a smoking-style retrieve.  We hit only two areas, both in 30-35 feet of water.  The first gave up 50 fish including white bass and hybrid stripers; the second area gave up 77 fish, all of which were white bass. With the water temperature still in the low 70’s, the fish were chasing long and hard.  We concluded the morning portion of our trip after landing our 150th fish.

AFTERNOON PORTION: We got back on the water at 2pm, mainly so I could be sure to give the Vines a full 8 hours of fishing if the weather turned bad before sunset (which it did).  For variety’s sake, we started the afternoon gunning for bluecat using chum to bring the fish in after finding them on sonar, and using prepared baits to catch them.  We landed 28 fish in 42 feet of water before the bite slacked off. We then got right back on the white bass with tailspinners, catching fish right up until the cold front hit.  During this time we hit two more areas, the first and second in 30-35 feet of water and the second in 27 feet of water.  All three areas were somewhat wind-sheltered (even though the wind was not blowing all that hard), and, as the pressure began to change in advance of the cold front’s arrival, gamefish began to get extremely active, chasing shad to the surface and throughout the entire water column.  Our last area fished gave up a final 60 fish in only about 40 minutes’ time.

When the winds went calm we could see eerie black clouds out toward Gatesville and we knew it was time to go.  We ran back in and, as I pulled the boat onto the trailer the north wind began to blow.  By the time I stowed my gear and got on the road to head home, the temperature had dropped from 76F to 57F.  By the time I made it home it was pouring, blowing, and dark.

OBSERVATIONS:    If I could have custom-ordered a set of autumn weather conditions, the conditions we had today would be it.  We had manageable winds with a southerly component all day, we had light grey cloud cover all day, and we had a front move in, thus allowing us to enjoy that pre-frontal uptick in activity in the hour or so before the wind-shift. 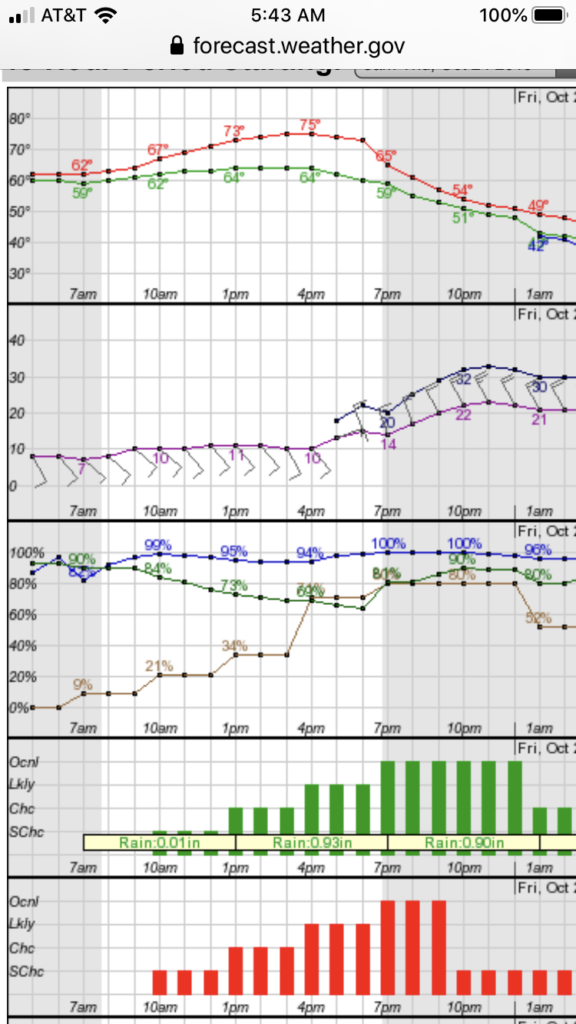