WHO I FISHED WITH:  This past Saturday I fished with the leadership team of Real Star Property Management LLC — Eli and Isaac Schlabach and Brandon Griffith.  This was the crew’s third trip with me, in addition to a sonar training I did with Eli and Isaac back this past summer.

The fellows originally scheduled near back-to-back trips in late summer this year, so, instead of doing the same thing twice, I suggested they delay their second trip so as to allow me to introduce them to cool weather tactics.  Fortunately, this panned out well yesterday.

This makes the third time now we’ve had a significant cold front blow through in which the day after the front’s passage we’ve still had sufficient winds from a northerly direction to move the water, versus the often still conditions that can be a part of post-frontal weather.  Although the clear, dry, cold “bluebird” skies still existed, the wind trumped all of that and allowed us to keep right on catching fish today, and with very sparse traffic on the lake thanks to the 45F pre-sunrise temperatures and brisk breeze which created a wind chill 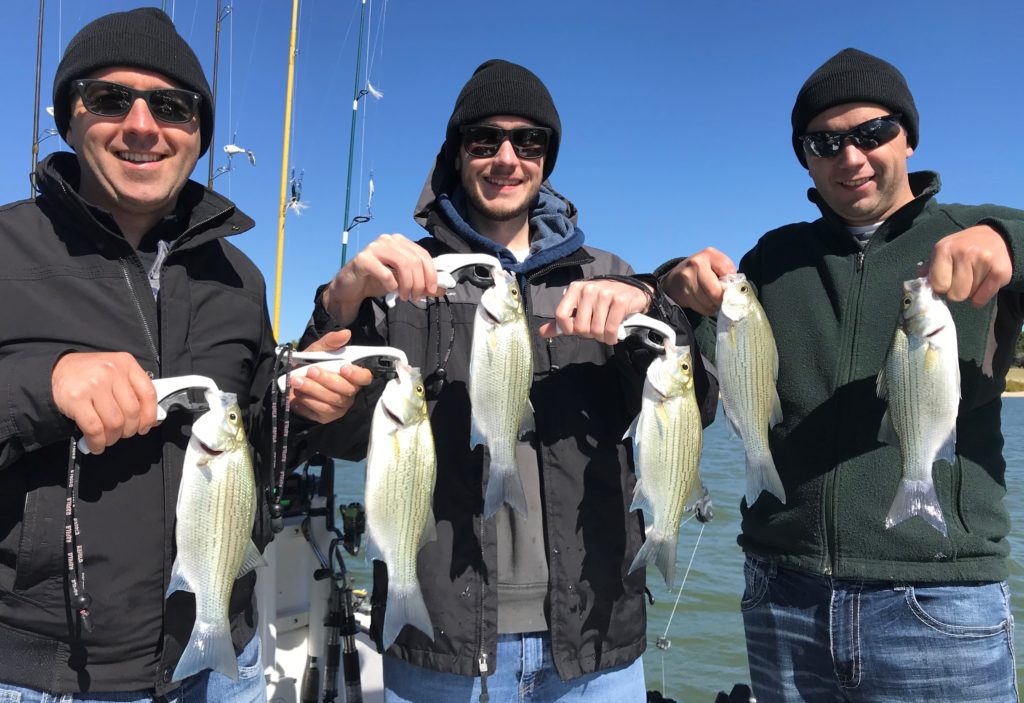 PHOTO CAPTION:  From left: Isaac Schlabach, Brandon Griffith, and Eli Schlabach, each with a pair of white bass taken on tailspinners in 25-28 feet of water. 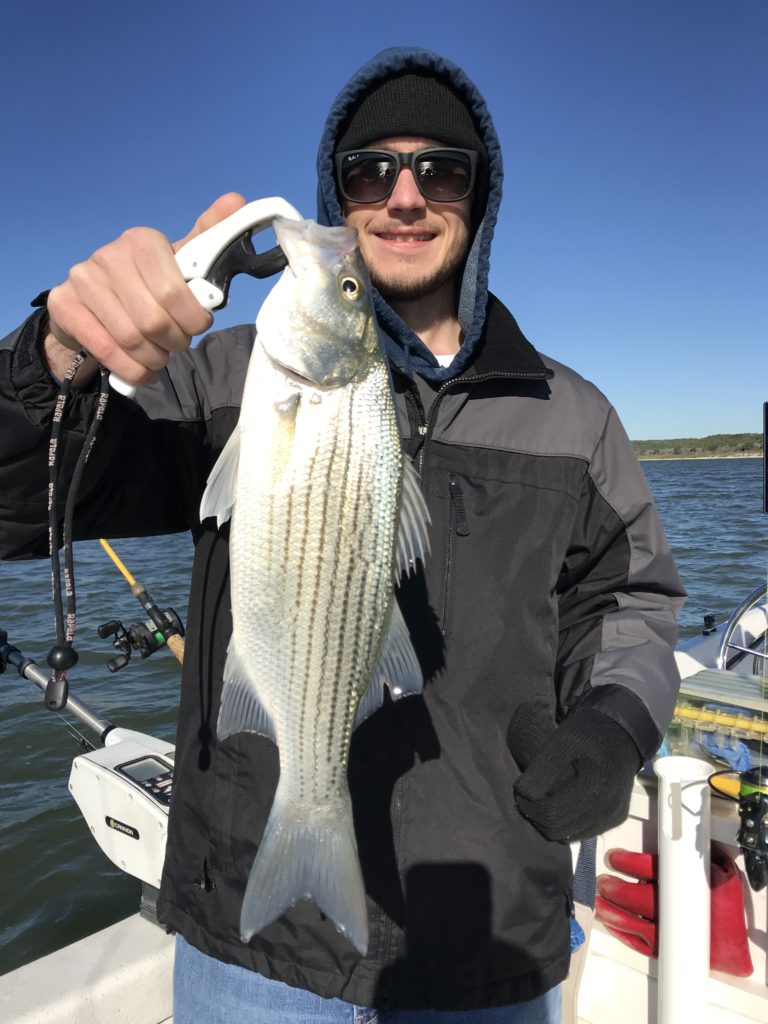 PHOTO CAPTION:  Brandon had become accustomed to the smaller whites we were catching when this just-legal hybrid took ahold of his presentation. 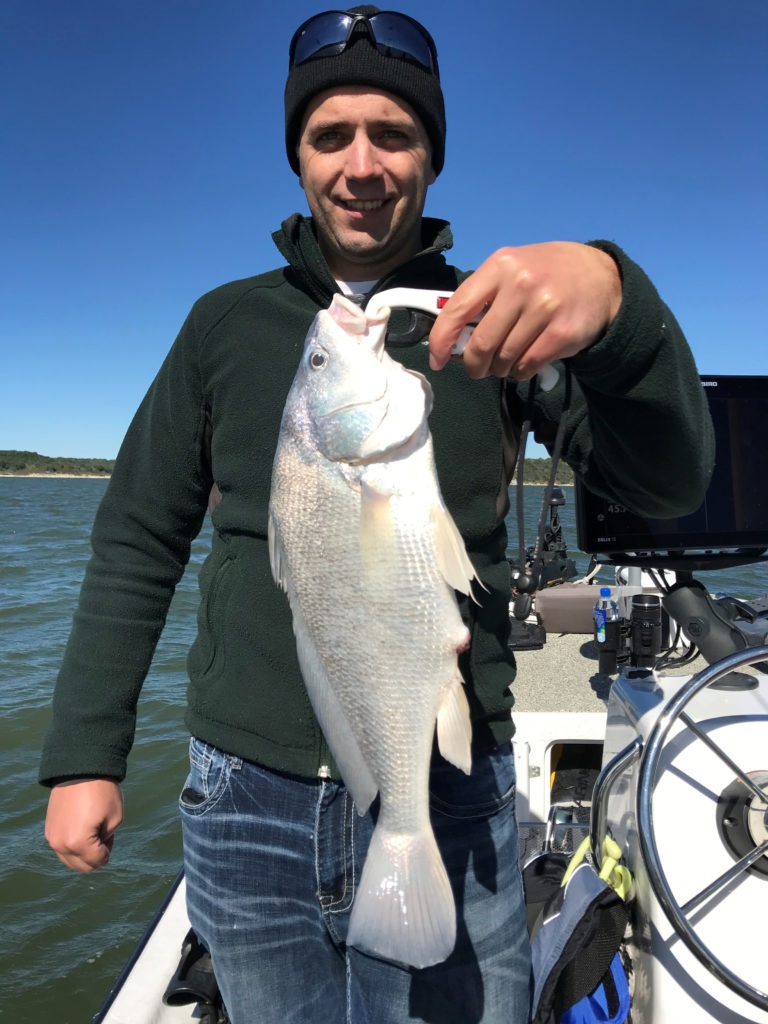 PHOTO CAPTION: Eli took this nice specimen of a drum.  Drum haven’t made up a large part of my catch lately because I haven’t really been using slabs much with the water still in the 70’s.  That’ll all be changing real soon. 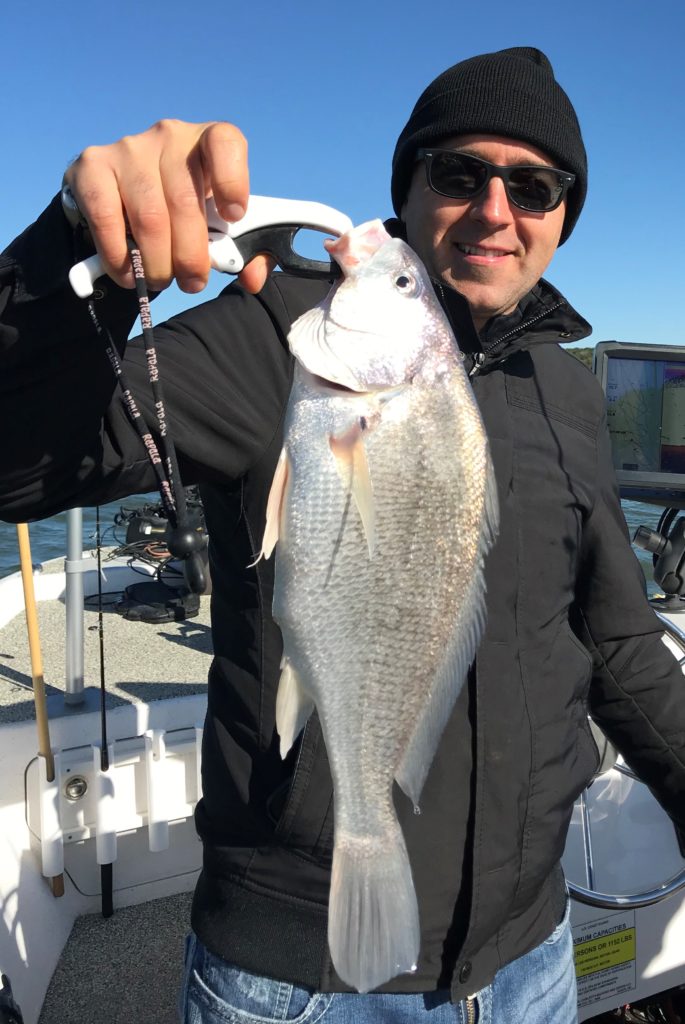 PHOTO CAPTION: Isaac took this drum on a tailspinner.  The fish, which we watched chase and strike the lure on Garmin LiveScope, came about 15 feet off bottom, following the lure before catching up to it and taking it.

HOW WE FISHED:  We fished this trip in 3 distinct segments.  Just before, during, and after sunrise we downrigged in 20-25 feet of water for schooled and moving white bass cruising along the bottom just 0 to 4 feet off bottom in pursuit of shad.  3-armed umbrella rigs with Pet Spoons did the trick on these fish, giving up singles, doubles, and two sets of triples, yielding a total of 23 fish before that fishery shut down with the rising, brightening sun.  I believe the days of shallow forays at dawn up into the 12-15 foot range will probably disappear with the chill brought on by this cold front.

Next, we sought out schools of tightly congregated white bass holding on slow-sloping terrain which we targeted with a smoking tactic using tailspinners.  The fish we found this morning were a good 5-8 feet shallower than where we’d left them under Thursday’s pre-frontal conditions.  25-28 feet of water produced well this morning for another 74 fish, including white bass, hybrid striped bass, and a few drum.  Our tally now stood at 97 fish by about 10:45am.

Our last effort targeted blue catfish.  Strangely enough, the blues we found this morning were in the deepest water I’ve found them in throughout my blue cat experimentation this season — around 47 feet.  We chummed ’em in and caught ’em up — 39 catfish in all, with a few channels amongst the blues.

OBSERVATIONS:    1) On 12, 22, and 26 October Belton continued producing well after a cold front’s passage thanks to continuing winds from a northerly direction at 9-12 mph.  2) The white bass we found this morning were a good 5-8 feet shallower than where we’d left them under Thursday’s pre-frontal conditions.  25-28 feet of water produced well. 3) The blues we found this morning were in the deepest water I’ve found them in throughout my blue cat experimentation this season — around 47 feet.

Wind Speed & Direction:  NW12 at sunrise and steady for the entire morning 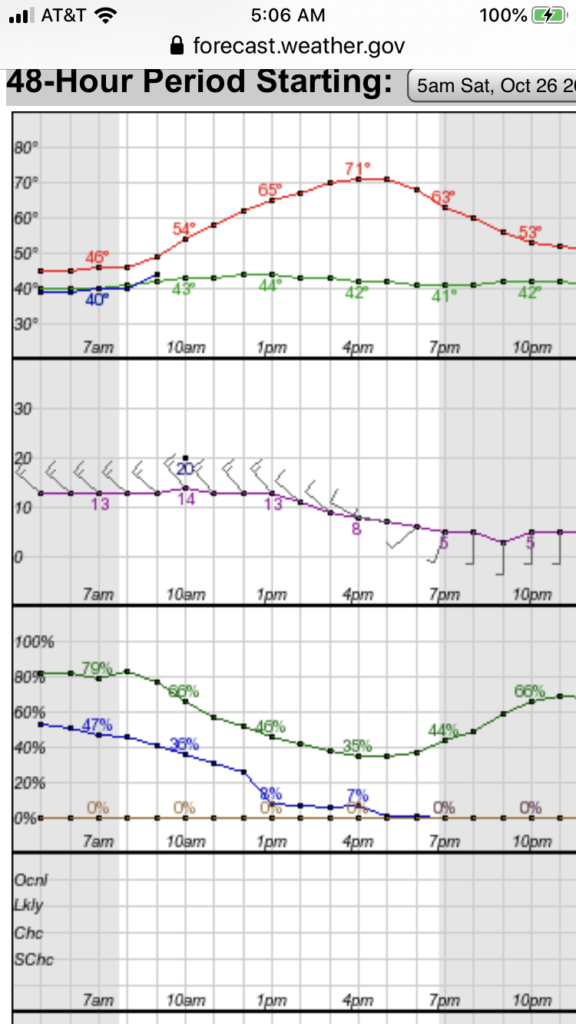