WHO I FISHED WITH:  This cold, rainy morning I welcomed aboard friends who came to know one another while part of the Texas A&M Corps of Cadets — Doug Blackwell and Grant Olbrich.  The men were in the same unit at A&M and have remained friends through the years.

Doug and his wife live in Killeen where Doug works in the pawn business.  Grant and his wife now live in the China Springs area near Waco, following Grant’s retirement as a colonel in the U.S. Marine Corps Reserves, as well as from Delta Airlines where he worked as a pilot.

Both fellows are godly men, so the conversation today was encouraging and good-natured, despite the inclement weather.  Grant recounted how his grandfather, who resided in Westphalia and Temple, taught him to fish on Lake Belton, so it was a bit sentimental to return to the lake many years later.  Sadly, Doug lost his dad exactly 50 years ago on this date when he was only 6 years old.  Both fellows had fond memories of catfishing as they were growing up.  In fact, Grant shared that he proposed to his wife over a jason jar full of stinkbait! 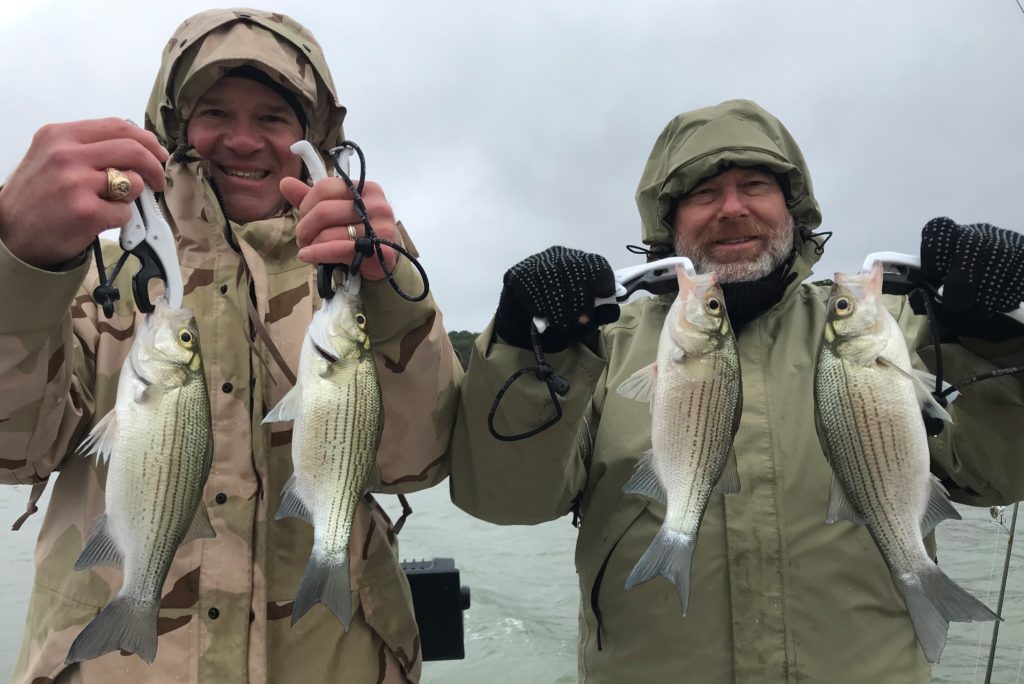 PHOTO CAPTION:  That’s Grant on the left and Doug on the right. Between Grant’s red hands and nose and Doug’s gritted teeth, you can bet it was chilly out there today.  NOAA showed a windchill factor of 39F for the entirety of the trip.  I suppose those Aggies just weren’t going to be outlasted by a West Pointer, though!

HOW WE FISHED:   Due to the short day length and heavy cloud cover, we really didn’t have enough light to see well until around 7:35am.  Additionally, there was much “sea smoke” as the lake gave up surface heat and created a mist at the surface which was patchy in nature and which was blown by the wind.

We found white bass in three distinct areas this morning, putting exactly 50 fish in the boat at our first stop (vic 1177), including 1 drum, 1 hybrid, 1 largemouth bass, and 47 white bass (BA).  We moved on after catching these 50 fish, as the majority of the white bass were smallish.  Thus far this season, moving to leave small fish in hopes of finding larger ones really hasn’t paid off, but, it never will if I don’t experiment now and then, and both Doug and Grant were okay with the move.

We moved to our second area and put another 18 fish in the boat, including 1 drum, 1 hybrid, and 16 white bass.  The “keeper to short fish ratio” was a bit better here, so we were glad we made the move.

As these fish settled down, I let the fellows know we could move again and do more of the same vertical work with tailspinners, or, make an attempt at drawing some catfish action.  Since both fellows had grown up fishing for cats, this appealed to them, so, off we went in pursuit of catfish.  We chummed them in and then caught them with prepared baits in about 32 feet of water.  It was interesting to note that of the 14 cats we landed today, half were channels and half were blues, with all of the blues coming early in our stop with the channels following.  As the catfish bite slowed, our tally was at 82 fish landed.  I offered that we could hit one more area for white bass to round out our day’s catch at right at 100 fish, then head in so the fellows could pay a visit to Mr. Dirk Miller over at Miller’s Smokehouse in Belton before parting ways.

We looked at two areas, finding no fish home at the first, and then plenty of white bass holding at the top of a breakline which began in 25 feet of water.  We worked our trusty tailspinners, but a final 18 fish in the boat, and as we did, Doug hooked his lure onto the largest guide on the rod and sat down, readying himself for the final boatride to lunch.

OBSERVATIONS:  (BA = 12G x 2)  1) Yesterday’s scouting certainly paid off.  The fish I found yesterday did the same things at the same times and in the same places this morning, thus letting us do much more catching than fishing. 2) The lake has now turned over.  There was no sulphuric odor coming over the dam yesterday morning, and, today, when I did a temperature profile at 5-foot increments down to 60 feet, the water was a uniform 68.6F from top to bottom. 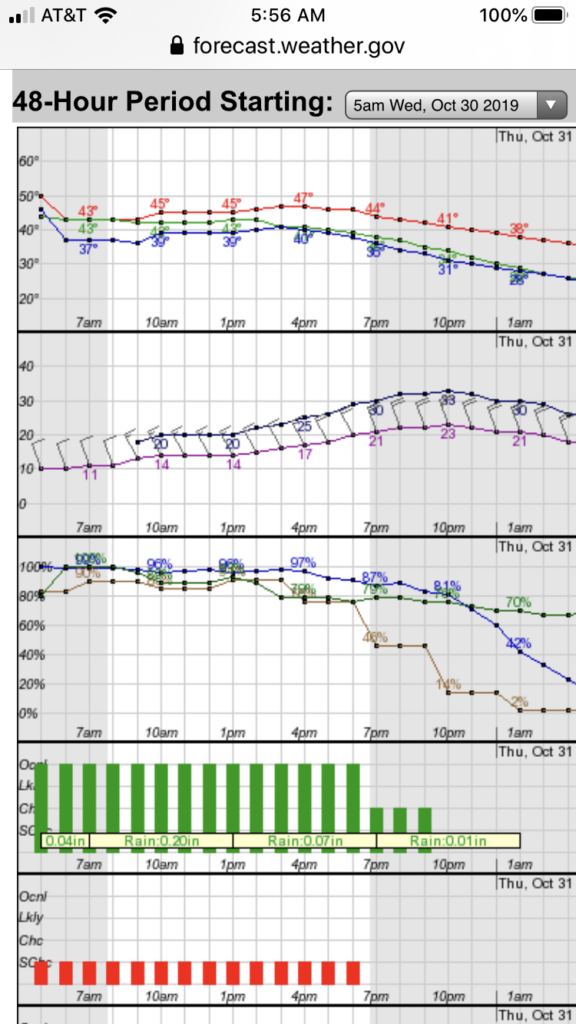