WHO I FISHED WITH:  This morning, November 1st, 2019, I fished with returning guest Oscar Leal of Georgetown, and his son-in-law, Kevin Garlick, of Round Rock.  This was Oscar’s third trip with me this year; he was accompanied by his good friend Dwight Stone on his first two trip’s out with me.

Oscar, after retiring, went back to work at AMD in south Austin where he does product testing on the hardware side of the house.  Kevin is in sales for a national company focused on various forms of security systems.

If the weather cooperates, we hope to get Kevin’s kids (Oscar’s grandkids) out on the water next weekend.  As an incentive, Kevin took some live video of the Garmin LiveScope in action.  Evidently the kids are into the new VR (virtual reality) gaming, and, according to Kevin, the LiveScope is even better than VR!

With the water temperature falling through the white bass’ preferred temperature range of 62-74F (my observation), the action is really hot and heavy right now.  If there is a downside, it is that there are simply a lot of small fish in the system right now.  For every 10-12 fish caught, only 1 will be of a legal size (10+ inches).  The action, however is incredible, and the bycatch of largemouth, drum, hybrid, and catfish keeps things interesting, as well. 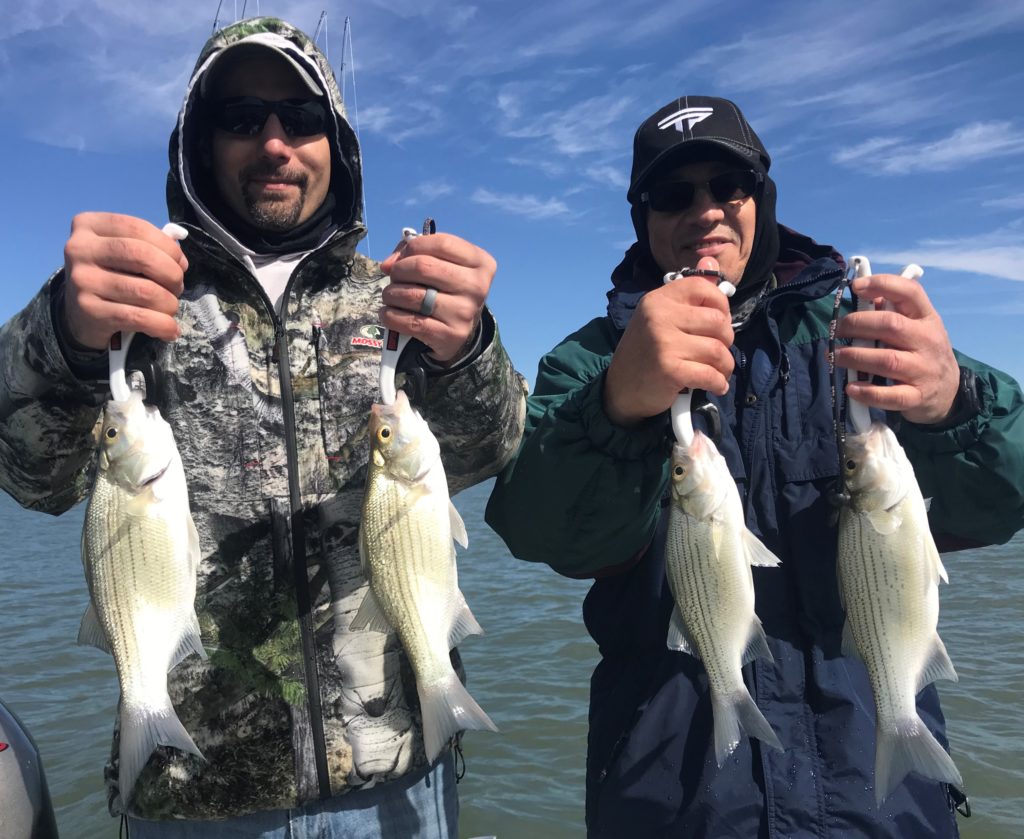 PHOTO CAPTION:   We had to put a bunch of fish in the boat to come up with enough keepers to do a photo to commemorate the trip, but, the action was non-stop this morning after the returning southerly wind began to blow just after 8:30.  Every one of the 153 fish we landed this morning came on a tailspinner. That’s Kevin Garlick on the left and Oscar Leal on the right. 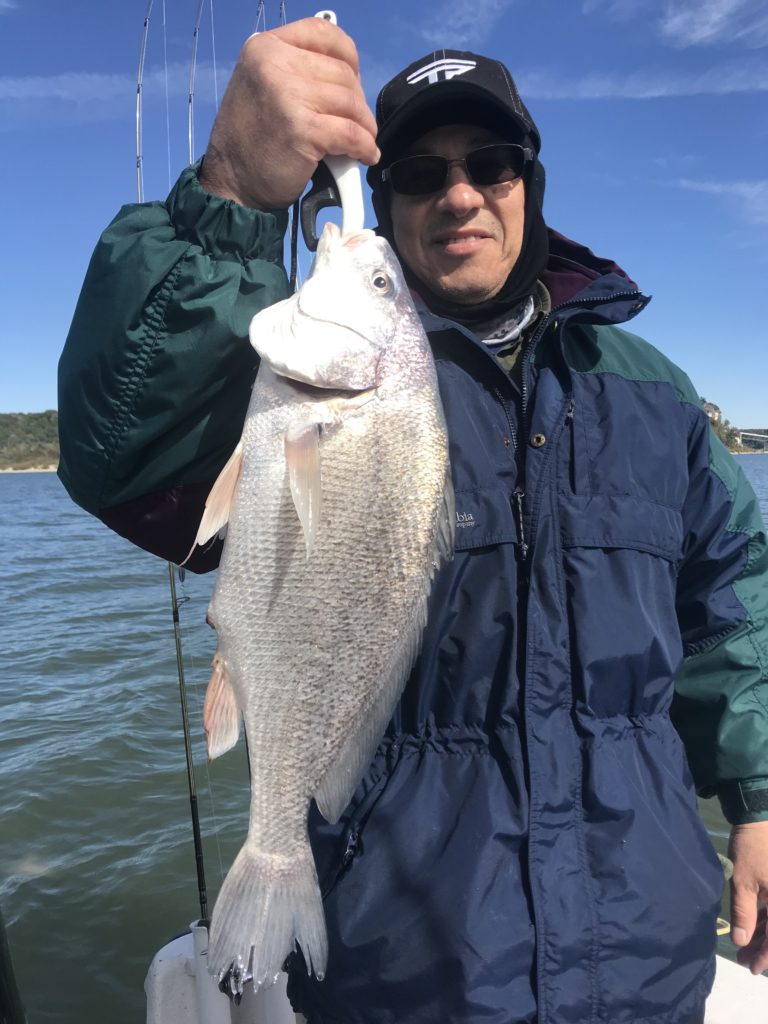 PHOTO CAPTION: We took a few freshwater drum and one hybrid striper as bycatch today.

HOW WE FISHED:   With the days now short and cold, there is really no need to be out on the water before sunrise.  We met up at 7:30 and still had plenty of time to go over admin, safety, techniques, and pray before we took off after fish.  We waited through a fishless hour while the winds were just barely rippling the surface.  At 8:39 we landed our first fish, and from that point on it was near continuous catching for the rest of the morning.  As the wind speed rose, the intensity of the bite rose with it.  As evidence of this, we put a final 51 fish in the boat in the last 45 minutes we spent on the water, from 11:30 to 12:15.  Prior to that, we’d boated 102 between the start of the bite at 8:39 and departing for our last fishing area around 11:30.

We landed 5 drum, 1 legal hybrid striped bass, and 147 white bass.  Every last fish came on a smoked tailspinner fished at a moderate cadence.  There is no other way to put it — there are just a lot of small white bass in Belton’s “system” right now.  No matter what I try or where I go, I know I’m going to have to sift through 6-12 short white bass before landing one of substance.  There is a definite gap between the smallest fish, which max out around 8.75 inches, and the next year class which stretches to just over 12 inches.  It is my theory that because we have a lot of small bait (thanks to a very successful shad spawn this spring), all the white bass are mixed together.  If there were an abundance of larger shad which this year’s crop of white bass would be too small to consume, there might be more segregation between year classes.  I don’t really have a way to test this, nor does it really matter.  Regardless, the action is great!

OBSERVATIONS:    We experienced our first frost overnight last night.  As I drove to the lake between 6:30 and 7:00am, the temperatures in the low spots reached as cool as 24F 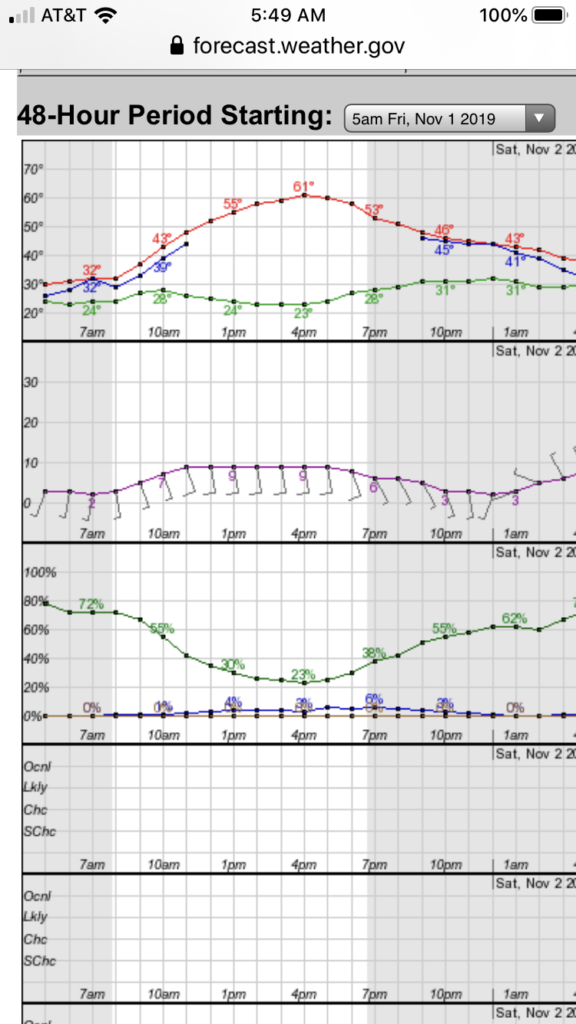