WHO I FISHED WITH:  This past Saturday morning, November 2nd, I fished with returning guests Jim Downing and Eric Martin.  Although I’d fished with both men previously, they’d never before come out together.  This turned out to be a win-win situation, as my original party had to postpone due to a death in the family, and Jim’s opening day of deer season plans also fell through.  When I posted on Facebook that I had a last-minute opening, he jumped on it and brought Eric with him.  Unfortunately, the two “other guys” Jim invited thought it would be too cold to fish, and wound up staying home.  Jim was quick to send them both texts when our fish count reached 100, letting them know they zigged when they should have zagged. 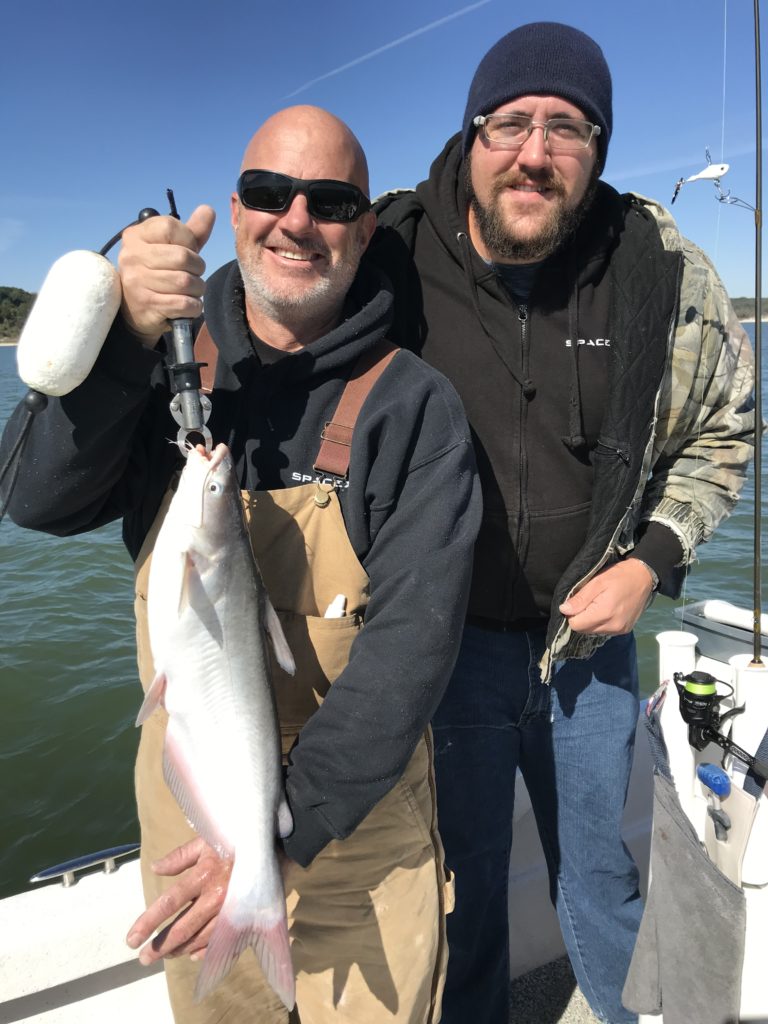 PHOTO CAPTION:    This is why they are called ‘Multi-species Trips’ — be it large drum, cooperative catfish, or a bunch of white bass, not being set on one fish and one method allows the flexibility to pursue what is biting well.  We set aside the final hour of this morning’s trip to finding and catching deep-water blue cats.  Jim Downing came up with this 4.75 pounder right around noon.  That’s Eric Martin looking on. 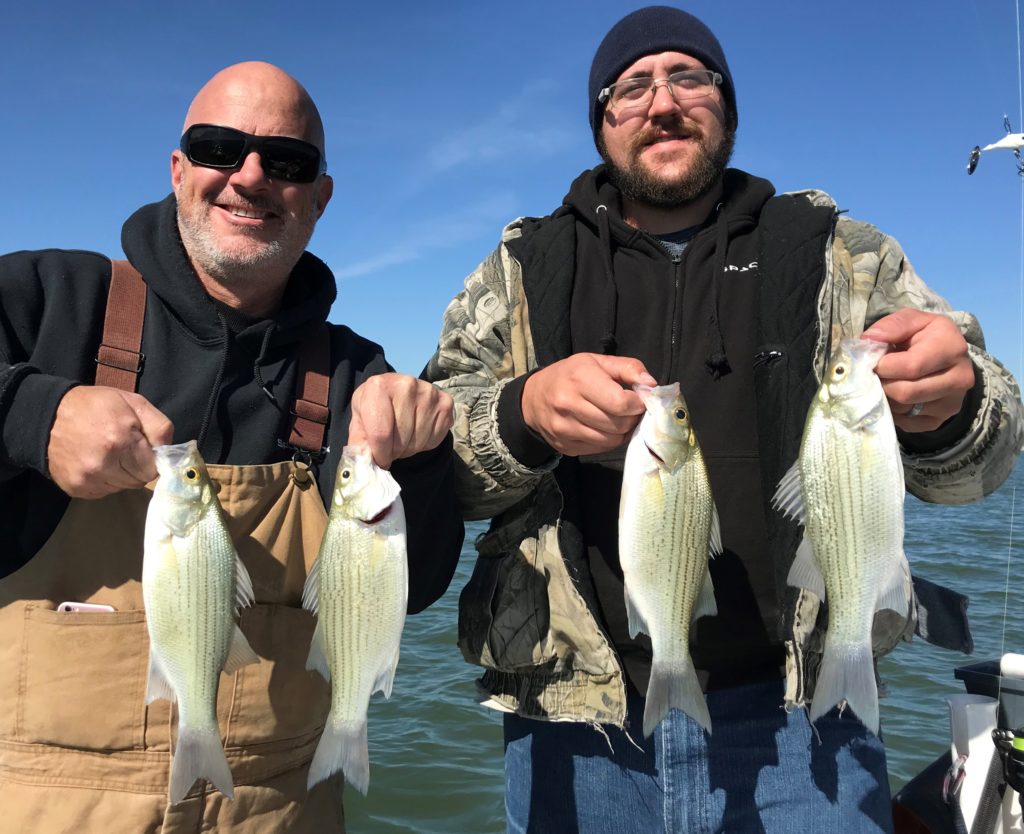 PHOTO CAPTION:  We didn’t go catfishing until we’d landed at least 100 fish by way of vertical jigging first.  Although the fish were not quite as aggressive as during times with cloud cover, the fish bit well after around 8:45a, despite a mild cold front moving in and reinforcing the already cool weather in place.

HOW WE FISHED:    Fishing was much today as it has been for the past several weeks since the weather has cooled down.  We used sonar to search for and pin down the locations of heavily congregated white bass in water from 30-36 feet in multiple areas, relying heavily upon the target separating capabilities of down-imaging and side-imaging.  Once these fish are found, we used the i-Pilot Link capability of my Minn Kota Ulterra to give the command (through the sonar unit) to the trolling motor to both go to, and then stay in a hover atop of these fish.

When the fish are turned on, the very first lure dropped among them stirs the hornets’ nest and the bite is on.  Yesterday, each group of fish we got on (3 groups in all) bit well for 35-45 minutes, then tapered off.

The DIY tailspinners I crafted specifically to overcome the various shortfalls of the commercially available versions out there continue to produce better than slabs thus far, although I am sure slabs will begin to outperform the tailspinners once the water cools more and the fish slow down (a time when I rely on my “easing” tactic).

By exactly 10:51am we had landed our 104th fish of the morning.  Since both fellows expressed an interest in catfish, I suggested that we leave our final hour or so dedicated to chasing catfish.  They were excited to do that, so, we “retooled” and got right down to catfishing.  We wound up landed exactly 20 catfish including a few channel cats, with the majority being blues.  Our 3rd to last fish taken this morning was the largest of the trip — a 4.75 pound bluecat taken by Jim.

In our mix of 104 non-catfish caught before we made the shift, we landed white bass, one hybrid striper, one largemouth bass, and several freshwater drum up to 3.75 pounds.

As has been the case for quite some time now, the vast majority of the white bass landed were small.  To keep things sporty, I’ve actually obtained some very nice ultra-light rods through St. Croix from out of their Panfish Series.  With light braid and my 1 oz. tailspinners, even the fight of a small fish can be felt well.

OBSERVATIONS:   Once again, we did not really get into fish until after 8:30, despite meeting up for the trip around 7:30.  This happened on the previous trip, as well, and I attributed that to lack of wind on that day.  This morning, we had plenty of wind before sunrise, so, I’m thinking this is a behavioral thing, not a wind-related issue.  With time change taking place, I’m pushing back my start times this coming week to 7:00 (same light level as at 8:00 before turning clocks back) and until the fish dictate otherwise. 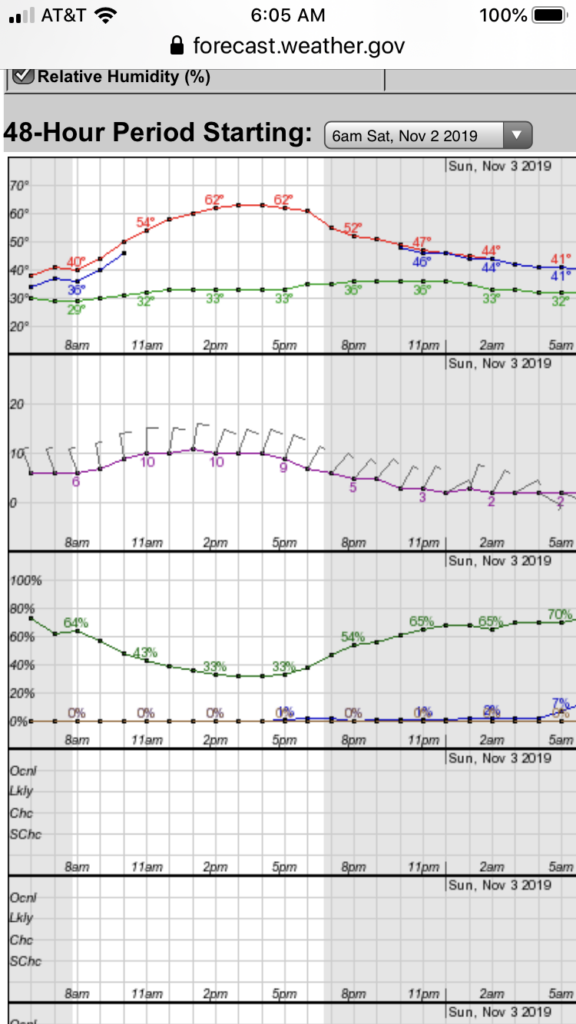 **Area B0015C gave up both blue and channel cats