WHO I FISHED WITH:  This past Wednesday morning I fished with Jerry Worley, his son-in-law, A.J. Shiller, and friends David Vahrenkamp, and Clay O’Dell.  Jerry owns and operates Jerry Worley Insurance Agency in Harker Heights, A.J. is with the Killeen Fire Department, and David and Clay work at Bates Nissan in Killeen.

If it is true that you can gauge the depth of friendship by the amount of criticism you’ll allow to be hurled at you by those referred to as friends, then you’d come away knowing these fellows are pretty tight.  We actually added two new words to the English language during this trip as a result of this tight-knit friendship.

The first, a noun, was the term “Worley”.  Used in a sentence: Oh, you just did a Worley!  This is to say that an angler successfully hooked and played a fish all the way to the boat, only to have the fish drop back into the water before crossing the gunwale into the boat, and thus keeping it from being counted in the day’s tally.

The second, also a noun, was the term “A.J.”.  Used in a sentence: Oh, there goes another A.J.!  That is to say that an angler waited very patiently with his/her rod held perfectly still while waiting for a catfish to strike on a baited hook, only to have such a delayed response in setting the hook that the fish gets away without being hooked, never to return.

I don’t know how Clay and David escaped unscathed, but, remember, I did not go to lunch with them, so, more could definitely have happened after they exited the boat.  Check Urban Dictionary next month for the revisions. 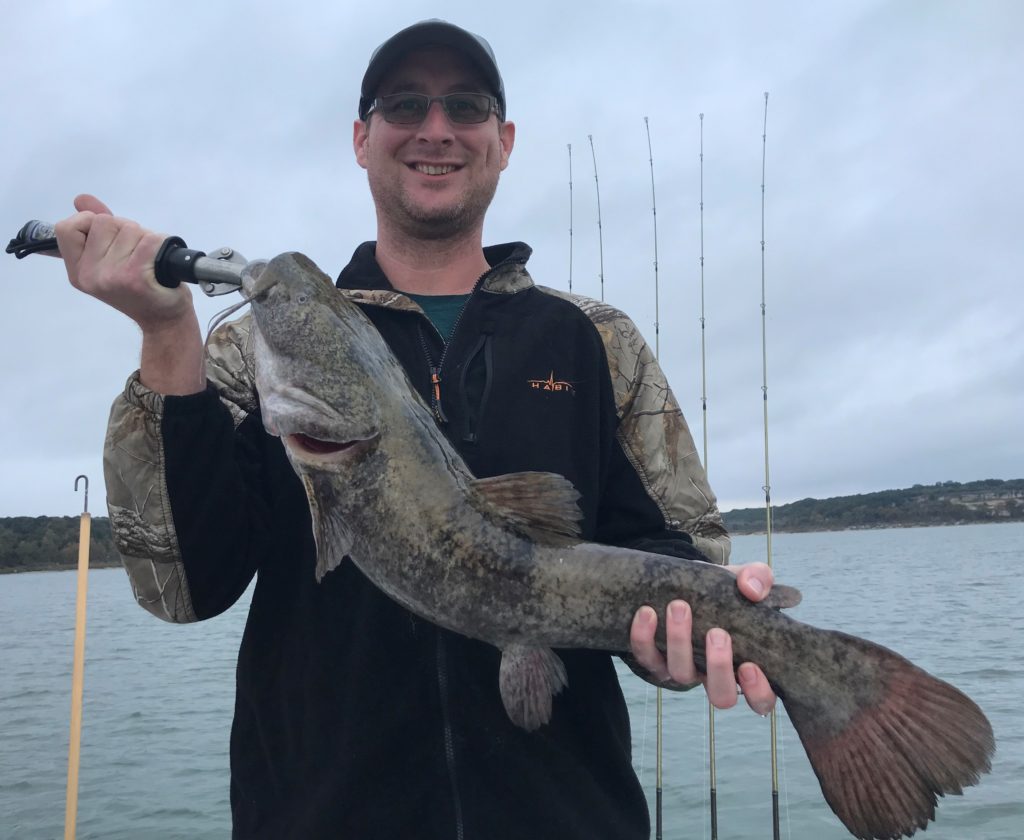 PHOTO CAPTION:   A.J. Shiller came up with this nice 8.75 pound yellow (a.k.a. flathead) catfish from out of 25 feet of water.  We rounded out the catfish roundup with channel catfish and blue catfish, as well.

HOW WE FISHED:  Strong numbers of smaller fish have been the theme this fall when it comes to white bass, and today was right in line with that trend.  We finished the morning out with 125 fish boated, which included 104 white bass, 2 largemouth, 1 drum, 1 yellow cat, 12 bluecat, and 5 channel catfish.  The “short to legal ratio” on the white bass ran right about 8:1 this morning.

With no helpful bird action to key on, we began methodically checking potential fish-holding areas thoroughly with sonar, relying heavily upon down-imaging to sort out fish from the bottom they were holding tightly to.

Over the course of the morning we found 5 different areas which produced fish after checking about twice as many areas.  The fish were not as worked up this morning with fairly mild weather in place.  Each time we found fish, it was only because a small percentage of all the fish present there were holding up off bottom enough to be seen on sonar.  Once we began working baits for those fish, many more fish would become apparent as they lifted off bottom and came in to the commotion.

A number of areas held gamefish, but the baitfish in the area were clearly relaxed and formed in a horizontal blanket instead of being absent or balled up — not good!

The tailspinner is still hard to beat right now given the still-warm water (which actually warmed a bit on the surface over the course of these past few mild days and cloudy nights).

We stayed on the white bass until we’d boated at least 100, then stayed on that final area until it played out after our 108th fish came over the gunwale.  We then changed up and pursued catfish.

The catfish were not super-charged, either.  Although I found plenty of them, they, like the white bass, we a good bit more lackadaisical.  We wound up fishing two areas, with each producing blue cat as soon as we got baits down, followed by channel cat after the scent of our chum and baits had more time to work.

OBSERVATIONS:   Once again, we did not really get into fish until after 7:30 (with DST now over), so, I’m glad I pushed out meeting time up to 7:00 so as to reduce the wait between getting launched and catching our first fish. 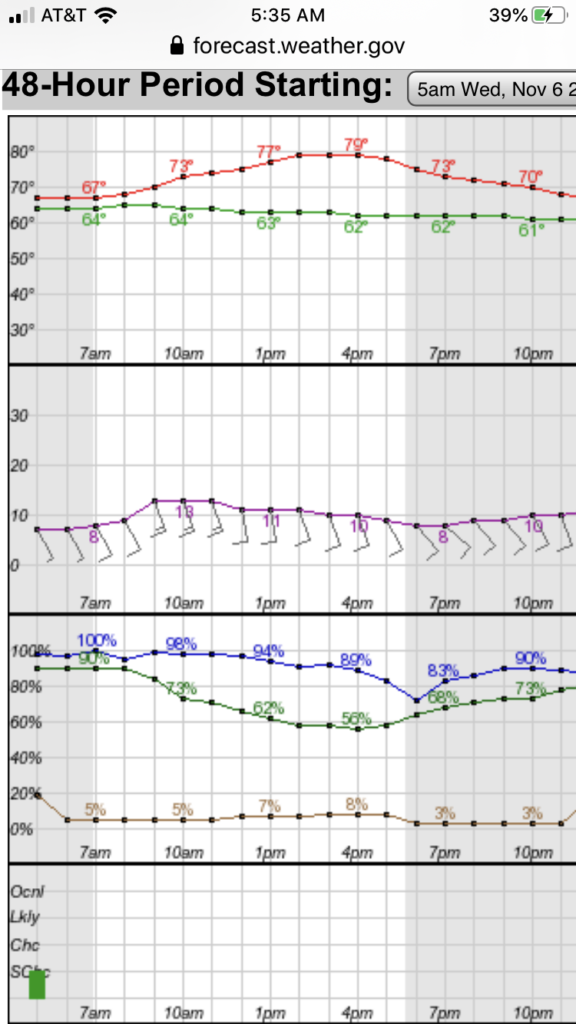