WHO I FISHED WITH:  Due to the possibility that the gentleman I fished with this past Friday afternoon may or may not have actually been as ill as he may or may not have led his employer to believe, he requested that I not use names or photos in this blog entry.  Hey, what happens at Belton can stay at Belton if you so request that!

Originally, Mr. X was supposed to be accompanied by a buddy on a fishing trip today and then the two were to come out on a separate sonar training on their boat on another date, but that buddy suffered a heart attack recently and we scaled back to a one-man combination fishing and sonar introduction/training today only (the buddy is recovering well).

The three things I emphasized before we even got on the boat concerning sonar fundamentals were 1) having a leveled transducer, 2) understanding the shape of the sonar beam for 2D, down-imaging, and side-imaging and how they compare and contrast, and 3) understanding the “black area” running vertically down the center of the screen on a down-imaging view.   With those things pointed out, we began our fishing trip. 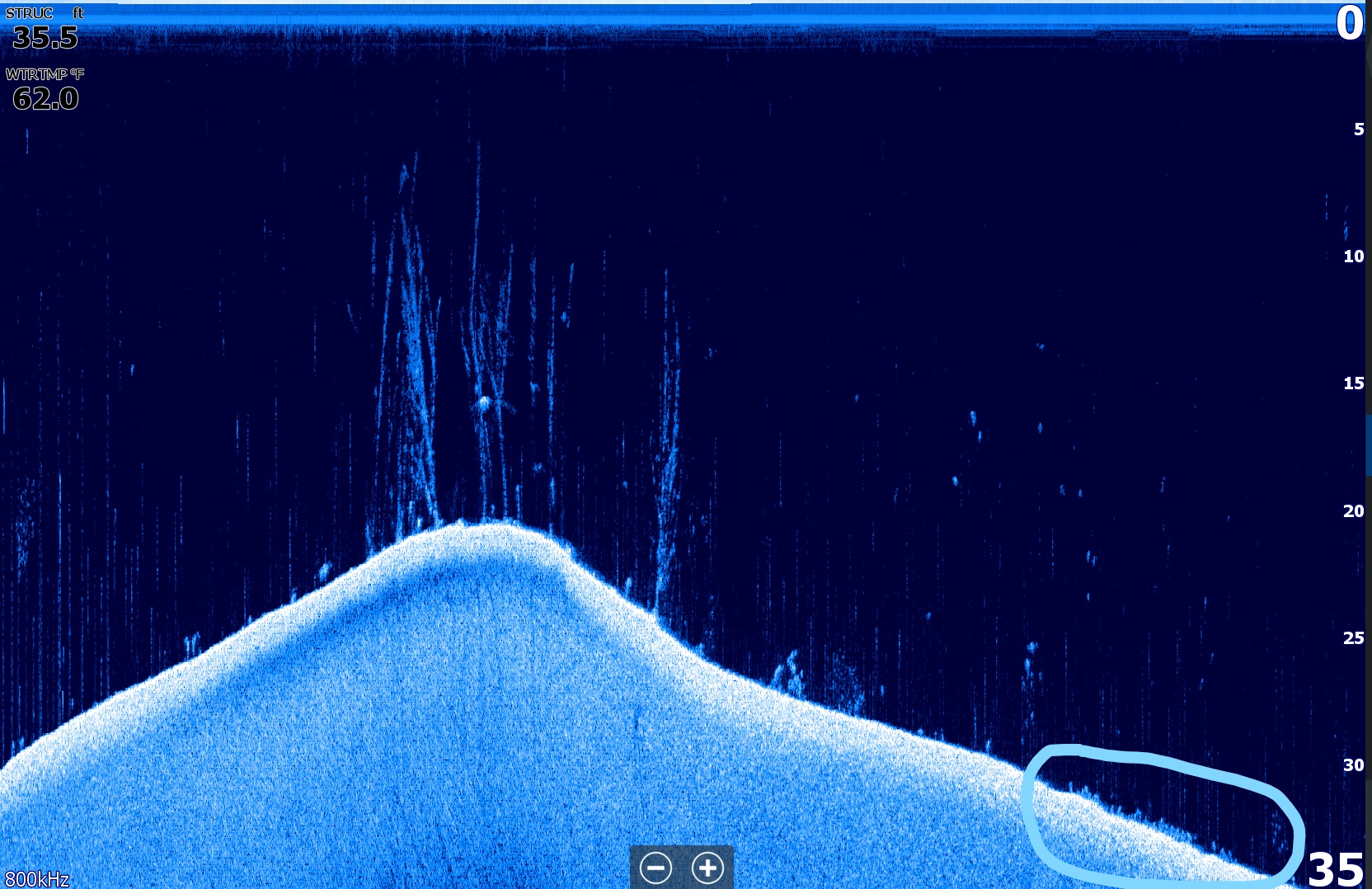 SCREENSHOT #1:   A large school of white bass is shown circled here in 31 to 34 feet of water on a gentle slope.  We found these fish with pre-FishReveal Lowrance DownScan technology, then found the identical school using the lower quality Humminbird Solix 15 down-imaging, then placed a cursor on the fish on the Humminbird screen and used i-Pilot technology to Spot-Lock on top of these fish and caught them until they quit biting. 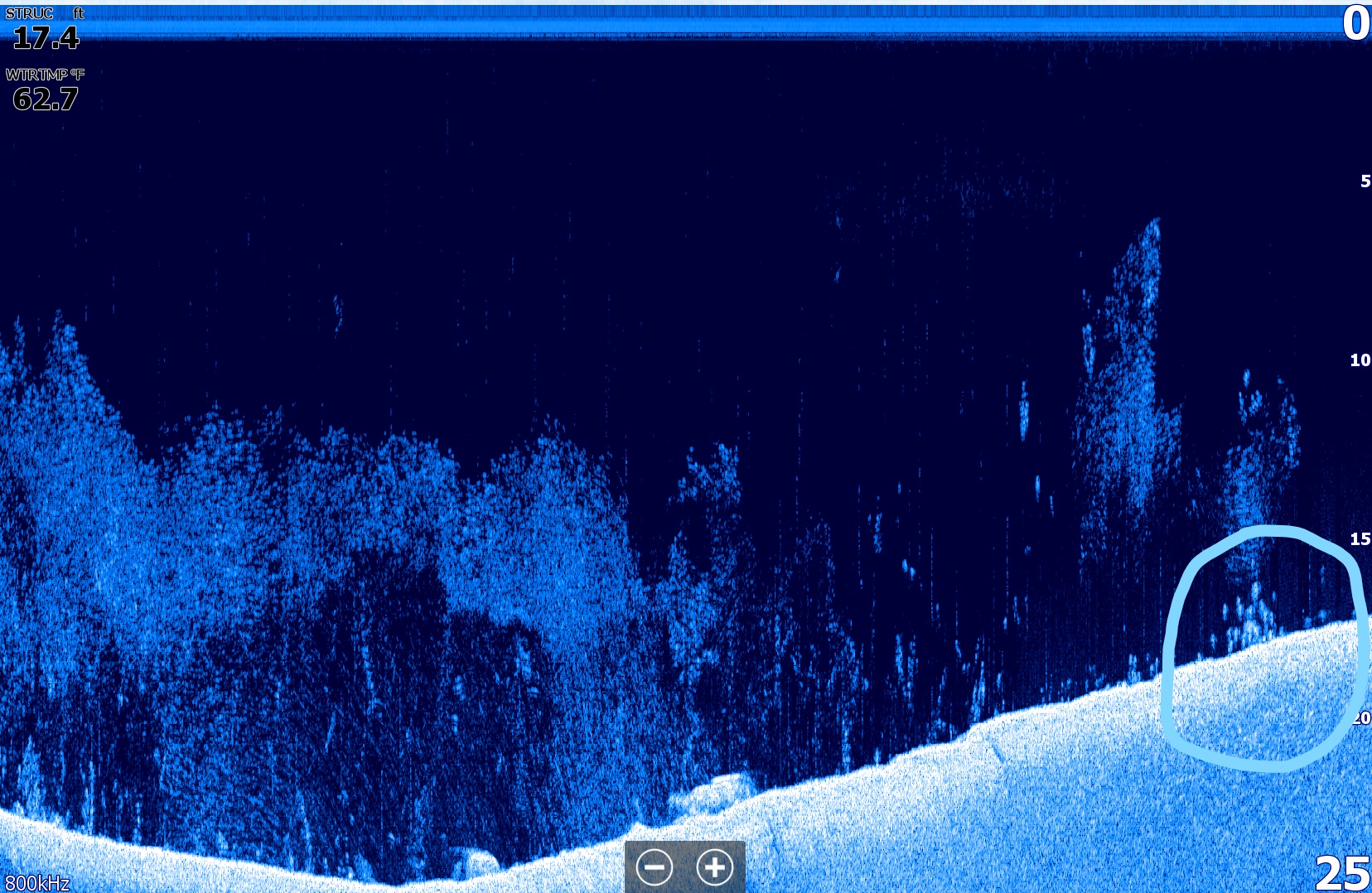 SCREENSHOT #2:  Here, a smaller, but more active school of white bass is shown amidst a massive amount of bait (threadfin shad).  These fish were more active in that they were higher up off the bottom when they initially presented on sonar, and they were more willing to feed than those tightly bottom-hugging fish shown in SCREENSHOT #1. 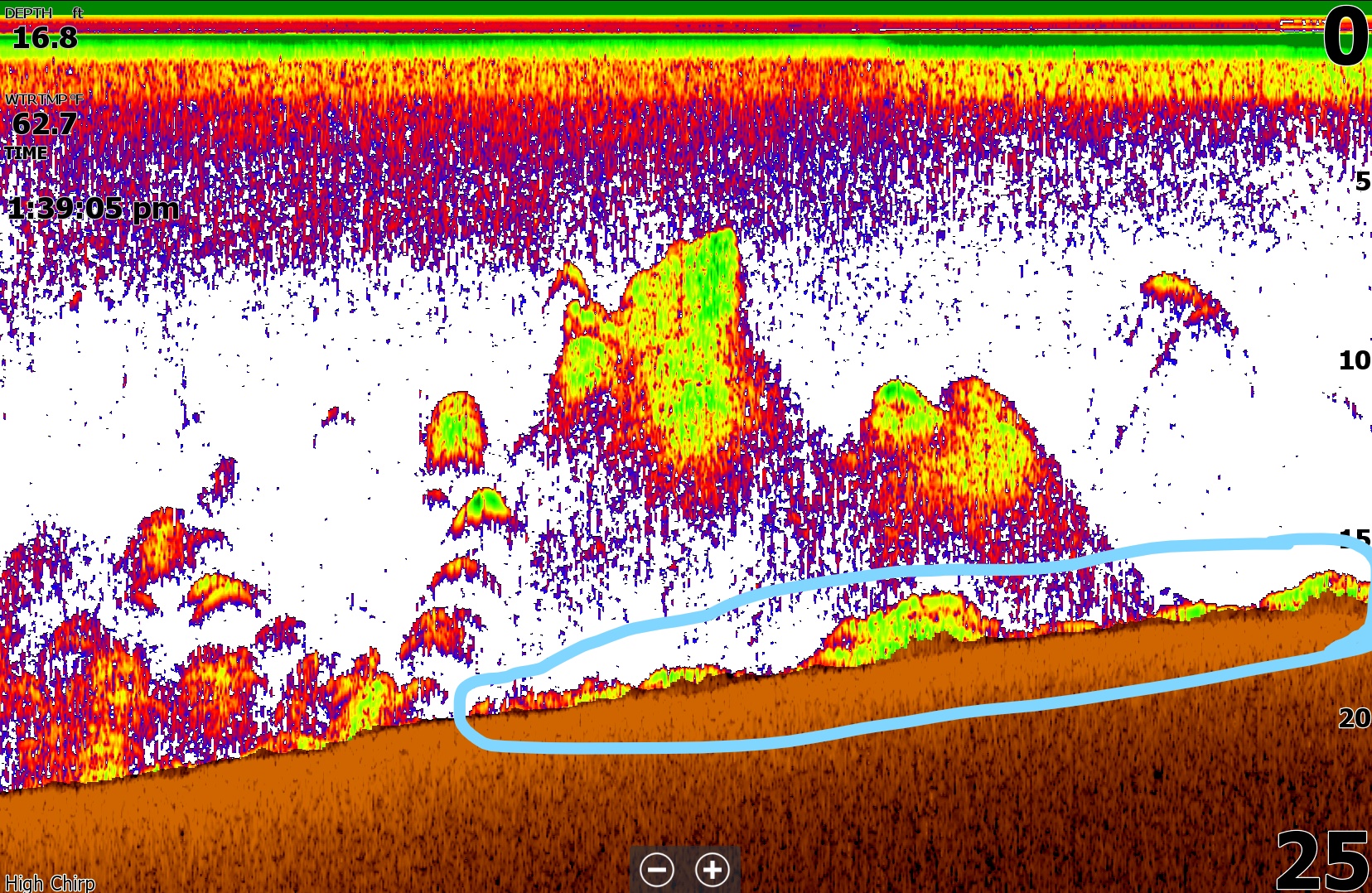 SCREENSHOT #3:   This is the 2D screenshot of the same fish and bait shown in the screenshot above.  Due to its very nature, 2D sonar distorts targets by elongating them, making them “bleed” into other nearby targets, and thus making fish harder to single out than on down imaging technologies.

HOW WE FISHED:   We did a lot of “running and gunning” this afternoon for a few reasons.  First, we had bright skies and calm winds and the fish were less than enthusiastic.  Once we found some, there typically weren’t a mess of them, and they typically didn’t stay fired up very long.  Second, I wanted to first show Mr. X what to look for, then have him find and point out to me what we were looking for before saying anything to him first, so we could test whether or not he was interpreting fish signatures correctly.  The more practice, the better, so, once a bite started to let up, we were gone looking for another bite. Finally,  I had a request come in from Clay Lohse out in Abilene to send some screenshots, so I wanted to grab a few while Mr. X was training.  Clay is behind the “Respect the Fish” YouTube channel and is putting together a video about cool season location of white bass

All of our fish came on tailspinners fished vertically.  There was no bird action although a few birds have begun to show up.