WHO I FISHED WITH:  Yes, that title is no joke!  My 3-man crew this morning landed fish, literally, at a rate of more than one fish per minute for 4.5 hours straight on Lake Belton.

With a cold front due in around 11pm this evening, we had pre-frontal activity which is always among the best weather scenarios one can encounter if timed correctly.

Adding to this was the fact that all three anglers have fished with me before, and, more importantly, have used the tactics we used today (vertical jigging with slabs) previously, so there was no learning curve to get through.  Finally, the boys were very competitive with one another which kept them engaged and their concentration levels high. Finally, my crew set a high goal for themselves.  On a previous outing on Stillhouse (15 March 2015) which included just Steve and Caleb and also occurred in pre-frontal conditions, the two landed 256 fish in just under 4 hours.  My crew wanted to beat that tally today — and they did!!

Steve very much appreciates the consistency and productivity of fall fishing, and routinely books several trips in November as far in advance as July or August to make sure he and the kids get to cash in on this high-numbers bonanza. 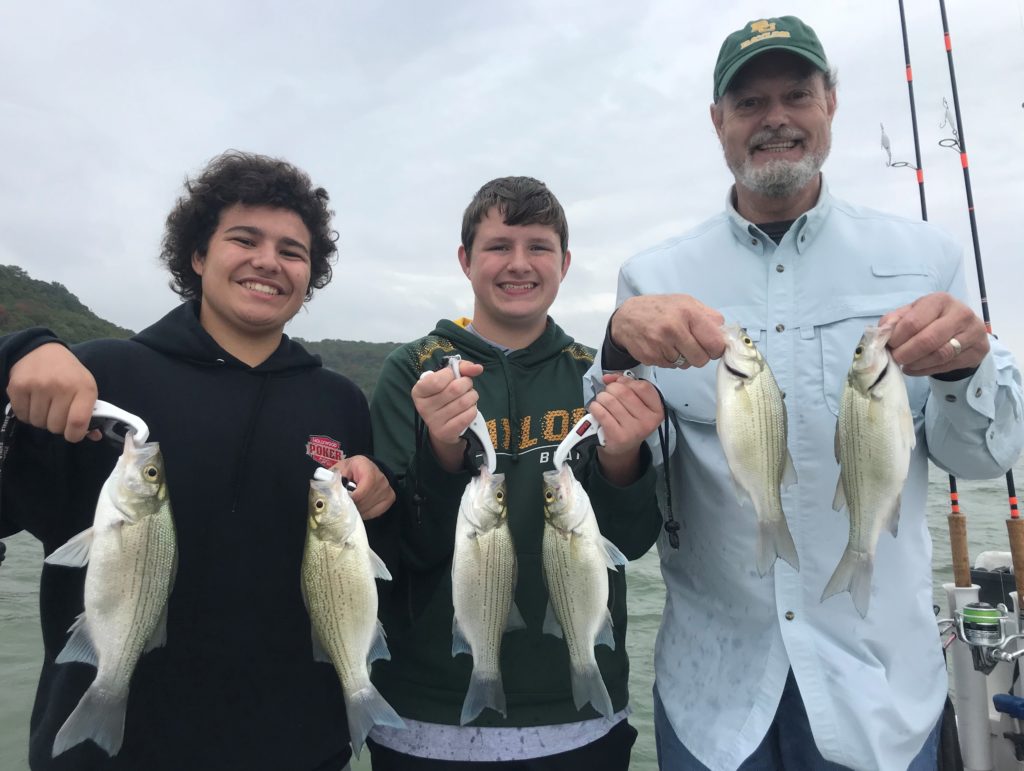 HOW WE FISHED:  Despite the fish being in overdrive this morning, there was no helpful bird action to key off of.  I suspect this might be because the water was already whitecapping before the (cloud-obscured) sunrise, thus making it difficult for these birds to spot subsurface activity.

So, we relied upon good old sonar to get the job done.  We fished only 3 areas this morning and used a fast easing tactic to provoke the fish we’d found into striking.  These areas were all gently sloping, all in 31-35 feet of water, and were all relatively clean bottoms with ample baitfish in the vicinity.

Our bait of choice was the smallish 3/8 oz. white Hazy Eye Slab with stinger hook attached.  The stinger accounted for easily 45% of our catch this morning.  We had very few other bycatch species today — only drum.  No largemouth, no hybrid, no crappie, no bluecat, which was also surprising given how ramped up the white bass were.

I often fish alongside my clients as it helps create and maintain the commotion which keeps fish interested and holding beneath the boat as fish are caught and then regurgitate and defecate, thus creating a natural chum-line of sorts.  Today, there were many instances where I just put my rod up in the holder and unhooked and released fish because the catch rate was that high.  The thumper also did its part to draw and hold fish beneath the boat.

With the water temperature fairly stable at around 60F and only a mild, short front due in overnight, plus being in the dark of the lunar cycle, I anticipate the fishing will stay strong for as long as our current weather forecast looks ahead (about 5-6 days).

OBSERVATIONS:  No helpful bird action possible due to strong winds.  Had credible report of evening bird action which occurred under “calm before the storm” conditions prior to cloud-obscured sunset.

Wx SNAPSHOT:   NOTE THE WINDSHIFT DUE AT ~9PM AND THE WESTERLY COMPONENT TO THE WIND THE ENTIRE DAY PRIOR TO THE FRONT’S ARRIVAL 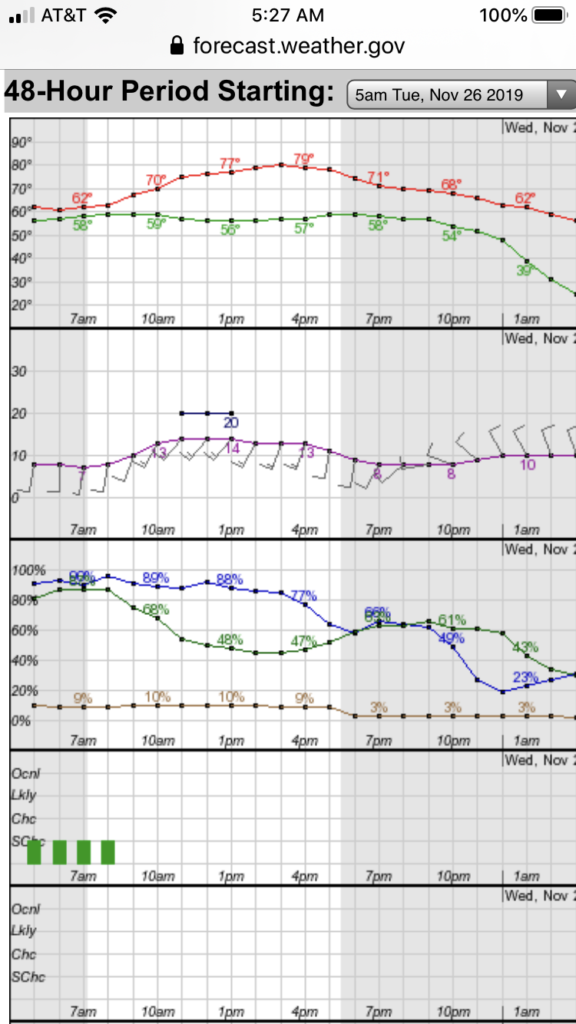