WHO I FISHED WITH: This morning, Thursday, 19 Dec., I fished with Mr. John Leverington and his son, Shawn Leverington.  John recently returned to the United States from Turkey, where he serves as a counselor to aid workers ministering in southwest Asia.

Shawn is a U.S. Army Reservist working full-time at Fort Hood as commander of the Warrior Transition Unit there.  The WTU’s stated mission is to provide command and control, primary care and case management for soldiers in transition to establish conditions for healing and to promote the timely return to the force or transition to continue serving the nation as a veteran in their community.

Before heading away from Central Texas to visit family in the Chicago area, this father-and-son pair spent some time together with me on Lake Belton in pursuit of white bass. 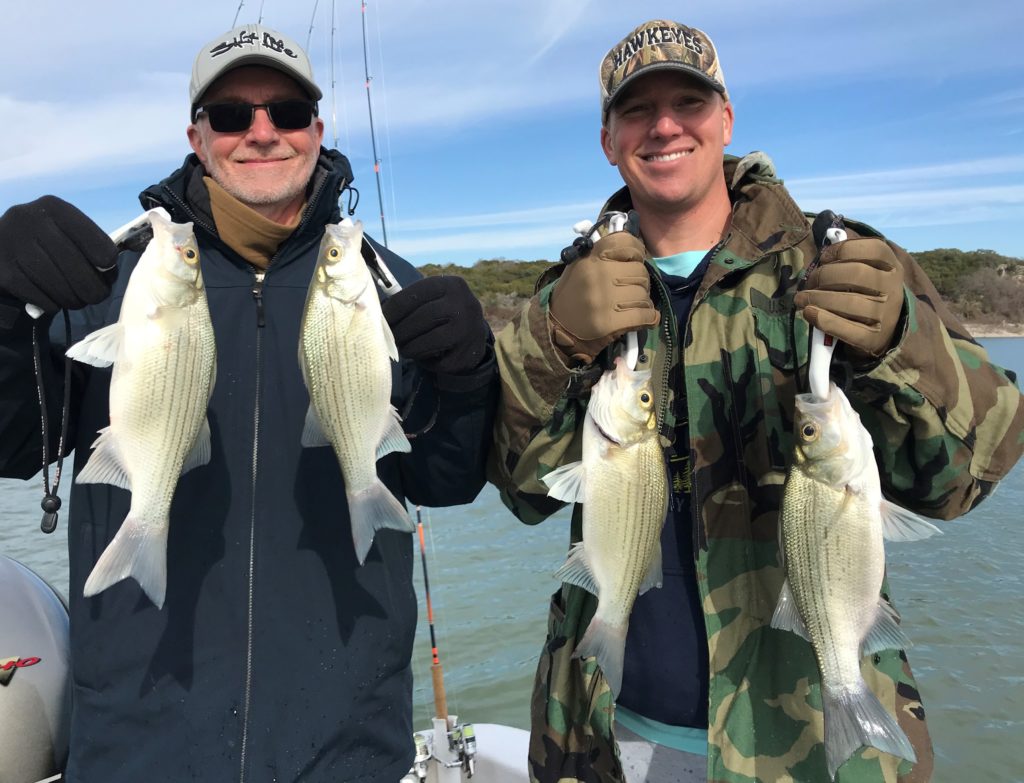 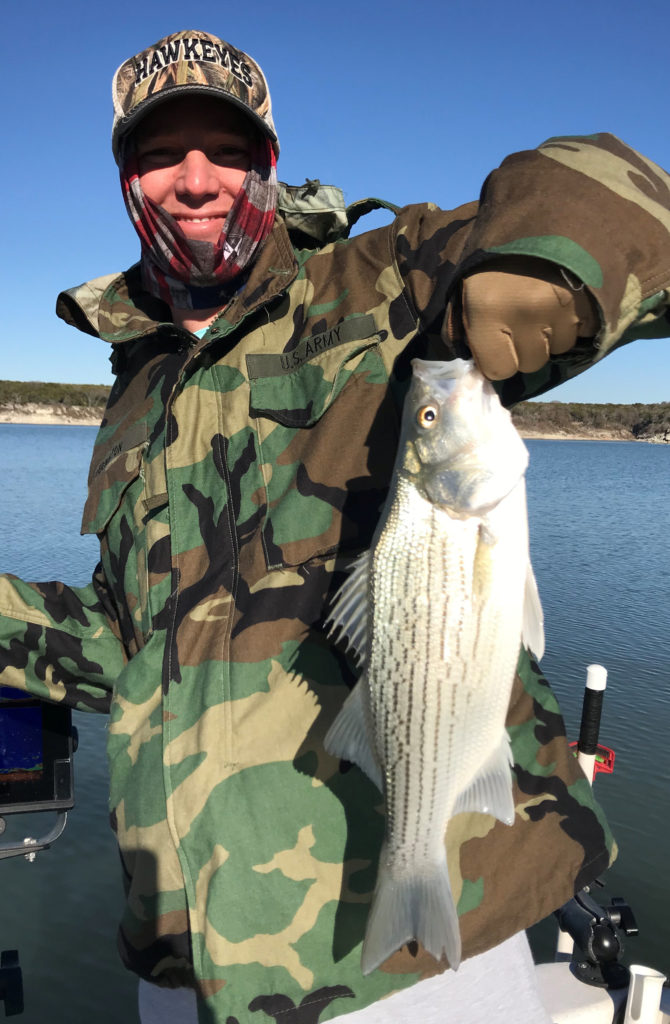 PHOTO CAPTION:   This was the sole hybrid striped  bass we encountered this morning while working artificials for white bass on Lake Belton. 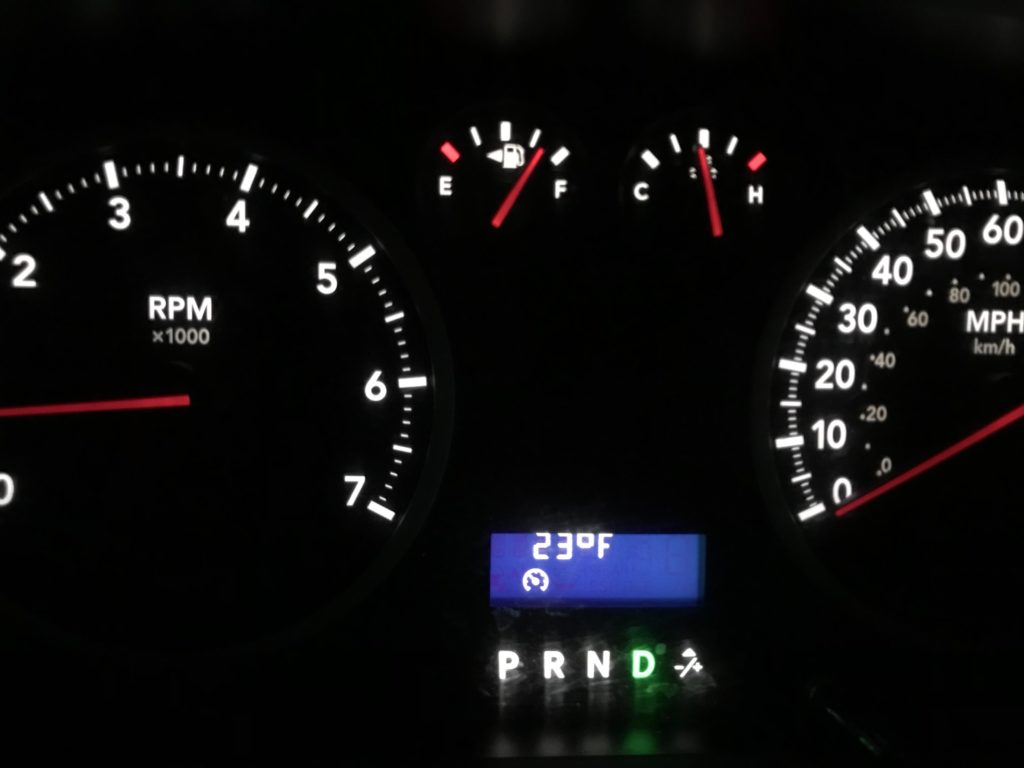 PHOTO CAPTION:   Yep, that’s 23 degrees Fahrenheit showing just before dawn this morning at lake level as I was backing down the boat ramp.  I’m thankful to whoever invented the balaclava!!

HOW WE FISHED: As the winds went, so went this fishing this morning.  We started out with near-calm conditions and fish that were quite lethargic.  As the wind’s velocity increased, so did the fishes’ activity level.  By the time our first hour on the water had gone by, our fish count was still in single digits.  As the wind peaked around 10 mph toward trip’s end, we put a final 22 fish in the boat in under 20 minutes just before the fish turned off from their morning feed.

Early on, while the fishing was slow, we relied on the thumper to pull in suspended white bass which we “sniped” using slowly presented lure in conjunction with Garmin LiveScope.  As the winds increased and as a bit of high, thin, white cloud cover began to build, the fishing off bottom turned on well and a more traditional “easing” tactic and even a slow version of smoking came in handy.

On significant, positive change today was that perhaps 30% of our catch was made up of 2 and 3 year class fish which is an improvement over the 1:6 or greater legal to short ratio that Belton has been offering up since the fall cool-down began in October.

We landed at least a dozen largemouth mixed in with our white bass, as well as a handful of drum, and 1 hybrid striped bass, which just barely 18 inches.

OBSERVATIONS:  No bird activity this morning.  30% of our catch was made up of 2 and 3 year class fish.

Wind Speed & Direction: Light WSW through 9A, then increasing and shifting to SSW8-11 thereafter 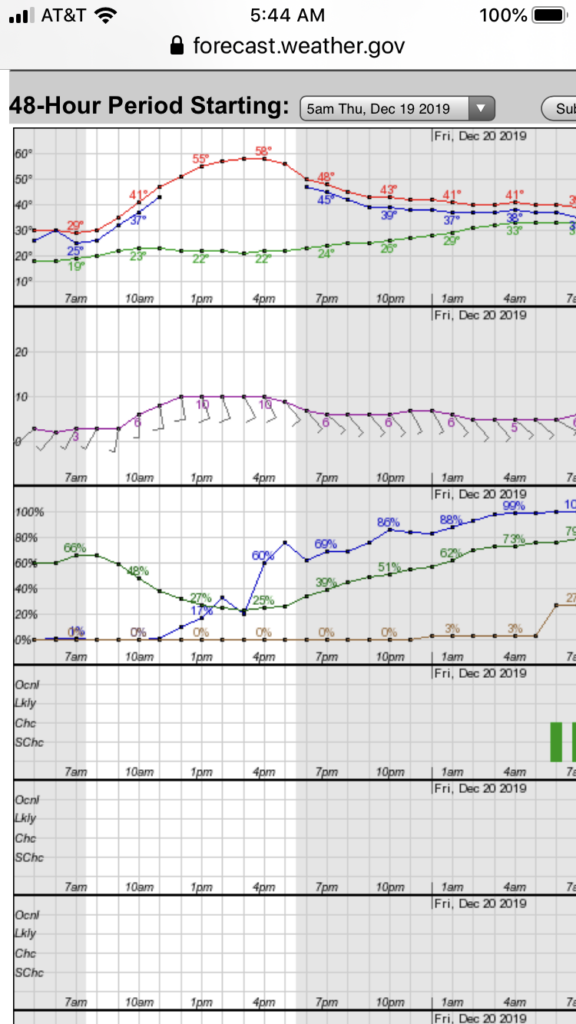