WHO I FISHED WITH: This morning, December 26th, 2019, I fished with Troy Hensley Jr. of Killeen and Frank Cattani.  Troy is a U.S. Army veteran turned stay-at-home dad of 3 (and soon to be 4!!) and Central Texas College student, and Frank and a partner operate a heavy equipment business focused on excavation up in Illinois.  Back in the 70’s, Frank did a stint in the U.S. Army Reserves, as well.

Frank and Troy’s mom drove down for a visit from their home in Illinois.  Frank did well adapting to the tactics necessary to put fish in the boat this time of year.  Although he has his own small lake to fish up in Illinois, the primary species in it are cover-loving fish like sunfish and bass, so fishing for open-water pelagics species without bait was a bit new to him.  Frank caught the first hybrid striped bass of his life on this morning’s trip. 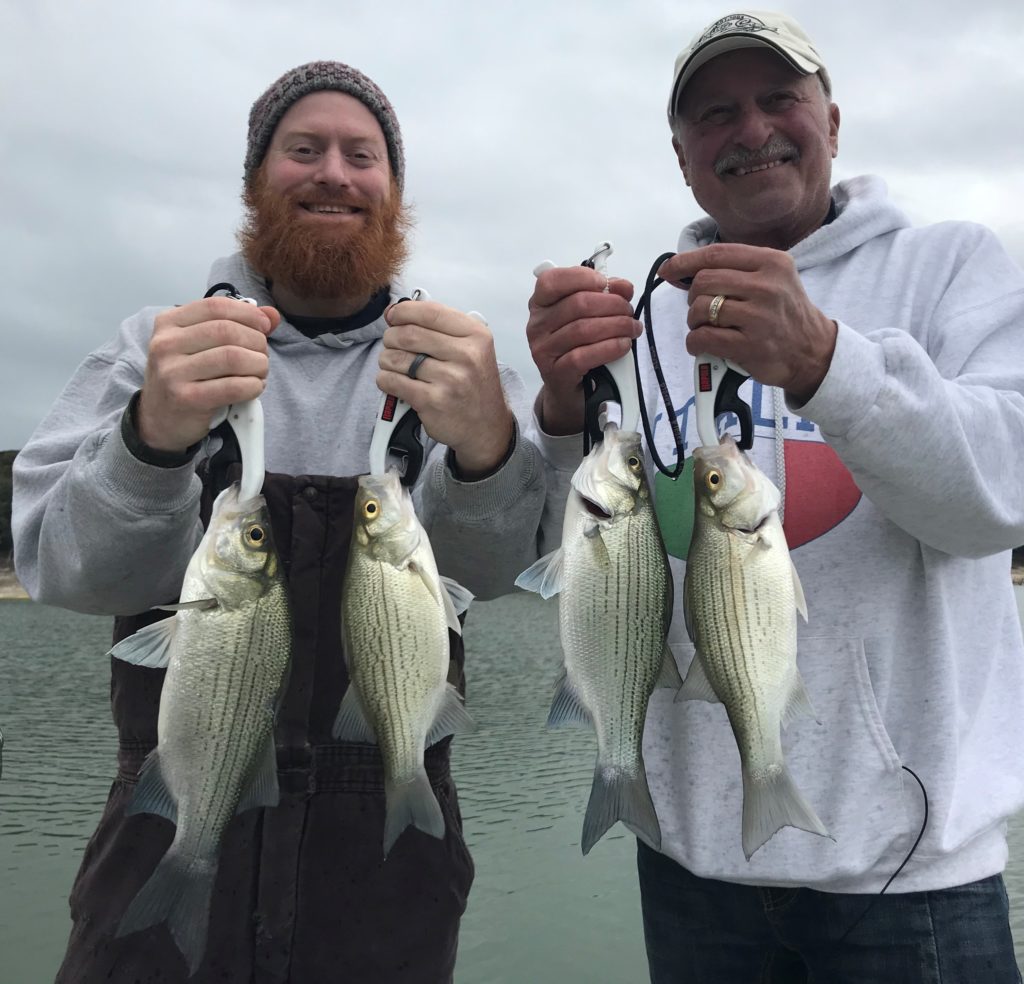 HOW WE FISHED:  For the fifth consecutive trip we had calm, foggy conditions with bright light conditions within the fog thanks to the fog being localized and just hovering over the lake’s surface, thus allowing the sun to illuminate it from above.

A trend has emerged during these calm, foggy mornings.  It seems the fish are biting well under the cover of fog, then slack off after the fog clears as the calm conditions remain and as the skies become clear and bright.  A late morning increase in action then takes place as either light cloud cover and/or a light breeze develops.

I’ve also found fish, albeit most of them smallish, up very shallow.   I suspect this is because the water temperature has actually risen slightly over the past week thanks to balmy conditions for late December.  We caught fish as shallow as 8′ deep this morning, and had multiple schools of fish under the boat in 13-18 feet of water.  These fish typically either spooked or moved on quickly on their own, as we rarely caught more than a handful of fish from these shallow congregations before sonar went blank.

The deeper the fish were this morning, the longer they stayed put and kept biting.  All of our fish came on the good old 3/8 oz. Hazy Eye Shad in white color with stinger hook attached.  A consistent, slow easing tactic caught fish very efficiently.

OBSERVATIONS:  No bird activity this morning.  I found fish as shallow as 8′ deep in the 55.3F water.

Sky Conditions: Sun obscured all morning by fog through around 9:30A, then slowly clearing to mostly cloudy with white cloud cover, followed by heavier coverage of grey clouds