WHO I FISHED WITH: This afternoon, 04 January 2020, I fished with Ben Adams and his girlfriend, Mattie Hawkins, on Lake Belton.

Ben, originally from Spring Branch, TX, is working his way through an MBA program with Texas A&M, focused on oil industry logistics, and Mattie, an A&M grad. from Friendswood, TX, is working as a veterinarian technician at Gulf Coast Veterinarian Specialists, where the TV show ‘Animal ER’ is filmed.

The two came to visit Central Texas so Ben could meet Mattie’s extended family — her grandfather, aunt, uncle, sister, brother-in-law, and niece and nephews.  Ben’s previous experiences angling have all been via wading in shallow saltwater for speckled trout and redfish, and he was looking forward to the change of locale and tactics that came with this afternoon’s trip targeting white bass and hybrid striped bass. 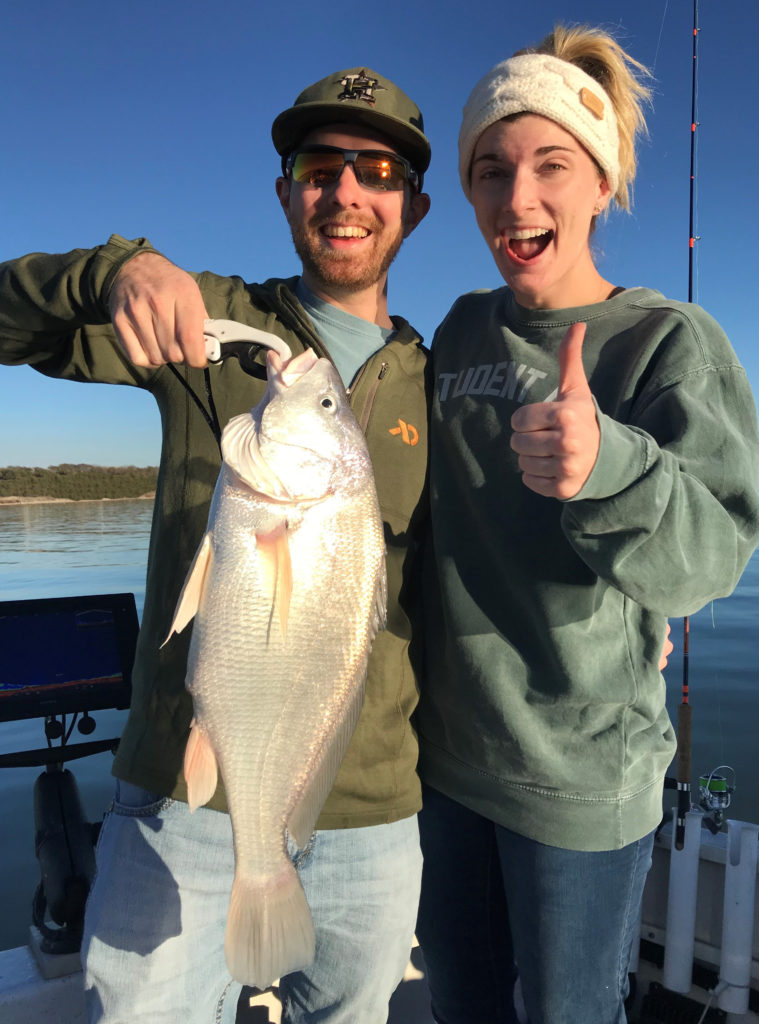 PHOTO CAPTION: Ben Adams, with most of his prior fishing experiences taking place in salt water, immediately noted the similarities between this 6 pound freshwater drum and its saltwater cousin, the redfish.  Freshwater drum are also related to black drum and the Atlantic croaker, all of which are in the Sciaenidae family of fishes. 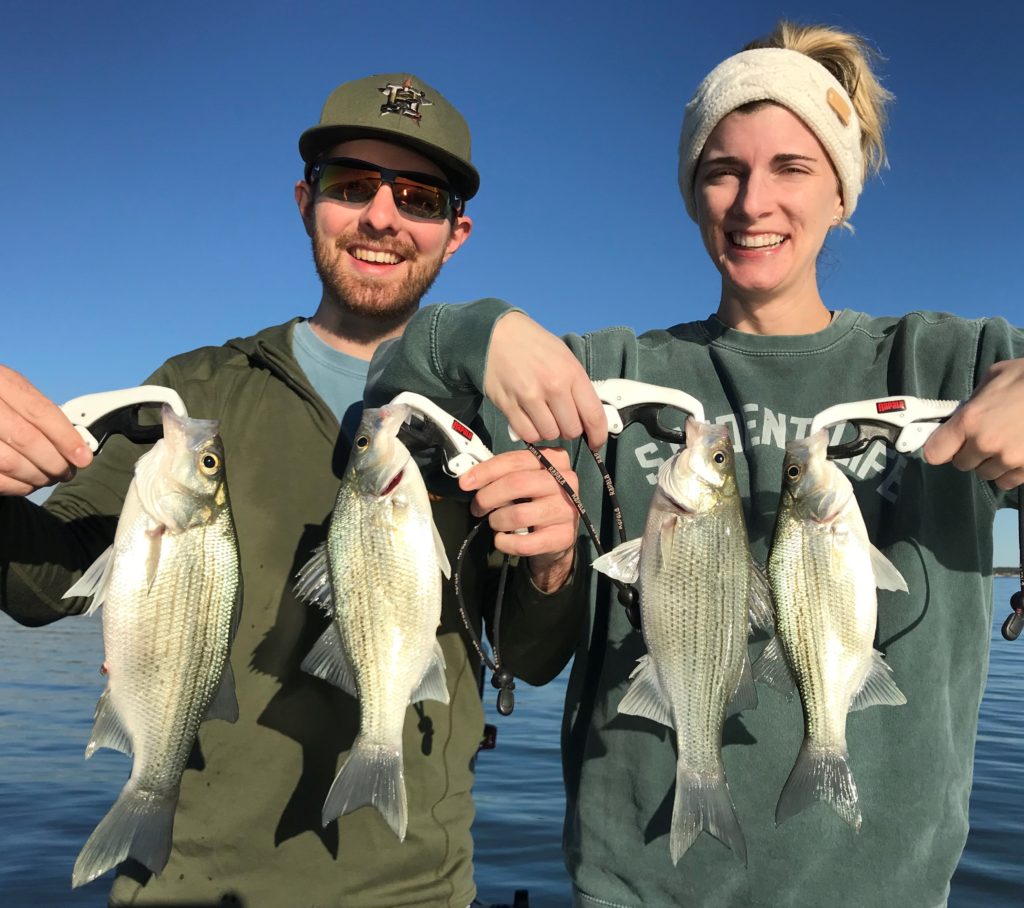 PHOTO CAPTION: As long as the wind rippled the water, the white bass bit.  Ben and Mattie landed 73 fish this afternoon on Lake Belton.

HOW WE FISHED:  After this morning’s prolonged feed, I came off the water between trips, grabbed some lunch and just hoped that the wind velocity, which was forecast to be NW6-9 all day, would behave as forecast.  Without that wind, we’d be looking at a bright, calm, post-frontal condition which is amongst the toughest there is.

As it turned out, the wind did hold up through 5P.  When it died, the fishing died with it, but, before that happened, we managed a nice mixed bag of 73 fish including white bass, largemouth bass, hybrid striped bass, and freshwater drum.

During our 4 hours on the water there were two brief episodes of light bird activity over open water.  We got to both quickly and fished them both thoroughly, but found the birds were behaving more aggressively than the fish beneath them.  Nonetheless, we did add a few fish to our tally during both of these events, but, the lion’s share of our success came as we found deep, well-consolidated groups of white bass holding on breaklines in 35-42 feet of water.

We found three such groups and vertically jigged for these fish using an easing tactic.  We made use of my thumping device to increase fish interest, we made use of Garmin LiveScope technology to know how and when fish were responding to our presentations as well as to “pick off” high-riding fish suspended up in the water column.  And, we made use of the “old faithful” 3/8 oz. white Hazy Eye Slab with stinger hook attached to seal the deal over and over again.

As the wind died around 5p, the fish activity quickly tapered to nil.  We caught and released a total of 73 this afternoon.

Wind Speed & Direction:  NW6-7 at trip’s start, tapering to calm by around 5P 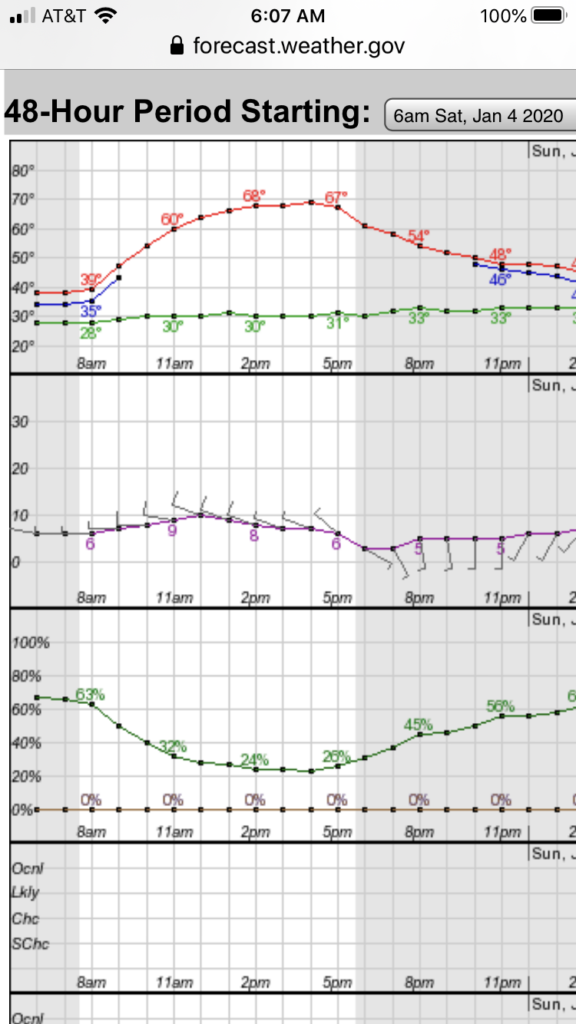