WHO I FISHED WITH:  This past Thursday morning, May 7th, I fished with husband and wife team Jim and Linda Schultz of Salado.  Both are U.S. Army veterans who chose this area to retire to.  In their retirement, they purchased a pontoon boat and are slowly equipping it for fishing with sonar and a GPS-style trolling motor.

The pair has had some limited success catching Belton blue catfish, primarily on free-floating juglines, but success on rod and reel has been harder to come by.

In addition to catching fish, Jim was particularly interested in seeing and understanding how and why I used my own sonar/trolling motor combination in the various fishing scenarios we would encounter on the water today. 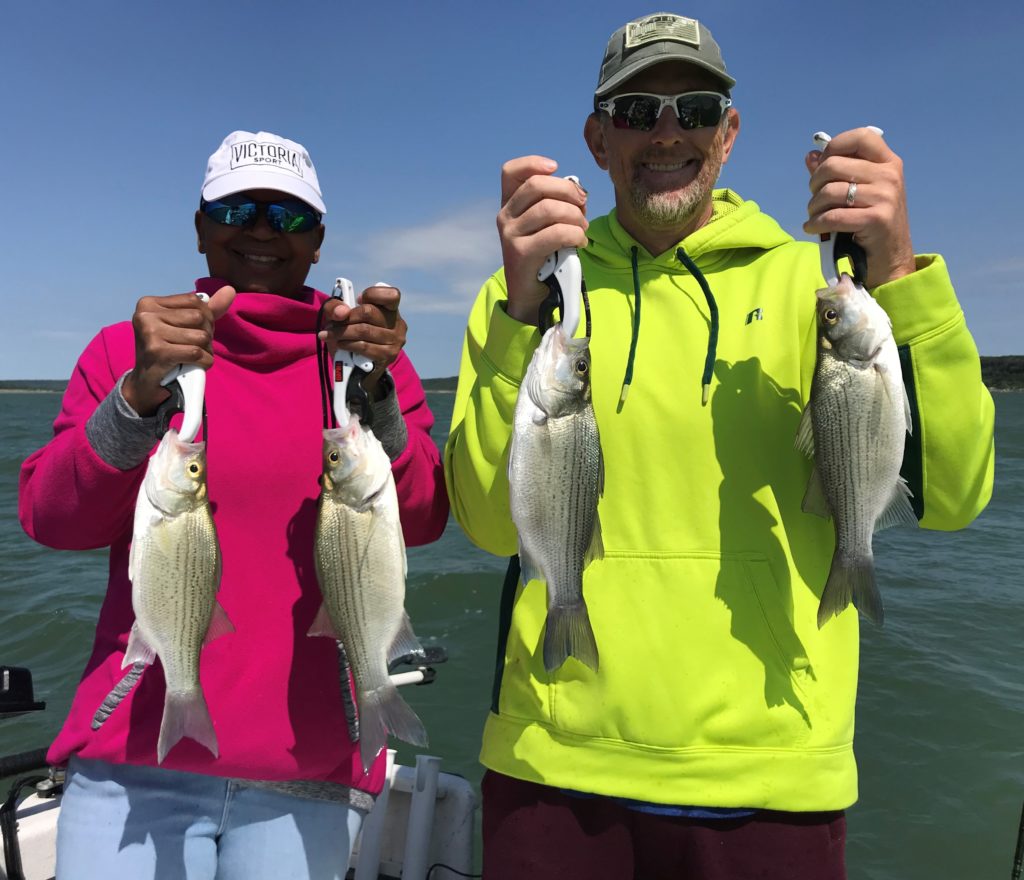 PHOTO CAPTION: As our fish count crept into the 20’s very early on in the trip, Linda said that was the most she’d ever caught at one time.  She and Jim would go on to boat exactly 133 fish on this trip.  Gotta love personal bests! 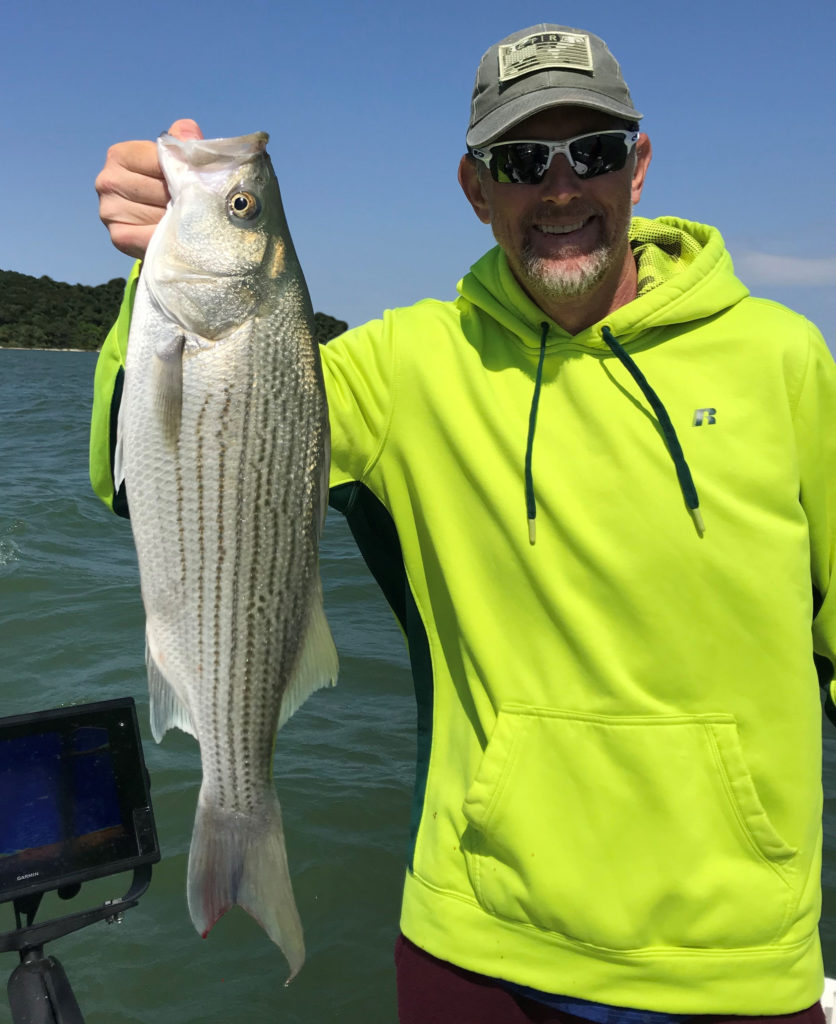 PHOTO CAPTION:  Hybrid stripers have eluded Jim Schultz since he purchased his new pontoon boat, but, the chase ended today when this nice Lake Belton hybrid striper weighing right at 6.00 pounds took his 3/4 oz. Hazy Eye Slab as Jim fished it in and around an aggressive school of white bass.

HOW WE FISHED:  As I arrived about 30 minutes in advance of Jim and Linda, I noted abundant shad spawning activity in the area.  Additionally, because of the calm conditions, it was clear that abundant gamefish (primarily white bass) were holding just offshore taking advantage of the easy meal these shad offered.  After welcoming everyone aboard, going over the safety brief, setting up reel handles appropriately for everyone, and a prayer, we stayed right in the immediate vicinity and put just over 30 fish in the boat using a smoking tactic, all of which were white bass.

Since the white bass fishing requires a bit more reliance on the sonar and trolling motor combination, and because Jim pointed out that Linda enjoys vertical jigging, we intended this trip to be a multi-species trip focused on white bass, despite the fact that the hybrid bite is going strong.  Additionally, of the two forms of fishing (white bass vs. hybrid), the white bass fishing would be more easily duplicated given the Schultz’s current equipment setup.

At one point in the trip, as our fish count rose into the 80’s and Jim began processing why we were doing what we were doing, he saw how the components on his own boat could be better used to help him have success.  He said to Linda, “I’m feelin’ dangerous.”   Linda and I looked at each other and just smiled.

We looked for fish in six distinct areas, finding abundant white bass in three of them.  Our final location produced best, and also coincided with the time at which we experienced the highest wind velocity.  Our first area gave up 32 fish, our second area gave up 22 fish, and the last area we fished gave up 79 fish, all for a grand total of 133 fish which included 1 hybrid striped bass, 2 freshwater drum, and 130 white bass in the 1 and 2 year class.

Every fish we took was taken on either a 3/8 oz. or 3/4 oz. white Hazy Eye Slab with stinger hook.  I make and sell these myself here:  SLABS

We used a “smoking tactic” for both bottom-oriented and suspended fish. 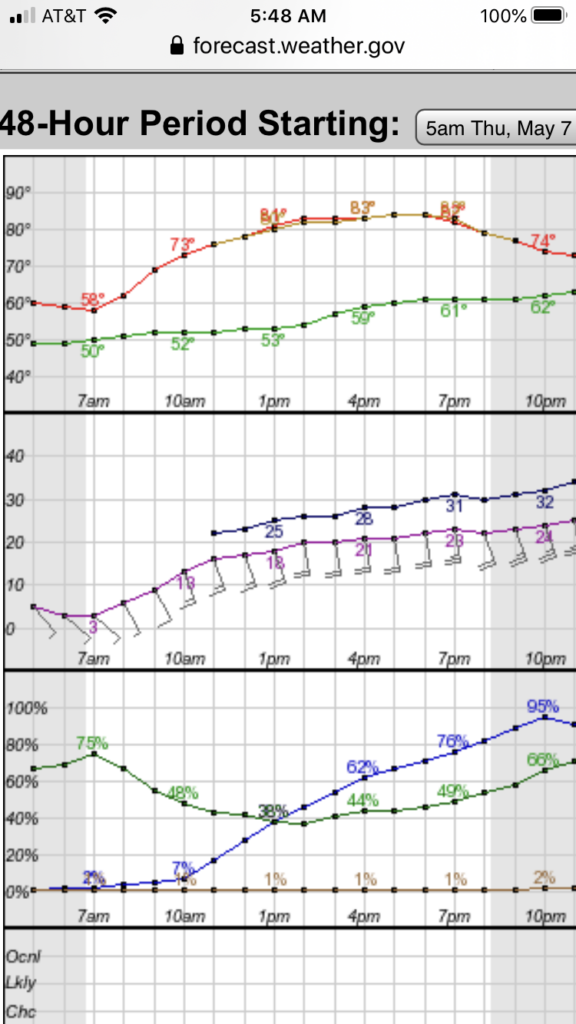