WHO I FISHED WITH:  This past Tuesday morning I fished with a crew of five from the Georgetown area.  Joining me was Dwight Stone, Oscar Leal, Terek Brown, Donnie Boyd, and Jay Stein.

The only one of the five who had not yet been out with me was Donnie, who works in ministry to the poor and who brings his interest in photography into ministry, as well.

The whole bunch are godly, easy-going, self-deprecating, fun fellows to have on board.  I always look forward to fishing with whomever Dwight rounds up!

Dwight first started fishing with me last fall after retiring from running a string of Sonic restaurants.  As we were talking about current events, Dwight expressed concerns about a forthcoming meat shortage, the first indicators of which he’s already seen in the supply chain of the restaurant industry.  it seems nothing has gone untouched by COVID-19, from fishing to filet mignon. 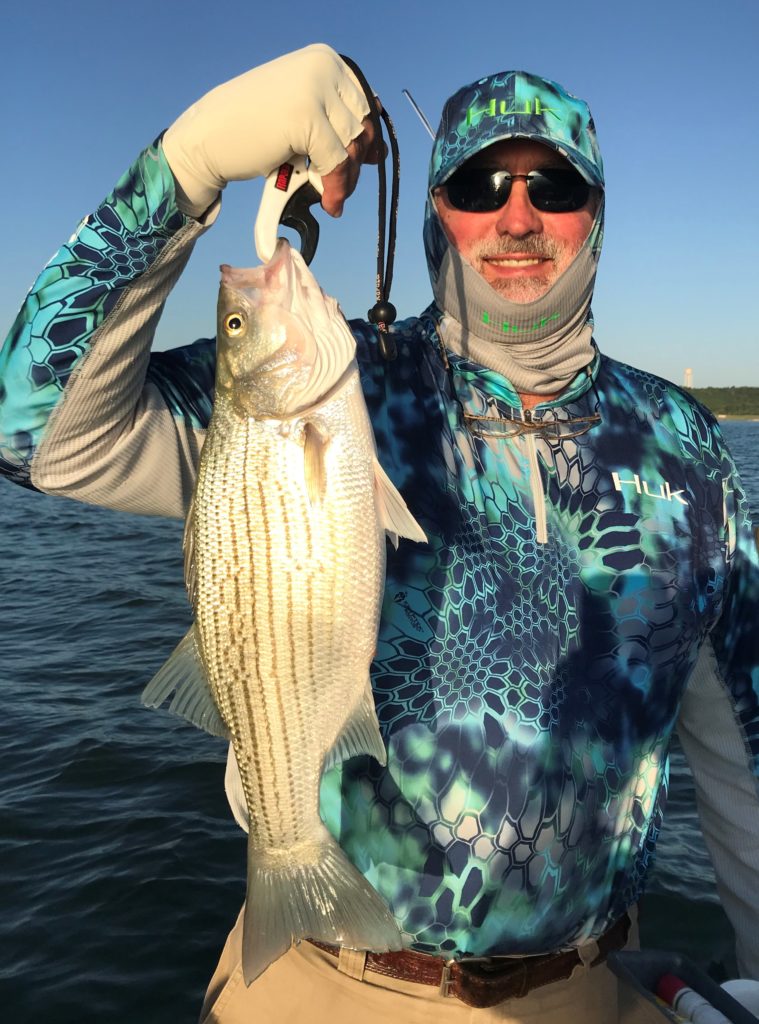 PHOTO CAPTION:  Dwight Stone put this trip together for his buddies. 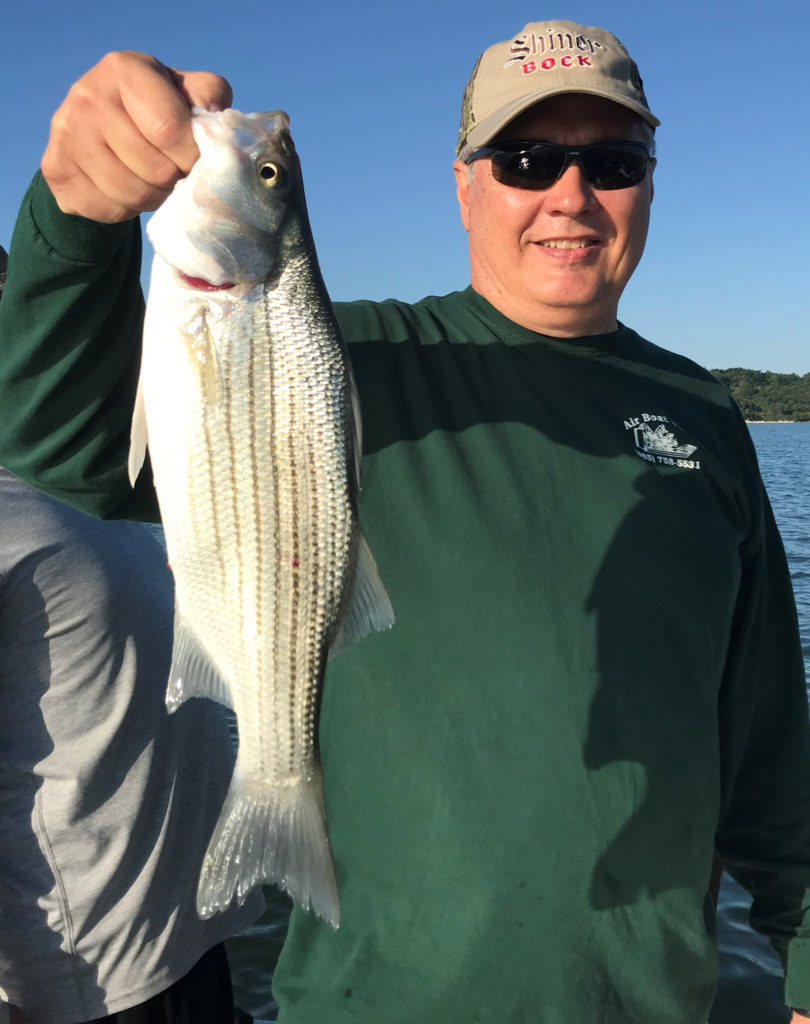 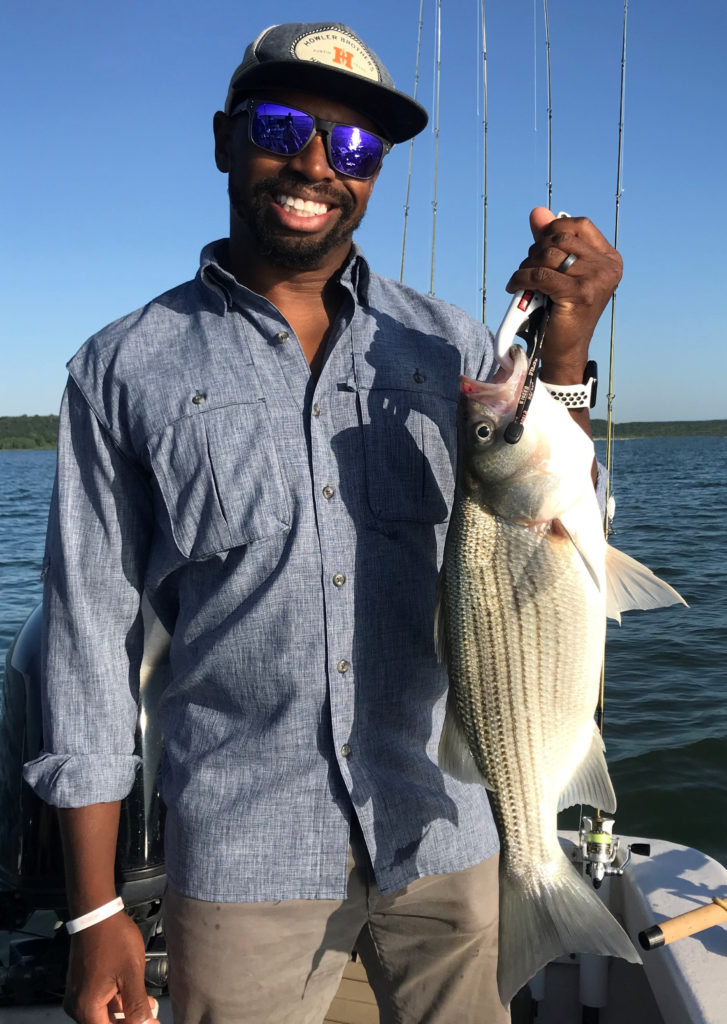 PHOTO CAPTION: I netted about 300 baits with my trusty 5/16″ mesh Fitec net this morning in anticipation of ample bait consumption!  Terek Brown put his fair share of those baits to good use. 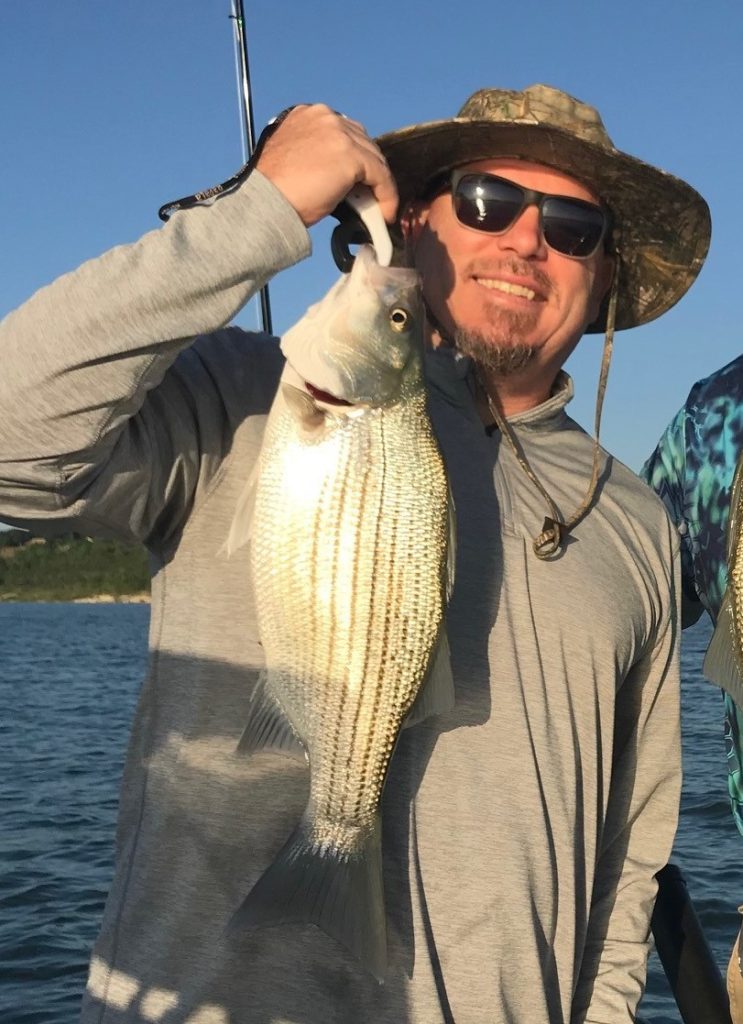 PHOTO CAPTION: Donnie Boyd with his first hybrid striped bass.  He said after landing it, “Man your forearms could only go for 4 or 5 of those before you’re done!”.

HOW WE FISHED:   This morning’s trip divided neatly into two halves.  The first half was spent fishing live shad for hybrid striped bass.  That went swimmingly up until around 8:15 when sonar returns became few and far between and the steady bite we’d enjoyed slowed to a crawl.  During that 2.5 hour span we managed 12 legal hybrid, 4 shorts, and a few white bass.

The second half of our trip was driven by what we found via sonar.  The group concurred that if we found hybrid, we’d fish for them, but if we found white bass, we’d fish for them, instead.  The very first thing I came across was a well-congregated school of white bass in just over 40 feet of water, covering a roughly 25 yard patch of bottom.  We broke out the slabs and started catching very aggressive white bass.  The action lasted for perhaps 20 minutes, then cooled, although the fish were still present, just not chasing any longer.  We dropped bait to them and fished them until they quit, right around 11 AM.

One of the highlights of the trip was seeing blue herons feed on whole white bass which occasionally get throat-hooked when using shad.  These large birds spear these fish through with their beaks as they land in open water, rebalance themselves as they prepare to take off, and then lift out of the water with fish easily weighing 3/4 of a pound.  Neat stuff!  And, it is nice knowing the fish did not go to waste. 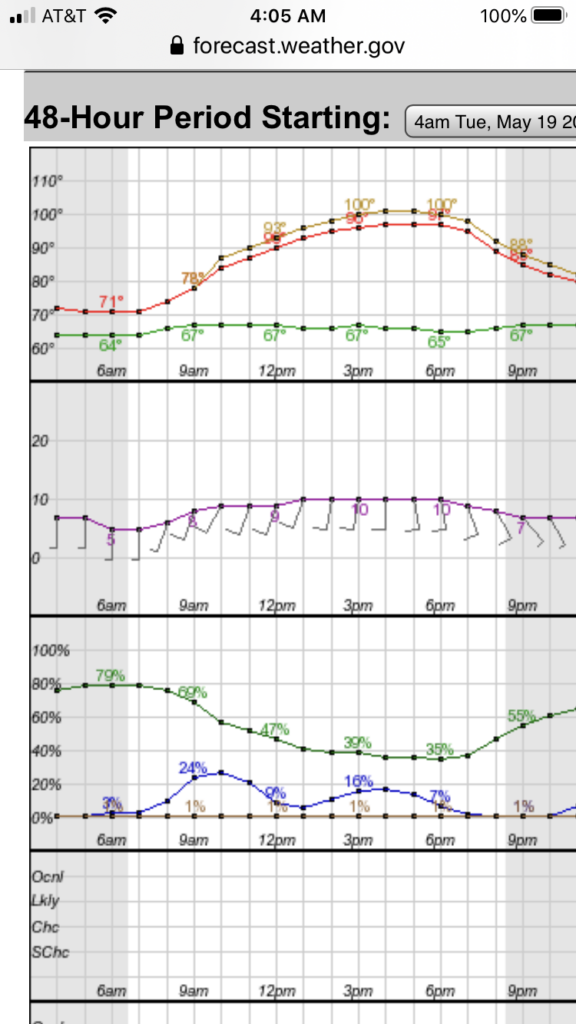 WHO I FISHED WITH:  This past Monday evening I fished with Mike Richardson of Thorndale, TX, and a long-time friend of his, Dale Huggins, from near Corsicana, TX.  Mike is a former law enforcement officer now in the construction trade, and Dale is in the pawn shop business.

Mike is friends with Cliff Brown over at Texas Boat World in Killeen.  After Cliff saw me making use of my sonar units during a recent trip with his grandkids, he suggested Mike come out with me to observe what he had observed, and catch a few fish, to boot.

So, I conducted a multi-species trip for Mike and Dale, with a running narrative on what I was doing and why I was doing it concerning sonar use, and responded to Mike’s questions as we used the sonar in real-life fishing-finding scenarios.

Mike shared something which is true of many anglers — all of his fishing time is spent fishing, and in Mike’s case, tournament fishing for largemouth bass.  He admitted never really taking the time to learn and observe his sonar due to his focus on fishing, knowing in the back of his mind that if he invested some time in the sonar, his time spent fishing would be more productive. 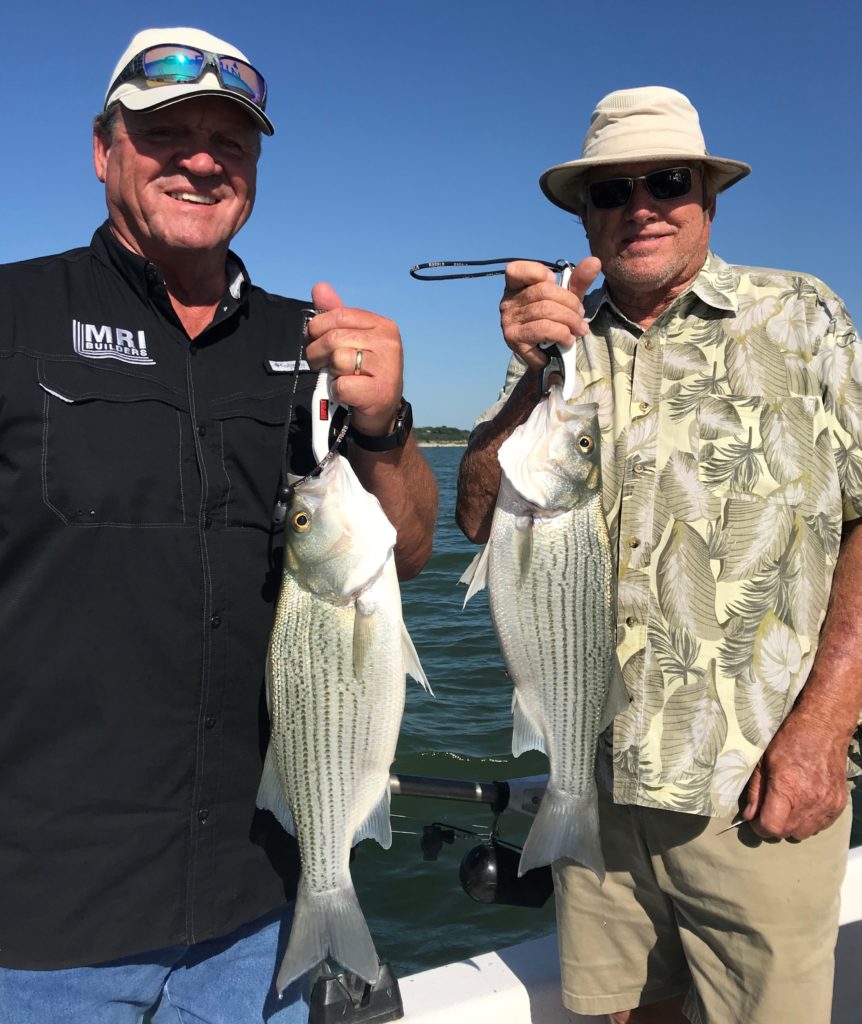 PHOTO CAPTION:  From right, Dale Huggins and Mike Richardson, each with a late afternoon hybrid taken on live shad.

HOW WE FISHED:  We employed a number of tactics this evening and were able to put fish in the boat from start to finish doing so.  We started our efforts in deep water along a significant breakline using downriggers to cover water as I studied sonar with baits in tow.  This yielded several white bass and helped me identify a few hybrid stripers holding near bottom, as well.

We brought the ‘riggers in, Spot-Locked, and commenced to fishing bait (live threadfin shad) where we’d seen hybrid holding.  We picked up several legal fish, as well as a large “pygmy” hybrid, and then moved as soon as the action waned.

Next, we encountered great numbers of white bass holding in “patches” on bottom, again with the aid of sonar.  These fish appeared quite active, so, after Spot-Locking on them, we used Hazy Eye Slabs in 3/4 oz. to tempt them while at the same time using Garmin LiveScope.

Thanks to Zach Brown of Garmin, I was able to upgrade my Garmin LiveScope to include the new bracket which permits the “Perspective” mode, and did the required software update to accommodate that new mode.  Although I haven’t experimented with that horizontal view yet, what I really did like about the upgrade is the decal and accompanying witness marks on the new bracket which leave no doubt as to whether the transducer is in forward mode or downward mode — something that has caused a lot of confusion for the several students I’ve trained on this equipment.

Anyway, we caught white bass at will as long as they hung around, taking our tally into the 60’s.  Since both fellows are experienced anglers, I suggested we set aside our final hour to return to bait fishing in an attempt to boat a few more hybrid.  We wound up with 6 more fish landed in our final hour, including 2 legal hybrid, thus taking our total catch to 73 fish, which included 7 legal hybrid striped bass. 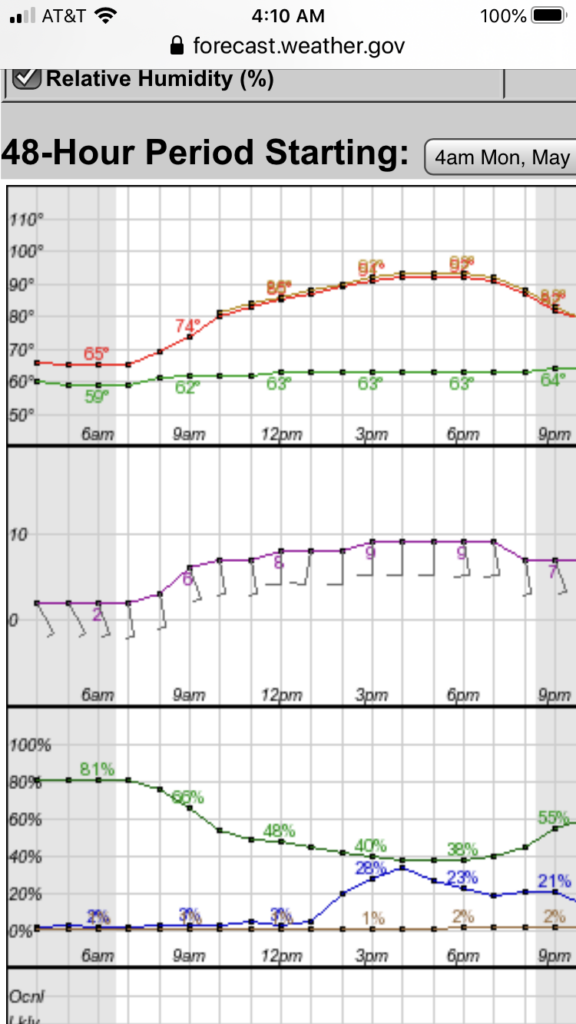