WHO I FISHED WITH:  This past Saturday morning I fished with Sid and Kristien Spindor of Salado.  Sid contacted me earlier this spring looking for some manner of water-related activity to do with his wife after their Caribbean cruise was cancelled due to COVID-19.

After waiting patiently for my next available opening, this morning we made it happen on Lake Belton.

Sid is an engineer working at a plastics business in Georgetown, and Kristien is an operating room nurse at one of our local hospitals.

My wife is also a nurse and, during her college years, I helped her study and practice her skills from time to time.  As the Spindors and I were fishing our final location of the morning, Kristien, who was standing to my right, shrieked.  As I looked over at her, I saw she had one of the tines of the treble hook from the lure she was using stuck in her finger, between the skin and the nail.  I instinctively grabbed the line above the lure to relieve the strain her taut fishing line was placing on it, then quickly removed the point from her finger.  Luckily, the point did not penetrate up to the barb.

After letting things calm down for a few moments, Kristien took me up on my offer of a Band-Aid.  I tried to reassure her by using one of the nursing terms I recalled from helping Rebecca.  I told her I would be sure to maintain the “sterile field” on the Band-Aid.  I think this made her realize I had some medical background, which, in turn made me aware that I was now likely being evaluated as to the quality of my patch job by and OR nurse of all people!!  We got the Band-Aid on securely and Kristien went right back to catching fish in no time. 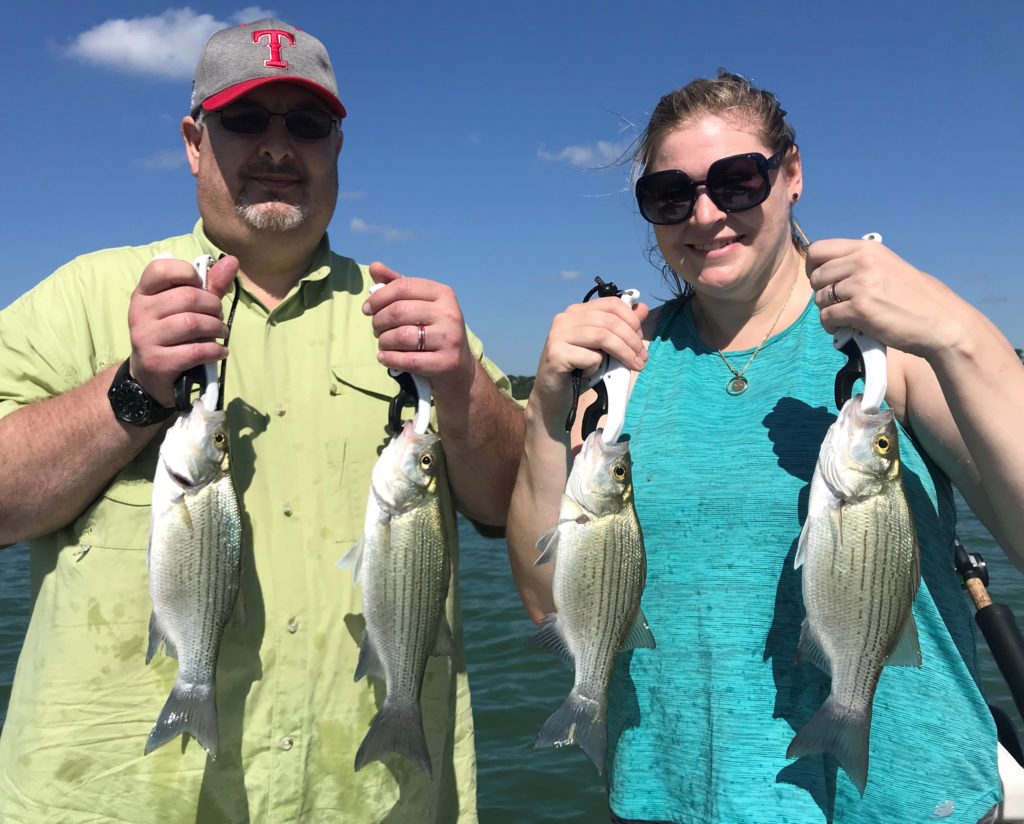 PHOTO CAPTION:  Sid and Kristien Spindor took a guided fishing trip with me today on Lake Belton after COVID-19 scuttled their plans for a Caribbean cruise.

HOW WE FISHED:  Summer patterns are definitely starting to kick in with low light times seeing the majority of the activity.  We landed 47 fish this morning, with 21 of those coming prior to 7:30, then a slower, steady catch of fish thereafter.  Fish are beginning to suspend more, with sparse action on/near bottom.  Fish are also beginning to move routinely, both in terms of locations they are found in as they pursue shad, and in terms of the increased speed at which they are patrolling.

This morning we check two areas for shallow fish which moved up to feed overnight, and found fish at the second of those locations.  We worked these moving, feeding fish over with downriggers, catching singles and doubles as we went.  There was no topwater action to give away fish location, so sonar was key.

After this initial feed wrapped up around 7:30, we experienced a lull, they got back on fish around 8:40.  This time, the fish were deeper, more scattered, and more suspended.  Over the course of the next 75 minutes, we only encountered one scenario where I saw enough bottom-oriented fish to bother jigging for, and that did not produce.  Eventually, these fish dissipated and we made one final move.

Once again, we started off by covering water with hooks in via downrigging, caught fish, and then stopped atop the one school of bottom-oriented white bass we found here.  This produced just 3 fish before that school moved on.  We wrapped up the trip with one final round of downrigging before the wind went out of the fishes’ sail and we called it done right at the 4-hour mark as the sun was getting hot.

OBSERVATIONS:  No topwater action worth noting as of yet. 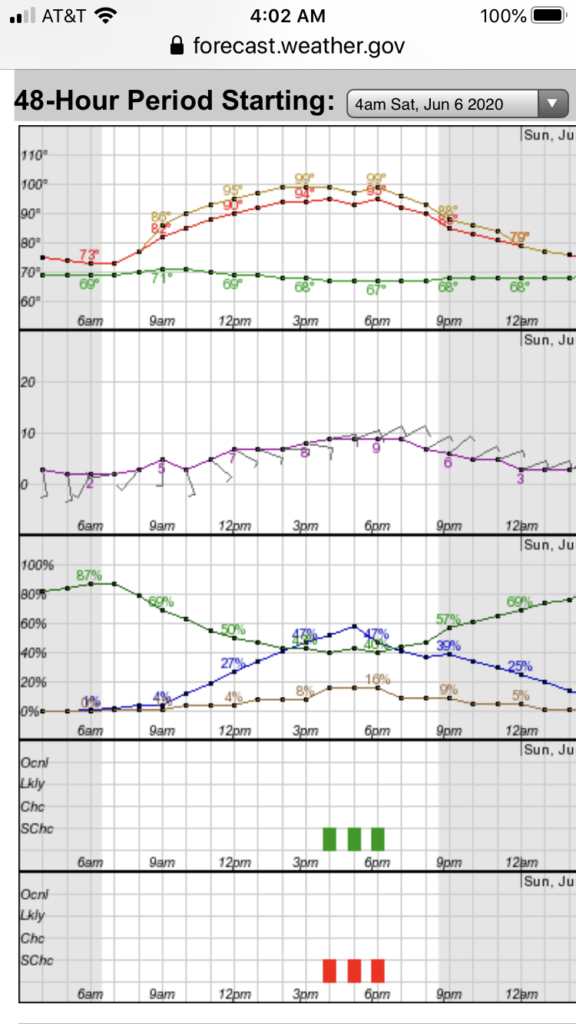 WHO I FISHED WITH:  This past Friday evening I fished a multi-generational trip with the Benedick family.  Jered, who lives in Belton, coordinated the trip, which included his son, Tyler, Jered’s dad, Ron, and Jered’s twin brother, Matt.  Ron and Matt came down for a visit from the Ardmore, OK, area.

All of the men are involved in ministry.  Ron is a retired pastor, Jered is a youth pastor turned youth counselor, and Matt is a hospice chaplain.

After Monday evening’s particularly tough trip on Belton, and after looking at the forecast which called for calm/very light winds and clear skies, I was a bit skittish about this trip, but, thanks to a SE wind velocity higher than forecast in the first 2 hours of this trip, all turned out well. 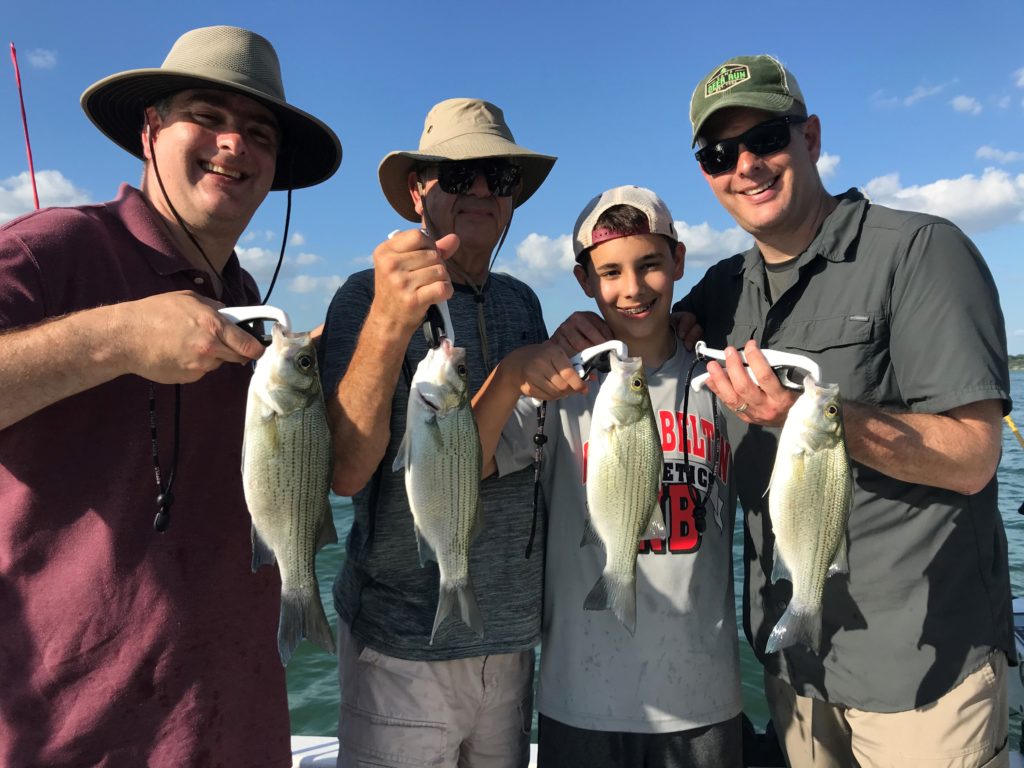 PHOTO CAPTION:  From left, Matt, Ron, Tyler, and Jered Benedict with part of our 70-fish haul on a toasty June evening on Lake Belton.

After meeting everyone and covering the basics on the gear and presentations we would be using, we started off downrigging along a deep breakline.  No sooner did we get both ‘riggers in the water then we had both rods go off as we encountered a sizeable, deep school of white bass holding tight to bottom in a feeding posture.  As soon as we reeled those biters in, I changed us quickly over to spinning rods equipped with Hazy Eye Slabs (white, ¾ oz. with stinger hooks) and we worked these fish over with a smoking tactic.

We caught fish steadily for about a half-hour, including 2 largemouth and 1 freshwater drum in addition to over a score of white bass.  After these fish dissipated, we continued downrigging in this general area and steadily picked up singles and doubles on the 3-armed umbrella rigs we were using, both equipped with Pet Spoons until the fish gradually lost interest, necessitating a move.

The first 90 minutes went better than expected.  We then experienced a bit of a lull, checking several areas without result.  Around 7:10, we began to slowly pick up white bass once again, and the catch rate improved right on through sunset with singles, doubles, and triples coming over the gunwale steadily.

Just following sunset, we found yet another sizeable school of white bass sufficiently close to the bottom to stay put long enough for us to Spot Lock on and fish vertically for.  This feed lasted only 10-12 minutes as the fish continued to move both shoreward and upwards in the water column, but everyone caught several fish during the spree.

We closed the trip out with one last round of downrigging.  Our final tally of 70 fish consisted of 67 white bass, 2 largemouth, and 1 drum.

OBSERVATIONS:  No topwater action worth noting as of yet.

**Area  vic 677- white bass found via downrigging, then worked over with smoking tactic