WHO I FISHED WITH: This past Wednesday morning, 29 July, I fished Lake Belton with two young lady anglers — Lils and Zoey Haberer, accompanied and assisted by their mom, Emily, and their grandfather, Steve Niemeier.

PHOTO CAPTION #1:  That’s Emily and little Zoey with a buffalo nearly as long as Zoey is tall! 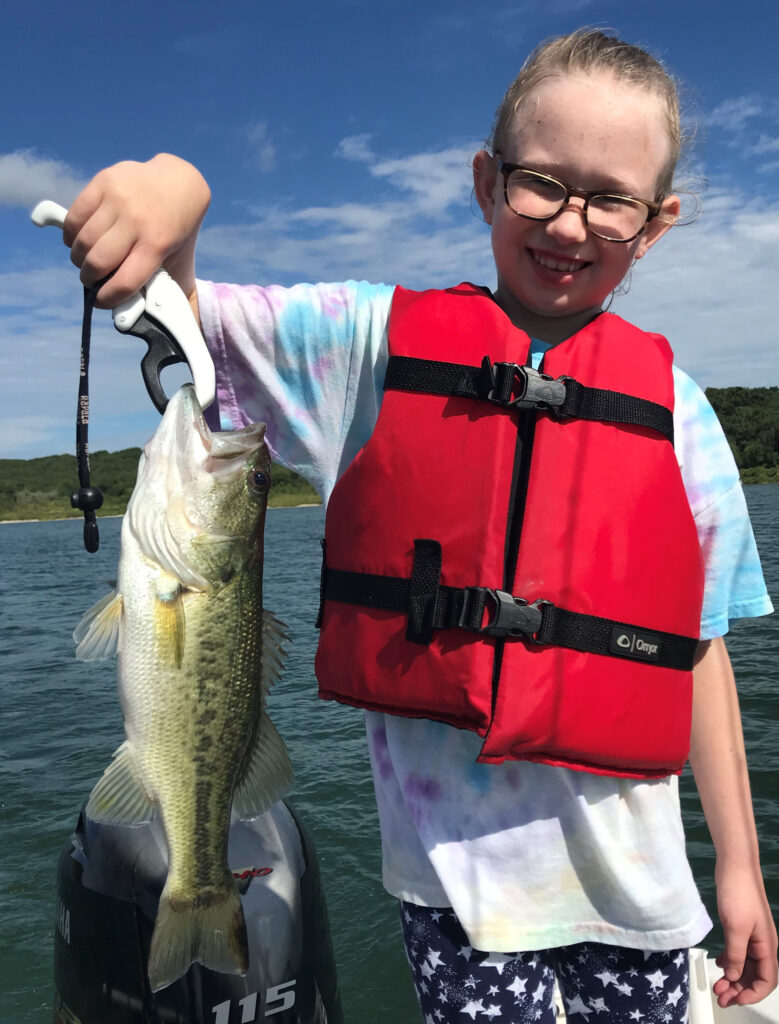 PHOTO CAPTION #2: Lils Haberer with an 11th hour largemouth we picked up downrigging after causing havoc for the local sunfish population for over 2 solid hours.

HOW WE FISHED: With girls so young, I had a fairly limited amount of time to find some “easy” fish before they became disinterested. In a scenario nearly identical to the day before, although our forecast called for SW winds, we actually had ESE winds during that critical low-light time from just before sunrise to just after it during which much shallow water topwater feeding typically takes place. That easterly wind just seems to put the brakes on the topwater bite. We actually spotted fewer suspended fish than the day before, and saw no early topwater fish at all this morning. After patrolling, looking, and downrigging a bit, by the 1-hour mark we’d managed to lose 2 young of the year white bass (which were all of about 4″ long), and land another.

I decided at that point that we needed to provide some “instant gratification”, so, we headed up shallow and proceeded to put a hurt on the local sunfish population.

Over the next 2.25 hours, the girls landed exactly 102 sunfish, including bluegill, green, and longear sunfish. Lils was ably assisted by Steve, and Zoey was coached by her mom. This was just the ticket to refocus the girls after a very slow start.

By the time the second area we fished for sunfish played out, we were right around the 3.5 hour mark and Zoey had just about played out, and I suspected Lils wasn’t too far behind. I suggested that we give downrigging just one more try to see if we couldn’t end the day with some larger fish.

Since the girls could move around and snack while we downrigged, and because this was a change of pace from the sunfishing, that suggestion went over well.

We put in all of about 20 minutes’ worth of downrigging during which time Lils came up with a nice largemouth bass — her largest fish of the trip. Not to be outdone, Zoey (with much help from Emily, or perhaps it was the other way around), landed a 16.00-pound smallmouth buffalo.

The whole boat erupted in cheering when the fish was secured in the net. We revived the fish, took some photos, and released it. It was then that Emily noticed Zoey was pouting up in the front of the boat with her head down.

When asked what was the matter, she shared with her mom that she wanted to take the buffalo home as a pet and was therefore very sad that we had released it.

Besides that, we had a good trip even if the white bass weren’t cooperative.

OBSERVATIONS:  The presence of an easterly wind these past two mornings has just killed the low-light bite. After the sun gets up and the wind starts to move the water, occasional “popcorn” schools of briefly appearing whites could be seen for just seconds at a time out in open water.