WHO I FISHED WITH: This morning, Monday, October 12th, I fished with a great crew of 4 teens from the Leander area, accompanied by Debbie Wright, mom to two of those kids.

Debbie Heard of my guide service through a local Facebook page after a local family their reported about the fun and productive trip they had experienced.

I welcomed aboard Debbie’s son and daughter, Adam and Anya Henson, as well as Adam’s buddy, Trevor Sheehy, and Anya’s friend, Allison Trantham.

None of the kids had prior fishing experience, which is often a plus, as folks with little or no experience tend to listen well and follow the coaching I provide very closely, as all four of the kids did today. 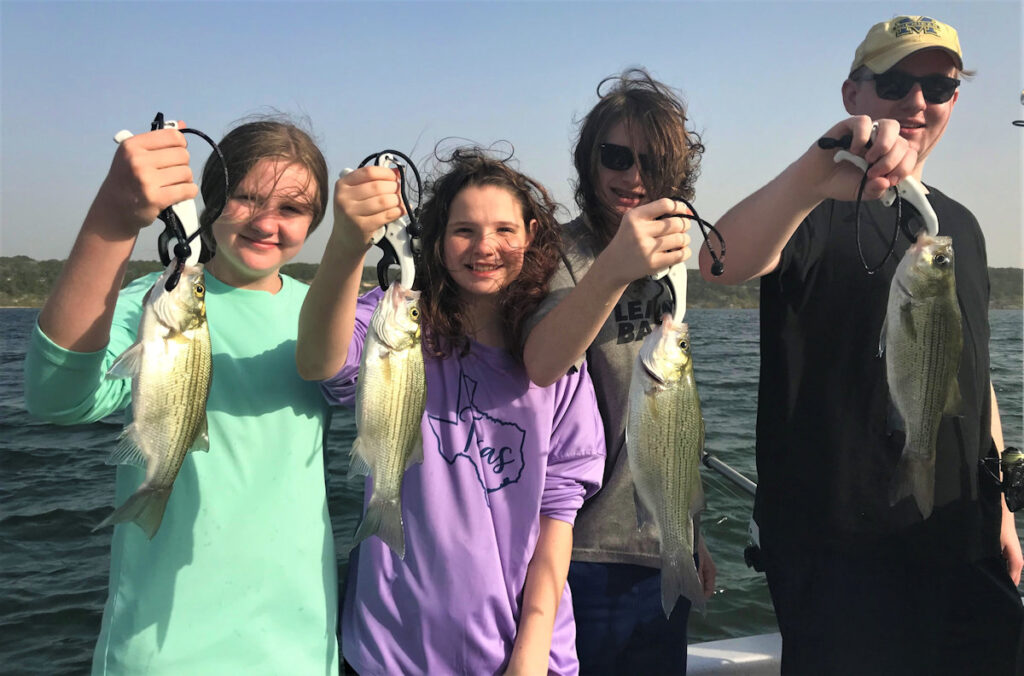 PHOTO CAPTION #1:  From left: Allison Trantham, Anya Henson, Adam Henson, and Trevor Sheehy with a few of the 114 white bass they landed as a dry cool front moved in this Columbus Day 2020. 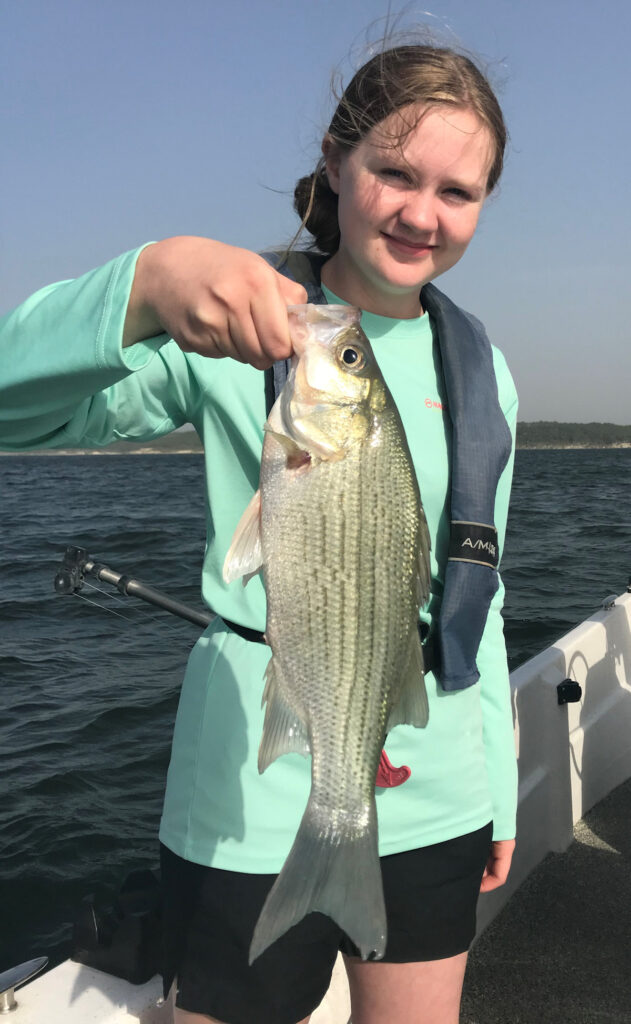 PHOTO CAPTION #2:  Allison Trantham landed our largest white bass of the trip.  This fish went 14 3/8″ and was likely 4-5 years old or more.

We were very fortunate to hit the water right on the lead edge of an incoming, dry, and mild cold front. The front came at exactly 6:32AM as I was on the water prepping the boat for my crew’s arrival.

As white bass typically do with autumn cold fronts, the fish fed hard this morning as the wind’s velocity rose as high pressure built in.

We downrigged until around 8A for a total of 20 fish, including numerous sets of doubles using 3-armed umbrella rigs equipped with Pet Spoons.  Once the sun rose high enough to strike the water, that bite died nearly instantly.

We then headed out looking for large congregations of white bass “carpeting” the bottom after I gave everyone my MAL Lure tutorial with the boat on Spot-Lock.

We found fish at the second of two areas we searched and they were ready to go.  I always know it is going to be really good when the fish rise up off the bottom to meet our falling lures instead of just staying glued to the bottom as the lures draw nearer to them.

All four kids got the hang of the MAL Lure after just a few “real life” iterations, and from then on it was catching, not fishing.  We landed 58 fish on our first Spot-Lock, then nature called and we headed in for a restroom break.  It killed me to pull off of biting fish!

We headed back out in search of fish and, of course, those fish we were on were gone, but, I found another equally willing school of fish, this time in over 50 feet of water (the first time I’ve caught fish that deep since May).  We took another 36 fish from this school by smoking MAL Lures before the kids gave out right around the 10:30 mark.  Hunger and hurting wrists were the chief complaints.  We wrapped up with exactly 114 fish landed, 100% of which were white bass.

OBSERVATIONS:   The fish really put on the feedbag this morning thanks to the arrival of a dry cold front right at exactly 6:32AM.  Although gusts to 23 were forecast, we never had winds over 14 and were able to get in a full trip.

Sky Condition: Clear skies with much particulate matter in the air thanks to the incoming cold front’s wind velocity