WHO I FISHED WITH: This past Friday morning I welcomed back the great crew of anglers (mainly) from Bates Nissan over in Killeen.  Clay O’Dell, the corporate manager, ramrodded the whole event and was joined by his brother, Robin O’Dell, a product specialist, and by Mike Farris, the parts director.  Robin’s son, Tyler, who owns a trucking company in the Cedar Park area joined us, as did a newbee — Mike’s 19-year-old son, Josh Farris.

Josh quickly earned the nickname “The Situation” for reasons only previously known to the rest of the crew, but now herein shared freely with all of you:  tangled lines, fish reeled in too far, more tangled lines, being the youngest guy in the group and therefore the butt of most jokes, etc., etc.   All of this builds character on one’s journey from occasional fisherman to accomplished angler.  Josh made big strides this trip toward this end (according to him!).

All kidding aside, Josh was very conscientious about following my guidance for working the MAL Lure consistently all morning, and his results were right up there with everyone else’s.  To his credit, Josh landed the first hybrid striped bass of his life toward the close of this trip. 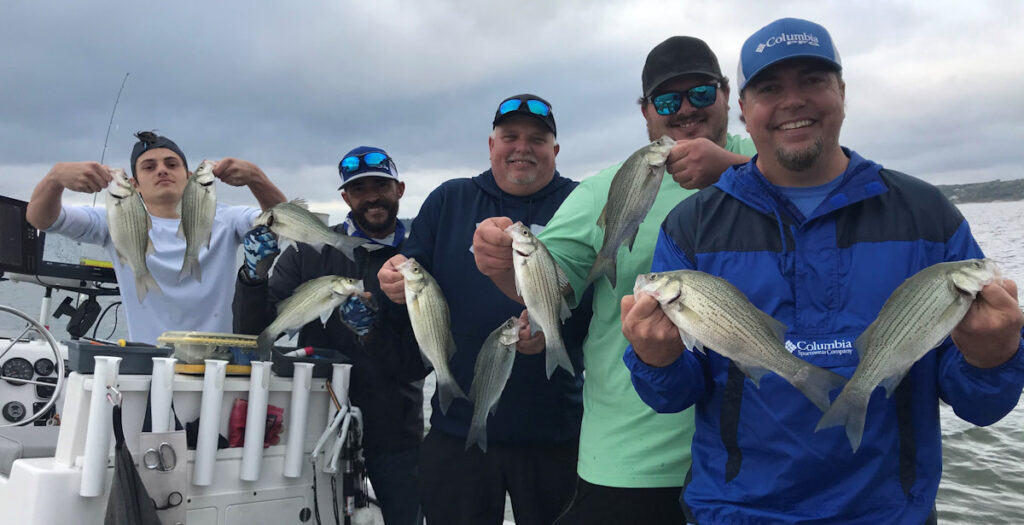 PHOTO CAPTION #1: This was my crew for 06 November: from the back, forward:  Josh Farris, Mike Farris, Robin O’Dell, Tyler O’Dell, and Clay O’Dell. 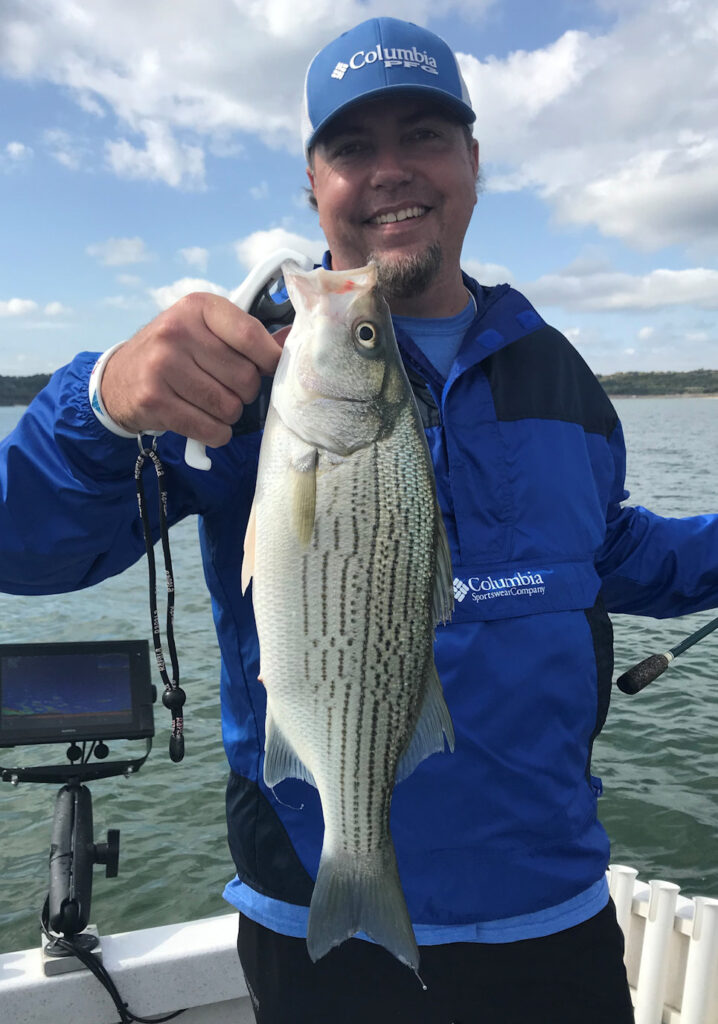 PHOTO CAPTION #2:  Clay O’Dell with a nice Lake Belton hybrid striped bass taken on the MAL Lure.   If you peek at that LiveScope screen behind Clay, you’ll see there were more hybrid where that one came from! 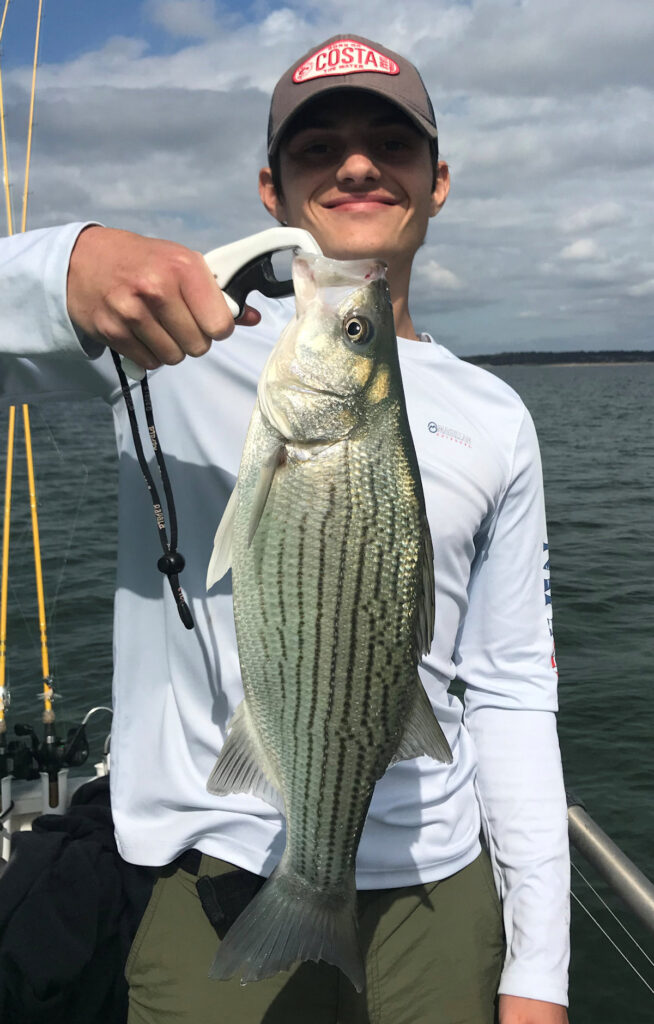 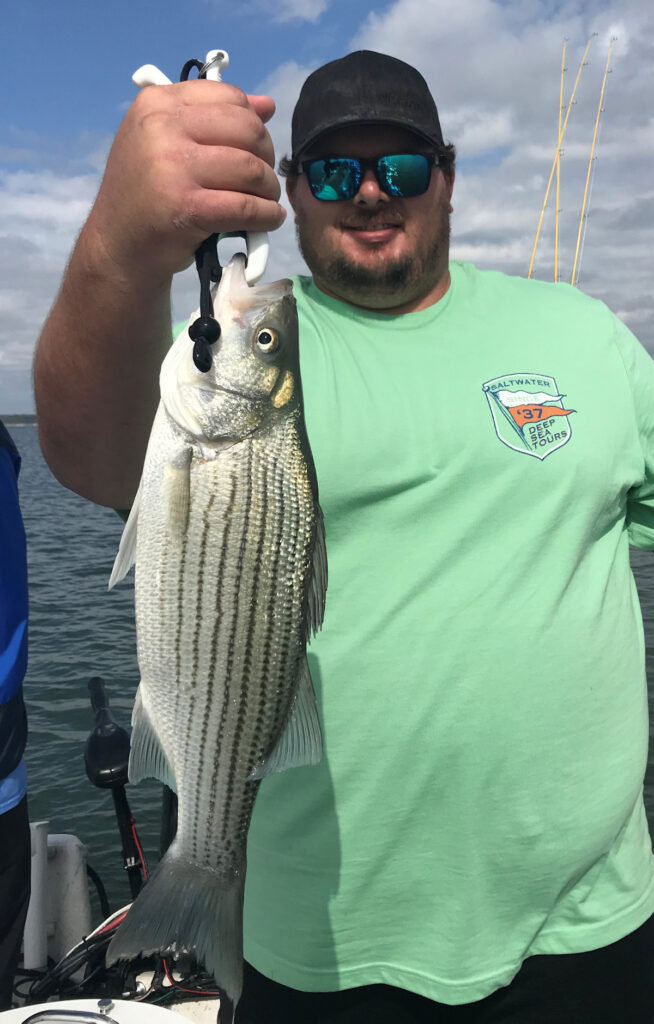 PHOTO CAPTION #4: And that’s Tyler O’Dell with a hybrid of his own.

This morning brought with it the warmest and most overcast morning of the week.  We had both heavy grey cloud cover and patchy fog (for the first hour or so).

I really prefer some cloud cover, as I believe it extends the overall length of the feeding period, but, it also causes the feed to begin later.

We had a slow 35 minutes at the front end of the trip, but, the fish stayed biting until right around 11:35, which is about an hour longer than normal, so, we netted about 30 more minutes of fishing versus a day with clear skies.

Long story short, these fellows put noses to the grindstone and kept their technique sound for the entire morning, resulting in a catch of 288 fish which included a single smallmouth bass, a single freshwater drum, 5 legal hybrid striped bass, and 281 white bass.

Thanks to a prolonged warming spell with southerly winds all week, the water temperature saw a net rise for the week, settling in the mid-60’s.

We caught fish at 4 distinct areas this morning, all in 34-44 feet of water.  The first area gave up 56 fish, the second areas gave up 65 fish, the third area gave up 136 fish, and then the bite died as we fished our fourth area, which gave up a final 31 fish.

Every last fish was landed on either a chartreuse or white MAL Lure retrieved with a moderate cadence.  I layered in the use of LiveScope at our last three areas once everyone had the baseline retrieve method down pat. 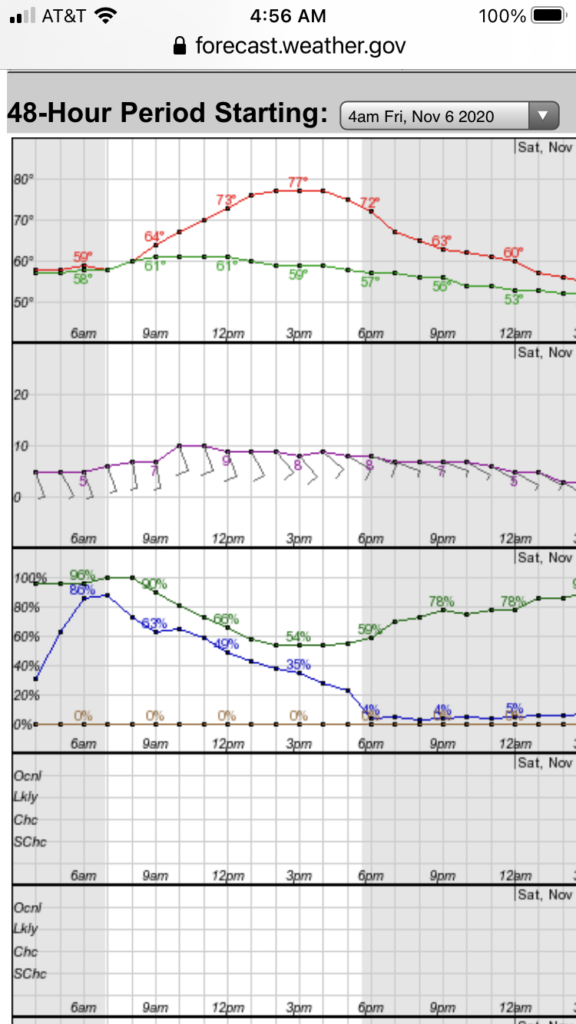