WHO I FISHED WITH: This past Monday morning, November 9th, I fished with two fellows who’ve been fishing buddies for decades: Brad Phillips and Jim Davis.

Brad ran an industrial supply business in Temple for many years and currently does home inspections.  Jim recently retired from the commercial banking business.

Brad received this trip in the form of a gift certificate from Linda Hankins, a close friend of his who operates the Belton Small Animal Clinic.

Linda, Jim, and Brad (and a few others) have travelled internationally to fish together through the years, and I enjoyed having experienced anglers aboard. 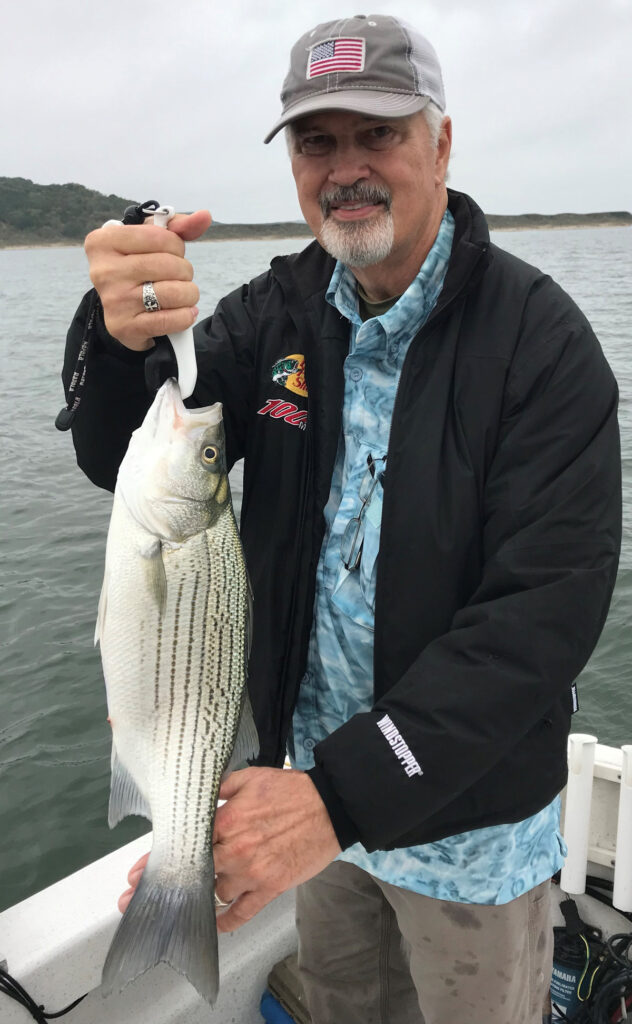 PHOTO CAPTION #1:  Jim Davis with one of the hybrid we took while fishing MAL Lures vertically primarily for deep white bass this morning. 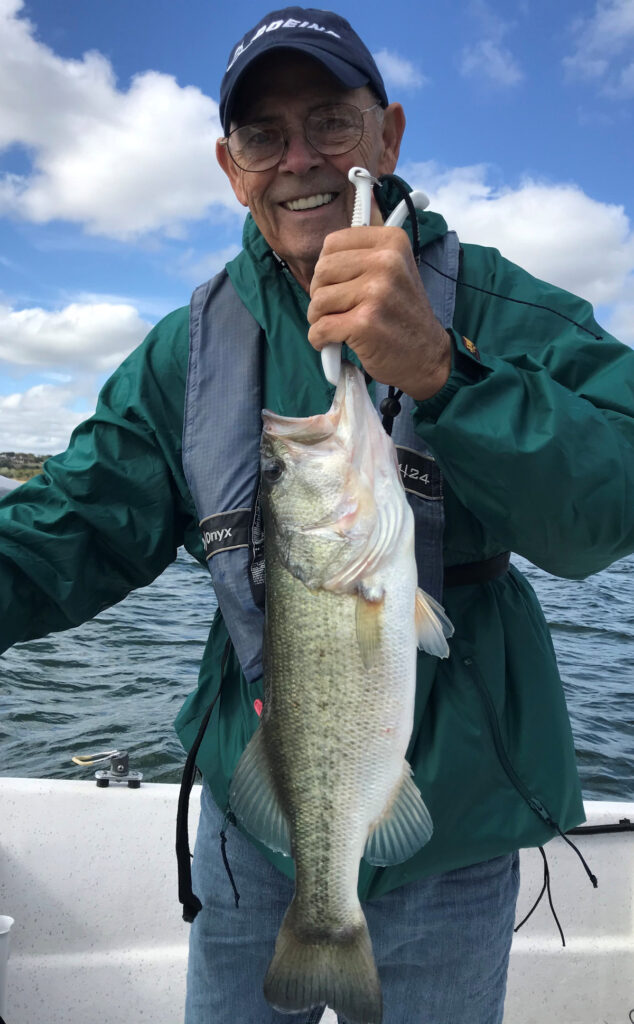 PHOTO CAPTION #2:  This 4 lbs. largemouth was a bit of a surprise.  I came up off bottom after Brad’s MAL Lure as we fishing in 47 feet of water.  Most largemouth I take as bycatch when fishing for white bass tend to be smaller 1 to 2.5 pound class fish. 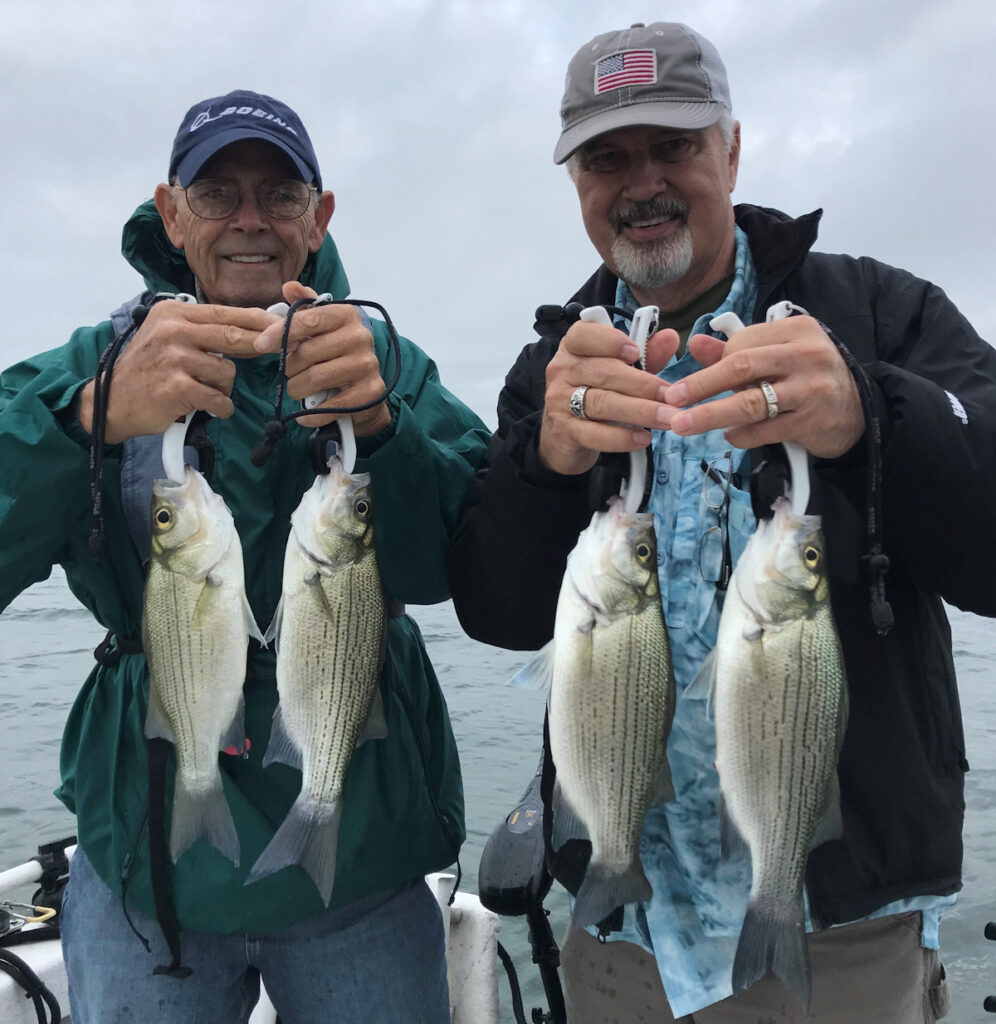 PHOTO CAPTION #3:  We caught a nice mess of white bass today, with above average-sized fish being the norm today as compared to the last 6 weeks’ worth of trips which have included a lot of small fish.

As we got to know each other a bit at the start of the trip, I learned that Brad and Jim were both experienced, well-travelled anglers.  This actually concerned me a bit because oftentimes experienced anglers (and especially male experienced anglers) will not follow the guidance I provide very closely and wind up doing below average as a result.

Fortunately, when I tried to tactfully express this concern, both men understood what I was getting at, and had witnessed examples of other who failed to follow their guide’s suggestions do poorly.

Both fellows got the hang of using the MAL Lure very quickly and, as a result, they caught fish consistently from start to finish, landing 134 fish.

Things started a bit slow with a surprise layer of light fog settling in just before sunrise.  However, it dispersed quickly and we then got down to catching and stayed catching right up until the fish quit at around 11:30.

In all, we hit 5 areas, and each produced white bass which began on bottom (where we located them with sonar) and then climbed higher into the water column as the fish we caught created commotion and drew them upwards.

In all, we landed 134 fish, including 2 legal hybrid striped bass, 4 legal largemouth bass, and 129 white bass.

Wind Speed & Direction:  Winds were ~S6 with the fog, then picked up to S12-14 after the fog lifted.

Sky Condition: Light fog developed right before sunrise, then remained for about 40 minutes thereafter.  When it dissipated, 100% grey skies remained then began clearing around 10AM.  By trip’s end we had 50% white cloud cover on blue skies. 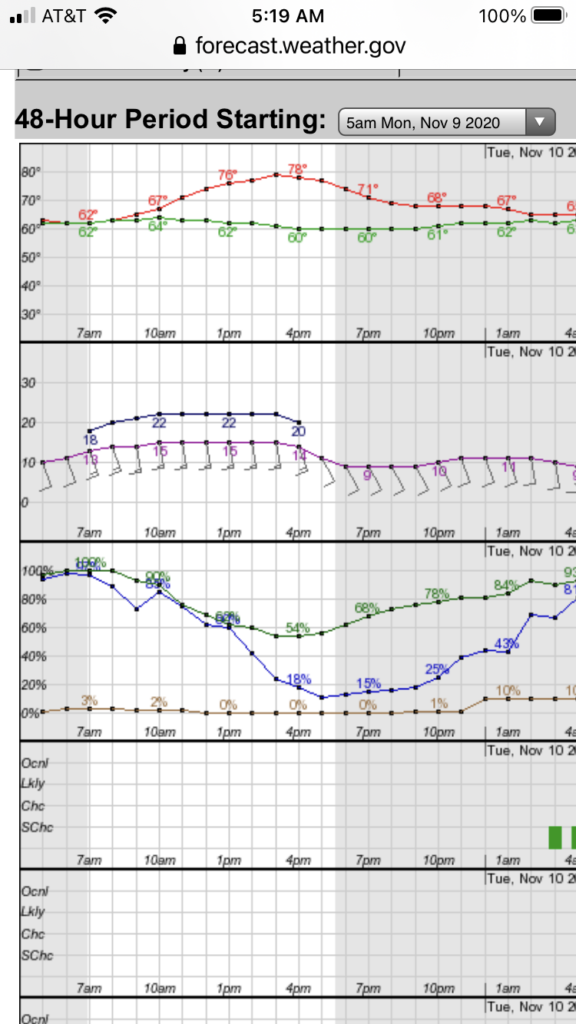