WHO I FISHED WITH: This past Tuesday morning, November 10th, I fished with returning guest Steve Murphy.  Joining Steve this go-round was his son, Ron, and Ron’s son, Ronnie.

This was a farewell trip of sorts, as Ronnie, age 23, is headed off to basic training with the U.S. Navy in December.  He’ll be headed to the Great Lakes for basic and then off to advanced training as a yeoman.

Steve is a U.S. Army veteran and is now retired, and Ron is both employed by Suddenlink and operates his own landscaping company. 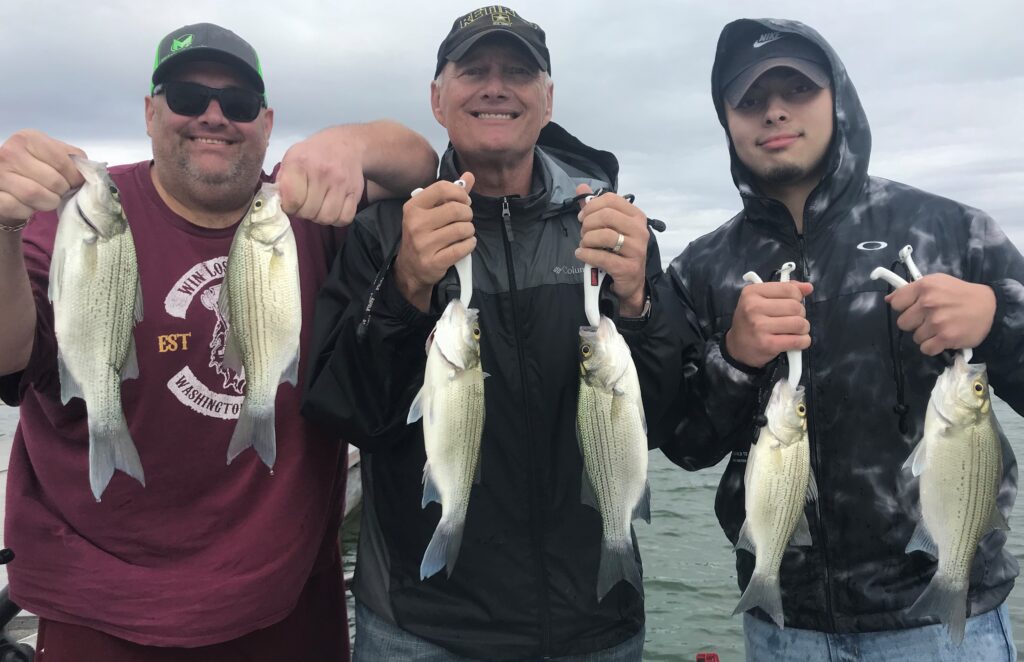 PHOTO CAPTION #1: From left: Ron, Steve, and Ronnie Murphy — 3 generations aboard my boat for a farewell trip for Ronnie before he heads to basic training in the U.S. Navy.

We enjoyed pre-frontal fishing during the last 2 hours of this trip, complete with a windshift from SW through the W, then slightly NW.  As the wind shifted, we watched a line of light rain move towards us from the west (as well as on weather radar, which showed it would be light and short-lived).

The fishing was best just before and just after the rain band passed, although we also caught fish during the brief rain event.

Fishing was just so-so for the first 90 minutes or so this morning as the winds were light and variable and as the sun shone intermittently through high, quickly moving cloud cover.

Once the bite started, it stayed solid right up until it died quickly, right at 11:18AM.

We fished five areas this morning, with each giving up fish to the MAL Lure presented vertically.

The third area we fished was in shallower water than I’ve routinely been fishing in.  I gave it a try when several consistently producing deeper areas failed to show fish present on sonar.  In 26 feet of water and on a gently sloping bottom, we got into the single best runs of fish of the trip, which also corresponded with the winds swinging through the west.  Our previous two stops had produced 13 fish and 5 fish, respectively.  This area produced 58 fish.

After it played out, we moved just as the winds were swinging slightly north of west.  The first area we stopped at had previously not held fish earlier in the morning.  It produced 51 fish.

Our final stop got us to the 150 fish mark, producing a final 23 fish.

OBSERVATIONS:   No helpful bird activity witnessed this morning.  I found solid fishing mid-morning in under 35’ of water (26’) for the first time in quite a while (although I haven’t been routinely checking shallower areas).

Wind Speed & Direction:  Winds were light and variable for the first 2 hours, then during the last 2 hours of this trip, we had classic pre-frontal weather, complete with a windshift from SW through the W, then slightly NW.

Sky Condition: We had fast-moving, high altitude cloud cover which caused the light level to go from dark to bright and back again, although winds were light at the surface.