WHO I FISHED WITH: This morning, Saturday, Dec. 19th, I fished with father and son duo Jason and Mason Woolverton of Killeen.

Jason contacted me a few weeks back wanting to arrange something fishing-related for Mason’s 12th birthday.

The weather and weather forecast were both crazy, and the former bore no resemblance to the latter.  As I rose this morning, there was a 62% chance of rain over the first four hours following sunrise, and a total forecast accumulation of just 5/100ths of an inch … no big deal with some raingear on.

Well, in reality, we endured 2.75 consecutive hours of a cool, steady rain which dropped 6/10ths of an inch or more area wide.  The fellows were troopers, though, and were rewarded for sticking it out through the nasty weather. 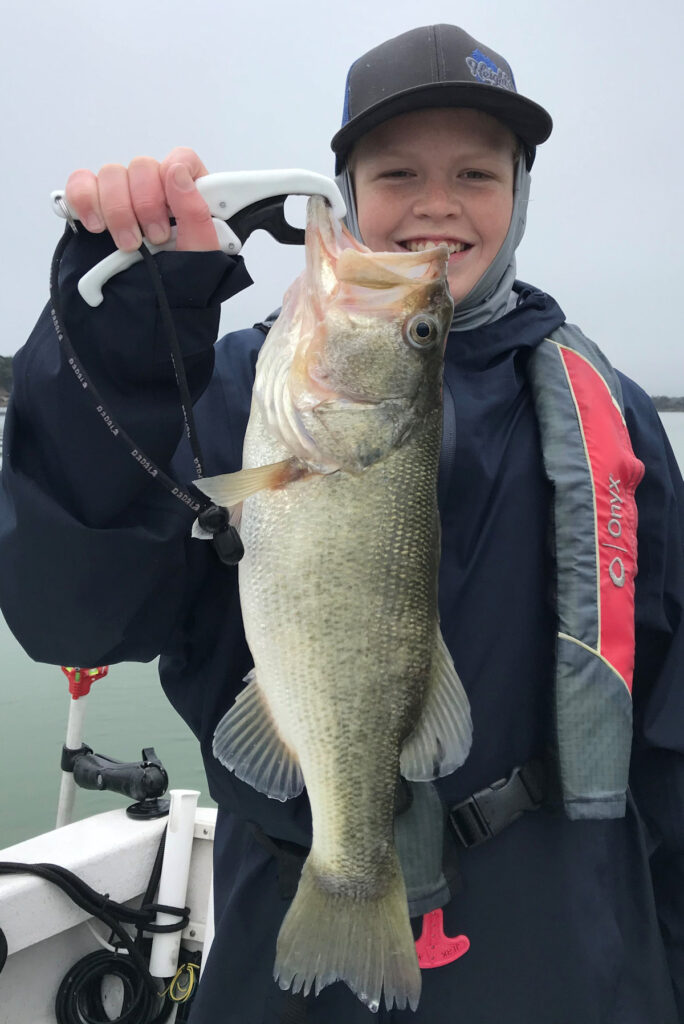 PHOTO CAPTION #1:  I think someone had a great 12th birthday!!  Nice job, Mason! 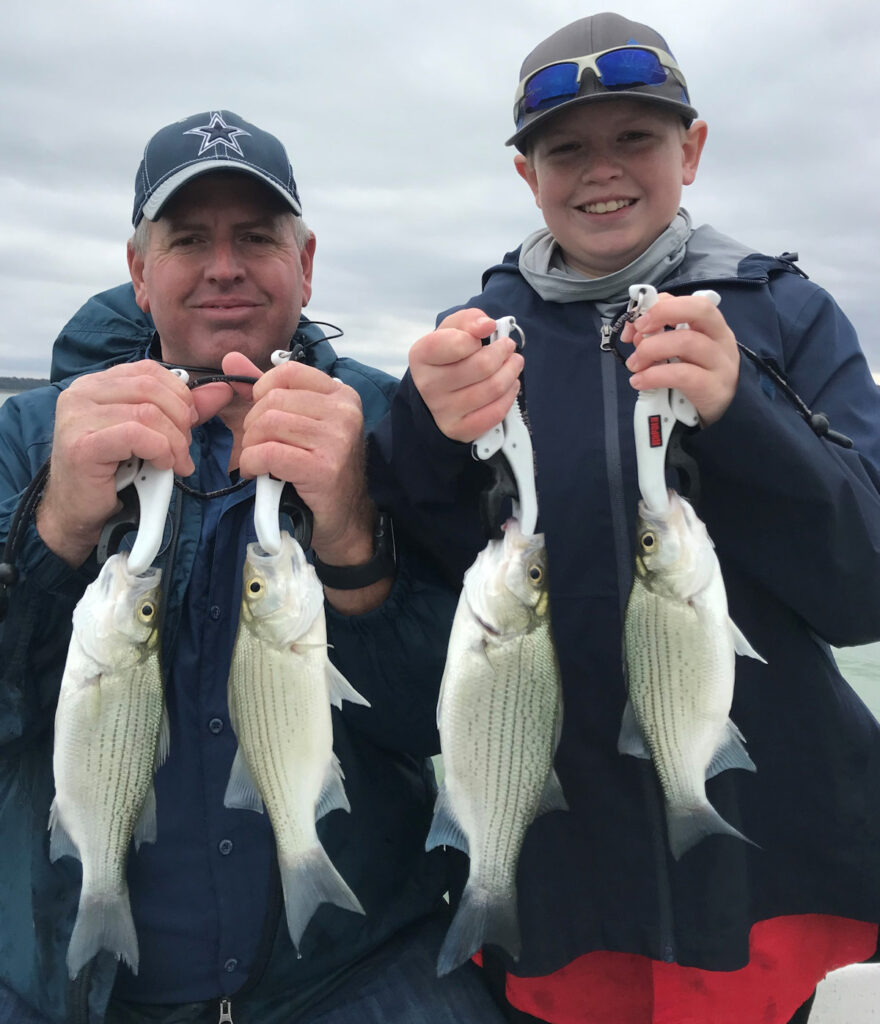 PHOTO CAPTION #2: Father and son Jason and Mason Woolverton with white bass which made up the majority of our mixed-bag catch this morning. 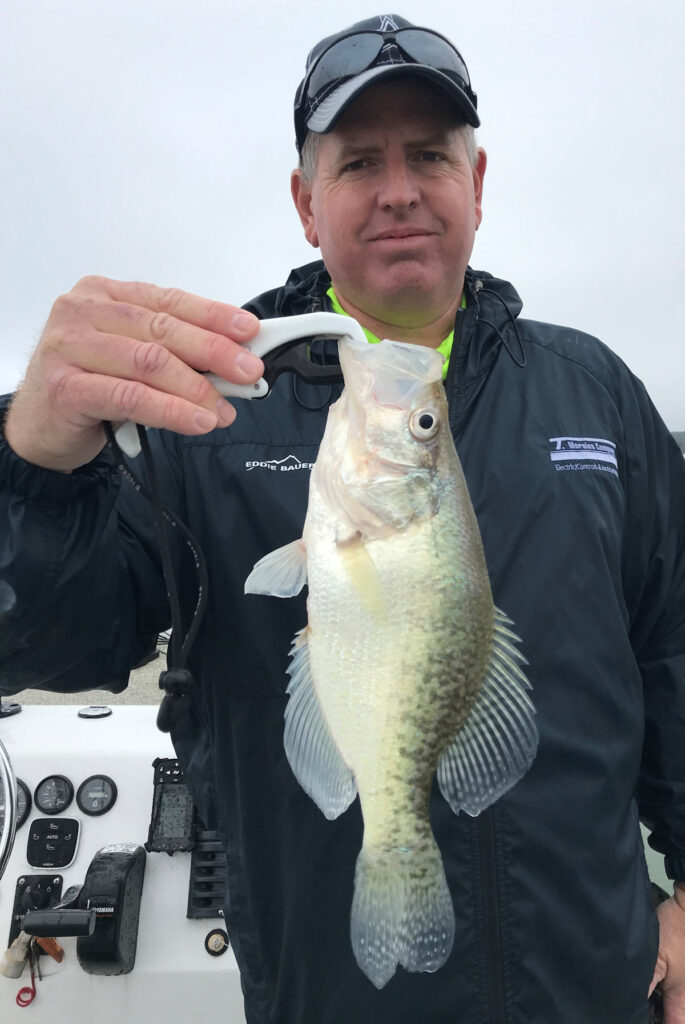 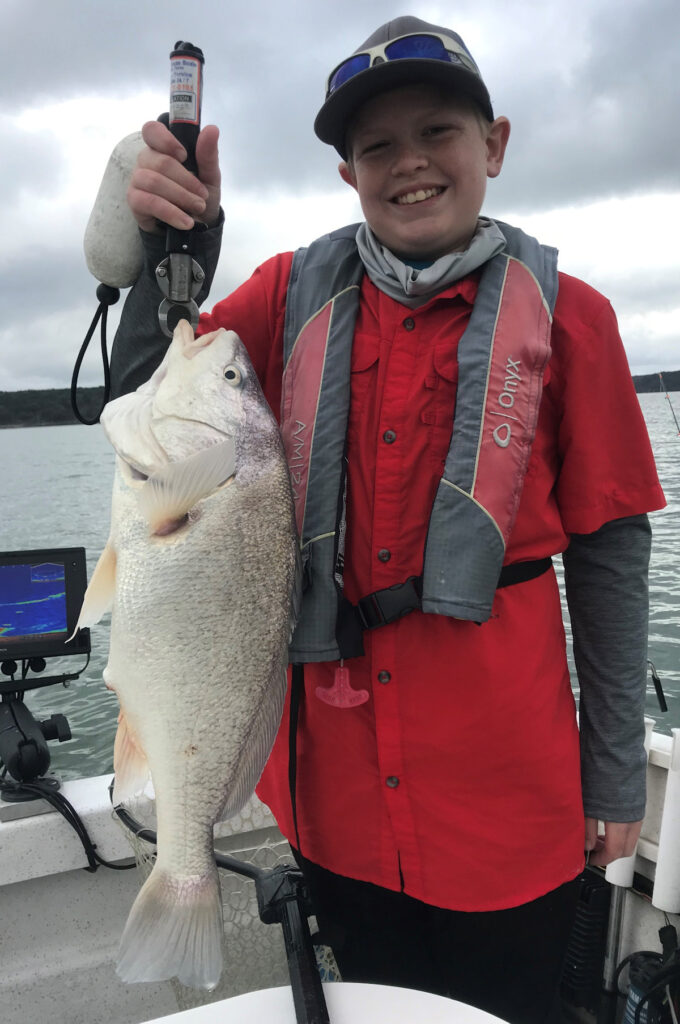 PHOTO CAPTION #4:  Not surprisingly, Mason thought he’d snagged bottom when this 24″, 6.75 pound freshwater drum struck and did not budge.

While the rain fell heavily and kept the skies very dark, we caught not a single fish up to about 9:20AM (with a 7:55AM start).  At this time, I shifted us up shallower, hoping the better-illuminated bottom in shallower water would hold some feeding fish.  This turned out to be the case.

The bite started slowly — we had to pry the first few fish one at a time off bottom, but, with each fish we caught and each “short hop” we made in areas that held bait and fish, the bite loosened up.  From 10:00 to 1:00 was game on, then the fish started to cool off once again.

I extended the trip since we had no luck in the first full hour plus, and, by 12:45PM, we’d managed to put together a catch of 85 fish.  I told the fellows we’d give it until 1:15PM or 100 fish, whichever came first, and they accepted that as a challenge.

During the 30 minutes that followed, we saw the lead edge of a cold front come through and saw the winds uptick significantly, but, this also briefly fired the fish back up.  By 1:08PM we hit 100 fish on the nose and quickly brought in our gear and ran for the ramp before the wind made for a very uncomfortable ride back for two guys who were already fairly soggy.

100% of our fish were caught on an easing tactic using my own 3/8 oz. white Hazy Eye Slabs with Stinger Hooks attached.  Shad regurgitated by the fish we caught confirmed this was the right size bait today.  In addition to the white bass, we landed 9 freshwater drum up to 6.75 pounds, 4 largemouth bass up to 3.75 pounds, and 1 crappie which taped at 14 1/8 inches long.

OBSERVATIONS:  Surface temp at dawn stood at 55.7F.  This is a few tenths of a degree warmer than it was as Wednesday morning’s cold front rolled in.

Sky Condition: Heavy grey skies with rain through 10A, then some breaks and thinning in the clouds enough to allow the sky to brighten a bit. 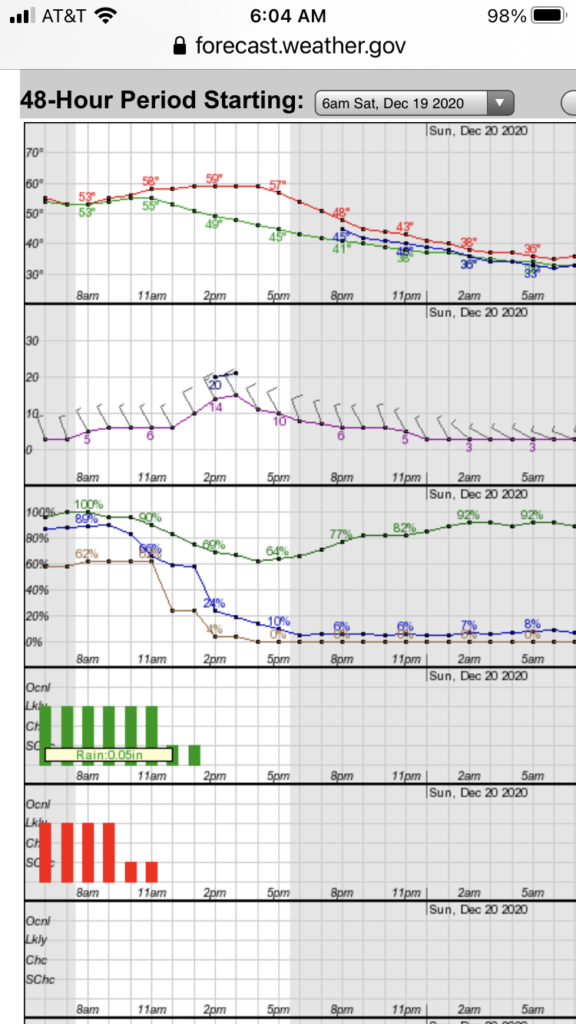