WHO I FISHED WITH: This Christmas Eve 2020 morning I welcomed four troopers aboard for what we knew before starting was going to be a tough white bass fishing trip.

Joining me today was Shawn Leverington, a U.S. Army officer, his step-son, Ryan Blair, a senior at Belton High School, Jerry Saikley, a military contractor at Ft. Hood, and his son, Derek Saikley, who is going on 10 years in the U.S. Air Force.

A cold front began pushing in late yesterday afternoon with high winds and dropping temperatures going into the night and early morning.  As I prepared for launching just after sunrise, it was a cool 31F with a windchill around 24F, thanks to a brisk 13+ mph breeze.

Between the already cold water, dropping temps, and increasing pressure, fishing for white bass was like trying to wake a hibernating bear. 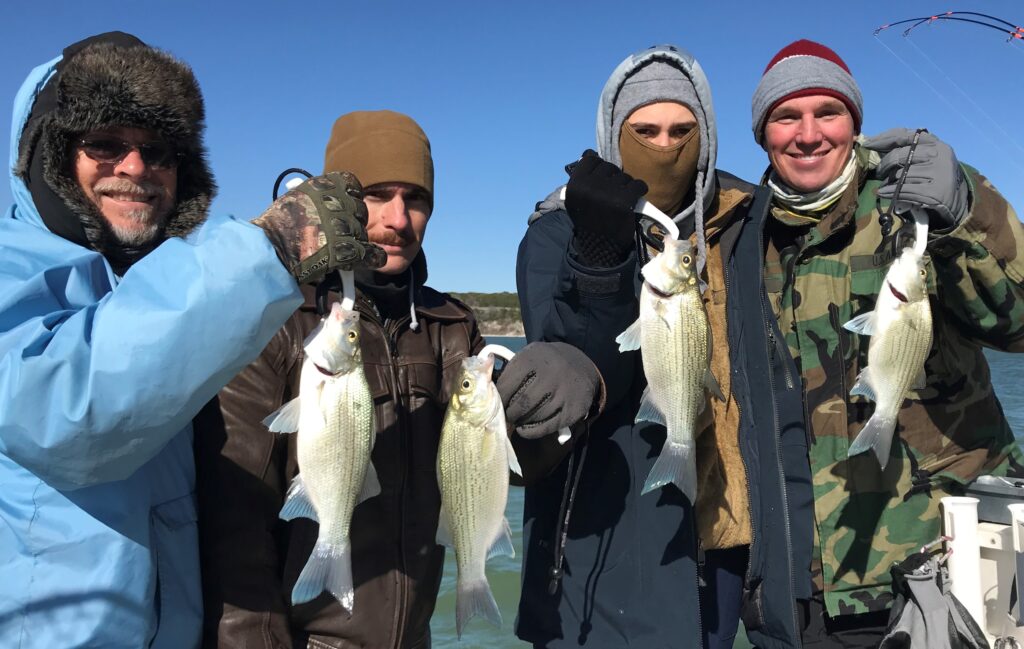 PHOTO CAPTION #1: From left: Jerry and Derek Saikley, Ryan Blair, and Shawn Leverington on their blustery 24 December fishing trip.  You might say it was a “white” Christmas Eve.

To put together our catch of 90 fish, we moved frequently, used small slabs worked slowly, and worked through the distraction of seeing the vast majority of fish sighted on sonar reject our offerings.

I often mention to my clients before dropping my Garmin LiveScope transducer in the water that they shouldn’t look at the screen if they don’t deal well with rejection.  LiveScope opens up the underwater world to you — both the good and the bad.  When you see in real-time how many fish do not go for your lure as a percentage of the whole, it can make even an accomplished angler second guess himself!

We found that the majority of the fish we would catch at any given area would typically come within the first few minutes of offering our presentations.  After we sat over fish which had seen our lures for a while, rarely would any of those fish be fooled.  As this played out and we noticed this trend emerge, we spent less time laboring for stubborn fish, and moved more frequently to get our presentations in front of “fresh” or “dumb” fish.

Fish were generally glued flat to bottom today and held together in small groups.  These groups would not move far or fast out of curiosity to any noise or commotion we or the fish we hooked created, thus, we did “short hops” to move to the fish just a few boat lengths from us as witnessed on sonar.

Of the 90 fish we caught, every single one pursued our lures upwards from the bottom or struck while the lure was at bottom before we raised them upwards.  Not a single fish was taken while moving our lures past suspended fish (in fact, very few suspended fish showed on sonar all morning).

We worked white, 5/8 oz. Hazy Eye Slabs with stinger hooks attached.  If we had less wind, I’d have bumped down to 3/8 oz., but the extra weight kept lines hanging vertically and helped avoid tangles.  The 3/8 and 5/8 Hazy Eye Slabs are the same length, with the 5/8 version being thicker and wider than the 3/8 oz. version.

We put in about 5.5 hours of effort for the 90 fish we landed.  This catch included 5 freshwater drum, 3 largemouth bass, and 82 white bass.

Sky Condition: Bluebird skies in conjunction with the cold front moving in 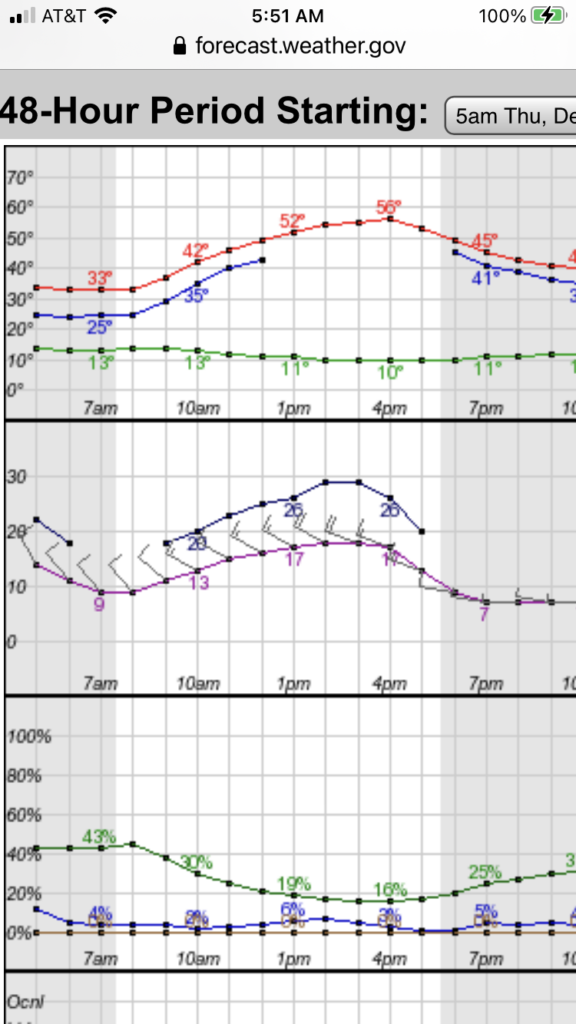