I was concerned about the weather because as far back as Friday afternoon, the NOAA forecast was calling for near zero cloud cover and light winds.  I would normally postpone under such conditions if they followed a cold front, but, the cold front’s impact was most drastically felt on Saturday.  Sunday saw a return of southerly winds, so I knew we could catch fish this morning, albeit with some effort.  Besides, the kids’ schedule had no flexibility, so we took lemons and made some lemonade. 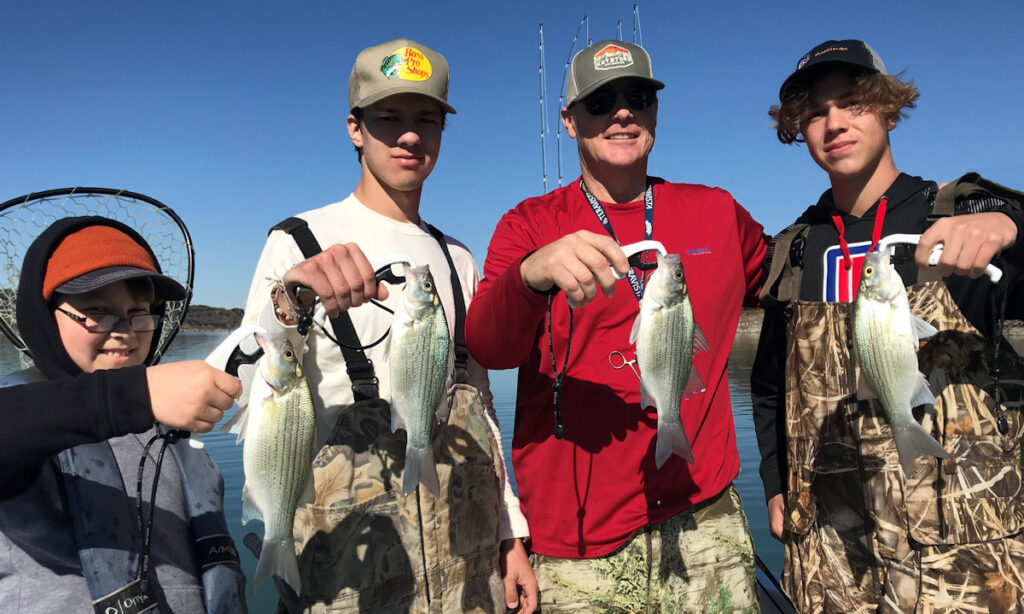 PHOTO CAPTION #1:  This was my crew this morning, from left: Levi, Owen, Ty, and Ian. 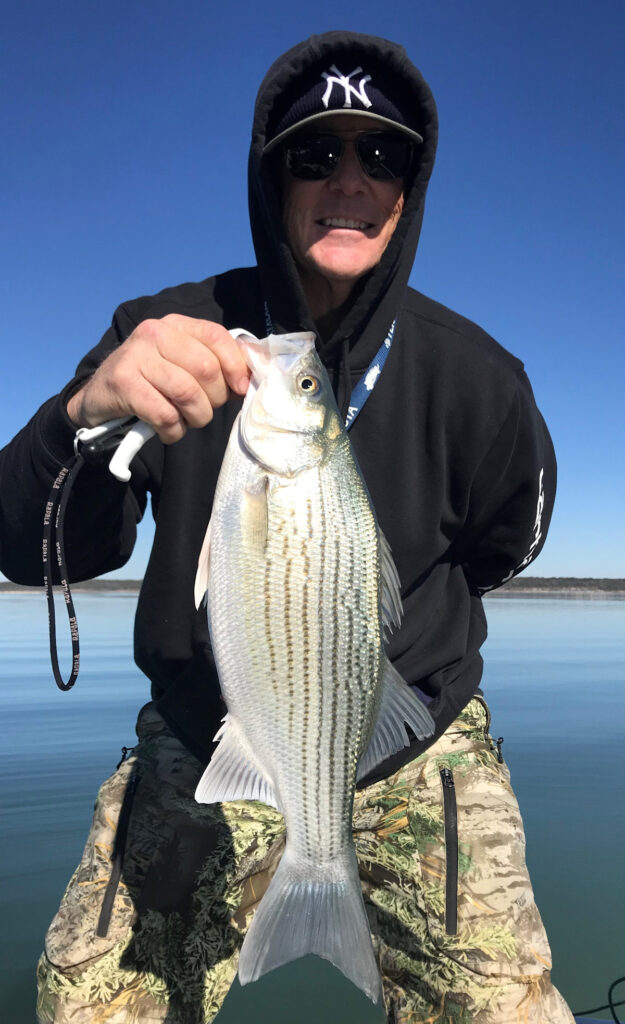 PHOTO CAPTION #2:  Ty wound up boating the biggest fish of the day, a 19-inch hybrid, thereby earning the right to buy lunch for everyone!

Before we left the launch area this morning, I provided a “live demo” on how we would need to slowly and methodically move our slabs in order to have success this morning.  Once it seemed everyone understood what we were doing and why we were doing it, we moved out to hunt for fish.

Fish were not all that hard to find today, but the ratio of biting fish to fish found was, as anticipated, pretty low.

By the second area we stopped at, everyone’s technique was effective enough to catch fish consistently, and, as the skies brightened and the fish roused a bit more, our catch rate began to climb.

Fishing was slow but consistent, and the diminutive, white 3/8 oz. slab got the nod for use this morning.  As we had fish regurgitate the shad they had eaten, that 3/8 oz. Hazy Eye Slab was a dead ringer for the real deal.

Around 10AM, the bite began to weaken, as the fish would only fire as soon as we dropped our slabs down, but would shut down soon after.  In hopes that more open water would at least be rippled by the wind, I chose to change locations.  When we did, I found a handful of helpful birds (mainly terns) working a small patch of open water.  We checked it out with sonar, saw fish both on bottom and suspended, Spot-Locked on them, and broke out the MAL Lures for about a 45-minute go at some fish which were generally large than those we’d been catching up to that point.  It was during this time that Ty landed our one and only hybrid of the trip.

To tempt the fish with the MAL, we had to get the blade going with as little handle-turning as necessary, then downshift to as slow a speed as possible while still keeping the blade spinning.  Even when it wasn’t fish quite perfectly, it still out-produced slabs while the fish were aggressive.

By around 11:00, the fish had settled back down, so we took a “middle of the road” approach and used our slabs with a slow-smoking retrieve (as they can be worked a bit more slowly than MAL Lures which require a bit of speed at the beginning of the retrieve to get the blade going).  This worked well for another 30 minutes and then these open water fish gave up altogether.

By now it was noon and I told everyone I’d try to get us on fish one last time so everyone could go home with a rod bent right up to the last minute.  We did find one final school of fish, and, although they were small, the boys enjoyed catching them.

We wrapped up this morning with 85 white bass, 2 freshwater drum, and 1 hybrid striped bass.

OBSERVATIONS:  About 30 minutes of helpful bird activity from ~10:15 to 10:45 under calm, bright conditions.

Elevation:  .72 low with a 0.02’ 24-hour fall and 34 CFS flow thru the dam (Belton rose about 0.50 feet with the rain which fell last Wednesday and Thursday.  Although 2.0 to 2.5 inches fell area wide, it came in doses which soaked in, resulting in minimal runoff. 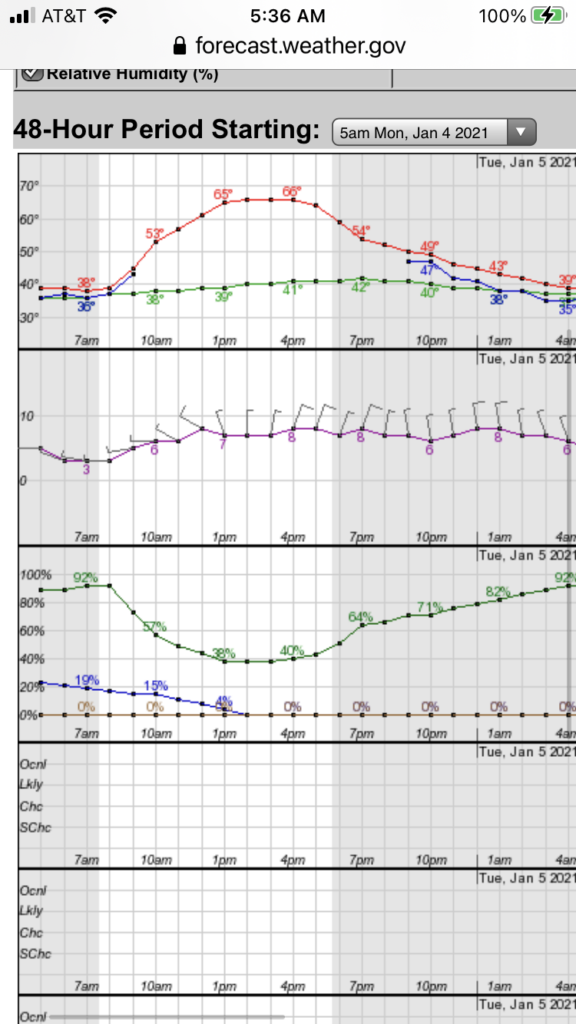