WHO I FISHED WITH:  This morning, Wednesday, January 20th, I fished with bass tournament fishing partners Frank Ellis and Ryan Warren.

There has been an upwelling of interest in fishing vertically in deep water for winter bass in advance of the high-stakes Tuff-Man championship event to be held this coming Saturday and Sunday, with the first day’s event on Stillhouse, and the final day’s event held on Belton.  This was the second team associated with that series to seek input on fishing deep water with sonar this week.

As with my trip yesterday, these experienced bass anglers wanted me not to take them bass fishing, but wanted to really study the approach I take to consistently boating white bass in the winter months, knowing that my bycatch often consists of enough quality fish to place in tournaments this time of year.

I shared with Frank before we agreed on the trip that, “I want to respectfully remind you that I am a white bass/hybrid specialist who happens to pick up a few nice largemouth bass as bycatch every winter.  I would not in good conscience accept a client wanting me to take them largemouth bass fishing.”

He and Ryan understood where I was coming from, we agreed to the date, and I had the freedom to pursue fish as I normally would while they closely observed what was going on for anything they could seize on to help them in their own efforts. 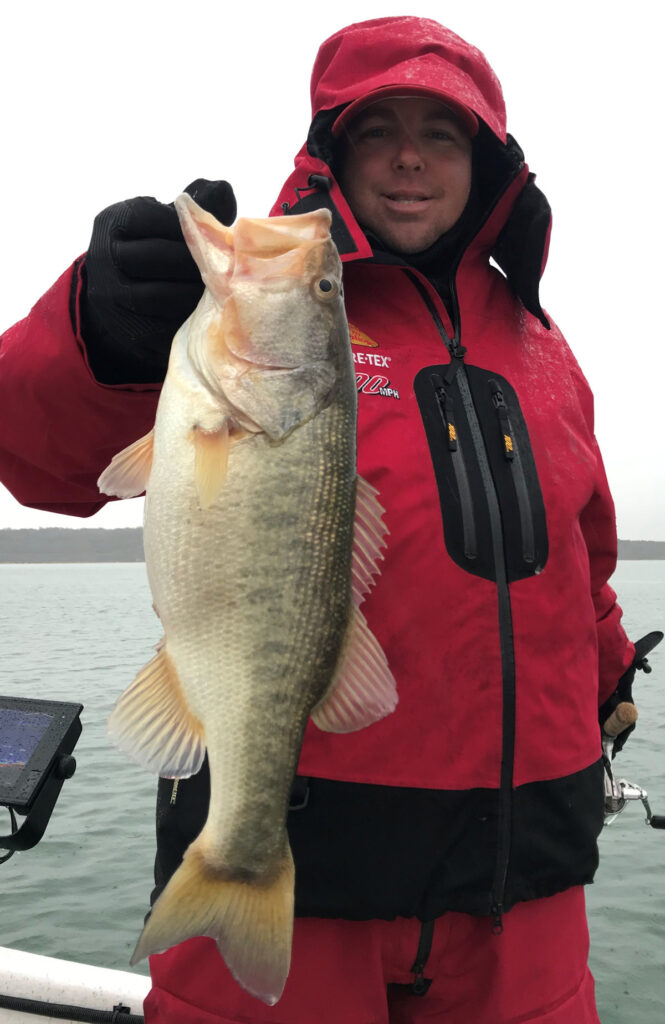 PHOTO CAPTION:  Stillhouse continues to produce quality bass.  Thanks to slackening winds following yesterday’s cold front, tough fishing in 49F water got even tougher as we had to finesse these fish into biting on my smallest 3/8 oz. Hazy Eye Slabs with stingers attached. 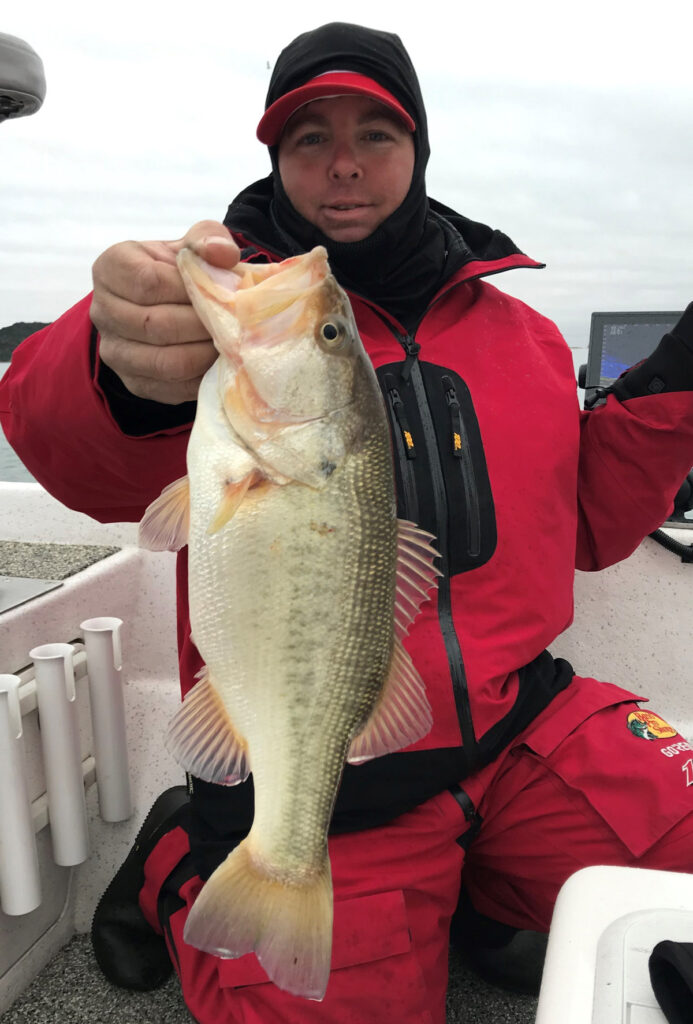 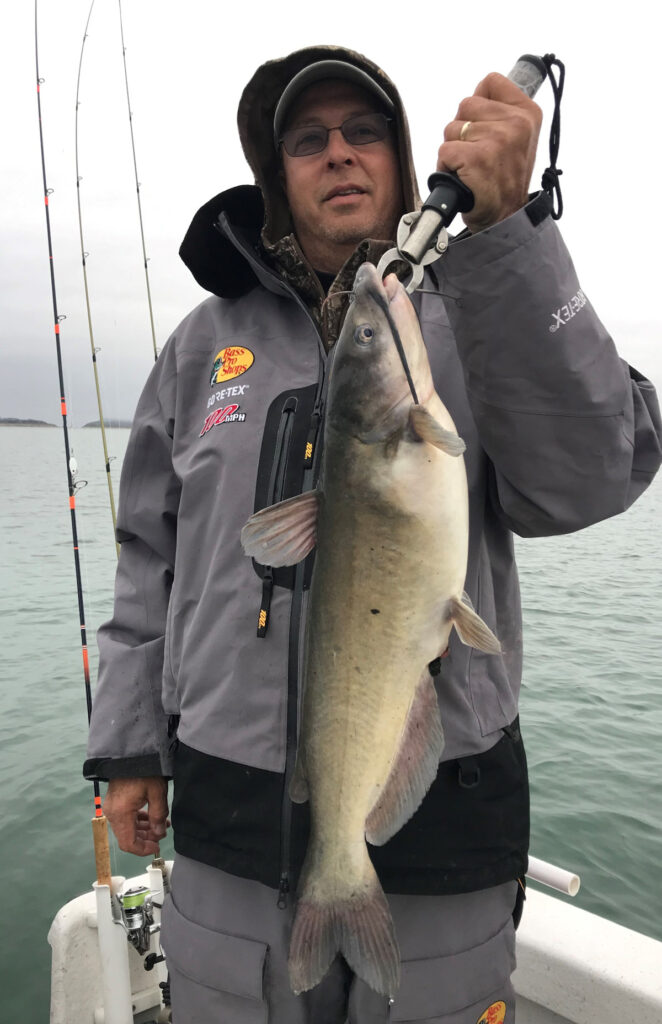 PHOTO CAPTION:   Frank got a little more than the white bass he bargained for, as well!  This 8.125-pound rascal came from over 50 feet of water.

This morning’s fishing was slow, with already cold (49F) water and a post-frontal weather scenario overlain on that.

Regardless, we got out there an fished, knowing the “reject rate” (the number of fish that nose at a bait but ultimately refuse it) was going to be high.  We raised countless fish this morning from as much as 57 feet of water, but even that extra deep water did not serve as an insulator against the cold front’s effects.

We devoted our first two hours to chasing fish aided somewhat by bird activity, then relied solely upon sonar during the last half of the trip to find channel-oriented fish.

Most of our effort was invested in fishing the 3/8 oz. Hazy Eye Slabs vertically while observing them, and fish response to them, 100% of the time via Garmin LiveScope.  Thanks to the fact that both Frank and Ryan already had LiveScope experience, we avoided the premature hooksets many “LiveScope rookies” tend to make while watching the screen instead of feeling the line and observing rod tip.

We finished up with exactly 41 fish, including 4 largemouth bass, 1 drum, 1 channel catfish, and 35 white bass (all well-exceeding minimum size).  Ryan was especially appreciative of the help I offered in understanding the bass/forage relationship as we discussed shad and sunfish in detail, and as he was able to observe the things I explained in real time on the water.

OBSERVATIONS:  The water temperature remained at 49.6F for a third consecutive day.  Although the COE is releasing ~240 CFS, the lake actually rose slightly due to intermittent, light rain fall following yesterday’s frontal passage. 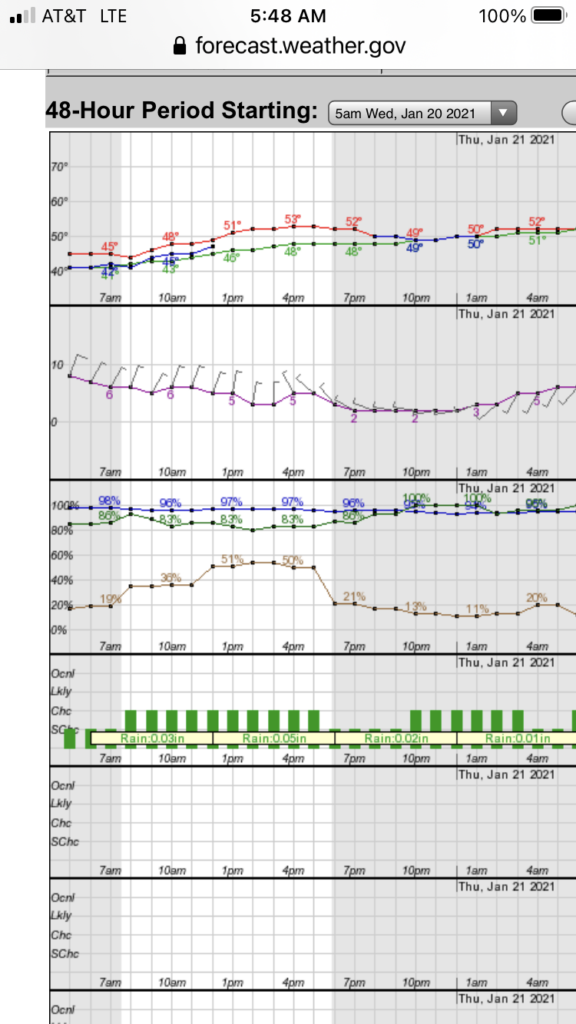