WHO I FISHED WITH: This morning I welcomed back perennial guest Dwight Stone of Georgetown, this time accompanied by his brother Duane Stone, a retired Alaskan State Trooper from Glenn Allen, AK.

Like Dwight, Duane enjoys just about everything outdoors.  Lots of good fishing stories were shared this morning!  My favorite was listening to the process of cutting a 4′ x 4′ hole through several feet of ocean ice to drop a crab trap through, only to place styrofoam and snow over it as insulation so the same several feet of ice didn’t have to be removed a second time to retrieve the fresh crabs a week or so later.

Most of our action came early this morning and, by 11:30, despite the bottom we were over being littered with fish, those fish were done.  We proclaimed it “Miller Time”, which meant Dwight would be taking Duane over to Miller’s Smokehouse in Belton, as has become his custom anytime he brings someone to fish on Stillhouse or Belton for their first time. 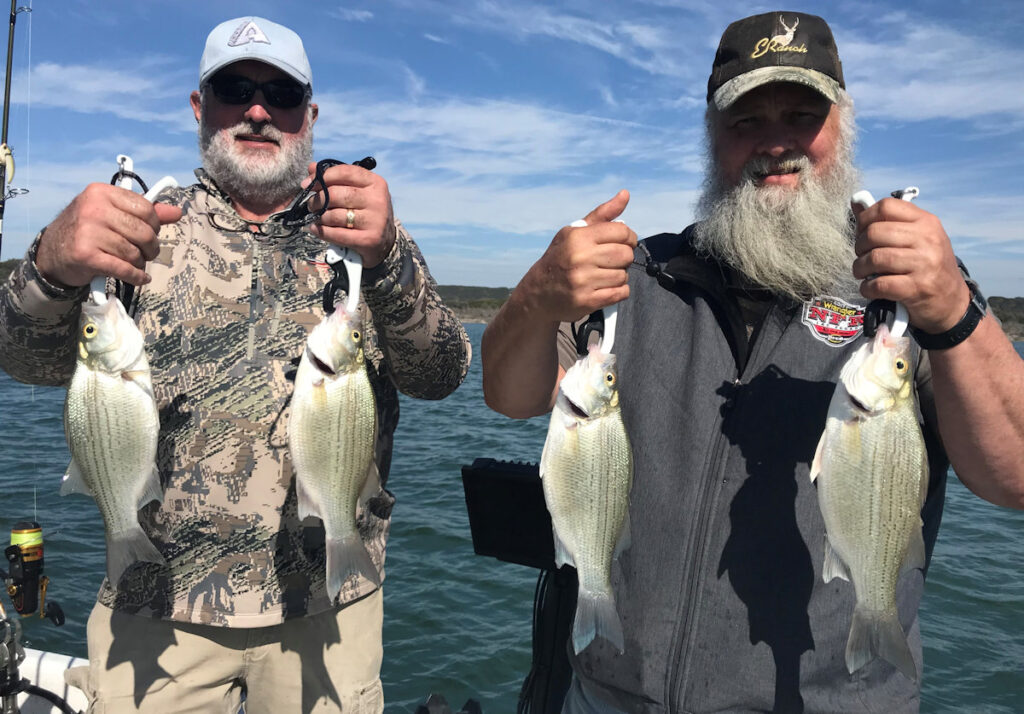 PHOTO CAPTION: From left: Dwight and Duane Stone with a portion of our catch taken from ~52F water on Stillhouse this morning.

With an incoming, dry, mild cold front due to change the weather once again, today was what I anticipated would be the best of the weekday fishing, which Dwight had asked me to try to hand-pick for him and his brother, since both are retired and have flexible schedules.

The front did, indeed, arrive, but at around 3pm with winds shifting from W to NW and increasing from 14 to ~17 just briefly.

Our fishing this morning, was a few hours too early to get in on the pre-frontal bite, so, we dealt with pretty average mid-winter conditions.

Birds helped out for about 90 minutes, and some passing cloud cover late in the first half of the morning helped out as well.

We took fish on a combination of MAL Lures when we found fish willing to rise up off bottom for a lure and give chase, and we used bladebaits when the fish were more reluctant and were in under 22 feet of water (as blades don’t work quite as well in water much deeper than that).

We observed that moving frequently was a great asset today, as the fish we caught generally were caught soon after arriving at an area and beginning our presentations.  The longer we stayed, the more reluctant the fish became.  It was tempting to sit on top of fish clearly displaying on Garmin LiveScope, but, when those fish just wouldn’t play along, chances were better that we’d put fish in the boat by moving, even if only a few boat-lengths away.

We caught 4 fish here, 6 fish there, maybe 7 or 8 at most at a single area.  Moving was essential.

We wound up with 52 fish in 4.5 hours of effort, including 1 largemouth going right at 4 pounds, and 51 white bass.

Although I was pleased that with the water warming from a low of 48F a week or so ago to its current 52+ allowed us to bring the MAL Lure back into our arsenal, I’m afraid we’ll be headed back down the scale if next week’s forecast comes to fruition.

OBSERVATIONS:   Most of this morning’s feed took place by 9:30A.

Wind Speed & Direction:  SW9 at trip’s start, swinging to WSW and increasing to 13 by trip’s end, still a few hours in advance of the incoming, dry cool front. 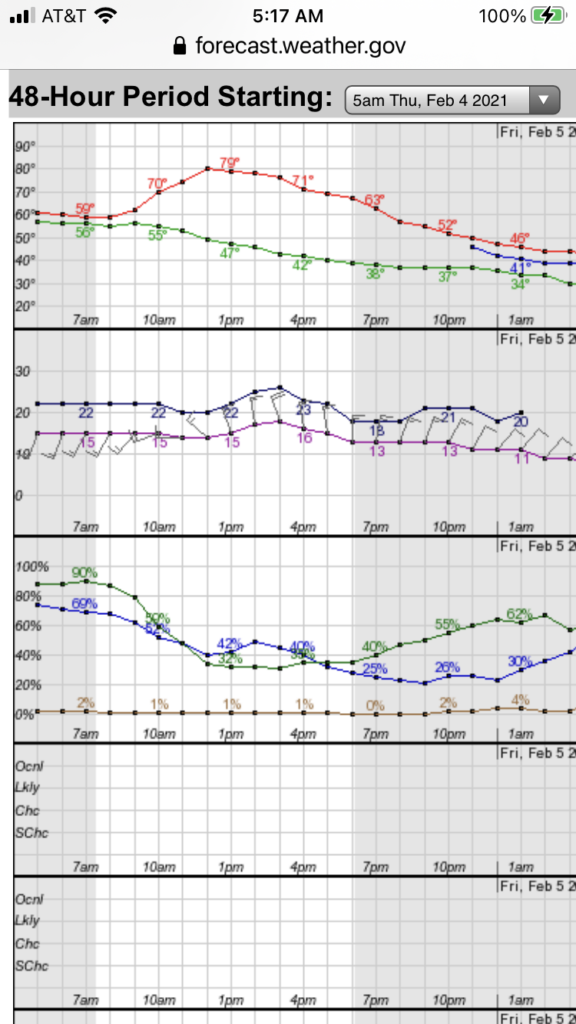