WHO I FISHED WITH: This morning, Monday, February 8th, I fished with Todd Hudler of Academy, Texas, and his sons, Luke (age 13), and Hunter (age 11).

Todd is part of the Nuclear Medicine Department at Baylor Scott & White in Temple, Texas, where he manages the mobile PET Scanning operations.

Both of the boys are involved in the Academy Future Farmers of America (FFA), and, at a recent fund-raiser, their dad bid on a fishing gift certificate I had donated.

The boys were off from school today for “fair day” which is when the kids involved with FFA make preparations for showing their livestock at the Bell County Expo Center, so they invested the morning in pursuit of fish then got down to business in the afternoon.  The boys both raise rabbits and were planning on getting their prep done after the fishing trip. 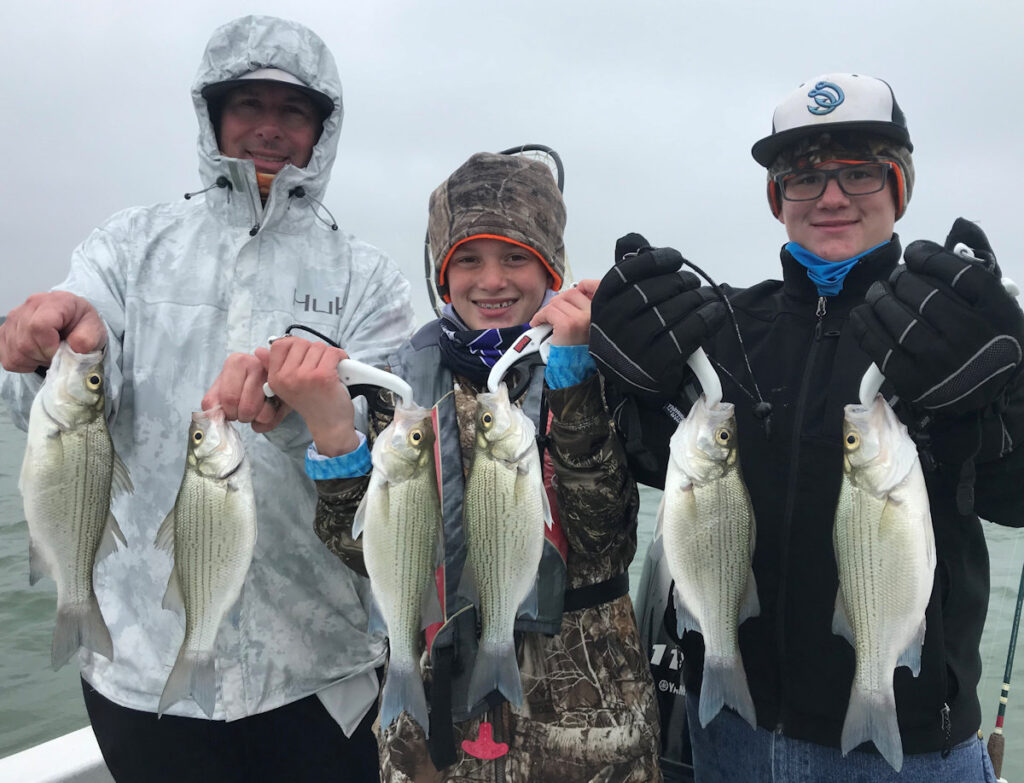 The prevailing weather factor this morning was a persistent fog which cut visibility to about a third of a mile through around 10:30A when it finally began to thin (although it never cleared during the trip’s duration).

Given this scenario, I started looking for fish up shallow this morning where the limited light would be illuminating the bottom more so than in deeper water.  We took our first 7 fish in under 25 feet of water after making a few short hops to target “fresh fish”.

Our next move was out to 30 feet of water.  We found 3 pods of fish on a slow-tapering bottom and found them willing to strike as soon as we arrived, but also found they would shut off pretty quickly.

As I was looking for our fourth pod of fish in this same vicinity, some helpful bird activity pointed the way to our best fishing of the morning in terms of both quality and catch rate.  About 30 terns aggressively worked a patch of water about 200 yards in diameter for about 30 minutes.  Although the fish still were not uber-aggressive (after all, the water temp is just 53F), they were willing to chase MAL Lures better than the slower Hazy Eye Slabs we’d been using up to that point.  Once the bird action subsided, our catch rate dropped back off, and we moved on to our two final areas, both in deeper (50+ foot) water.

We found primarily small fish carpeting small segments of bottom at two distinct areas and were able to tempt perhaps one in every 15 or 20 that showed themselves with some target separation off bottom.

We finished up right around 11:15 as the bite was slowing to a crawl with exactly 59 fish landed in our 4.25 hours on the water.

OBSERVATIONS:   The fog, as usual, made it tough (but not impossible) to excite fish today … I wish I understood that connection.  Understand it or not, there is definitely a connection between fog and slow fishing.