WHO I FISHED WITH: This morning, Tuesday, April 6th, I fished with first time guests Randy and Sherie Garrett of Temple.  This retired couple bought a gift certificate from me for Randy’s birthday last year and finally waited through COVID, etc., to redeem it today.

Randy will turn 70 this year, and the two will celebrate their 50th wedding anniversary in 2021, as well.

NOAA called for high winds today, so, we headed to Stillhouse to try to escape the worst of it.

For two lakes so near one another, Stillhouse and Belton certainly fish and produce fish very differently.  I’ve told clients for the last several years (if they have a preference) to choose Stillhouse for quality and Belton for quantity. 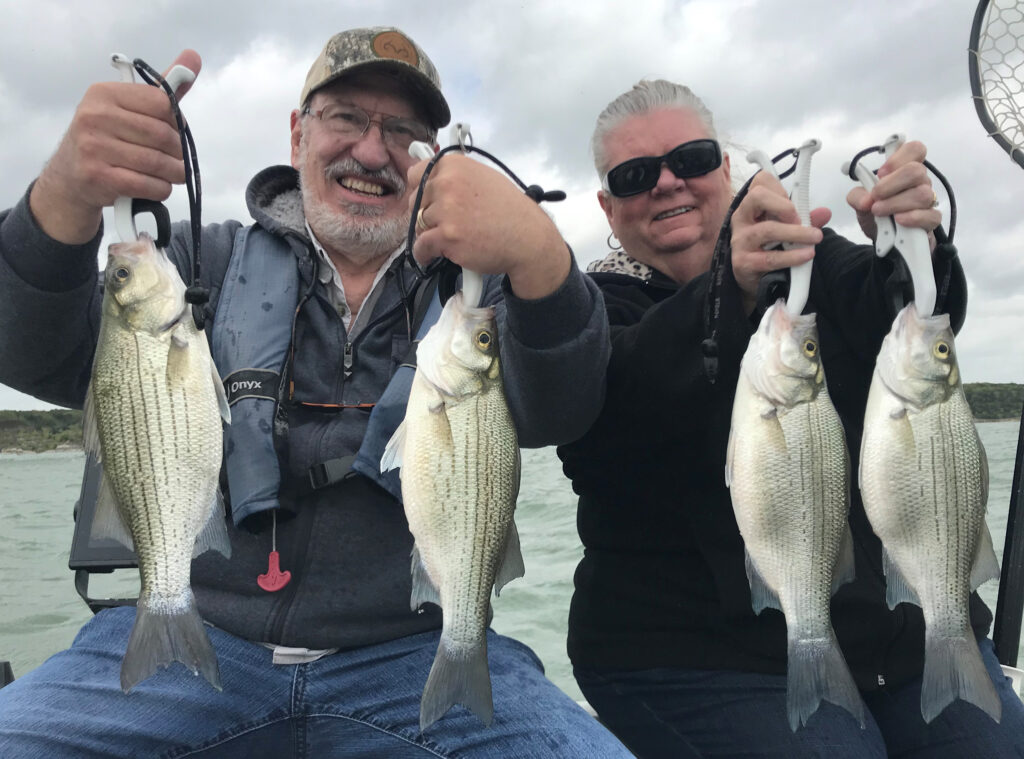 PHOTO CAPTION:  Randy and Sherie Garrett accompanied me on Stillhouse Hollow this morning.  We heeded the NOAA wind forecast and fished Stillhouse instead of risking being denied access to areas I’d have fished if we had headed to Belton.  The quality of the white bass at Stillhouse is hard to beat in this part of the Hill Country.

This morning was very “murky” grey.  There is a big difference when it comes to early morning fishing on light levels being reduced by cloud cover.  When I say “murky” I mean sufficiently dark that your eyes need not squint without sunglasses on to filter out light to a comfortable level.  This is usually not a good omen for a great start to a trip.  On the other hand, skies can be fully greyed over, yet with enough light still coming through to make you squint (or want to put on sunglasses) due to cloud cover thickness — such a light level is something to get excited about.

This morning, unfortunately, we endured the former and struggled in the first hour to put more than a handful of fish in the boat at any of the three stops we made.

The later and brighter it got (although still 100% greyed over), the better the bite got.  We found scattered schools of white bass on flats adjacent to the river channel and caught them on bladebaits by casting horizontally; we found tighter, larger groups in a few similar areas and worked MAL Lures through them vertically; and, we found a few small fish driving bait to the surface and visibly/audibly feeding on them there.  We cast Cork Rigs to these fish and did well during the short span during which that took place.

Our best fishing of the morning took place from 10:40A to 11:20A as we enjoyed the first, albeit brief, breaks in the clouds letting direct sun come though, accompanied by a sharp increase in the wind speed from ~12mph up to ~15-16mph.  During this time, fish appeared suspended at mid-depth in 23 feet of water and they were moving horizontally very rapidly.  Fish on bottom rocketed up off bottom to chase our MAL Lures, and we caught nearly as many fish in this window as we had for the entire balance of the morning.  By 11:30A these fish shut back down to the low energy level we’d seen most of the morning, and we called it a good morning right around 11:35 with 54 fish landed, including 52 white bass, 1 largemouth bass, and 1 freshwater drum.

The largest of our white bass stretched to 14+ inches and still were plump with spawn.  The Garretts had never fished for white bass before and their catch of 54 fish was the greatest number of fish they’d ever caught in a single trip.

OBSERVATIONS:  Only 3 gulls spotted anywhere on Stillhouse today, and they were not feeding.  Cormorants, white pelicans, and ospreys were present.  Most of the coots have now moved on and the white herons are beginning to show up. Whippoorwills can be heard in the cedars before sunrise now — the first I heard was on 04 April.

Wind Speed & Direction: SSE12 through 10:40, then increasing sharply as some sun broke thru the clouds to SSE15-16 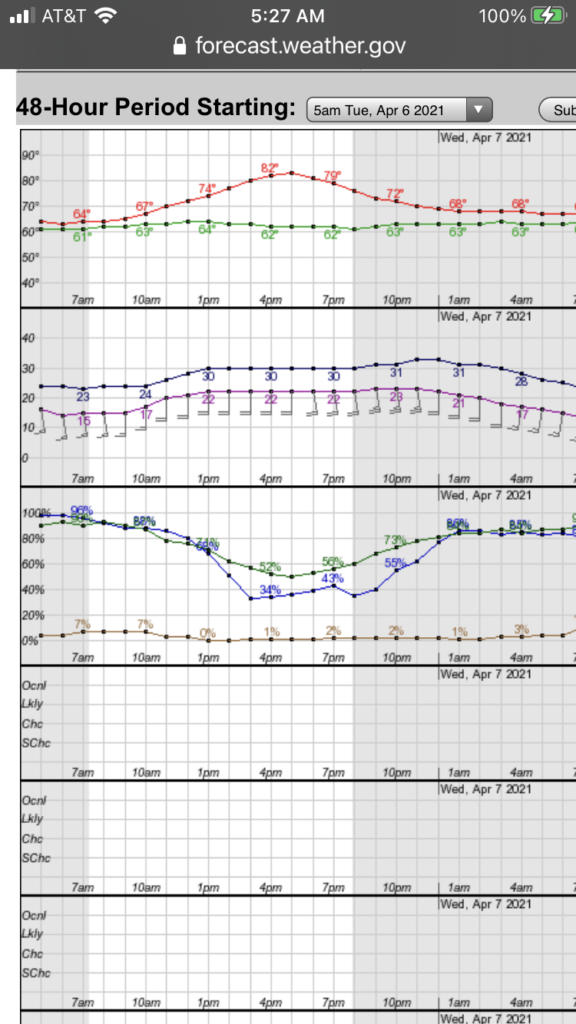