WHO I FISHED WITH:   This past Thursday, April 29th, I fished with Mr. Eddie Dunn of Troup, TX, and his long-time friend and fellow teacher, coach, and school administrator, Joe Oliver.

Back when we first put this trip on the books, we’d hoped to target hybrid, but the hybrid fishing has been dismal thus far this 2021 season, hence, I explained all of our options and our chances of success accompanying those options, and Eddie and Joe decided they would like to chase high numbers of white bass instead, agreeing that the time on the water was as much about fellowship as it was about fish-catching. 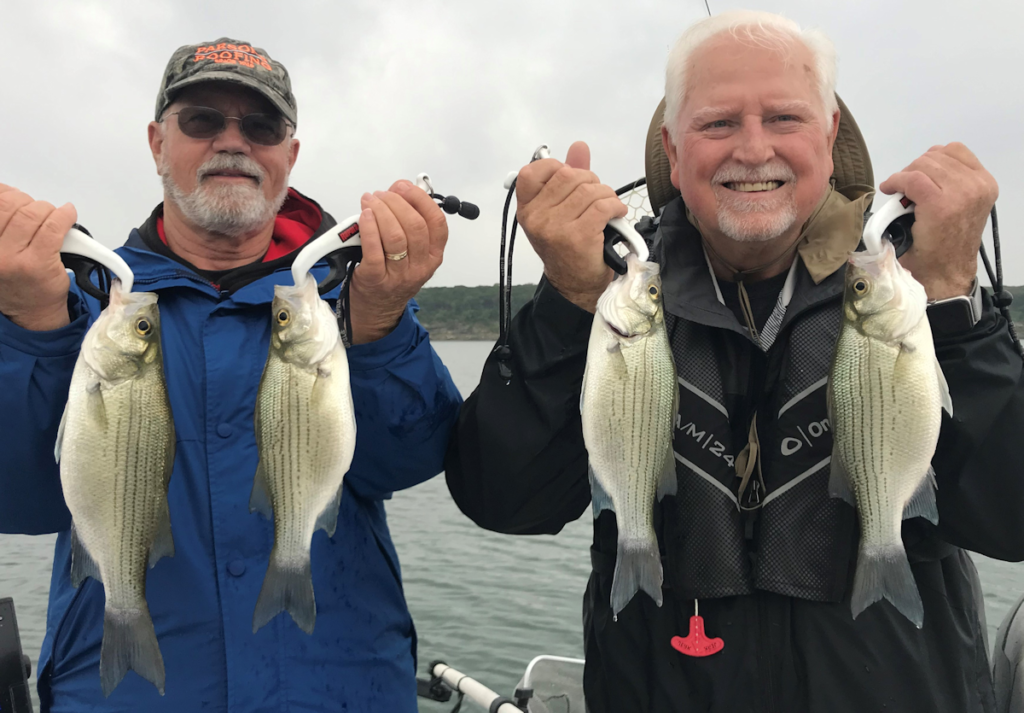 PHOTO CAPTION:   From left, Joe Oliver and Eddie Dunn with a few of the 64 fish we took on MAL Lures in the opening 2 hours of our trip, before retooling and dropping live baits down in hopes of luring hybrid striped bass.  They went on to land a total of 77 fish in conditions made tough by a wet cold front moving in.

The big story today was the weather story last night.  Starting around 8pm last night, the lead edge of a storm cell moved into Central Texas from the west and cleared out around 4am.  The storm dropped rain area wide and was accompanied by sporadic bouts of violent weather (high winds, hail, tornado warnings, etc.).  Additionally, a mild, wet cold front also advanced into the region causing a wind shift.  This definitely impacted the steady feed of grey clouds and southerly breezes we’ve enjoyed of late, and put the fish off a bit.

The fish were still plentiful and still fed pretty readily, but the numbers of fish seen rising into the water column, and the speed and aggression level they demonstrated were both much reduced versus the past few days with their ideal spring weather conditions.

When I arrived at Lake Belton pre-dawn, the lake was calm, and the skies were grey with thin cloud cover (with indirect moonlight from the near-full moon showing through).  I was reassured that we’d be able to catch fish despite the abrupt change in weather when I witnessed abundant spawning shad this morning at Area SHAD029.

When Eddie and Joe arrived, I went over the correct use of the MAL Lure and we set off to find and catch fish.  By 9:45 they had boated 64 fish (all white bass in the 1, 2, and 3-year class) and we could have kept right on going, however, I offered that we could change things up a bit by running live baits down on tight lines in an attempt to catch some hybrid striped bass.

By now, a light easterly wind was developing and a very fine mist had begun to fall.

We put another 1.75 hours of effort into it, fishing 4 distinct areas.  We found results much the same at the first three in that the out-sized threadfin shad I had hand-culled were attacked by 3- and 4-year class white bass before anything else had a chance to come near.  Once sonar indicated that the whites had saturated the area, we moved on.  We wound up catching 13 more fish, including 12 white bass and 1 smallmouth bass.  We had one pulldown by a hybrid, but didn’t connect with it.

OBSERVATIONS: I was pleasantly surprised to see shad spawning in the morning calm just before (obscured) sunrise this morning despite the turbulent overnight weather; this is atypical.

Wind Speed & Direction: Calm for first 30 minutes, then ENE under 6 for balance of trip 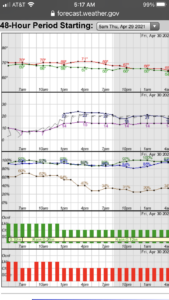