WHO I FISHED WITH: This past Thursday evening, April 29th, I conducted the second SKIFF trip of the 2021 season.

On this SKIFF adventure, I welcomed aboard Mrs. Ashley Patton and her two daughters, Willow and Athena Tripp.

Patton is herself a veteran, having served as a U.S. Army combat medic.  She and Tripp met while on active duty.

Patton heard of the SKIFF program through a posting on the Fort Hood Area Events Facebook page. 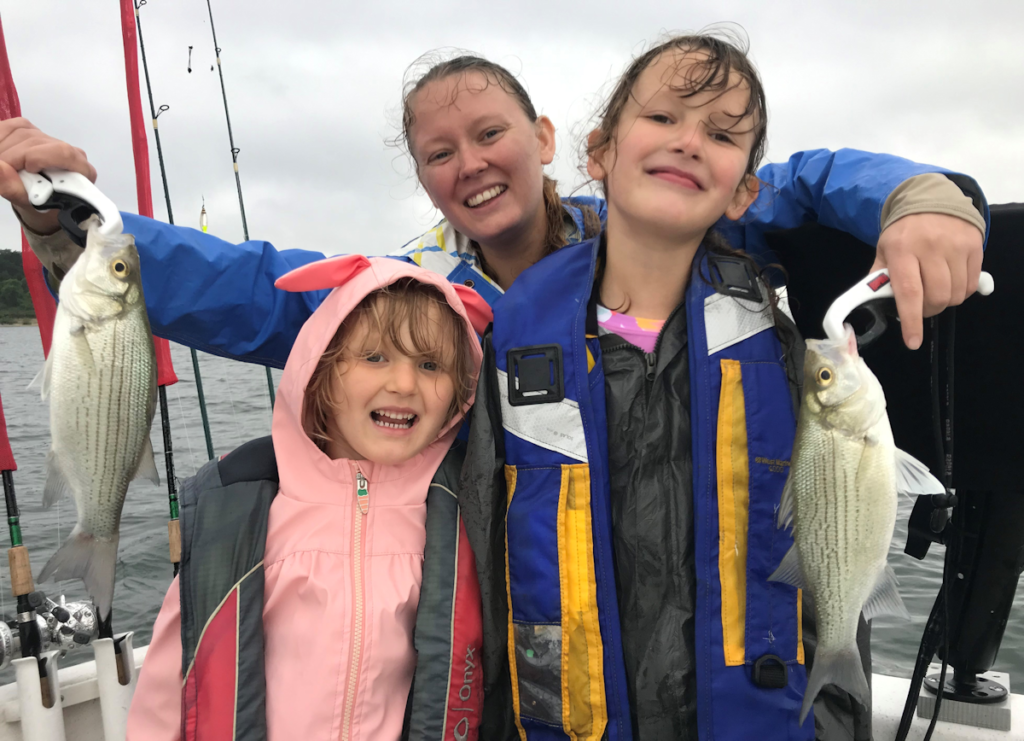 PHOTO CAPTION:   From left: Athena Tripp, Ashley Patton, and Willow Tripp with a few of the 38 white bass the girls landed from over 30 feet of water using MAL Lures as a wet cold front moved into Central Texas on Thursday afternoon. 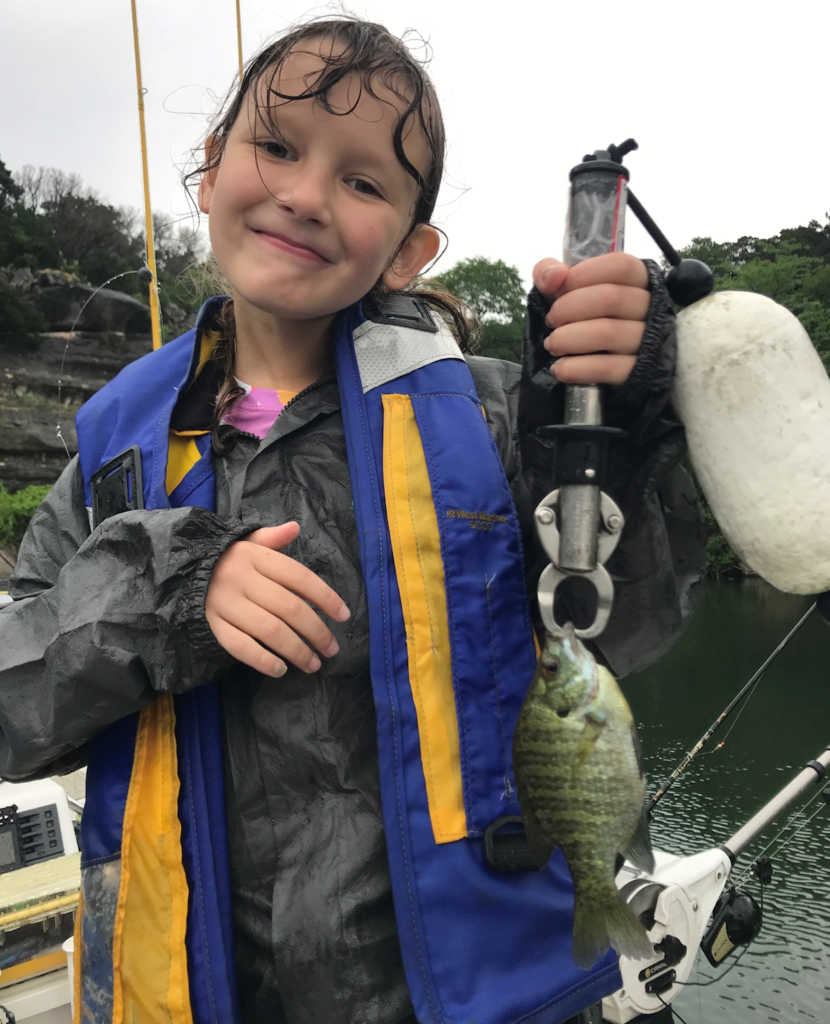 PHOTO CAPTION:  We started off simply by fishing with pole and float for sunfish at the trip’s start, and got more technical as the afternoon moved along.  Here is Willow Tripp with her largest bluegill sunfish. 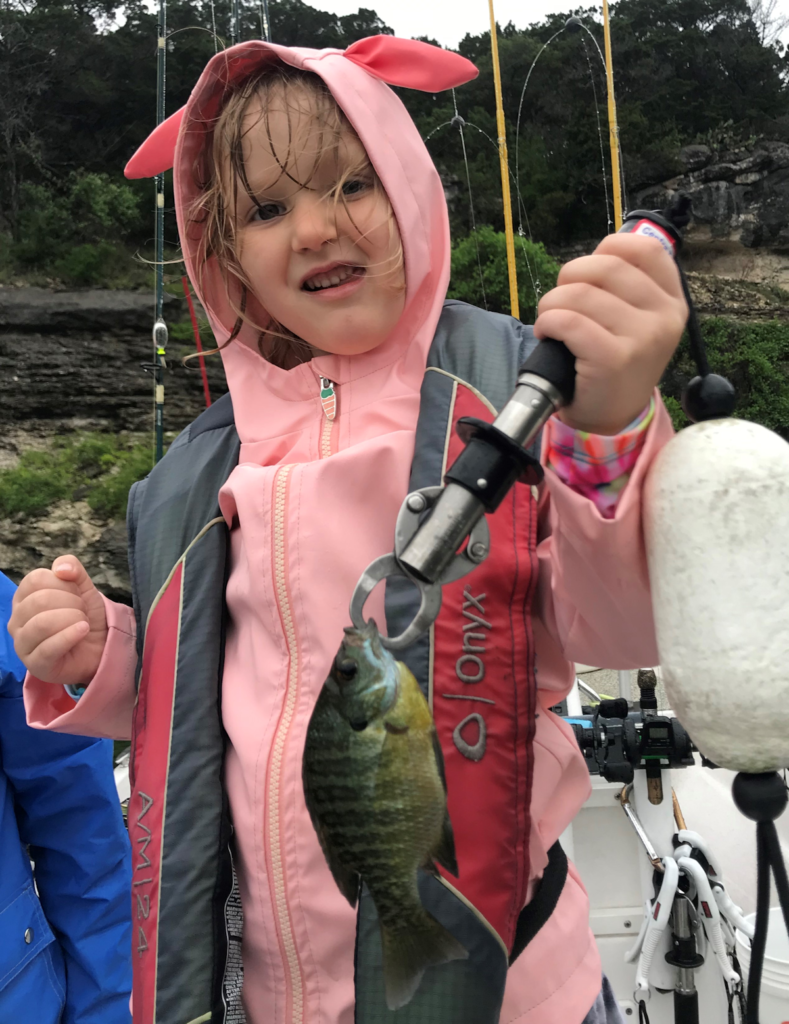 PHOTO CAPTION:  Athena Tripp didn’t let a little cool drizzle ruin her after-school fishing trip.  This was one of the first sunfish she landed from shallow water.

As a mild, wet cold front made its way into Central Texas, Patton arrived at Lake Belton around 4:30 p.m. after picking her girls up from school.

As the primary guide for the SKIFF program, I was present to welcome the family, provide them with a safety briefing, adjust the equipment to the girls’ statures, and help them be successful.

We began the trip fishing for sunfish with poles to which fixed lengths of fishing line were attached.  We targeted small fish in shallow water with this simple approach, and then layered in more complexity as the trip continued on.

By the end of the girls’ afternoon on the water, they were reading sonar, using custom-made MAL Lures to fish vertically for white bass in water well over thirty feet deep, and they did an amazing job at luring, hooking, and landing fish after fish.

We fished only two areas for this entire time.  Thanks to the incoming cold front, and despite the uncomfortable conditions above the water line, the fish really turned on as the winds shifted to the north and began to pick up speed.  The white bass we encountered stayed up well into the lower half of the water column the entire time we fished for them in about 32 feet of water.

As is often the case as we watch the fish we are fishing for on Garmin LiveScope, those fish highest in the water column tended to be the most eager to chased down and bite the MAL Lure.

Wind Speed & Direction: Calm for first 30 minutes, then ENE under 6 for balance of trip 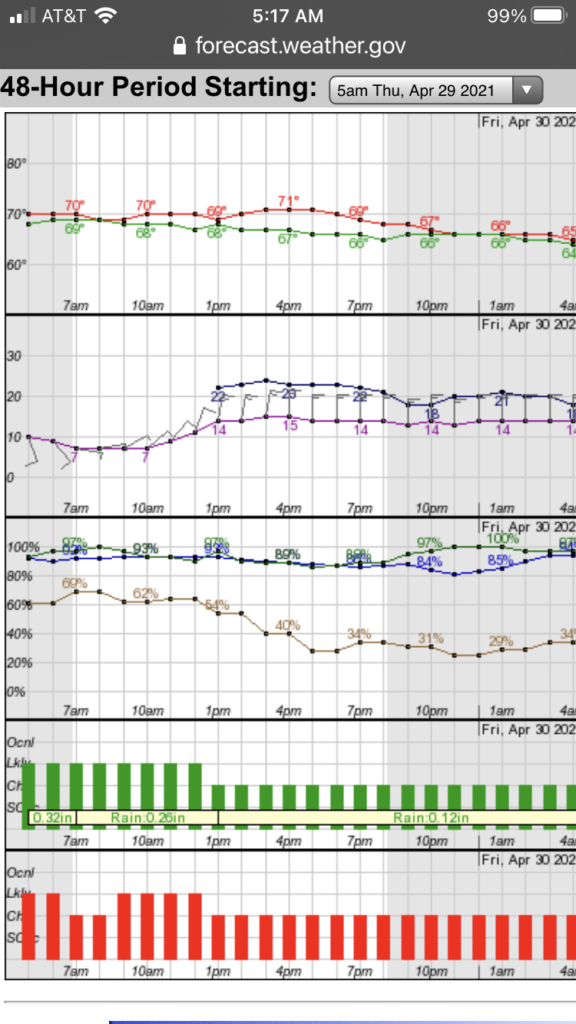