WHO I FISHED WITH: This past Thursday morning, June 3rd, I fished with Cliff Brown, former owner of Texas Boat World, his son-in-law, Cory Gates, and three of Cliff’s grandkids, including Isaiah Brooks (age 14), Michael Edmondson (age 13), and Caleb Gates (age 6).

Cory is on active duty with the U.S. Army where he just commissioned as a second lieutenant in the Chemical Corps after going through the “Green to Gold” program wherein enlisted personnel can earn a commission as an officer.

Here’s the ironic part: Cory had never caught a fish before in his life.  The first fish he landed today was a white bass.  Yet, Cory grew up in Carthage, TX, which is world-renowned for its Sabine River white bass fishery with tens of thousands of quality white bass coming up out of Toledo Bend Reservoir and passing right near his hometown every spring.  Hey, better late than never!! 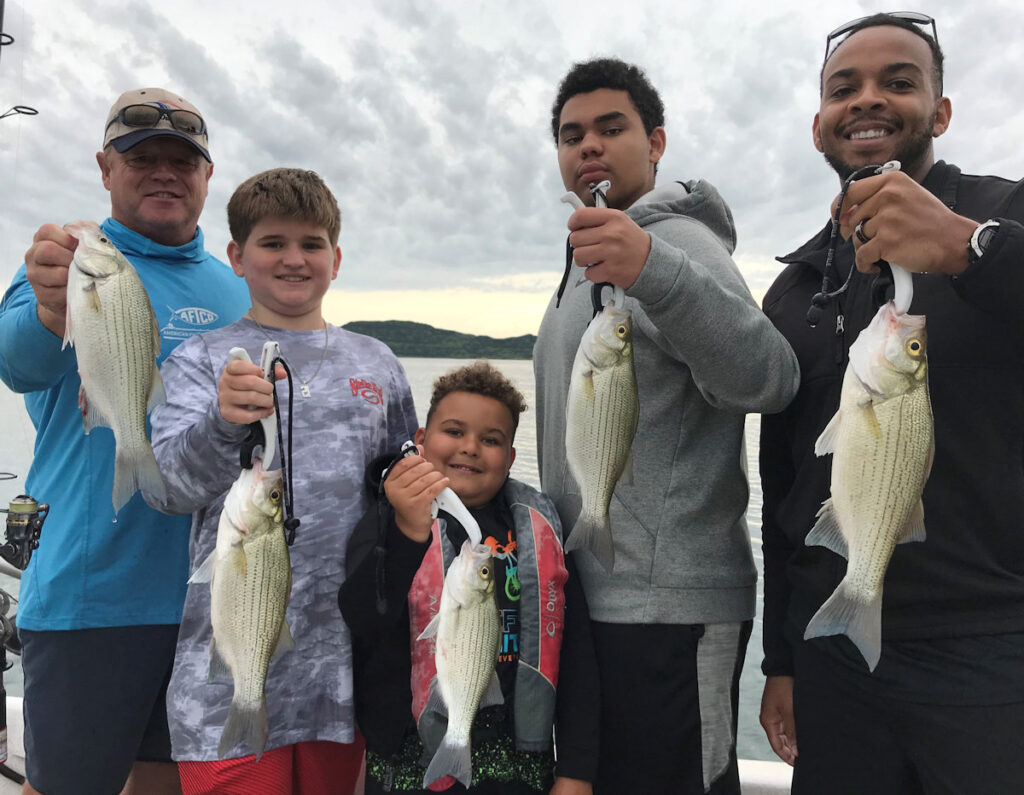 The weather was a bit more turbulent this morning than it was the past two mornings on Stillhouse, and, as a result, the fish were a bit more tentative.

We had rain-free conditions with heavy grey cloud cover and light winds right up until 10:40AM when nearby thunder and lighting drove us off the water about 10 minutes earlier than we would have otherwise departed.

Fishing was pretty straightforward once again this morning with fish found in 30-40 feet of water and  throughout the lower third of the water column with most fish originally found on bottom, then rising up off bottom as we created commotion and stirred their interest.

We fished four areas successfully this morning, with 100% of our fish accounted for on the white MAL Heavy lure fished vertically and in conjunction with Garmin LiveScope.

Although the water temperature is solidly in the mid-seventies now and although we had fairly light winds and solid grey cloud cover, I could not see any surface activity which led us to catch fish this morning, although that time is, no doubt, drawing near.  Perhaps the overnight low of 63F was the cause.

We finished up this morning with exactly 118 fish caught and released in just under 4 hours of effort.

OBSERVATIONS:   No topwater action observed, despite conditions which typically produce it.