WHO I FISHED WITH:  On Tuesday morning, September 21st, I fished with brothers-in-law Stacey Meeks and Robert Anderson both from here in Central Texas.

Stacey, who operates his own small business as a welder, coordinated the trip and let me know in advance that he would arrive with a hundred questions as he tries to sharpen his own skills at finding and catching white bass.  Robert is an internal medicine physician at one of our local hospitals. 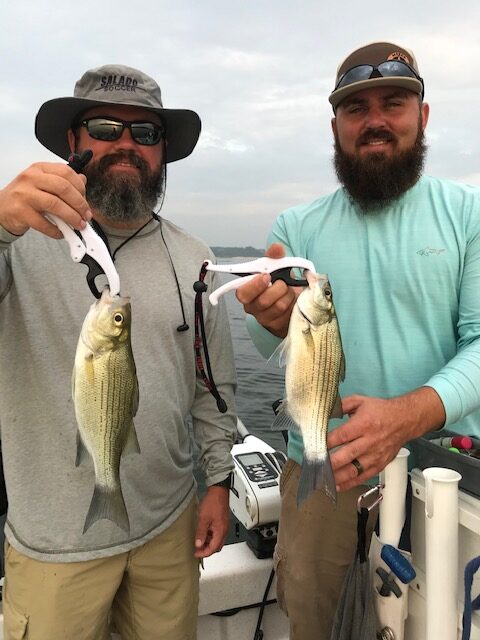 PHOTO CAPTION:   From left: Robert Anderson and Stacey Meeks with a pair of white bass we took under low-light conditions around sunrise using the MAL Heavy Lure with white blade and chartreuse tail.

The big unknown this morning as we started out was whether or not the incoming cold front would cause a wind shift while we were on the water, thus allowing us to take advantage of some pre-frontal activity as this first significant cold front of the season moved in.

As it turned out, the front arrived later than initially forecast, and the only help we got from the atmospheric scenario came as the north wind just began to ripple the water around 11am.

After finding fish on side-imaging, I positioned us cross-wind from them and we cast MAL Heavy Lures with white blades and chartreuse tails using a sawtooth retrieve.  We landed 15 fish in short order before the light level increased and drove the fish deeper.

Because Stacey expressed an interest in downrigging, we next pursued these fish as they moved deeper with 3-armed umbrella rigs equipped with Pet Spoons, landing just two and deciding to move on to greener pastures.

By now, the wind from the SSE had subsided and went light and variable.  After a short spell of calm winds, a ripple developed and as it did so, we noted two schools of whites driving shad to the surface, about a hundred yards apart from one another.  The action didn’t last long, but we were able to both take fish from these schools, and work the area over for a few more fish after they sounded.  The winds went calm again and the action here died.

We checked a slow-tapering area out and sonar lit up with bait and small schools of suspended white bass over a roughly 2-acre area.   I suspected these might be small, and, as we ran the downriggers once again to quickly cover water, these suspicions were confirmed.  We put 6 shorts in the boat very quickly and, with the wind now blowing again, returned to the previous area, this time fishing it vertically and more thoroughly.

There were fish present, but they were definitely not enthusiastic.  We added three fish to our count and had to move on.   Our tally now stood at 31 fish and the time was 10:40.

After making sure the fellows were both okay with extending the trip a bit to allow us time to look over a few more areas, we covered water until two distant, simultaneous bursts of water spray caught my eye.  I took us off plane and just watched and continued to see additional bursts of spray.  I felt this was likely either white bass, largemouth bass, or both, so, we closed in to investigate.

We found yet another roughly 2-acre patch of water with multiple surface-oriented schools of white bass present from bottom in 36 feet of water up to about 28 feet of water, and with the fish spread throughout the water column.  We used MAL Heavy Lures with silver blades and white tails (with the sun now shining) to catch white bass by sight-casting, by working these lures vertically when Garmin LiveScope showed fish beneath us, and by working these lures with a sawtooth method when the fish were not visible on the surface nor on LiveScope.  In the 55 minutes that followed, we more than doubled our catch of 31 to a final tally of 64 fish.

Wind Speed & Direction: SE4-5 for the first hour, light and variable for the middle 3 hours, then NNW3-4 from 11A to Noon

Sky Condition: Skies were mostly cloudy and grey at 60-80% with some fine precipitation for just a few minutes falling around 9:30A.  As the wind shifted to the NNW, the skies cleared and the sun shone intensely. 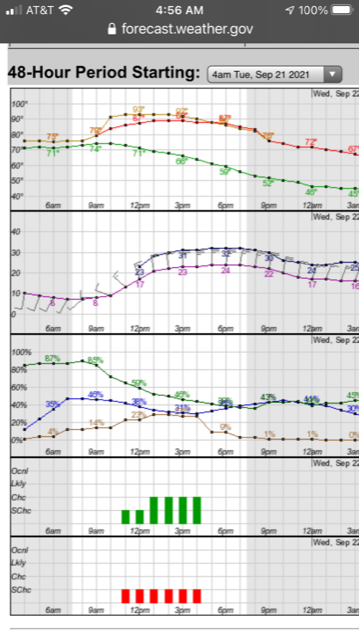