WHO I FISHED WITH:  This morning, Monday, September 27, I fished on Lake Belton with returning guest Gary Jones.

Gary came out with me once before with three buddies in the late spring after being the high bidder on a fishing gift certificate I’d presented to the Ralph Wilson Youth Club for a fundraiser.

Gary appreciated the intentionality with which I’d designed my guide boat after seeing it and fishing from it that first time, and, as a result, ordered a similar boat.  So, in many ways, this was a ‘dry run’ for Gary, nailing down how to use the boat, sonar, and other accessories to pursue freshwater pelagics.

I appreciate clients who come ready to learn and who are willingly coached — Gary is one of those fellows. 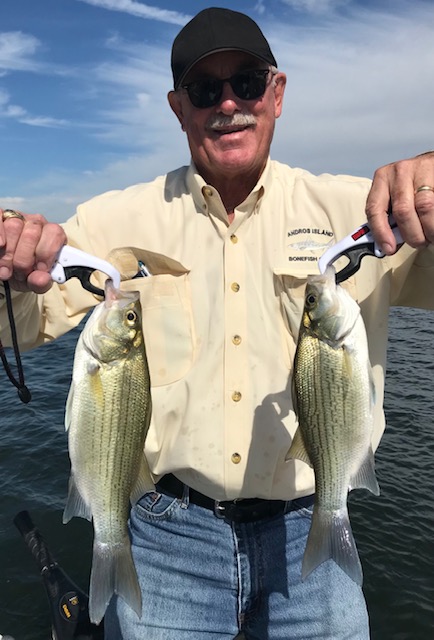 PHOTO CAPTION:   Gary Jones with a couple of the 139 fish we boated this morning from the surface all the way down to 42 feet deep.

We caught fish from shallow to deep, and from top to bottom this morning.  That short, intense cold front’s passage last week really has spurred a grand, positive change in the fishing.  The surface temperature was below 80F for the first time since the spring today, and the fish are moving into deep water areas they have not occupied for months.

We started our morning looking and listening for fish popping shad on topwater and caught 4 by sight-casting MAL Originals with silver blades/chartreuse tails.  We then used side-imaging to find fish in under 25 feet of water as they moved deeper with the brightening sky.  We chose to cast off the port or starboard side based on the look of side-imaging, and scored regularly from a fixed position by holding into the wind with Spot-Lock.  We used MAL Heavy Lures with white blades and chartreuse tails for this work.  We landed 13 more fish in this manner.

As the schools of white bass pressed deeper with the increasing light level, they eventually scattered sufficiently to make me think downrigging would be the better option, and, given that Gary had never downrigged, but planned to do so with his new boat, I used this as an opportunity to show him the ropes.  He got the hang of things after just a few iterations, and we routinely landed all singles today on the 3-armed umbrella rig equipped with Pet Spoons. We took an additional 12 fish on the ‘riggers.

By about 8:50 AM, these fish played out and, despite precisely presenting downrigged baits to the bottom-hugging schools of white bass we could see on sonar, they no longer took chase and bit.  We moved on to greener pastures.

As I searched with sonar over some open water areas, we spotted some topwater commotion about 200 yards away.  I shared with Gary that at this time of the morning, the topwater action is typically just the tip of the iceberg, with the real story playing out well beneath the surface.  This was the case in this situation.  As we slipped over top of where the topwater action had briefly occurred, there were white bass and hybrid striped bass all throughout the lower 2/3rds of the water column.  We stopped, got the Garmin LiveScope gear focused on the fish, and then worked MAL Heavy Lures with silver blades/white tails vertically for an easy dozen fish, including two 4-pound class hybrid, before this wandering school of fish moved on.  Our tally now stood at 41 fish.

It was now just shy of 9:30 AM.  We continued searching out fish and bait in the 40-foot range.  The next school of fish we found on sonar would keep both of us busy full-time for the next 90 minutes to come.

Once again, we geared up with MAL Heavy Lures with silver blades/white tails for the vertical work we were about to do, assisted by Garmin LiveScope.  From the time we first dropped our baits to the final time we reeled up to head back in, there was never fewer than three dozen fish on the screen with, literally, hundreds of fish appearing at times, all heavily congregated and moving with a purpose pursuing the shad also found in the area — just incredible.  We landed another 98 fish here before Gary threw in the towel at around 11:10AM.

OBSERVATIONS:  Since last week’s cold front, the season’s first coots have migrated down; I also spotted a pair of bald eagles, multiple large flocks of teal, and multiple osprey.

Sky Condition: Skies were under ~55% white cloud cover on a blue sky