WHO I FISHED WITH:  This morning, Monday, 08 Nov., I fished with returning guests Frank and Marcos Sumner.

Frank is a retired U.S. Army veteran living in Killeen where he now serves active duty soldiers on Fort Hood by helping improve their eyesight by providing various medical procedures, just as he did while on active duty.

Marcos, his wife, and their young daughter live down in San Antonio where he works on the operations side of the banking business.

Fog was a major issue to contend with this morning.  NOAA’s forecast completely missed it, and my backup, KWTX, didn’t figure it out until I was already on the water.  Here’s how things unfolded… 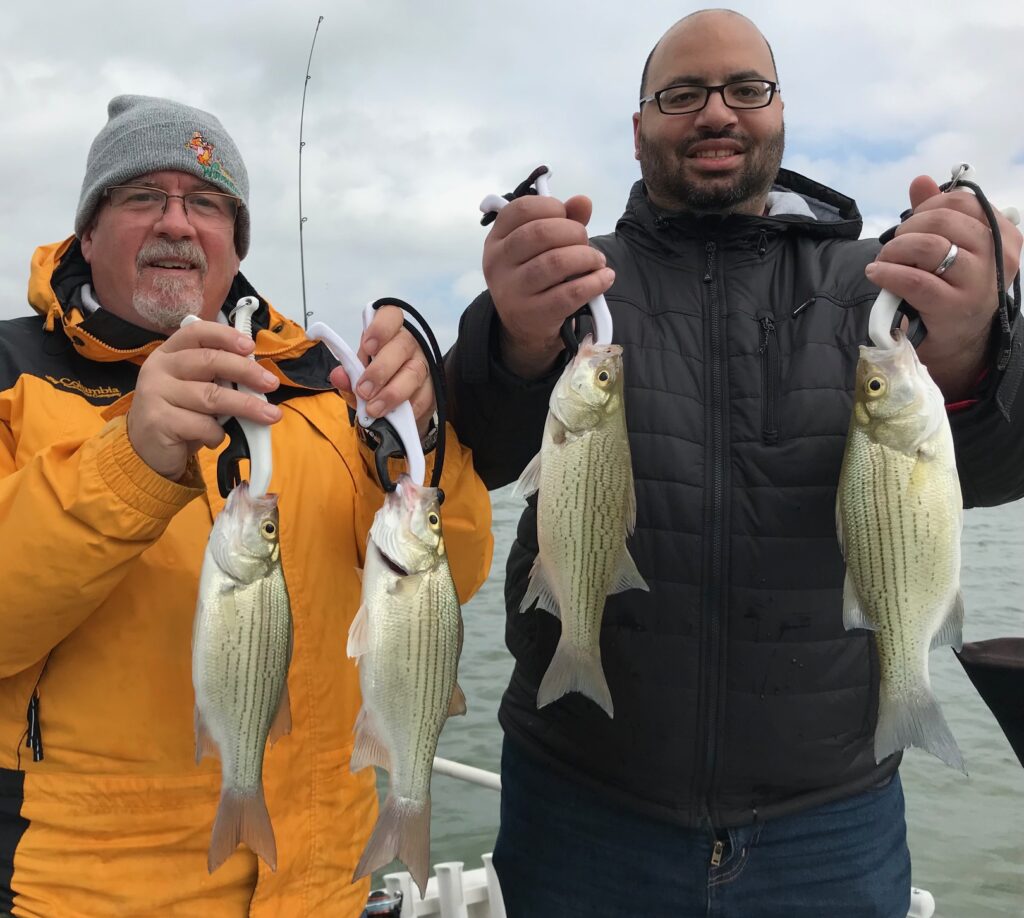 PHOTO CAPTION:  From left: Frank and Marcos Sumner put together a 116 fish morning on Belton Lake despite being hindered by thick fog for over half of the morning.  MAL Heavy Lures with white tails and silver blades did the trick.

The fog set in right around 6:20A as I was getting launched and prepared to receive Frank and Marcos.  After going over all of the pre-fishing admin, we launched into the fog, which kept us going a maximum of ~10 mph for safety’s sake.  With limited light coming through the fog, I searched for fish as shallow as I could find them, and connected with a few white bass (6 total) on a slow-tapering bottom in 22′.  We used MAL Heavy Lures (white tail/silver blade) worked vertically in conjunction with Garmin LiveScope to take as many as we could before they moved on (which, in shallow water, they are much more likely to do than when bunched up more tightly in deeper water).

After this initial bit of success, we continued looking at promising bottoms with similar depths, but found little shad and no white bass.  I then moved out a bit more to near 30′ and still found little.

Our next spot of luck came when, to my surprise, we happened upon a small flock of gulls working low and tight to the surface over top of white bass pushing some shad to the surface.  This didn’t last long and the action wasn’t what you’d normally expect when birds are working, but, we added 10 fish to our tally going both vertical (first), then horizontal (when LiveScope indicated fish to our starboard).

Next came a bit of a dry spell.  As the fog thinned, it did so from the lake level, upwards, so, even though some of the shoreline became visible, very little light was coming through as the fog hovered yards above us.  The entire time this was taking place (about 35 minutes), I saw no promising sonar readings after looking over 5 typically productive areas.

I returned to the same vicinity where I’d found those birds in the fog earlier and we found fish in a neutral posture in about 28′.  We fished hard and began pulling fish.  Although we’d witness 20-30 disinterested fish for every one we caught, we kept at it and began putting together a catch.  By the time these fish turned off, we’d added 32 more fish to our tally, which now sat at 48 fish.  It was now already 10:20 and we’d been at it for just shy of 4 hour by this time.

I moved to look at two areas, both more steeply sloped and nearer the channel than the areas we’d been on.   The first had shad, but not fish — lots of shad.  This encouraged me to look at yet another similar area, as the amount of shad I saw was like nothing I’d seen up shallower all morning.

As we pulled up on what would be our final area fished, sonar lit up.  Shad were present and tightly balled up — hence, I knew something was chasing them.  A few yards further (and a bit deeper), the fish showed up.  They were about 6 feet thick off the bottom!

We literally doubled our catch and then some in the next 25 minutes which followed, taking our tally from 48 fish up to 116 fish.  Every last one of these was taken vertically on the MAL Heavy Lure with white tail/silver blade.  Up until this time, we’d landed 2 short hybrid in our catch of 48.  Mixed in with this batch of white bass were another 7 short hybrid.  I’ll mention here again that the 2023 hybrid season appears to be in good shape!

By 11:10 the action died to a crawl and we decided to call it good at that time.  Better to start slow and end well, I suppose.

In our catch of 116 fish we had 2 largemouth bass, 1 freshwater drum, 9 short hybrid stripers, and 104 white bass.

OBSERVATIONS: 1) Fog made things tough for our first 2.5 hours. 2) Slowly but surely our winter population of gulls is increasing on Belton. 3) The wind shift on our next cold front is currently forecast for ~2A Thursday morning, 11 Nov.

Wind Speed & Direction:  SSE7 under fog, increasing to SSE12 after it lifted 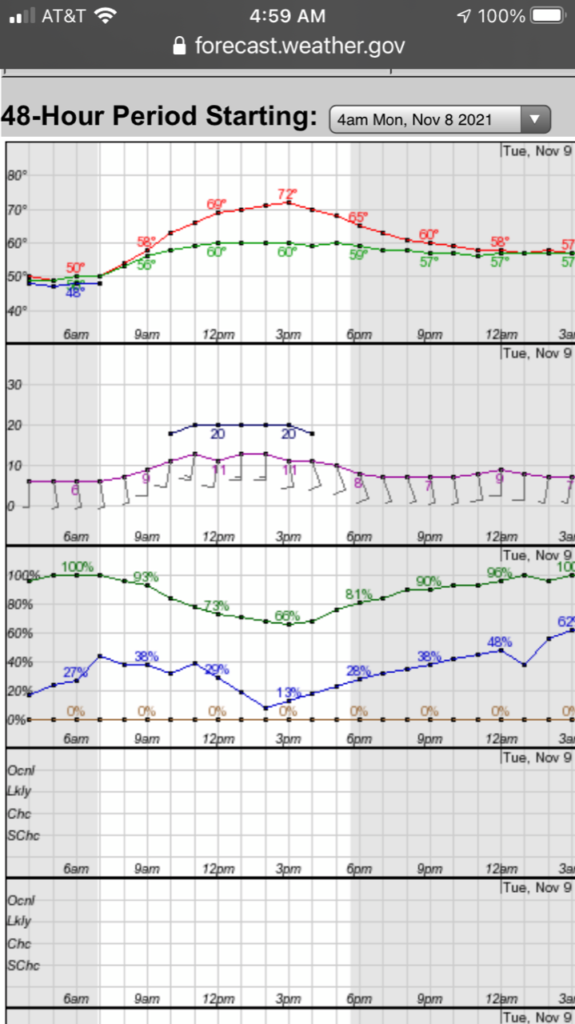