WHO I FISHED WITH:  This morning, Tuesday, 16 November, I fished with returning guests Mike McLaughlin, his son-in-law, Keith Duncan, and Keith’s 15-year-old son, Alex Duncan.

It’s become somewhat of a tradition for Mike’s wife to give him a fishing gift certificate for Christmas, and, the three fellows know that the combination of low fishing pressure, mild temperatures, and excellent fishing in October thru early December make that an excellent time to cash those certificates in.  Today was no exception. 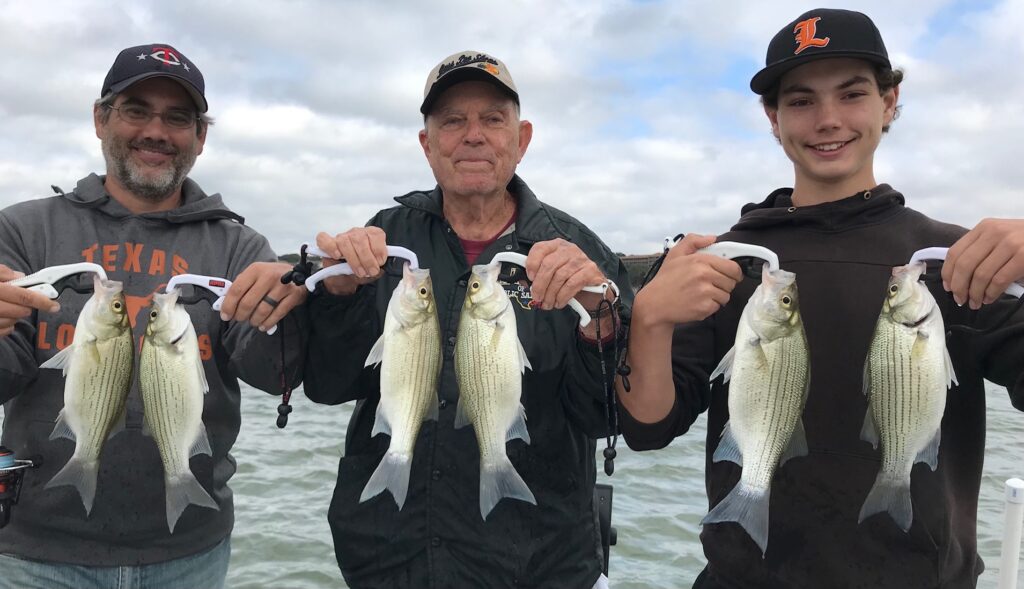 PHOTO CAPTION:  From left:  Keith Duncan, Mike McLaughlin, and Alex Duncan with part of our 154 fish haul.  All caught and released. 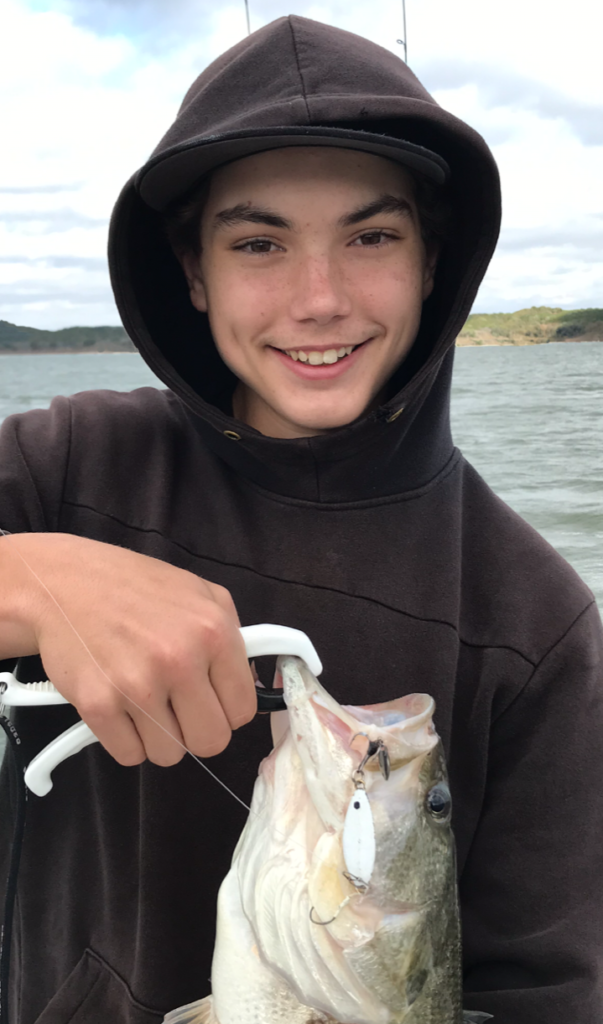 PHOTO CAPTON: I’ve begun to experience a bycatch of largemouth bass mixed in with the white bass I am pursuing.  Three black bass turned up deep today on the 3/4 oz. Bladed Hazy Eye Slab – a very, very close imitation of an adult threadfin shad in size, color, and profile.

Once again we enjoyed the company of a southerly wind, this time accompanied by nice, grey cloud cover just thin enough to make you squint, but not thin enough to let it heat up too much.

We caught fish well from start to finish this morning while fishing 5 distinct areas.

Once again birds led the way to our first successful stop this morning, giving up an even three dozen fish (and our best average sized fish of the five locations we fished).  The birds were hard after shad being driven to the surface by smaller white bass patrolling 6-10 feet beneath the surface, and we found better fish closer to the bottom as we cast our MAL Heavy Lures (white blade, chartreuse tail) horizontally in 18-24 feet of water.  If, at the end of a retrieve and before casting again, we saw fish on Garmin LiveScope, we’d let down for them and fish the same rod/bait vertically, but the majority of these fish came on the sawtooth retrieve.

Our next success came on a small, 26-foot deep flat adjacent to the channel.  We landed 17 fish here before the fish shut down pretty abruptly (as they do sometimes when a large predator, like a jumbo blue cat or large gar, moves in).  These fish were all taken vertically, as were the remainder of our fish from this point to the end of the trip.

Our third stop yielded 47 fish.  These fish were on a gently sloping bottom, again, near the channel.  During the time we fished for these fish, we had surface action constantly occurring on the channel-side of the boat, but no birds present.  This was 100% vertical.

Our fourth stop produced only small fish, so, as soon as the action waned (which wasn’t long after we arrived), we departed after boating only 7 fish.

Our final stop produced best and was at the time of the greatest leap in wind speed.  On yet another gently sloping bottom near the channel we encountered bottom-hugging fish on sonar, Spot-Locked on them and began catching them easily on a vertical tactic with the MAL Heavy Lure.  After about 25 minutes of catching, the fish began to slow down.  They’d chase the MAL half-heartedly, but then headed back to bottom after traveling only 3-4 feet upward.  Having seen this last week in the lull between fronts, we rearmed with long spinning rods rigged with my 3/4 oz. Bladed Hazy Eye Slabs (in white), and, thank to the slower speed at which the small spinner on this lure turns, worked these slowly and effectively by bringing them slowly and steadily upwards off bottom while observing Garmin LiveScope for a response.  We added a final 46 fish to our count at this last stop, with a 50/50 split between the MAL Heavy and the Bladed Hazy Eye Slab.

This area gave up a bycatch of 3 largemouth bass.

When all was said and done, we landed 154 fish, including 3 largemouth bass, 8 juvenile hybrid striped bass, 1 freshwater drum, and 142 white bass.

OBSERVATIONS: 1) As is typical for this time of year, the largemouth bass bycatch has begun to take place.  We took 3 largemouth today. 2) Next front is due in in the early morning hours of Thursday, 18 Nov.

Wind Speed & Direction:  SSE9 at trip’s start increasing steadily to SSE13 by the 3 hour mark, then quickly going SSE17 in our final hour 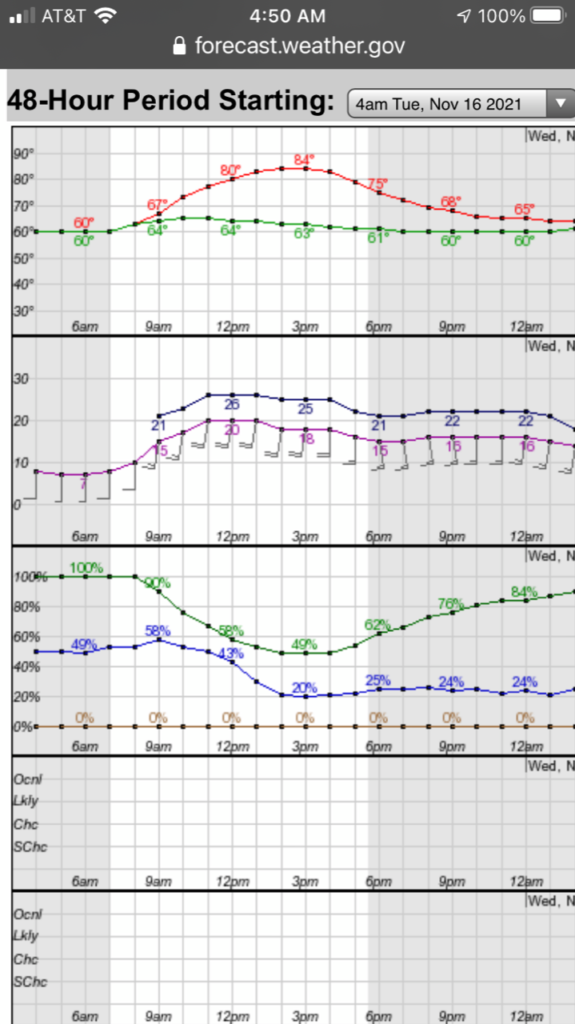