WHO I FISHED WITH:  This morning, Monday, November 29th, I fished Lake Belton with returning guest Gary Jones of Temple.

Gary just took delivery on a new Boston Whaler center console and was therefore keen to ask a lot of questions, mainly in regards to the positioning of equipment, power distribution for electrical accessories, and batteries.

My next three openings will be on 22 & 23  December, and January 3rd.  Weekday mornings are always best.

PHOTO CAPTION: For the first time since turnover, the Bladed Hazy Eye Slab outperformed the MAL Lure.  This follows 4 straight days of cooling weather following the cold front which moved in on Thanksgiving Day.  Shown is the white, 3/8 oz. version of that bait.

After 4 straight days of northerly winds which first began on Thanksgiving Day, the winds changed direction this morning, first blowing out of the west for ~2 hours following sunrise, then going nearly slack for ~45 minutes, then beginning to blow out of the SSE, building quickly from a ripple to a 10-11 mph breeze, beginning around 10AM.

We enjoyed about 45 minutes of widespread bird action which allowed us a catch of 8 fish directly beneath the birds by casting to birds and/or fish boils, counting down the MAL Heavy anywhere from 6 to 8 seconds, then executing a plain-Jane, moderately paced retrieve straight back to the boat.  After the birds began to relax a bit, we found still-active fish which were now on bottom, and worked them with a vertical tactic, again, with the MAL Heavy Lure (white blade, chartreuse tail).  Due to the steady cooling of the water over this past 4 day stretch, and the diminishing activity level of the fish, I decided to give the Bladed Hazy Eye Slab (white, 3/8 oz.) a try.  I’ve been carrying these rods on the boat for over two weeks now and occasionally using them when the conditions and/or bite was tough.

The response was quite favorable; so much so that we stuck with the Bladed Hazy Eye Slabs for the remainder of the trip.  We are only ~3 degrees away from that temperature where the fish began turning off the the faster moving MAL Lure last December, so, it is no surprise that this change in preference is occurring.  The very small willow-leaf blade on the lure moves at a much slower upward speed that does the larger blade on the MAL Lure, so, I get the benefit of the blade’s flash, without having to impart the speed the MAL Lure demands.

Combining the “easing” tactic used with these slabs with Garmin LiveScope was a “can’t miss” proposition.

When all was said and done, we landed 67 fish, including 3 largemouth bass, 2 freshwater drum, and 62 white bass.

OBSERVATIONS: 1) We caught all of our fish in 20-28 feet of water; although bait can be found much deeper, I did not find any gamefish deeper than 28′.  2) This was the first time since turnover that the slab outproduced the MAL Lure.

Wind Speed & Direction:  W5 for 2 hours, then going slack, then changing to SSE and building to SSE10-11 by trip’s end 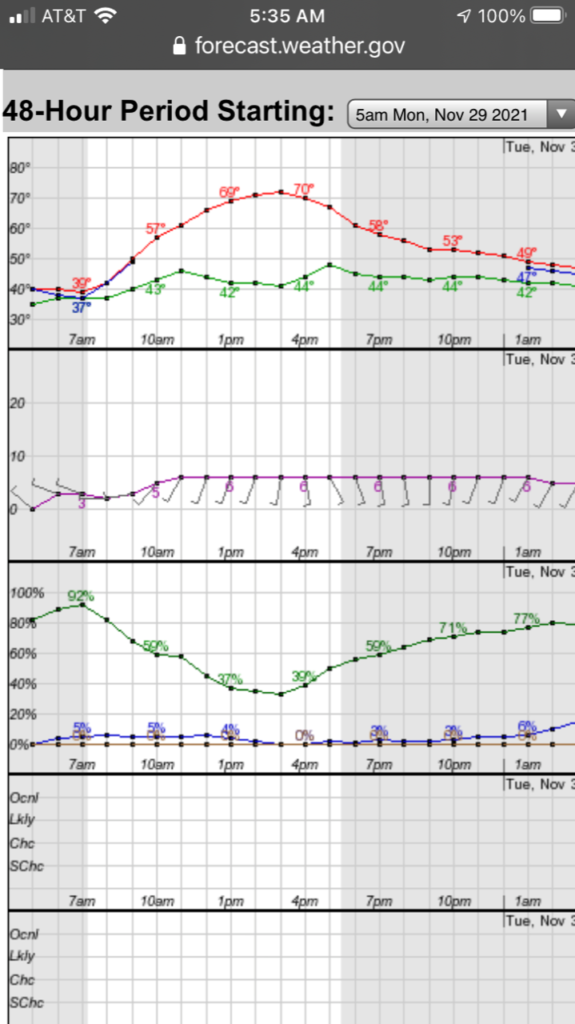 **Area B0123C – 18 fish caught on MAL Heavy with white blade, chartreuse tail under birds; sight casting for 8, then used vertically for another 10