WHO I FISHED WITH:  This past Friday morning, January 14th, I fished with a crew of four — two from the Austin area, and two who escaped winter’s grip up in Minnesota.

Joe Menk and Mike Lotta with PCI, a financing company, left cold winds and snow flurries behind at the Minneapolis Airport to meet with salesmen Frank and Jeff Gladding down in Austin.  When all the business was addressed, there was some time remaining to relax a bit out in our mid-70 degree afternoon on Lake Belton.

My next few openings will be on January 18th,19th, & 21st.  Weekday mornings are always best. 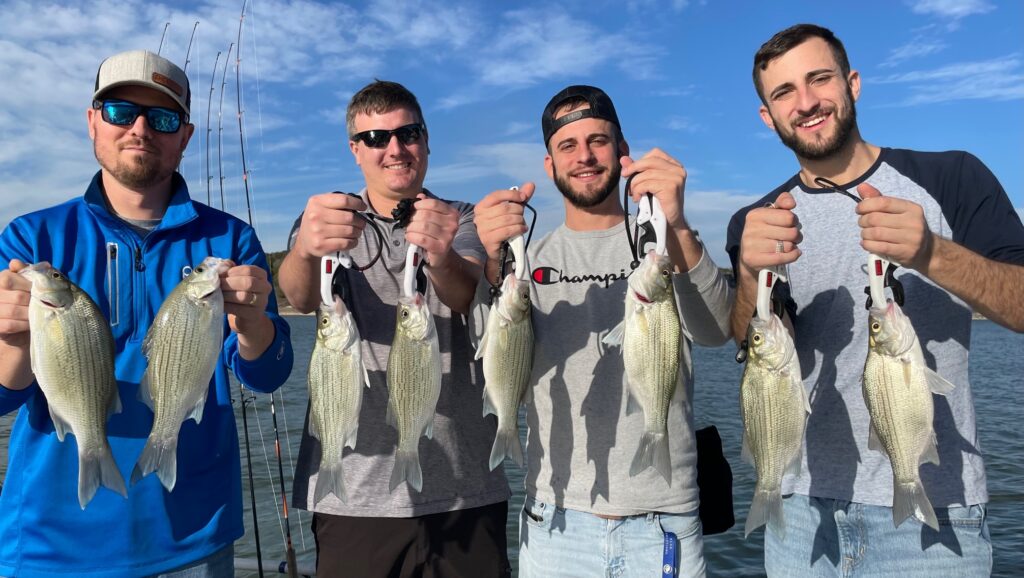 The various weather forecasts I watch were all abuzz about the strong cold front due in Saturday which was when this trip was originally scheduled for.  The high winds (gusts in the 40 mph range) would not allow for that trip to happen, so, I offered to bump this crew up to Friday afternoon, instead.  As I made that offer, I was hoping we’d get in on some of that “pre-frontal” fishing that takes place before strong fronts roll in, but, unfortunately, the timing on this one left those ideal conditions taking place under the cover of darkness late Friday night and into early Saturday morning, so, we fished under the “lull between fronts” kind of conditions instead.  Even so, it was nice to be outdoors without gloves or long underwear on!

We were able to find fish, but, when we did, the schools we found would give up a handful of fish before the school would lose interest and stop pursuing aggressively as they did when we first arrived and presented our slabs.  So, this meant we had to do two things: 1) move routinely, and 2) make use of “short hops” whenever side imaging revealed fish nearby to our left or right as we fished from a Spot-Locked position.

In this way we were able to catch fish steadily up through about 4:45pm (with a 1:40pm start).  The last 45 minutes leading up to sunset was very tough as the winds lightened significantly and, although we found and sat over top of fish, they were loathe to pursue more than a foot or 18 inches off bottom.  We landed only 3 fish during this final portion of the trip.

OBSERVATIONS: No helpful bird activity during this afternoon trip, despite the presence of plenty of both gulls and terns.  We noted that the schools of fish we found this afternoon lost interest, but did not move; rather, they just became increasingly difficult to catch to the point of not budging off bottom no matter the speed of our retrieve (or lack thereof).