WHO I FISHED WITH:  This morning, Wednesday, June 22nd, I welcomed aboard Jason Martinez, accompanied by his daughters, Sophie (age 14), and Olivia (age 10).

This was a “Kids Fish, Too!” trip — a trip intended just for kids, which is less expensive and shorter in duration than my adult trips.  So, instead of fishing for his own fish, Jason’s role was to help me help the girls be successful.  He untangled lines, unhooked fish, set downriggers to depth, and more, all so we could maximize our catch for the girls while the fish were active.

My next openings will be on July 22nd and August 1st.  Weekday mornings are always best.  Saturdays are available for on-the-water sonar training sessions (only) until after Labor Day when I’ll again offer Saturday morning fishing trips (until mid-March 2023). 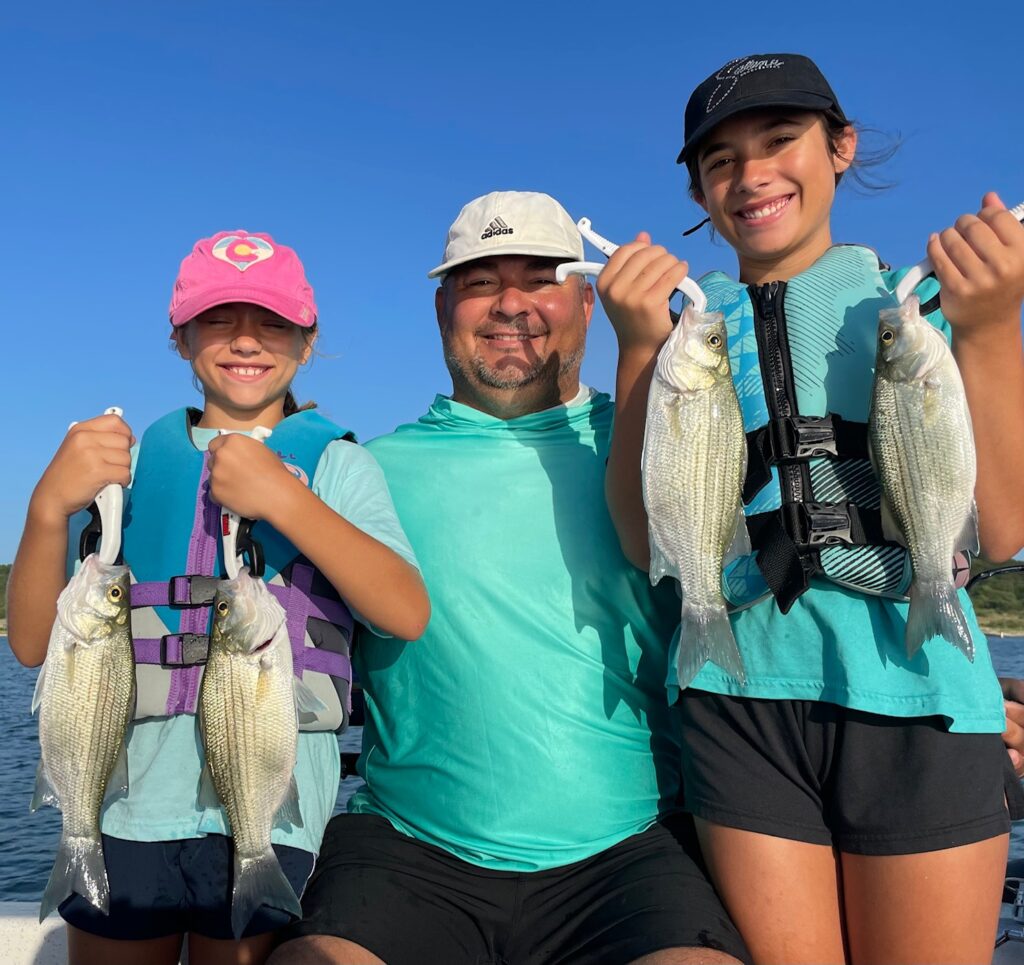 PHOTO CAPTION: From left:  Olivia, Jason, and Sophie Martinez with a few of the white bass Lake Belton gave up this morning on this “Kids Fish, Too!” trip just for the girls. 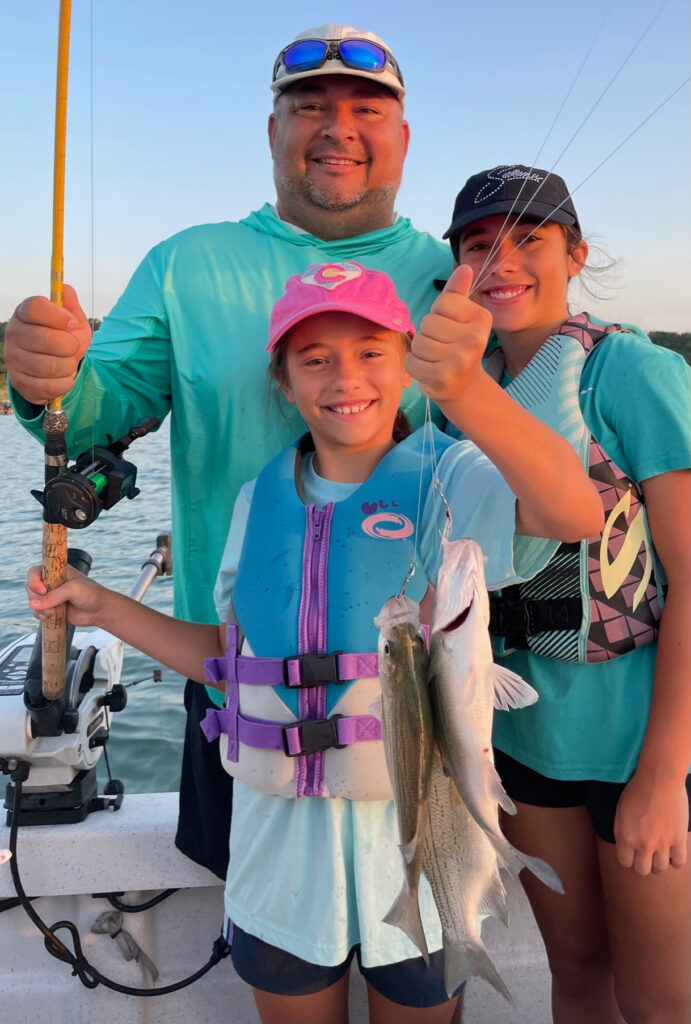 PHOTO CAPTION: 10-year-old Olivia started us off right this morning.  Our first contact with fish resulted in a triple — three fish at one time on a downrigged 3-armed umbrella rig equipped with Pet Spoons. 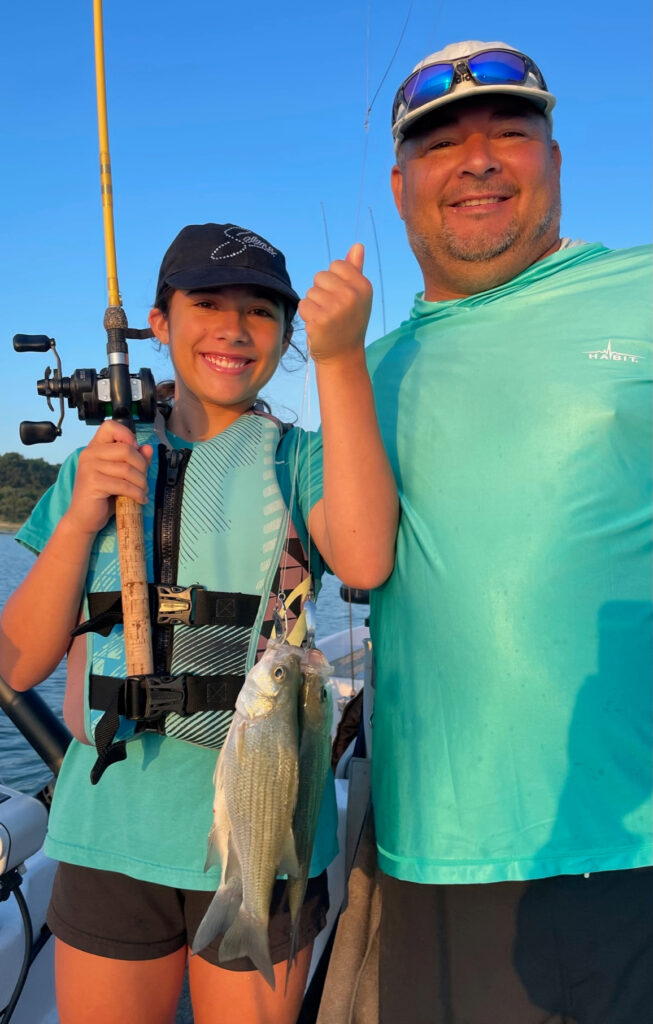 PHOTO CAPTION: Not to be outdone by her younger sister, Sophie came up with a triple of her own.  The girls would go on to land five sets of triples and even more numerous doubles as the white bass really cooperated today.

Despite any appreciable change in winds or weather, fishing today was just much simpler and more productive than the last two days have been.  We noted more topwater action (although it wasn’t through the roof), more fish in a feeding posture up off the bottom, and bait much more tightly bunched and up higher in the water column as they were being pursued by the white bass for three-plus hours straight this morning.

We began the day downrigging with twin ‘riggers deployed, each rigged with a 3-armed umbrella rig equipped with Pet Spoons to imitate the young-of-the-year shad.  We stuck with this for about 45 minutes until the sun’s increasing angle and intensity drove the fish down in the water column and out away from shore.  We’d already landed two dozen fish by now, and then added another dozen taken by smoking MAL Heavy Lures in just over thirty feet of water where we found a nice bunch (~60 fish as seen on sonar) piled up together.

When this dried up, we went hunting with sonar (primarily relying on side-imaging) to find congregations of fish large enough to hover atop of and fish vertically for.  We found one such school fairly quickly in about 34 feet of water and worked them for about a half hour, adding another 27 fish to our tally on the MAL Heavy Lures.

We again hunted fish, and again found fish on side-imaging, this time in 32 feet of water in a more wind-exposed location (which kept the girls cooler as the summer heat was pouring on).  We took another 12 fish on the MAL Heavies and then detected a weakening in the bite right around 9A.

By this time, both girls had worn out their wrists and were ready for the more relaxing approach of downrigging for one last round.   The fish really put on a show as we covered lots of ground, straining out the still-active fish from amongst an increasingly inactive population.  We took our final tally from 75 fish up to 101 fish in our final 30 minutes on the water, and still arrived back at the dock about 15 minutes early as the heat and action just about had the girls worn out.

Kudos to Jason for being a supportive, loving, present, encouraging, and (most importantly) godly dad to his daughters.  Our nation needs more of that!

OBSERVATIONS: Despite any appreciable change in winds or weather, fishing today was much more productive than were the previous 2 days.  We noted 1) more topwater action, 2) more fish in a feeding posture up off the bottom, and 3) bait much more tightly bunched and up higher in the water column. 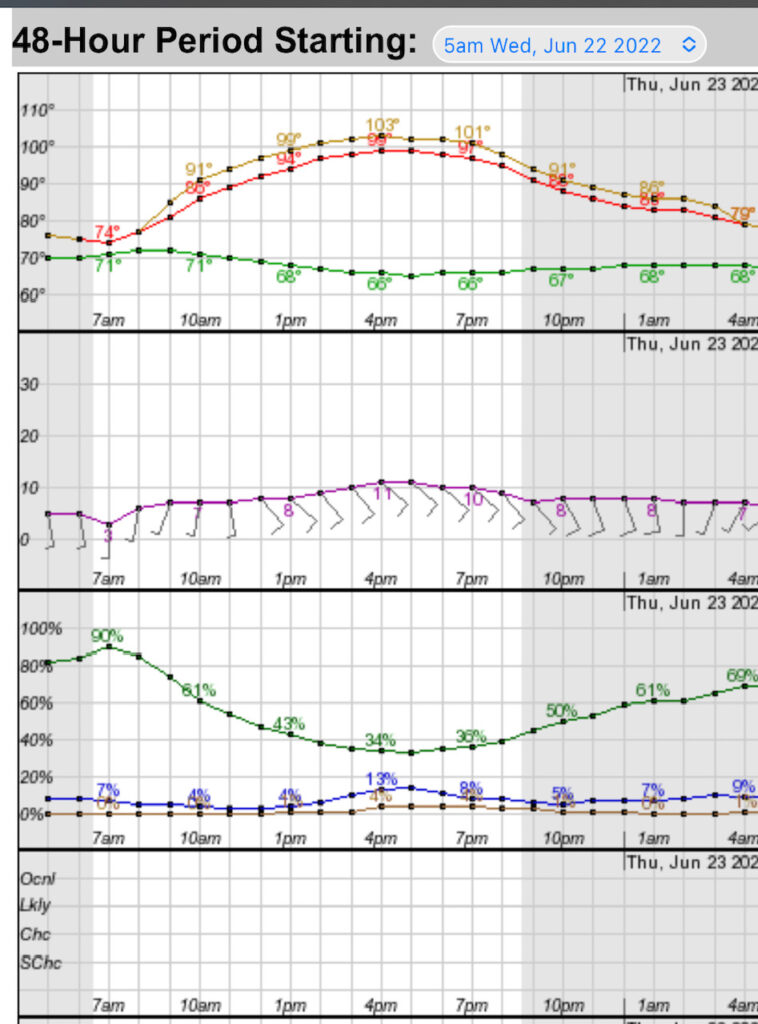