WHO I FISHED WITH:  This morning, Monday, July 25th, I fished with Tom Bohmfalk and his 13-year-old granddaughter, Annika Price.

Tom, a retired physician, was referred my way by Mr. Dwight Stone, a retired restaurateur and friend of Tom’s.  I truly appreciate such “word of mouth” business!

Although I fished with Tom and his two younger grandkids last week, the attention they required prevented a whole lot of conversation.  This morning, we got talk a little more and I very much enjoyed his stories of medical mission work for the cause of Christ with populations of Mexican Indians. 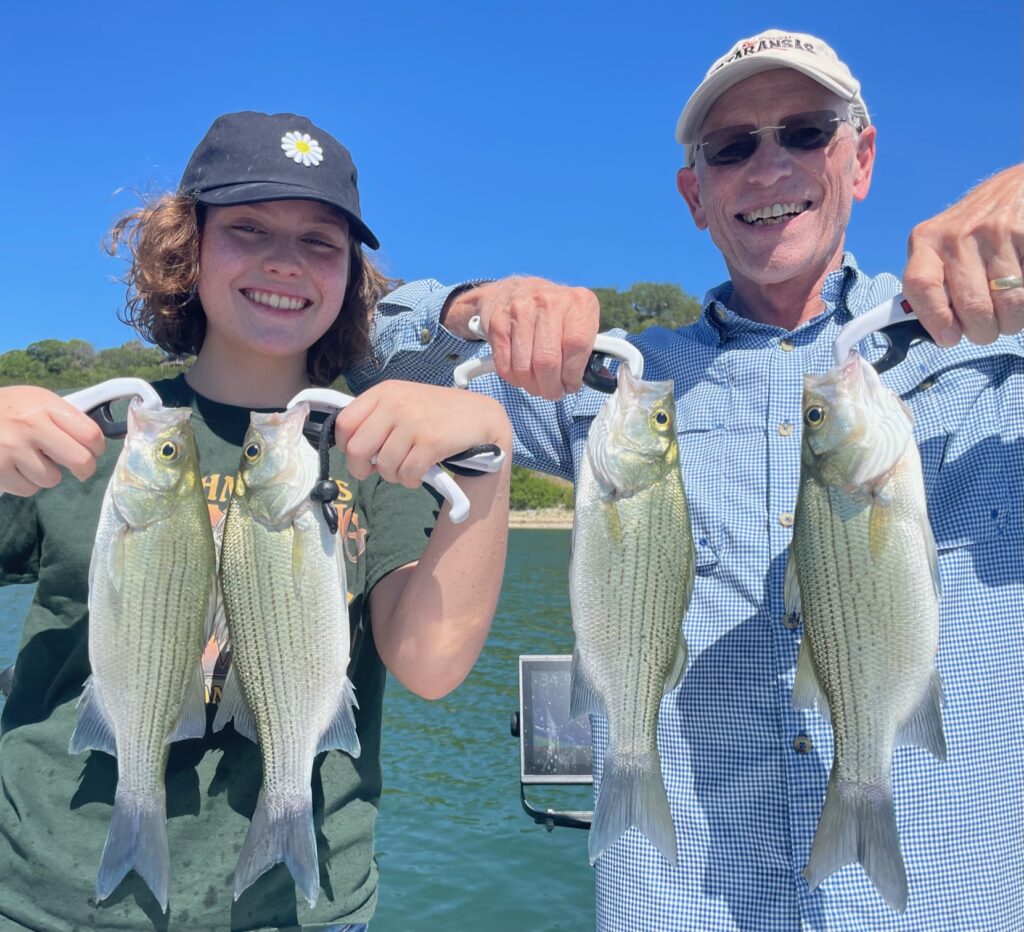 PHOTO CAPTION:  From left: Annika Price (age 13) and her grandfather, retired Dr. Tom Bohmfalk, landed 70 fish on Lake Belton.  We anticipated continued topwater action, but the fish had other ideas.

If you’ve been following my reports, you’ll recall I took Tom and his two younger grandchildren to Stillhouse late last week.  At that time, both Belton and Stillhouse were fishing well, and I chose Stillhouse because the smoking and downrigging tactics I’ve been successful with would not require those younger children to cast in order to be successful.

My plan this morning  was to fish Lake Belton.  With only two anglers aboard, I can run the trolling motor from between my two clients on the front deck as they sight-cast to fish feeding on topwater.  Since Annika is 13, I felt I could get her up to speed on her casting sufficient to allow her to catch topwater white bass consistently.

All that was well and good until the white bass failed to show up!!  Sure, there was the “standard” bit of schooling on top for a few minutes right around sunrise, but the hours-long action we enjoyed last week was nowhere to be found this morning.

So, we took lemons and made lemonade by using the downriggers to catch fish and, more importantly, find large concentrations of fish which we could Spot-Lock atop of and fish vertically for.

We enjoyed two solid episodes of vertical work with downrigging before and after each and worked out way up to a final catch of 70 fish by around the 4-hour mark.

All of our fish on the downriggers (about a dozen in all) came on #12 Pet Spoons (silver, white feather) trailed behind a 3-armed umbrella rig.  All of the fish we caught after finding them on side-imaging while downrigging came on the MAL Dense with chartreuse tail.

During the first bout of “smoking” vertically, as the fish settled down and showed to be thinning out on Garmin LiveScope, I spotted some out to the deeper, port side of the boat.  We worked the same baits with a sawtooth pattern back to the boat with good success until that, too, played out.

OBSERVATIONS:  Topwater action was much reduced versus the “gangbusters” activity of the past 2 weeks.  This morning’s action was limited to just a few minutes right at sunrise, and even that was far from intense.