WHO I FISHED WITH:  This morning, Friday, August 12th, I fished with Mike “Alamo” Hall, Jim Colwell, and Hyde Hanley.  The three have been friends for many years.  When I asked what initially brought them together, the consensus was that their shared interest in motorcycles was the catalyst.

I first met Mike when a mutual friend, Stiles Parker, brought him out for a bit of corporate entertainment.  Mike and Jim later took an on-the-water sonar training course with me.  This morning, Mike brought his buds out to celebrate his 49th birthday.

My next open date will be on August 30th. 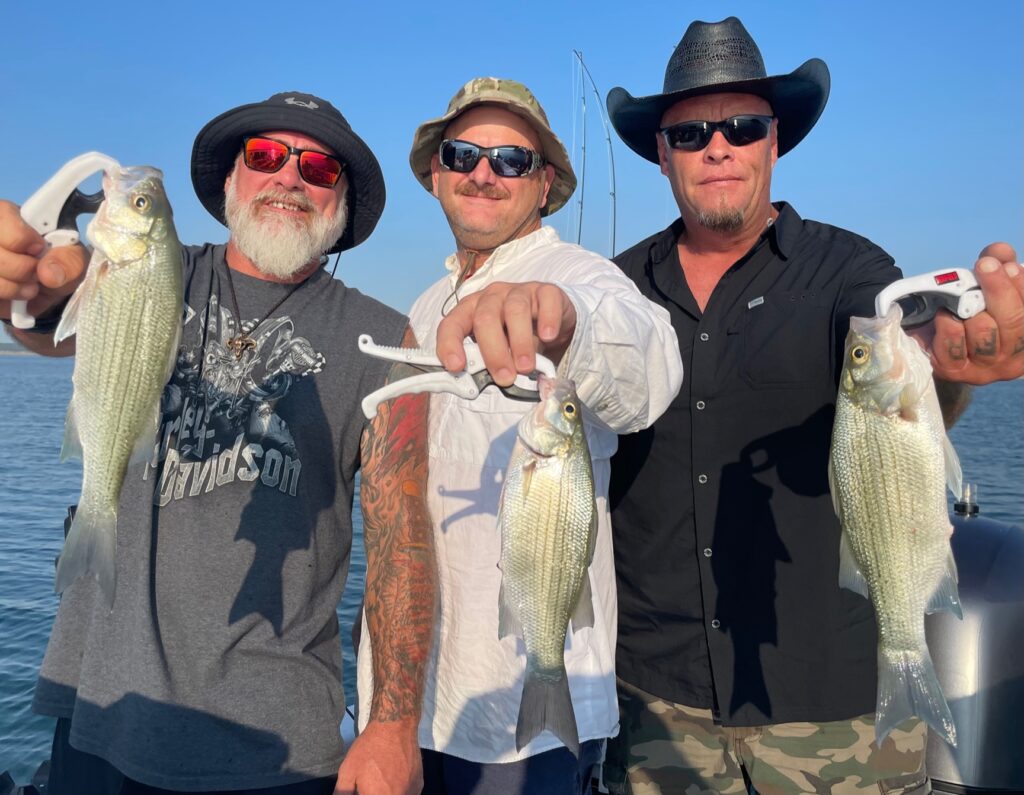 PHOTO CAPTION:  From left: Mike “Alamo” Hall, Hyde Hanley, and Jim Colwell with a portion of their 100-fish catch, most of which came on MAL Dense Lures fished horizontally using a sawtooth retrieve. 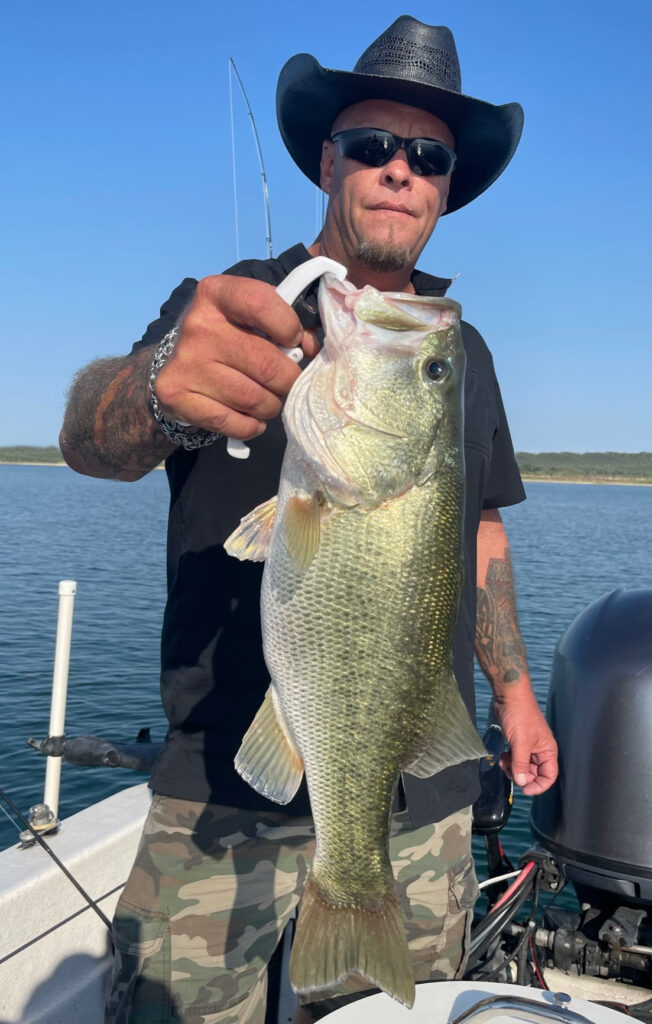 PHOTO CAPTION:  Jim took our single largest fish of the trip.  This 4.75 pound largemouth struck Jim’s MAL Dense as he worked it from bottom upwards using a “sawtooth” tactic in ~47 feet of water.  This was one of three legal largemouth bass we caught and released.

There were some significant hurdles to clear this morning.  First, we had calm winds, second, we had a full moon, and third, we had cloudless, post-frontal skies following Wednesday’s mild cold front which push to and through Central Texas.

Our first hour was pretty quiet.  I covered a lot of ground, found a lot of bait, but the gamefish were tough to come by.

The surface of the lake was like glass all morning, so, when a fish splashed, it could be seen, literally, a mile away — further with a spotting scope.  Once the little “schoolie” largemouth began to pop shad on the surface here, there, and everywhere, things began to happen.  Those largemouth were like a visible barometer of what was going on under the surface, as well.

Once we found fish around 8AM, we never had to go more than about 300 yards one way or another to stay in them.

We started out fishing MAL Dense Lures vertically thanks to the thick school of fish I’d come upon which stayed right beneath our boat for a while.  Everyone caught a few, but, as has increasingly been the case, the fish fairly quickly turned off to this tactic.  While Hyde continued to work vertically for fish he could see on the Garmin LiveScope, I had Jim and Mike casting out horizontally toward the deeper, starboard side of the boat as I could see, literally, hundreds of fish slowly patrolling over the gently sloping bottom up to 100+ feet in that direction.

We sat in that location, and one other near it, and put 76 fish in the boat.  The vertical approach accounted for perhaps 1 fish for every 6 that were caught horizontally.

With about an hour left in the trip, I offered that we could change over and do some downrigging so the three men, who had at the start of the trip let me know that learning how to catch fish was more important than actually catching them, could be exposed to one additional facet of summertime white bass fishing.  We ran two downriggers, each with 1 umbrella rig.  Three #12 Pet Spoons were attached by fluorocarbon leaders to each umbrella rig.

In that final hour, we took another 24 fish and, right at the 4-hour mark, notched our 100th fish for the morning and wrapped it up as it was getting uncomfortably hot.

Our 100 fish tally included 97 white bass, all of legal size, as well as 3 legal largemouth, with the largest going 4.75 pounds.

OBSERVATIONS:  The white bass’ preference for horizontal movement over vertical movement was quite clear this morning, for the second day in a row.  I suspect “thermal squeeze” is the root cause, keeping the fish confined to the cooler water just above the thermocline.  I suspect they are reluctant to rise up into increasingly warm water nearer the surface. 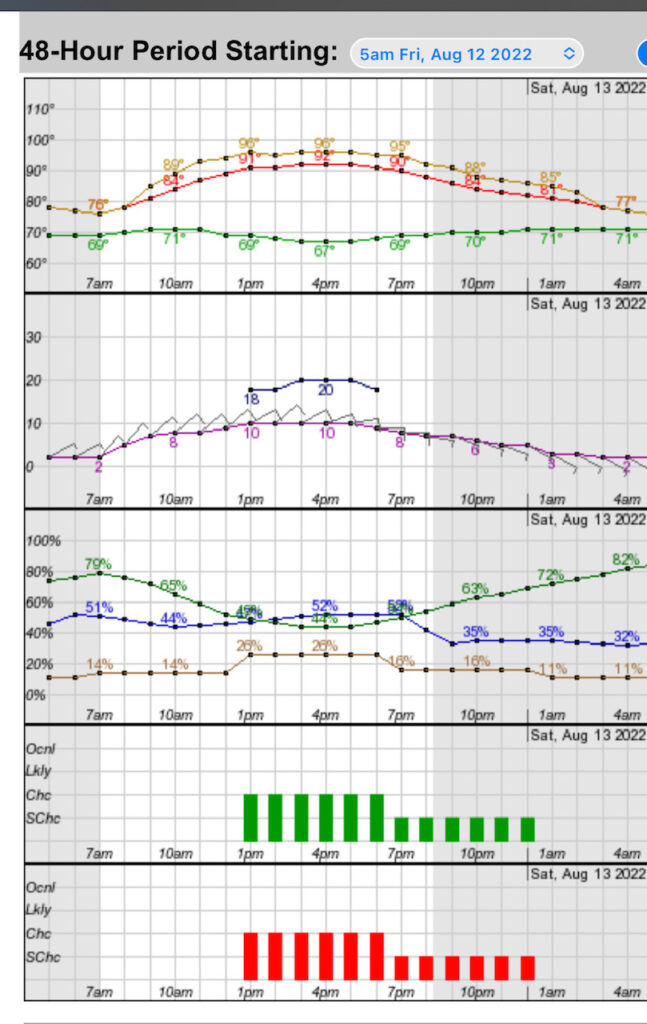